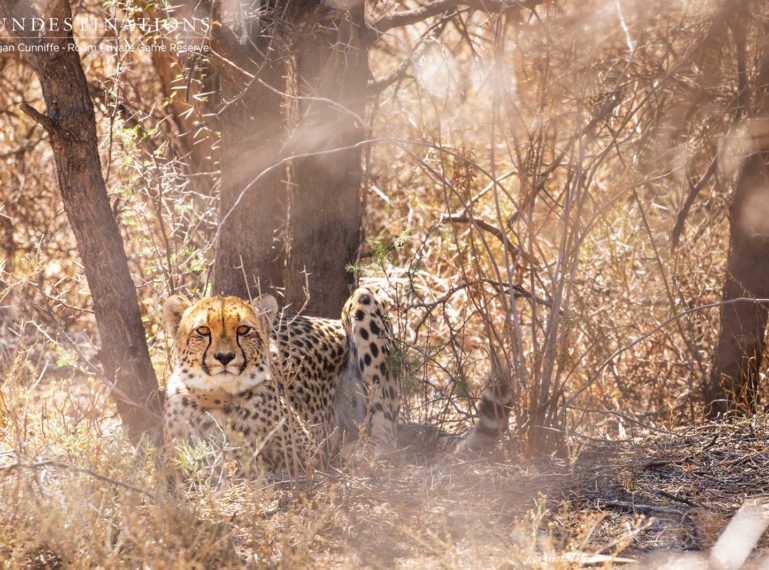 Almost a year ago a coalition of slender male cheetah were released into Roam Private Game Reserve. The Endangered Wildlife Trust (EWT) and the team from Roam decided to re-introduce cheetah into an area that once formed part of their historic range. The current coalition have adapted well to their environment, and are in perfect condition. Last year, discussions were underway last to introduce a female into the reserve at a later stage. That “later stage” is now ! A week ago the team at Roam released a female cheetah into the Great Karoo. She will be in the boma area until she becomes more comfortable in her environment. In the next few years we will – hopefully – have a few cheetah cubs born into the reserve.

We chatted to Don about the new female cheetah, and gained a bit of insight into her history – peppered with a few humorous answers. Photographer Teagan Cunniffe was there to take photos of the current coalition and the rather shy female newcomer.

“Flanked by the Cape fold mountains and hugged by undulating endless desert landscapes, lies the 5000 hectare Roam Private Game Reserve. The unique scrubveld of the Karoo basin gives rise to various xerophytic flora, and is also home to abundant species of plains game, birdlife and small predators. The arid plains are dotted with a wealth of geological masterpieces such as archetypal Karoo koppies, sandstone and dolerite intrusions. With so much to offer in terms of providing endless natural habitats, the area was analysed and identified as being a potential location that could sustain the presence of cheetah. After considerable time and much research, the owners of Roam – together with leading conservationists – decided to introduce cheetah into the reserve.”

Where did the cheetah come from?

The female has come from Rietvlei near Pretoria. However, we are pretty sure she doesn’t support the Blue Bulls or listen to Kurt Darren!

Why was it necessary to introduce a female cheetah into the reserve?

Roam’s goal with introducing cheetah to the Reserve is not only to offer views of these stunning animals to our guests, but to contribute to the conservation of these animals. Two lone males are going to have no conservation value at all. Introducing a female will hopefully mean we get cubs in the future.

These cubs will then be introduced to other reserves when they reach maturity.

Where is the female now, and how long will it take for her to join the males?

She is in our predator boma at the moment. She will be kept here for about 6 weeks so we can monitor her closely and allow her to settle into the new environment. Any longer in the boma and cheetah start to loose muscle condition.

How often will you monitor her?

Whilst she is in the boma someone will check in on her daily. And this will continue for a few months after her release onto the main reserve as well.

How quickly do you think she will produce cubs?

With luck within 18 months.

How old is she?

Will you introduce more females into the reserve at any stage?

Not until the drought has broken, and we can better understand what impact the cheetah are having on the prey populations.

Does she have a “personality”, or is too early to tell ?

When she arrived in the transport crate she was certainly very cheeky and let us know this when we opened the crate up. Since then we have given her some space in the boma to settle down, but I some how feel she will always be a little feisty. She will need that attitude to survive the Karoo! 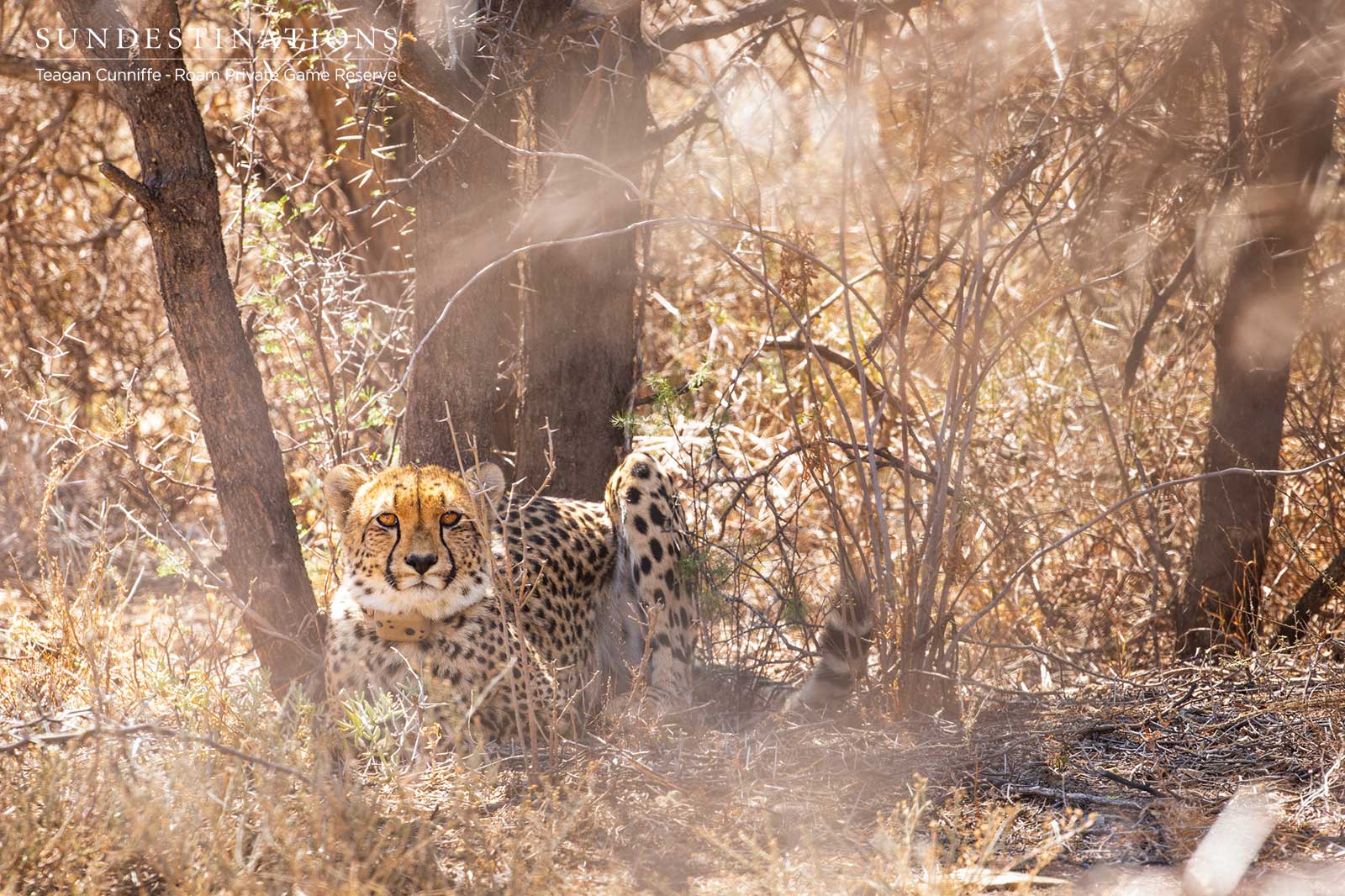 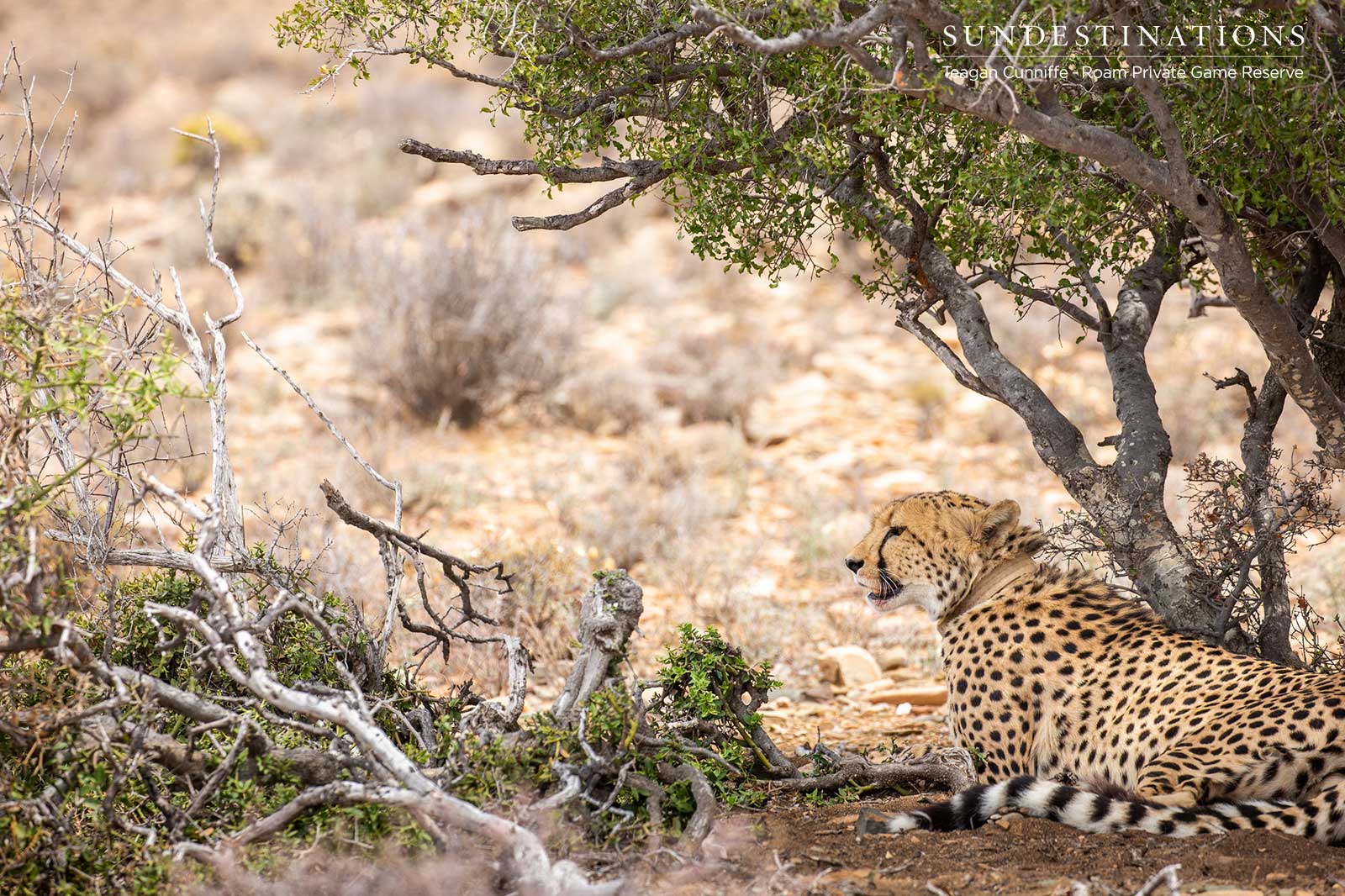 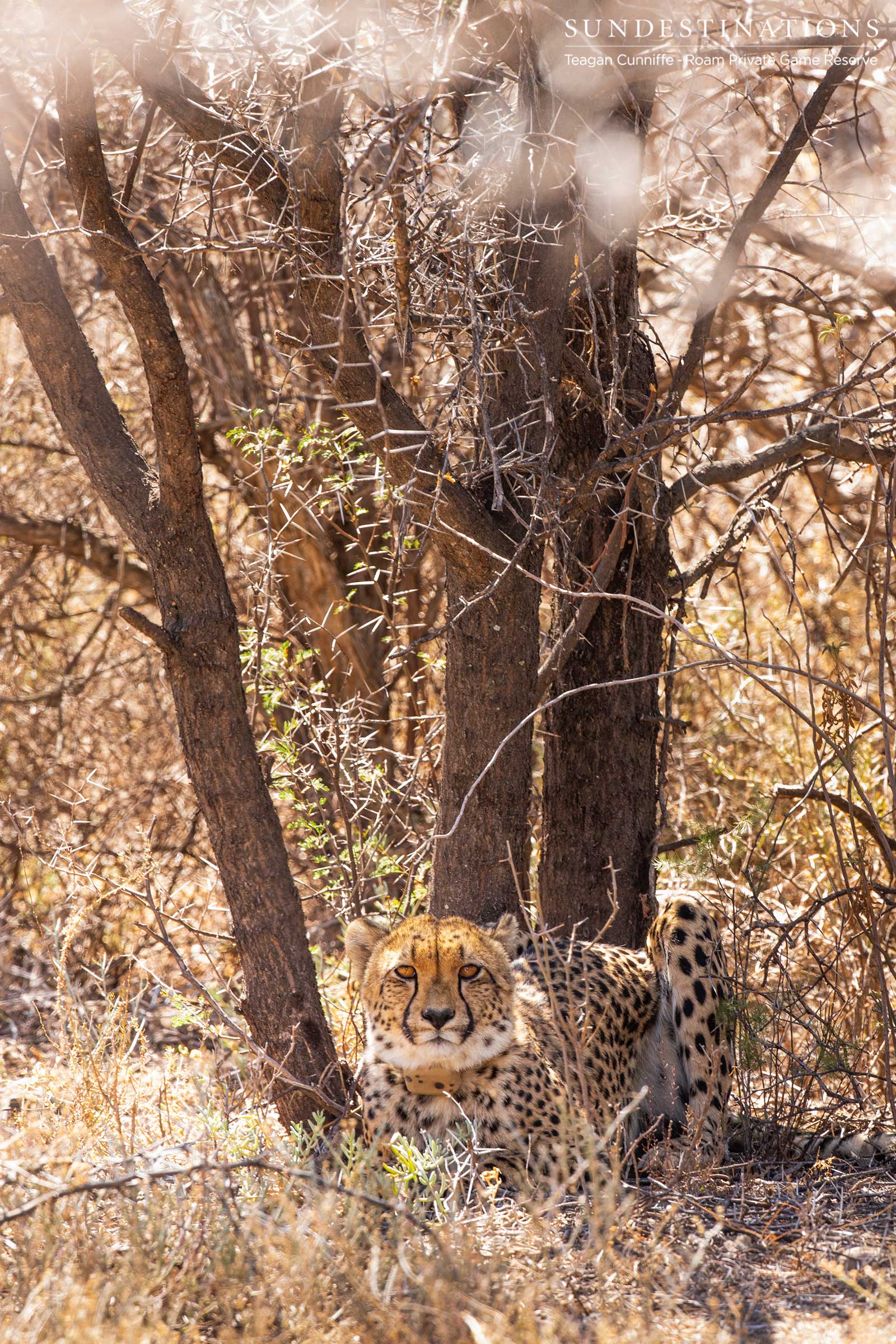 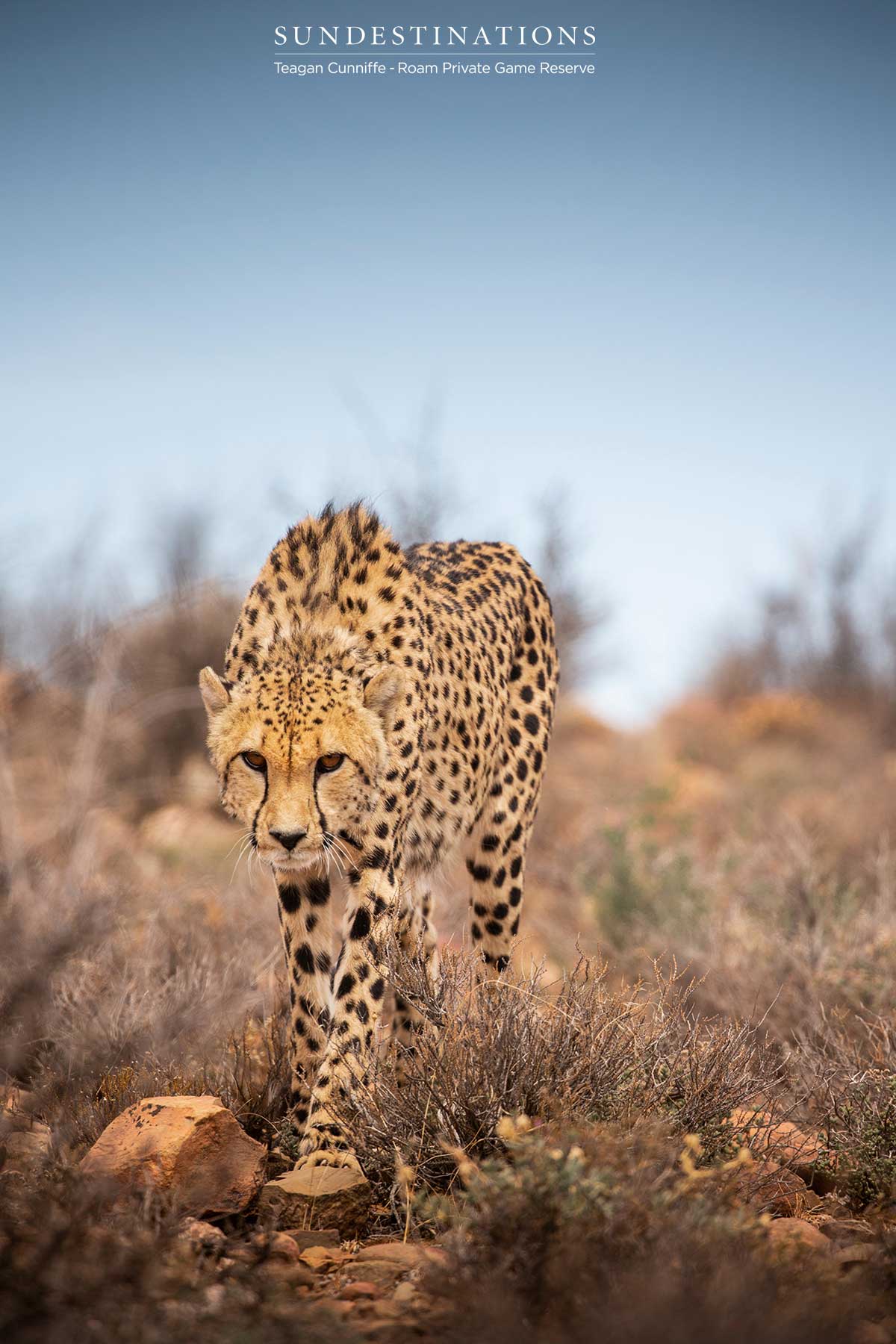 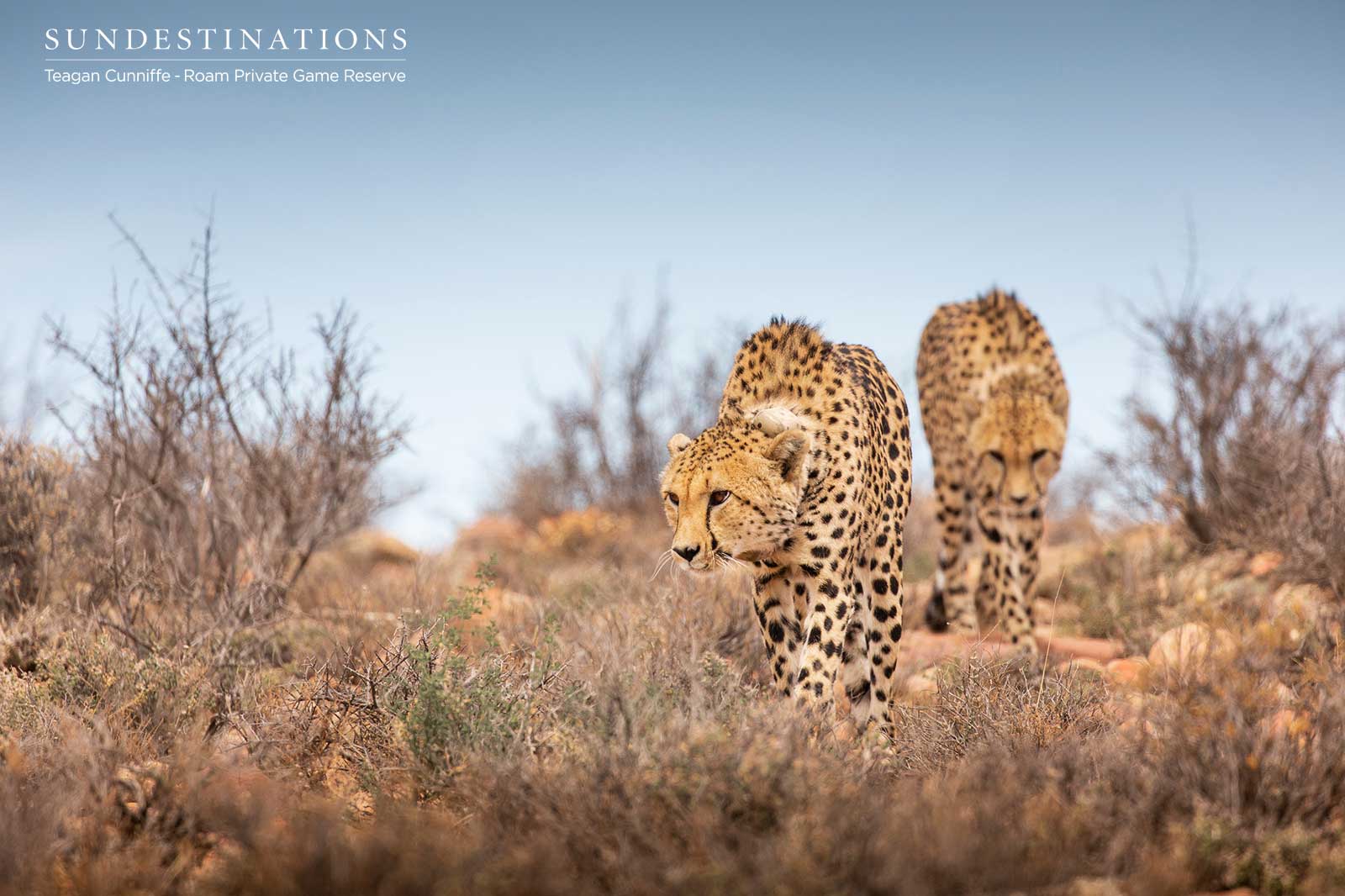