Battle of the Klaserie Continues: Mabande vs Trilogy 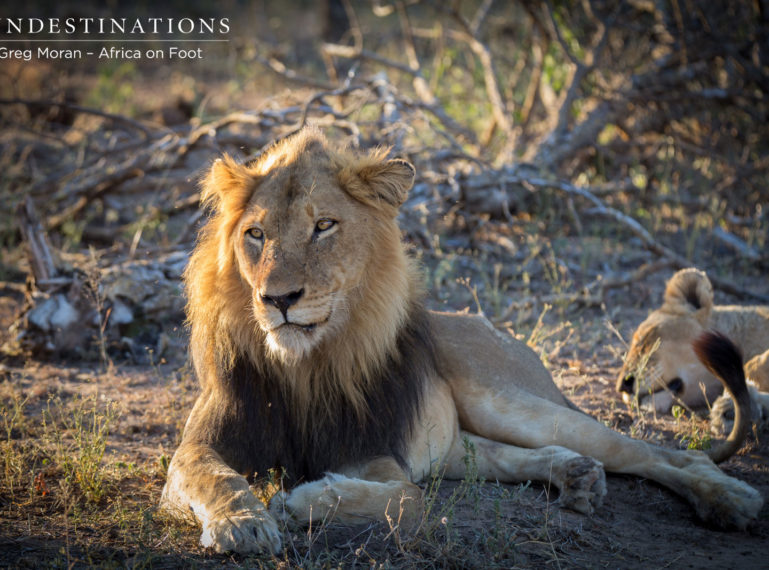 Yesterday we flew in with reports and updates about the Mabande male lion. You remember him? He’s the nomadic male who has spent the past few weeks patrolling and marking new territory. During the course of last week, he had a huge showdown with the Trilogy lions, the dominant males of the area.

So, what’s the latest in the Mabande vs Trilogy saga? Well, Mabande was relaxing close to Buffelsdam and managed to give guests a brief sighting. He even engaged in a bit of rolling back and forth to entertain his onlookers. After his fight with the Trilogy, he went scurrying away but now it appears his confidence his back up. Clearly last week didn’t deter this potential king, who wants the Klaserie and the Ross girls for himself.

Although Mabande lay low for a while, he certainly didn’t go running for the hills. He spends plenty of time patrolling turf, scent marking and covering huge ground. Guests from nThambo Tree Camp have actually spotted him casually strolling past camp. He was also seen just outside the ranger’s block at Africa on Foot.

Is this not a dangerous situation for Mabande? Returning to Trilogy traverse? The absolute brazen attitude of Mabande surely is a sign of a burgeoning and brave leader!

So, after being spotted at Buffelsdam, Mabande subsequently left the area because one of the Ross Pride Breakaway lionesses was contact calling. He moved off in the general direction of the calls. The next sighting was of one of the Trilogy males mating with Ross girls!

The following day, the nThambo team spotted one of the Trilogy males just relaxing by himself. Believe it or not, while nThambo were with the handsome Trilogy male, the Africa on Foot team were observing the Mabande male mating with one of the Ross girls.

It’s getting very risky out there in the Klaserie. The competition for females is strong and you can slice the tension in the air with a knife. Thus far, two males, one turf. Things are inching closer to a battle of the Klaserie – Mabande vs Trilogy.