Check out the Cheetah! Game Drive Winner in Klaserie 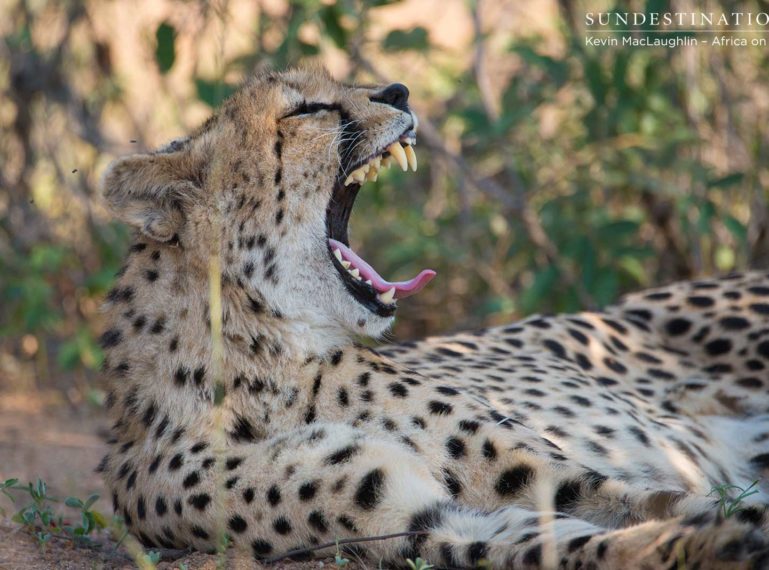 Nothing beats a cheetah sighting first thing in the morning! These rarely seen, sleek cats are a real bonus on any safari, and the nThambo Tree Camp game drive this morning was destined for greatness. At Africa on Foot, guests had set out on a walking safari, and when word spread of the solo female cheetah nearby, Ranger Ryan changed direction and led his guests back to their vehicle so they could drive to view the cheetah, too. As much as we believe a morning walk in the wild Klaserie is the best way to start the day, we wouldn’t want our guests to miss out on this very special sighting! The cheetah was relaxed and enjoying the shade in the classic cheetah pose: outstretched on her side with her head raised off the ground, keeping an eye on her surroundings. Female cheetahs are most often found alone, as they generally live solitary lives, unless they have a litter of cubs. Cheetahs are famously good mothers, and they commonly have litters of about 3-5 cubs, which stay with their mother until about 18 months old. Once the cubs have matured and move off on their own, the mother returns once again to her solo lifestyle. Guests watched the single lady panting, yawning, and snapping at flies as she reclined in the shade, blinking her big amber eyes at us. Eventually, she got up and stretched and walked off into the thicket. Cheetahs hunt during the day, unlike leopards and lions who prefer to hunt at night, so perhaps we will find her later this afternoon with a full belly! The temperatures during the day are still high, so the cheetah might spend the afternoon lying low and conserving her energy until dusk before she attempts to hunt. We will be holding thumbs, hoping that the day ends as well as it began, but could we be so lucky? Let’s wait and see…

Take a look at the last cheetah sighting our guests enjoyed, here!