Everything you need to know about Chimpanzee Trekking in Uganda 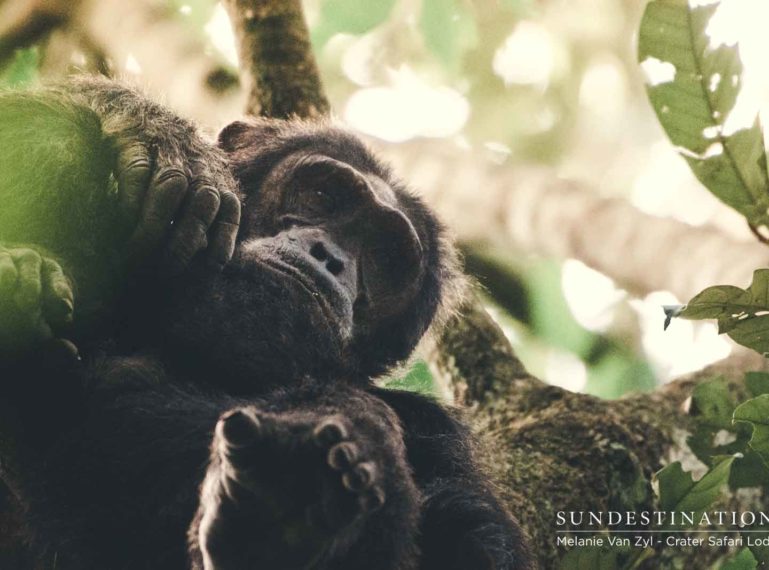 Pegged by Lonely Planet as “one of the world’s greatest wildlife experiences” and ranked by Responsible Tourism UK as “one of the most underrated things to do in Uganda” chimpanzee tracking remains one of East Africa’s unsung activities.

Often outshined by gorilla trekking, seeking our closest relative through Uganda’s enchanting swathe of thick equatorial rainforest is just as thrilling an experience. Plus, it costs a fraction of the permit price.

Where can I find Uganda’s chimpanzees?

WWF identifies chimpanzees as a priority species – one of the most ecologically, economically and/or culturally important species on our planet. Uganda is home to the Eastern Chimpanzee (it can also be found in the Central African Republic and DR Congo, Burundi, Rwanda and western Tanzania) and the world population is estimated at anything between 181000 to 256000.

They are the most abundant and widespread of the great apes, but chimps are still classified as ‘Endangered’ on IUCN’s Red List due to the threat of poaching, infectious diseases and habitat loss.

Kibale Forest National Park in Uganda (roughly 300km away from the capital, Kampala) is one of the best and easiest places to see chimpanzees in their natural habitat. Originally gazetted as a forest reserve in 1932, Kibale was upgraded to national park status, and extended southward to form a continuous corridor with the Queen Elizabeth National Park in 1993.

Today, the forest provides protection for over ten primate species (a total of 14 if you take into account us humans) including some 1500 chimps. Boasting such impressive numbers, the highest diversity and density of primates on the entire continent, Kibale easily claims the title as the primate capital of the world.

Just as in Bwindi Impenetrable Forest National Park, at Kibale (pronounced chibale) Forest National Park visitors can join daily tracking walks with experienced Uganda Wildlife Authority Guides. There are two chimpanzee excursions to choose from: a half-day trek, which departs twice a day (at 8am and 2pm) or a full day habituation experience, where you’ll follow a chimp community that is currently undergoing the two-year habituation process.

As a whole, chimpanzee tracking is not as challenging as gorilla tracking because the bush is not as thick, but still be prepared for some brisk marching. Although many beautiful photographs depict chimps lazing about in trees, they sure are speedy on the ground too. Unlike gorillas, who tend to sit and feed, chimps are social creatures that race about the tree tops. Their haunting quarrels, screeches and whooping are sure to stay with you long after the hour in their company is up.

While searching the canopies and forest floors for chimps, ensure you keep an eye out for other precious primates too, such as the red colobus, black-and-white colobus, olive baboons and rare L’Hoest’s monkeys.

Kibale is also host to plenty of other forest wildlife and 70 mammal species in total. Elephants, bush pigs and antelope roam between the 350 recorded tree species. Birders will also delight in the 375 recorded bird species, with specials such as the African grey parrot. It’s also possible to book a birding-specific nature trail with guides at Kibale Forest National Park.

The dry season is generally deemed the best time of year for visiting Uganda. There are two: generally from November to February, and again between June and August. Crater Safari Lodge enjoys a temperature that varies from cool to cold. Climate is mild and temperatures are fairly consistent. On average, day temperatures reach 25°C and at night it drops to 10°C.

What to pack for chimpanzee trekking

Wear your trusty, worn in (and preferably waterproof) hiking kit. The gear you need for tracking chimps is similar to that required for gorilla trekking.

Also read: Our foolproof, tried-and-tested list to use while packing for gorilla trekking.

Wear walking shoes with good grip, suitable for muddy slopes and don’t forget rain gear. Weather in the forests is highly unpredictable. Bring enough drinking water (chimps move quickly and you’ll soon be sweating trying to keep up) and snacks. Carry a pair of binoculars. Chimps like to forage in the highest canopies and binocs will certainly amplify your first glimpses of these fascinating creatures. Also pack insect repellent and long socks to keep the smaller critters at bay.

Where to stay for chimpanzee trekking

Crater Safari Lodge is within close proximity to the acclaimed chimp trekking destination of Kibale National Park in a gorgeous setting. The lodge boasts incredible views of a crater lake and is surrounded by abundant coffee and tea plantations.

Chimp trekking, outdoor activities, such as canoeing or hiking, plus numerous cultural activities can be booked during your stay. 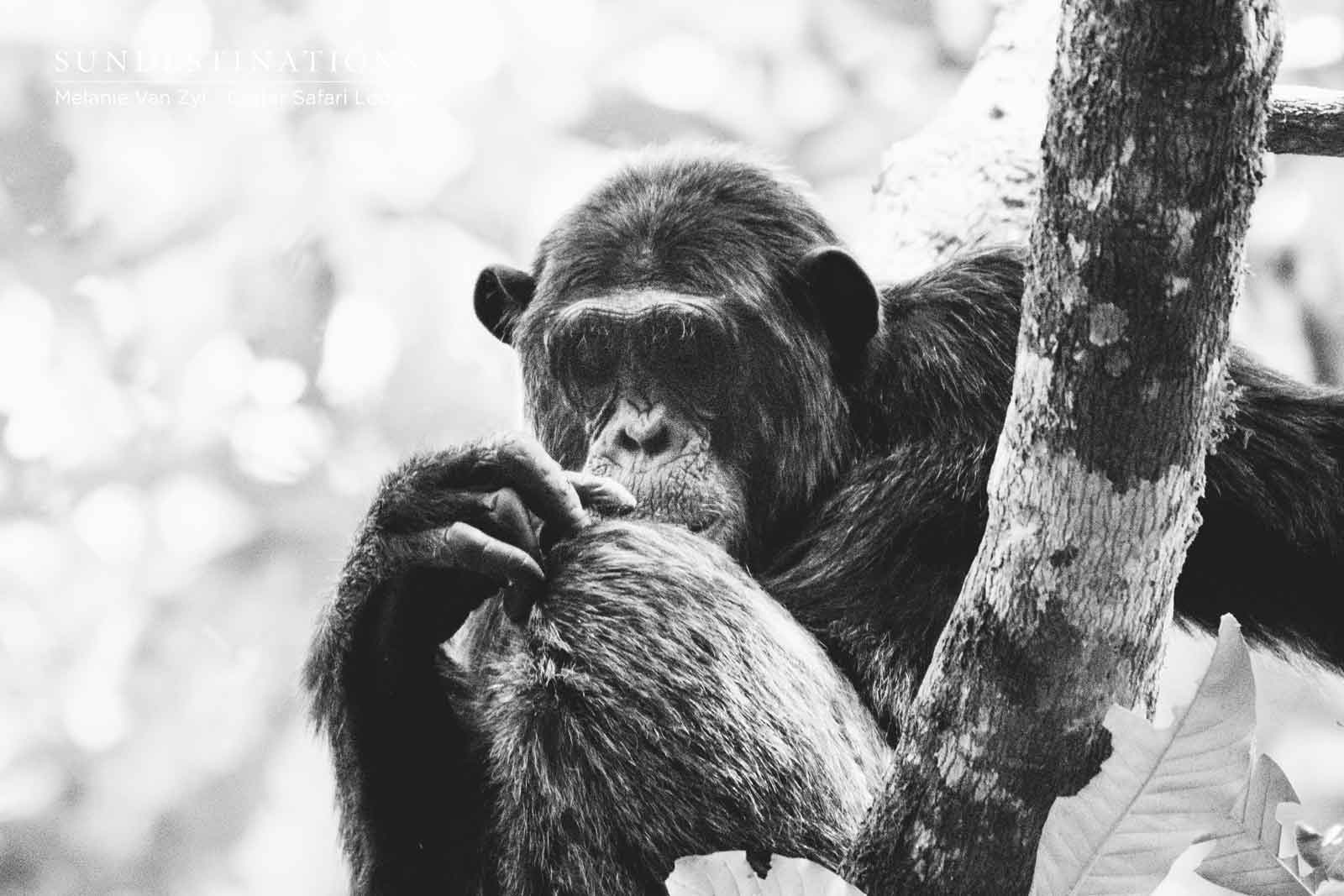 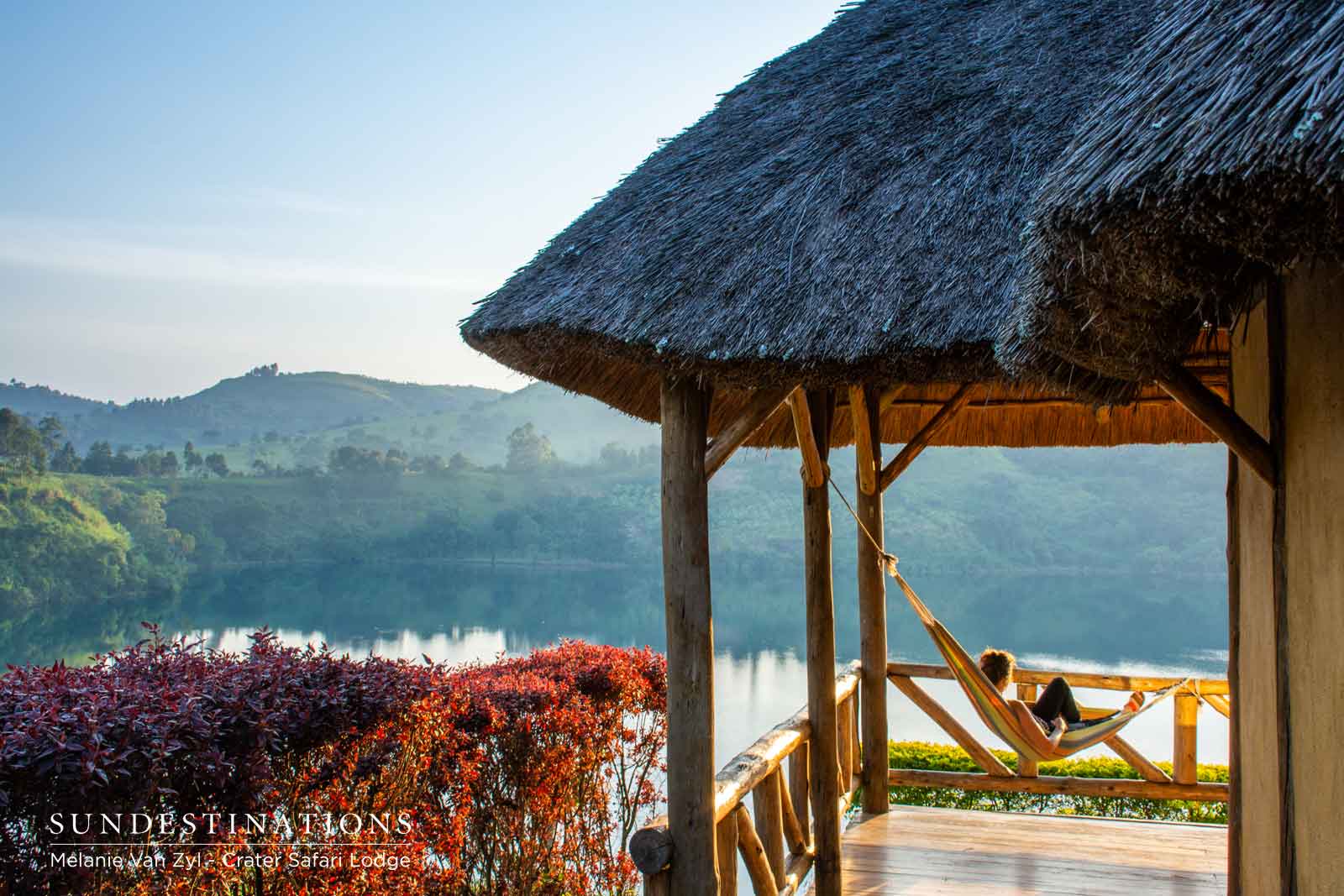 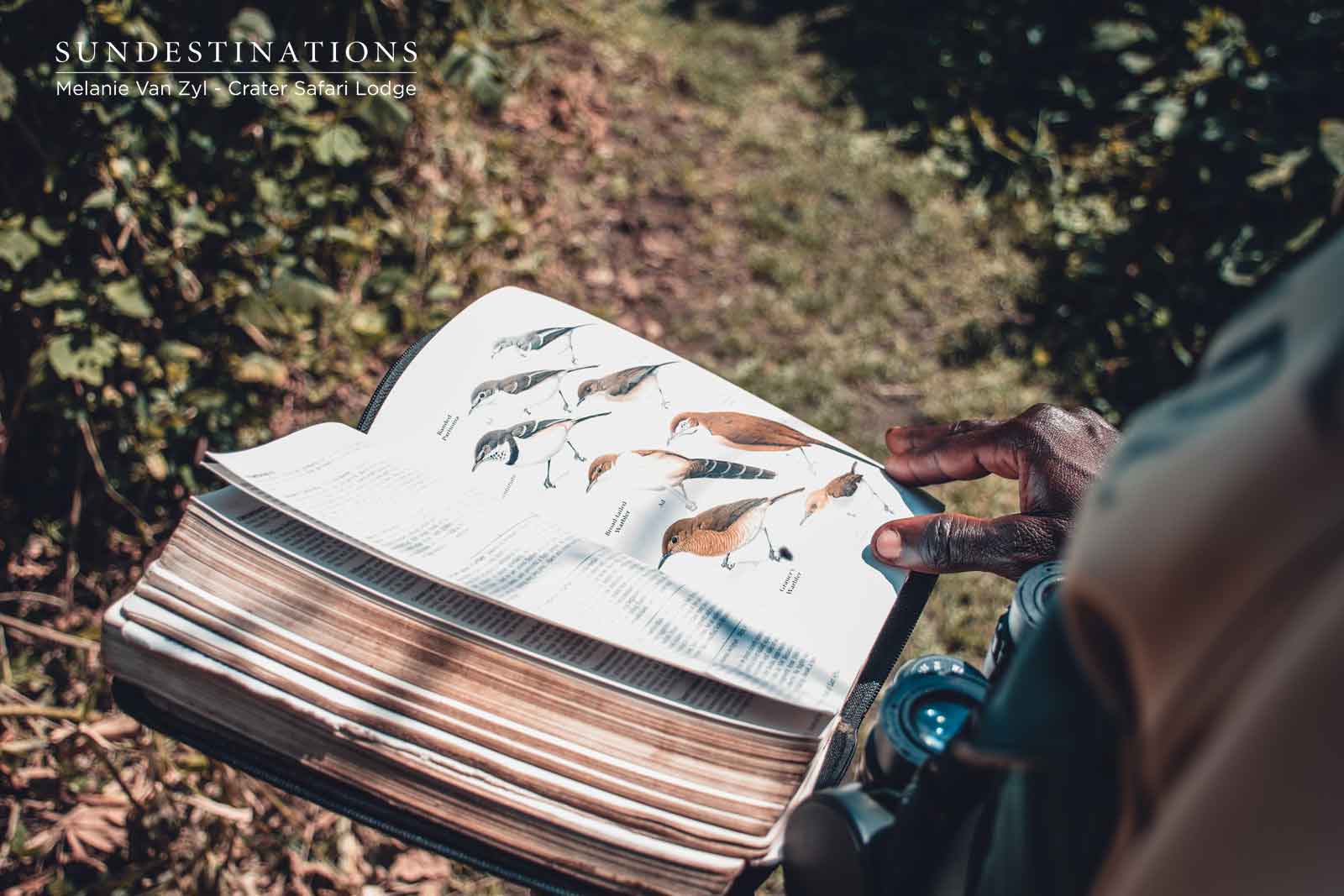 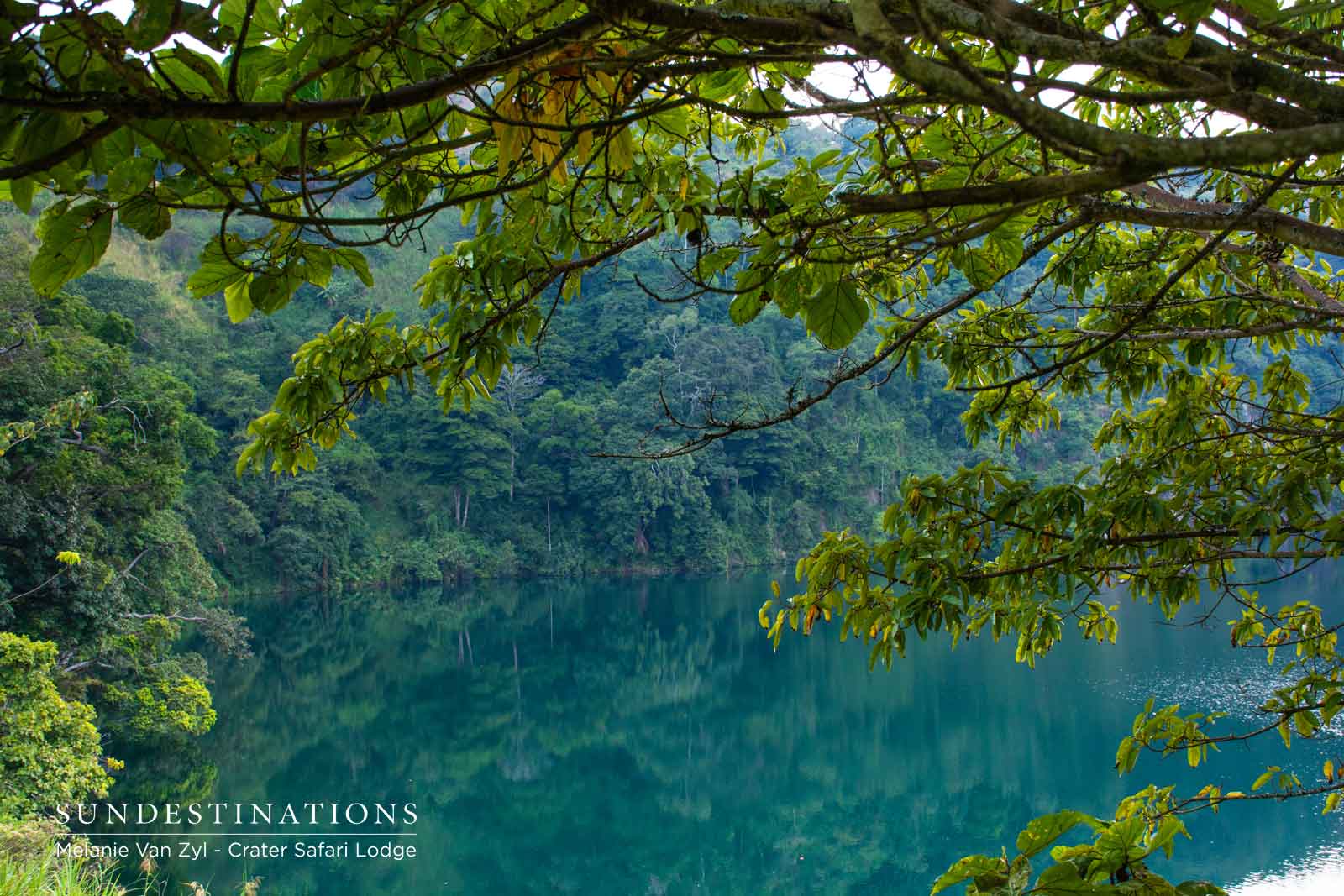 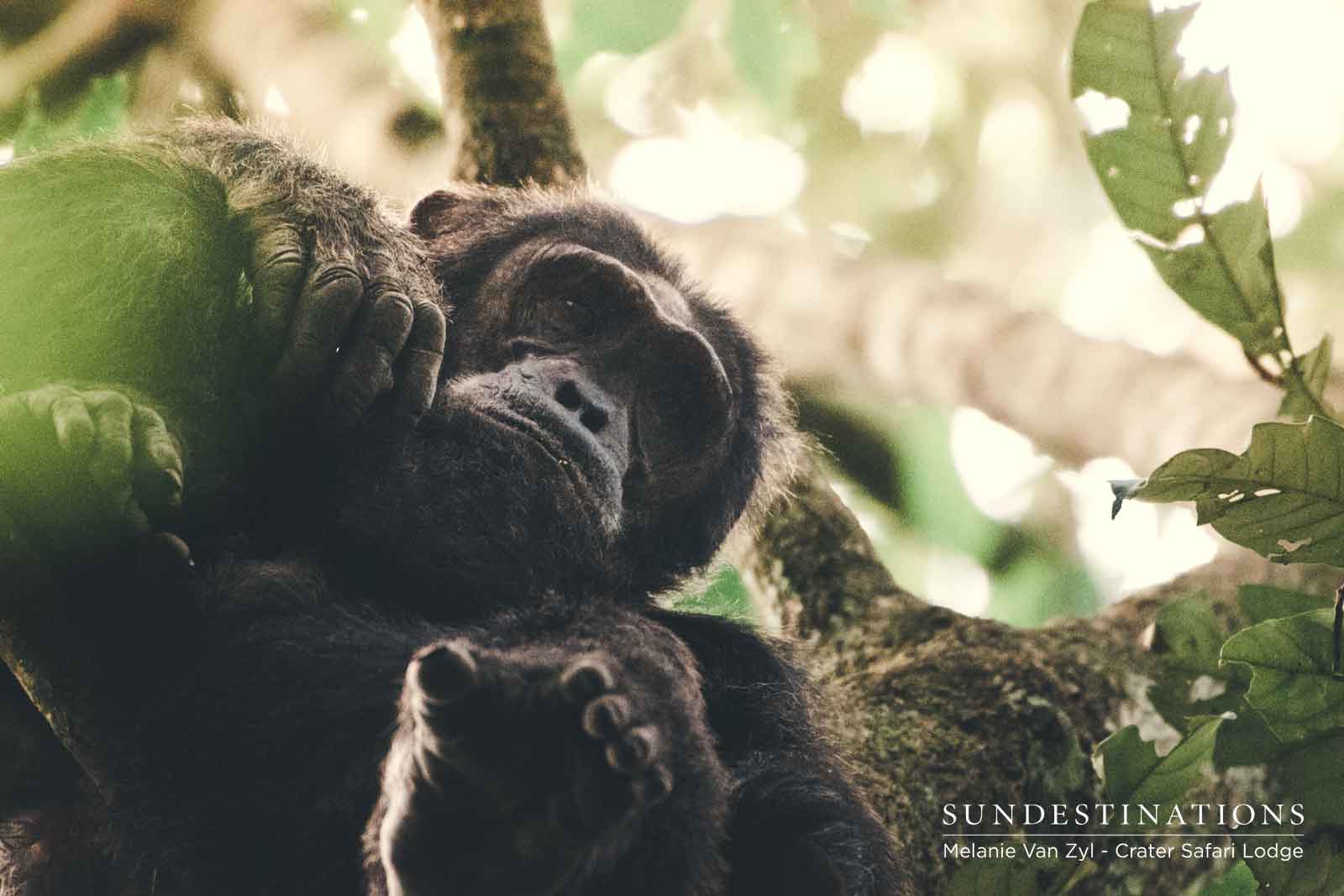 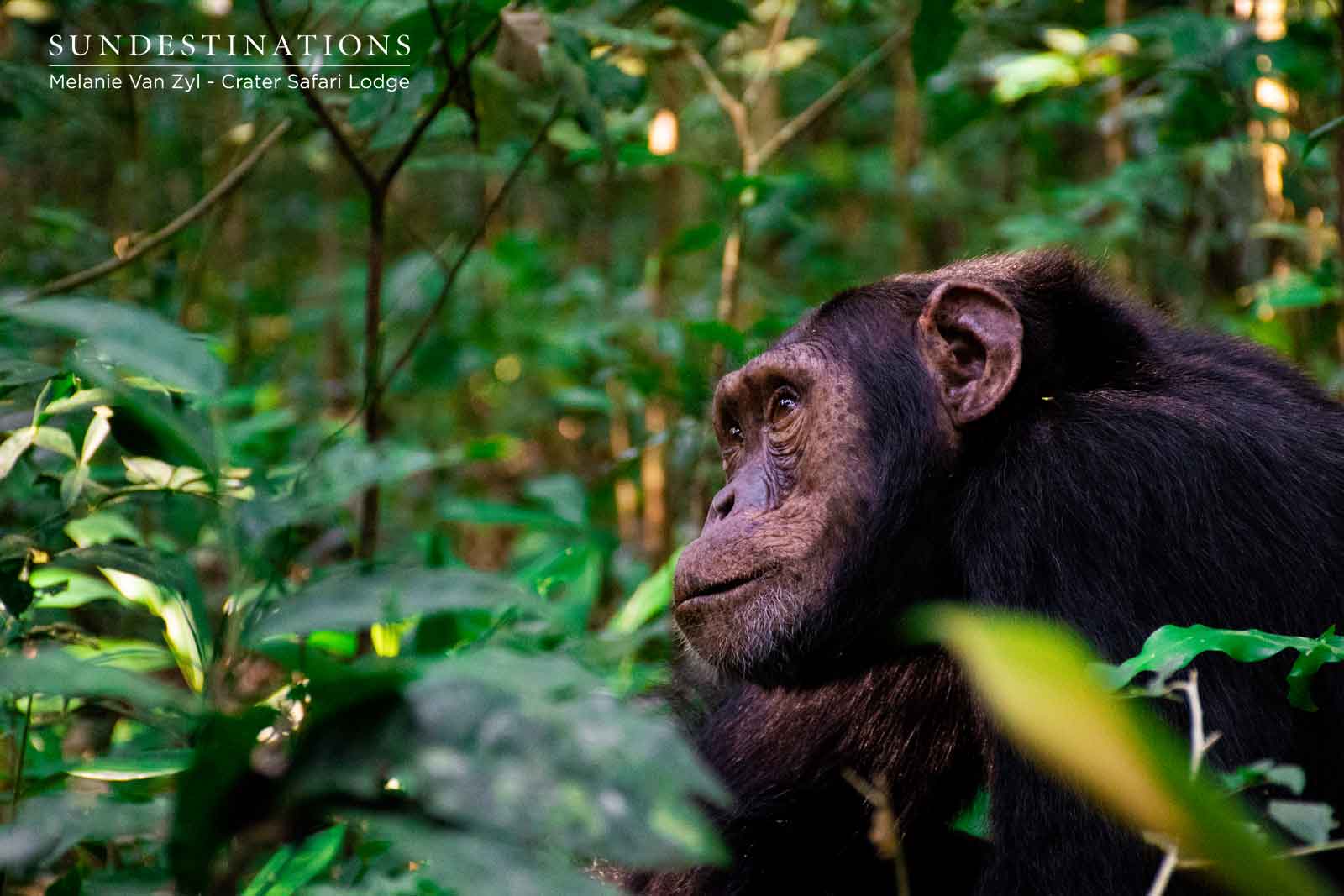 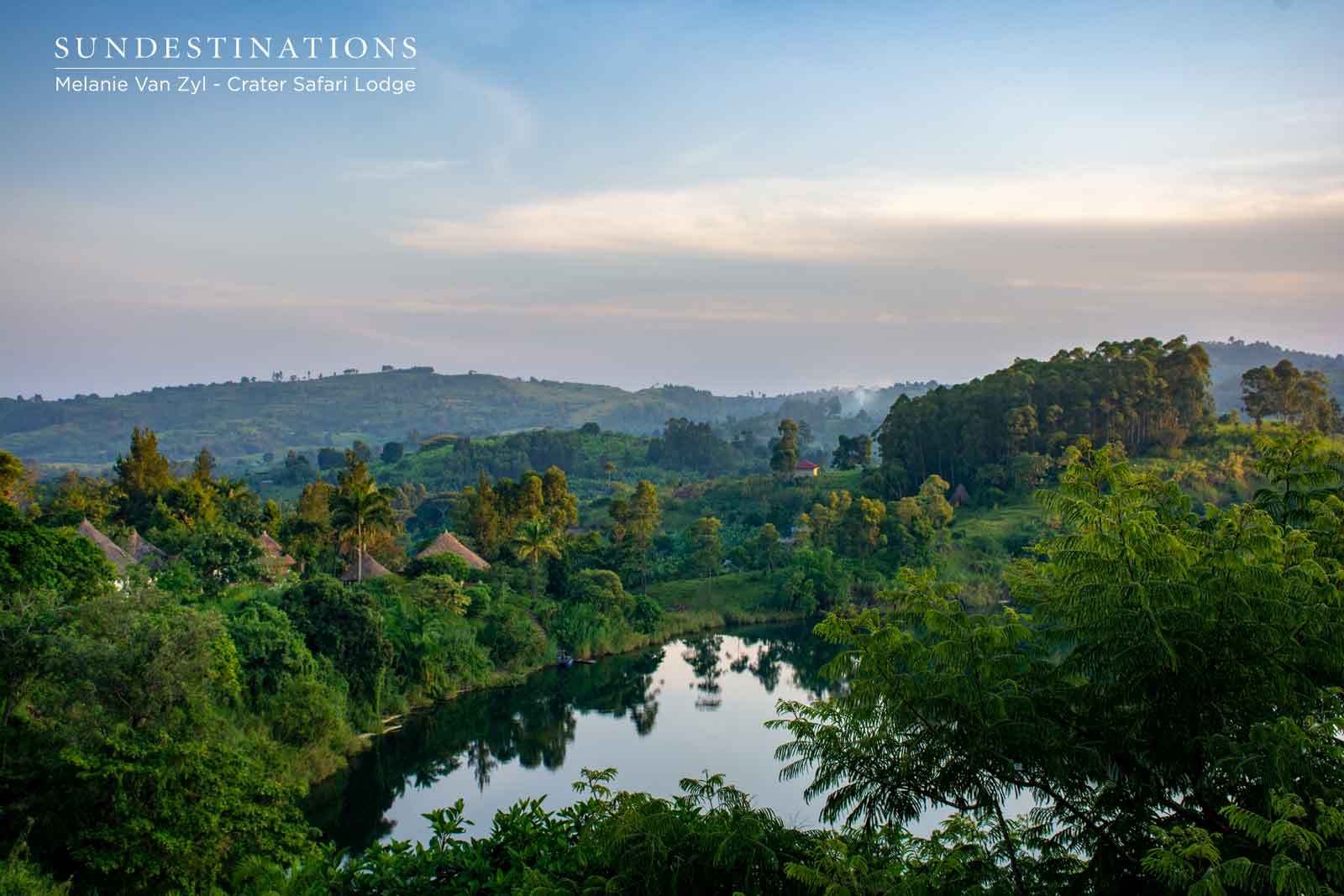 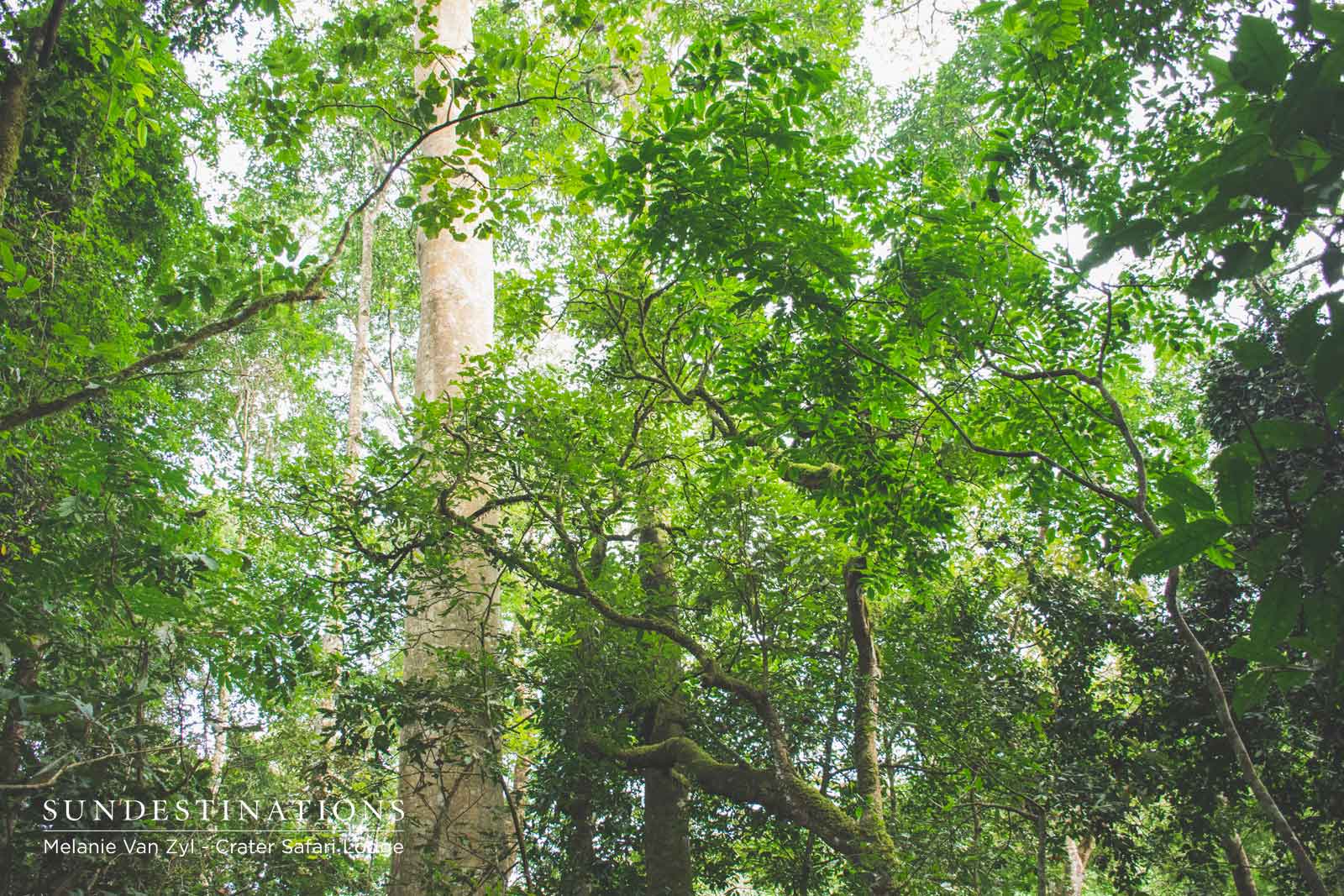 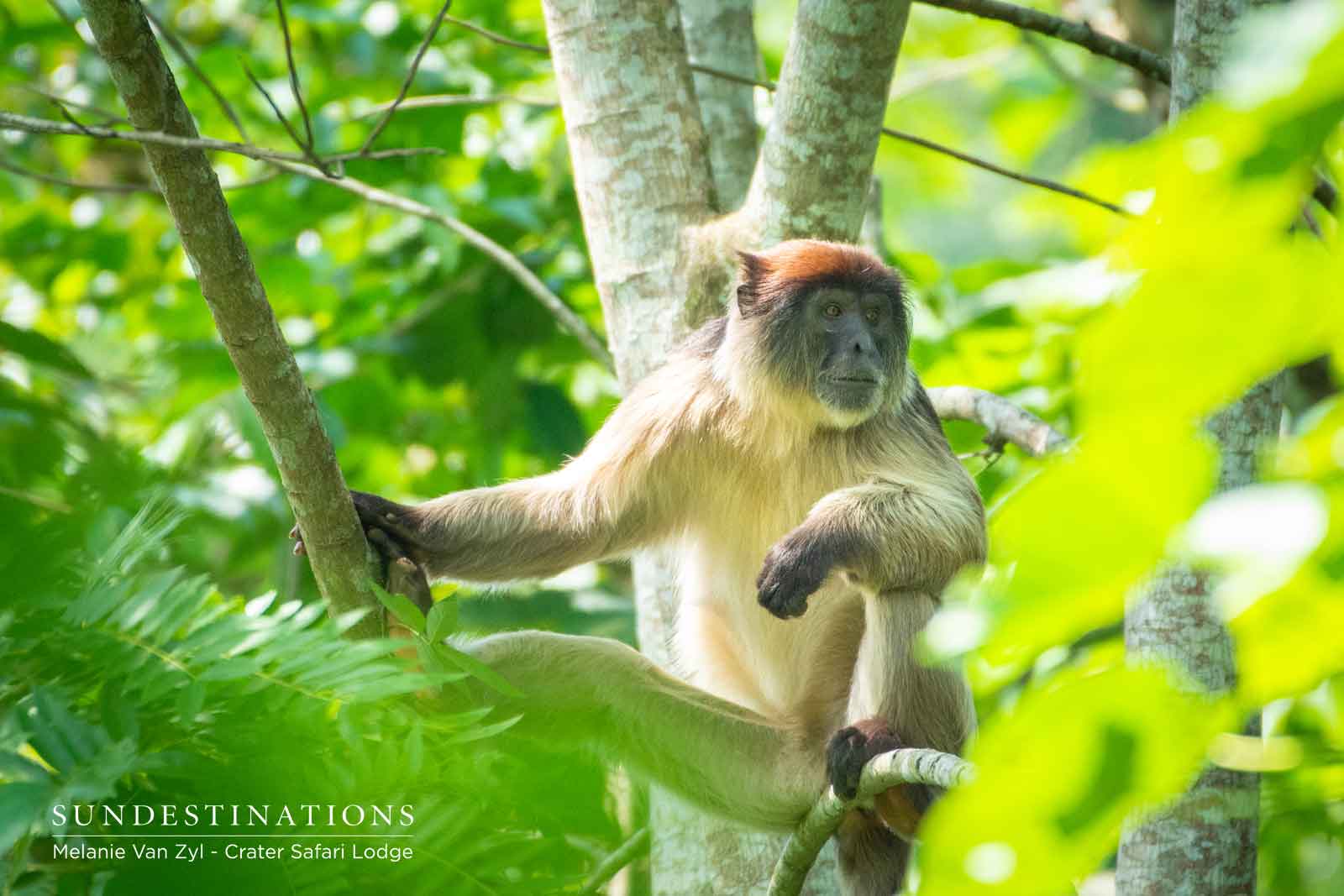 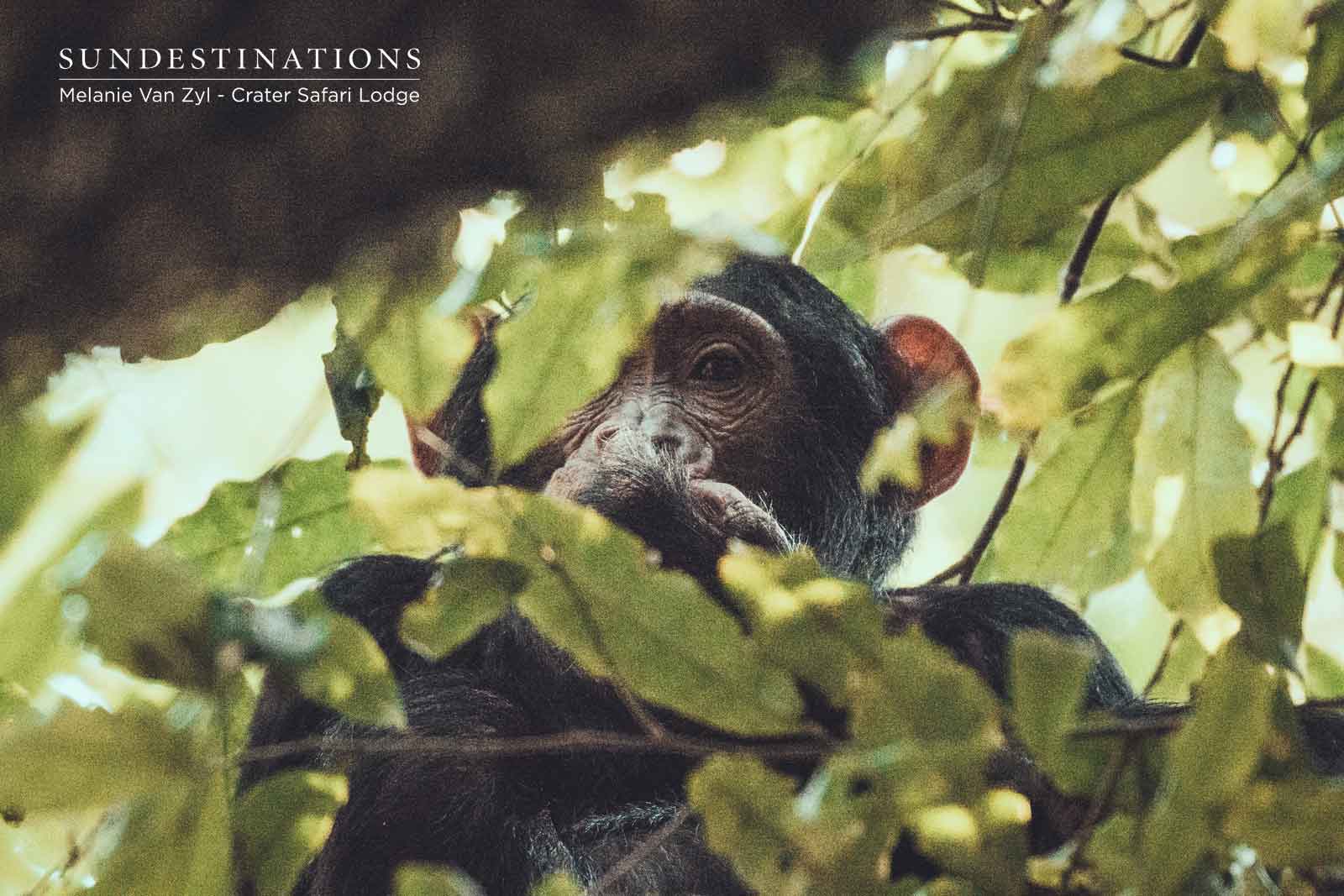 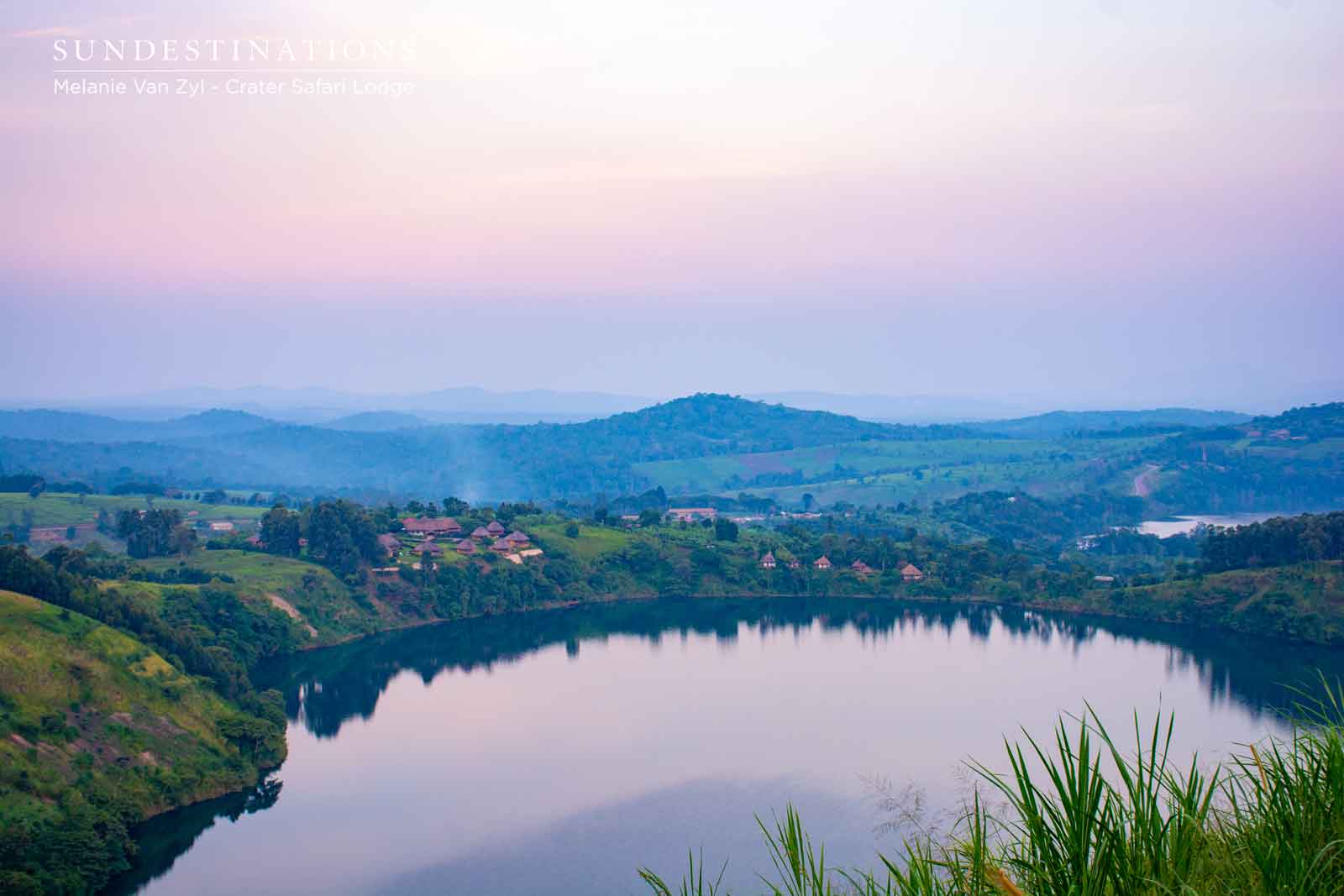 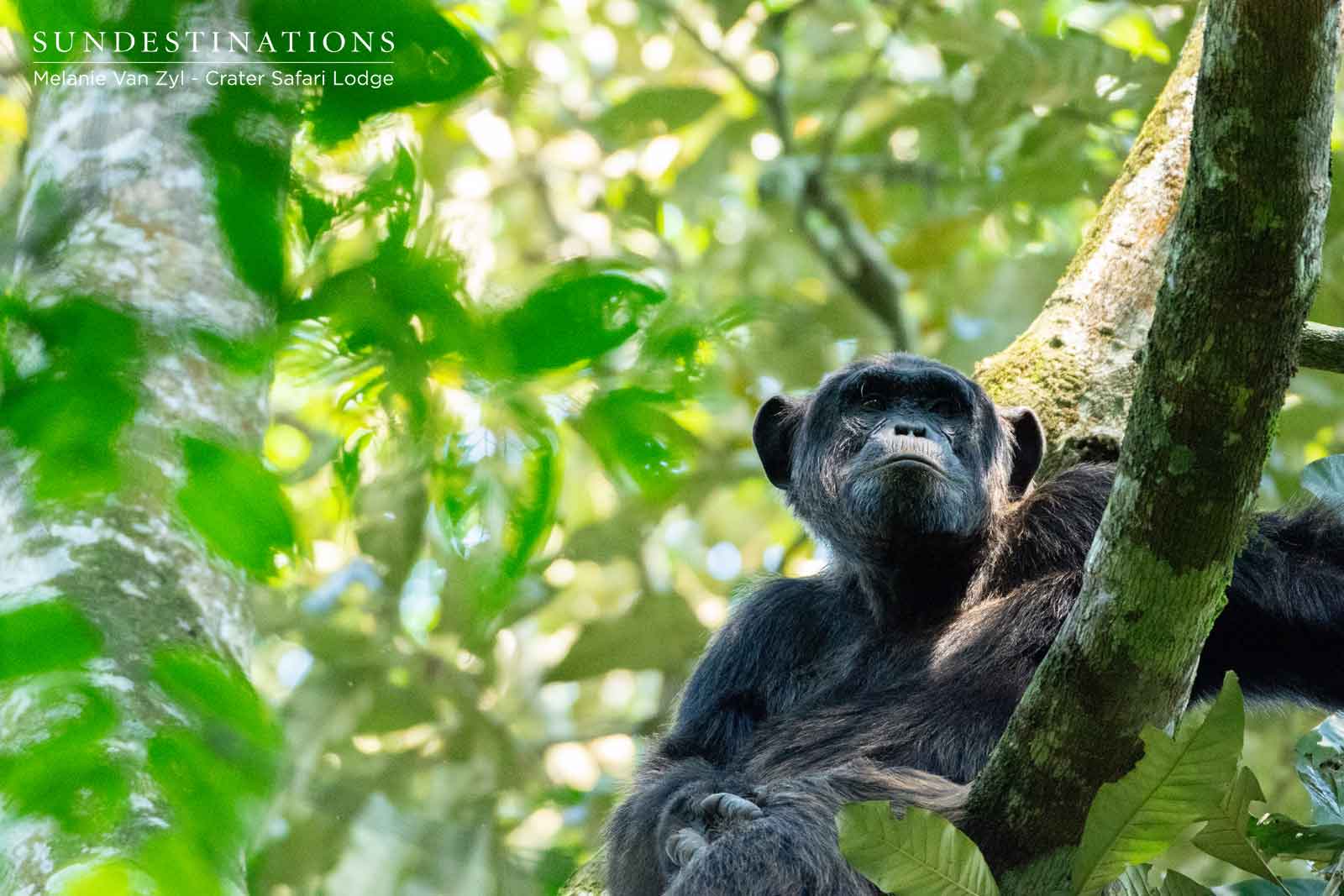