VIDEO: Front Row Seats at a Lion Kill in Klaserie 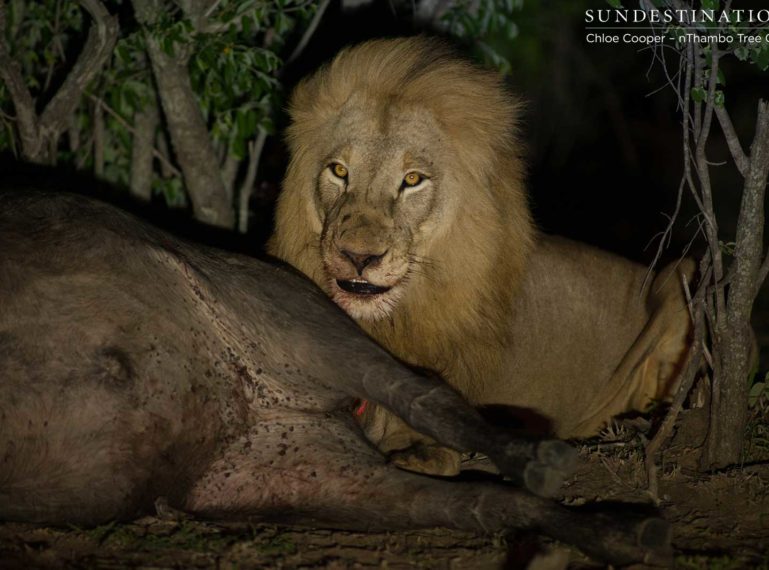 After catching up with the Breakaway lionesses and one Mapoza male yesterday morning looking decidedly lazy and content with sleeping all day, we were hoping the cooler evening hours would coax them into action. Well, action was what we got! Afternoon game drive took a dramatic turn at Africa on Foot and nThambo Tree Camp when the distinct call of a buffalo in distress rang through the air, and a cloud of dust rose ominously from the thicket near Twala Dam in the Klaserie. Kevin MacLaughlin was camera-ready at the scene of the sleeping lionesses, when all of a sudden the clumsy hooves of buffalo stepped right into enemy territory, setting the cats into stealthy action. In the light of dusk, the pair of lionesses were at an advantage, as the buffalos’ sight was beginning to fade. They moved carefully, taking full advantage of the vegetation that grew between them and their targets. They separated at first – one lioness keeping to the left of the herd, while the other stalked behind it undetected. Kevin quickly pressed record as the oblivious buffalo crossed right over the lions’ path and disappeared into the thicket. The lions followed and Kevin lost visual, but not 3 seconds later the sound of stampeding, bellowing buffalos gave away the news: the chase was on!

Kevin immediately put his Land Rover into gear, clung onto his camera, and took the road most likely to lead to the action, stopping every few seconds to listen again, dust settling around him. The continuous call of one unfortunate buffalo was the assurance he needed – the lions had landed their prey. A couple of metres on, the bush opened into a clearing, and there were the  two lionesses clinging to a female buffalo, still on her feet and thrashing angrily at the predators. It wasn’t long until she fell to the ground, and both lionesses positioned themselves for the kill. Kevin began to film once again, and just at that moment the radio crackled to life with Africa on Foot’s ranger Greg asking if what he could hear was true. Greg arrived, shortly followed by Ryan guiding his guests at nThambo Tree Camp. One lioness was tightly clamped around the throat of the buffalo, which was still kicking intermittently, and gurgling perilously with its last breaths. This iconic example of the predator-prey relationship in action is not for the faint hearted, as two of the Big 5 fight for their lives. It took about 30 minutes for the lionesses to kill the buffalo, and no credit could be given to the Mapoza male who came trotting onto the scene, emerging from the darkness, his eyes reflecting green in spotlight that illuminated the bush. The male couldn’t have been too far away, as he was seen with the lionesses earlier that day, and when his acute hearing picked up the sound of a buffalo in trouble, he headed straight in the direction of his soon-to-be meal. The pleased safari guests were excitably fidgeting with their camera settings, clicking away, and repositioning, capturing this incredible African night on camera. Once the deed was done, the lioness whose jaws had unfailingly clamped around the buffalo’s wind pipe released her grip and got up to join her sister a few metres away from their prize. The male lion was feeding first, as is typical at a lion feast, and the hard working lionesses lay obediently awaiting their turn. This morning, when we caught up with the lions, it was clear both females had eaten well. Their bellies were near bursting, and the buffalo carcass had at least halved in sized. The male lion was nowhere in sight, and a swarm of emerald green flies had formed a blanket on the carcass. All the drama of the night before became a part of history – just another buffalo carcass available to the scavengers and decomposers of the bush.