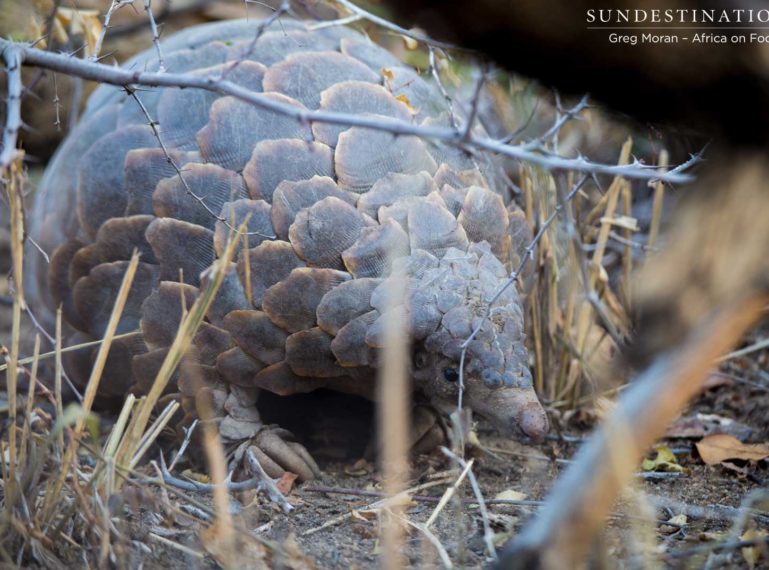 Given all the excitement surrounding Africa on Foot and nThambo Tree Camp in the Klaserie Reserve recently, we are discovering that just about every game drive presents something remarkable, whether it be a candy-coloured sunset, the perfect gin & tonic, African wild dog puppies, lions, or a rare and endangered (and hardly EVER seen) pangolin! This week, there has not been a dull moment – what with treehouse guests witnessing a lion kill on the ground below, wild dog pups gallivanting around, and leopards jumping out of trees – and then there was the pangolin to top it all off. The ‘scaly anteater’ as it is also know, was spotted crossing a road, and fortunately for our guests, we were in the right place at the right time! Seeing a pangolin, in all its oddly shaped glory, is a bucket list item achieved for many wildlife-lovers. Certainly, safari guides and rangers are introduced to this rare creature in text books, taught to identify their tracks in the ground, the evidence of their presence at termite mounts, but are seldom brought face-to-face with the animal itself. Rangers-in-training listen to stories about the pangolin from their instructors, who have spent many years in search of the pangolin, and these rangers themselves tell their guests about this rare mammal, covered in a coat of armour, with a tongue designed for ant-eating – everything they have come to learn about the mysterious creature, but have likely not seen with their own two eyes. Yesterday was a day the guides and at Africa on Foot and nThambo got lucky – an elusive pangolin was seen out in the open, going about its business, entirely unaware of the excitement it had caused among its audience. The reason for all this excitement, you might be wondering, is that the pangolin is incredibly endangered. It is the most illegally trafficked mammal on the earth with all 8 species ranging from vulnerable to critically endangered. In Asia and Africa, pangolins are traded for the superstitious beliefs surrounding their scales and for the delicacy of their meat, even though they are protected by international trade laws. Scarily, before 2013, ‘only’ 500kg of pangolin shipments were seized, and by the middle of 2015 over 8 tonnes of pangolin scales and meat were seized. In addition to this sobering information, pangolins are characteristically shy creatures, live alone, and are mostly active at night, and are well camouflaged, giving us very little chance of seeing them under the best of circumstances! In the Klaserie Private Nature Reserve, falling within the borders of the Kruger Park, there are measures in place to try and protect all species residing within this enormous area. Pangolin, along with rhino, African wild dog, cheetah, and even lions (believe it or not) are threatened species, and we are privileged to be surrounded by their wild populations. Needless to say, the sight of this pangolin is possibly the highlight of guiding careers so far!