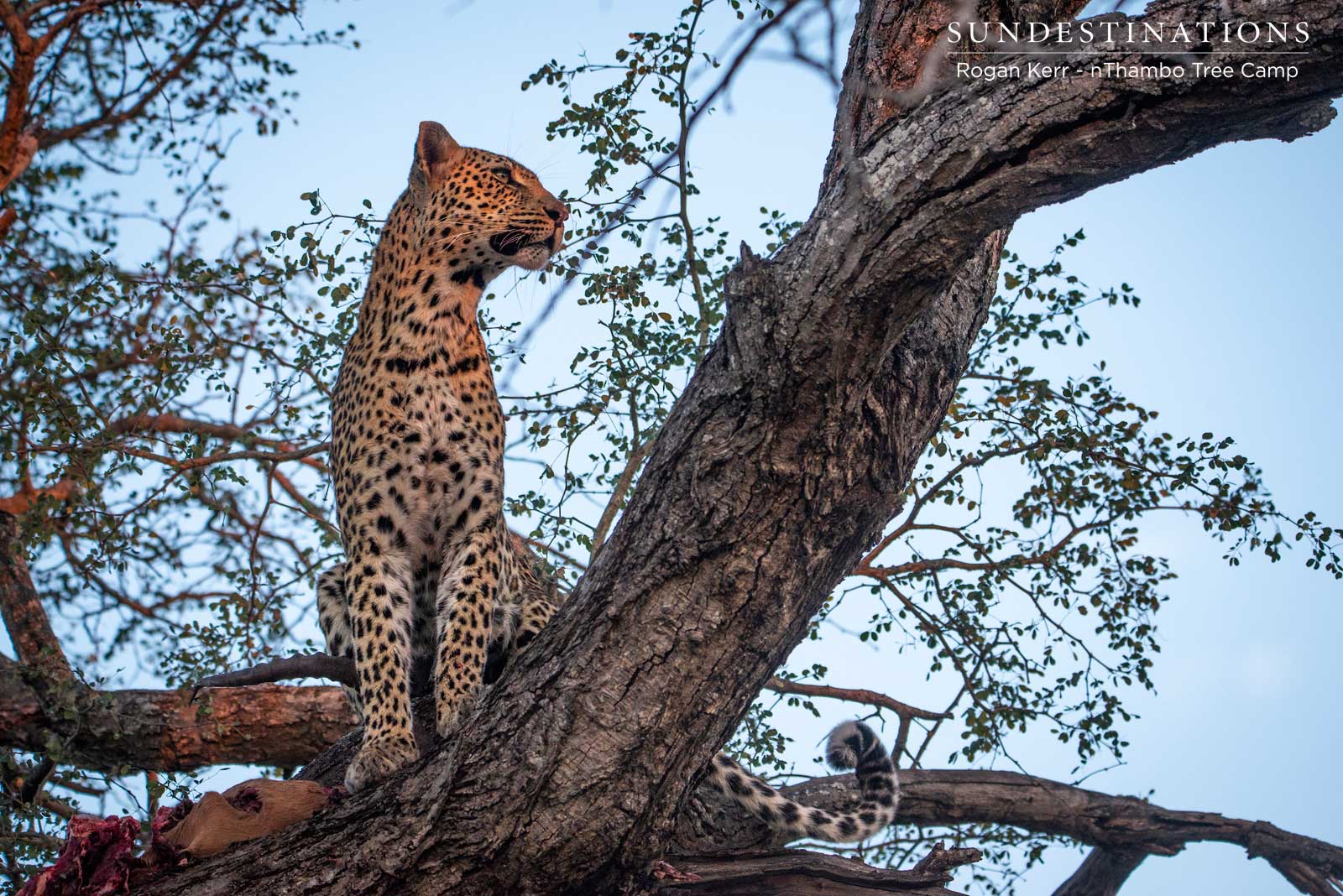 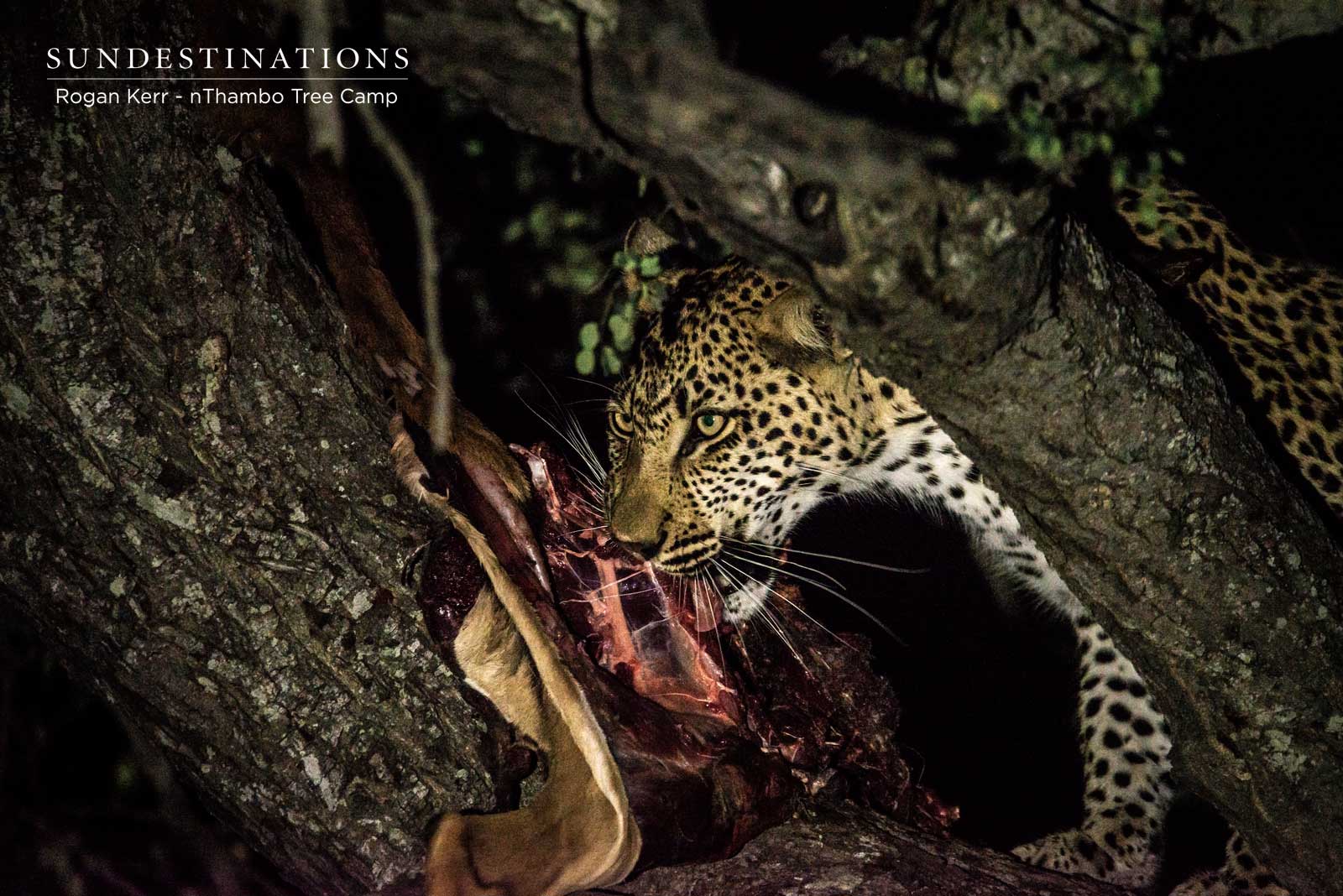 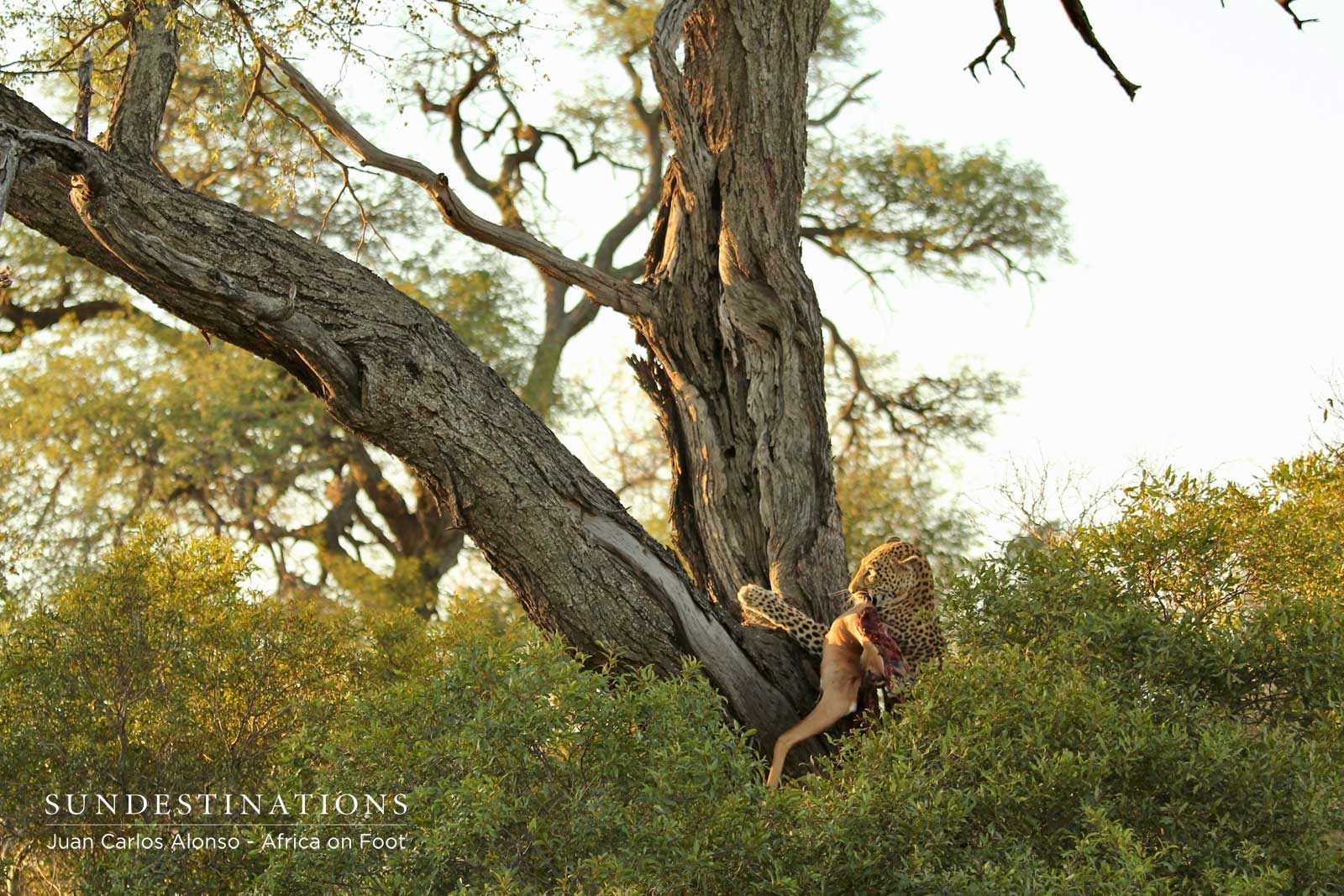 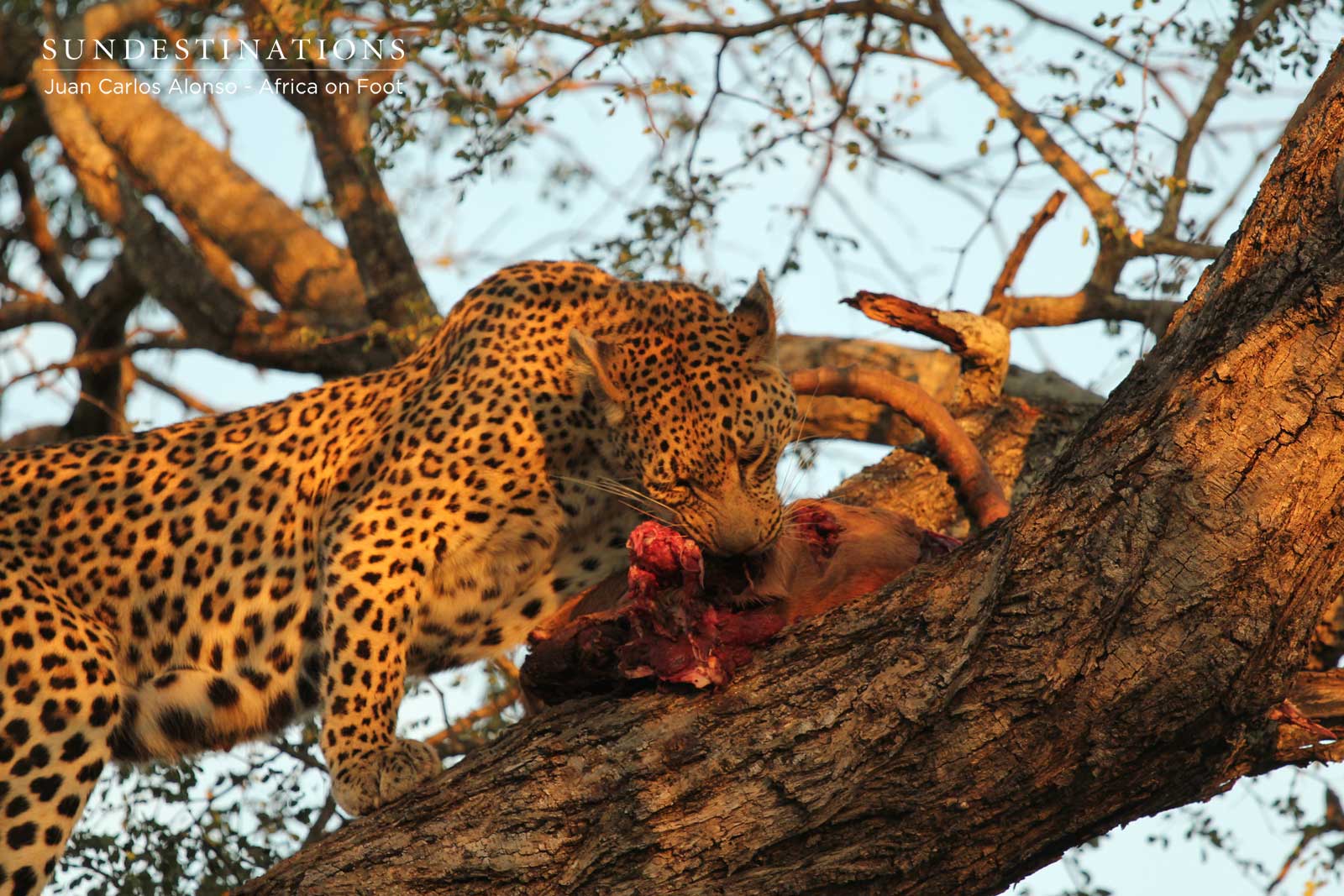 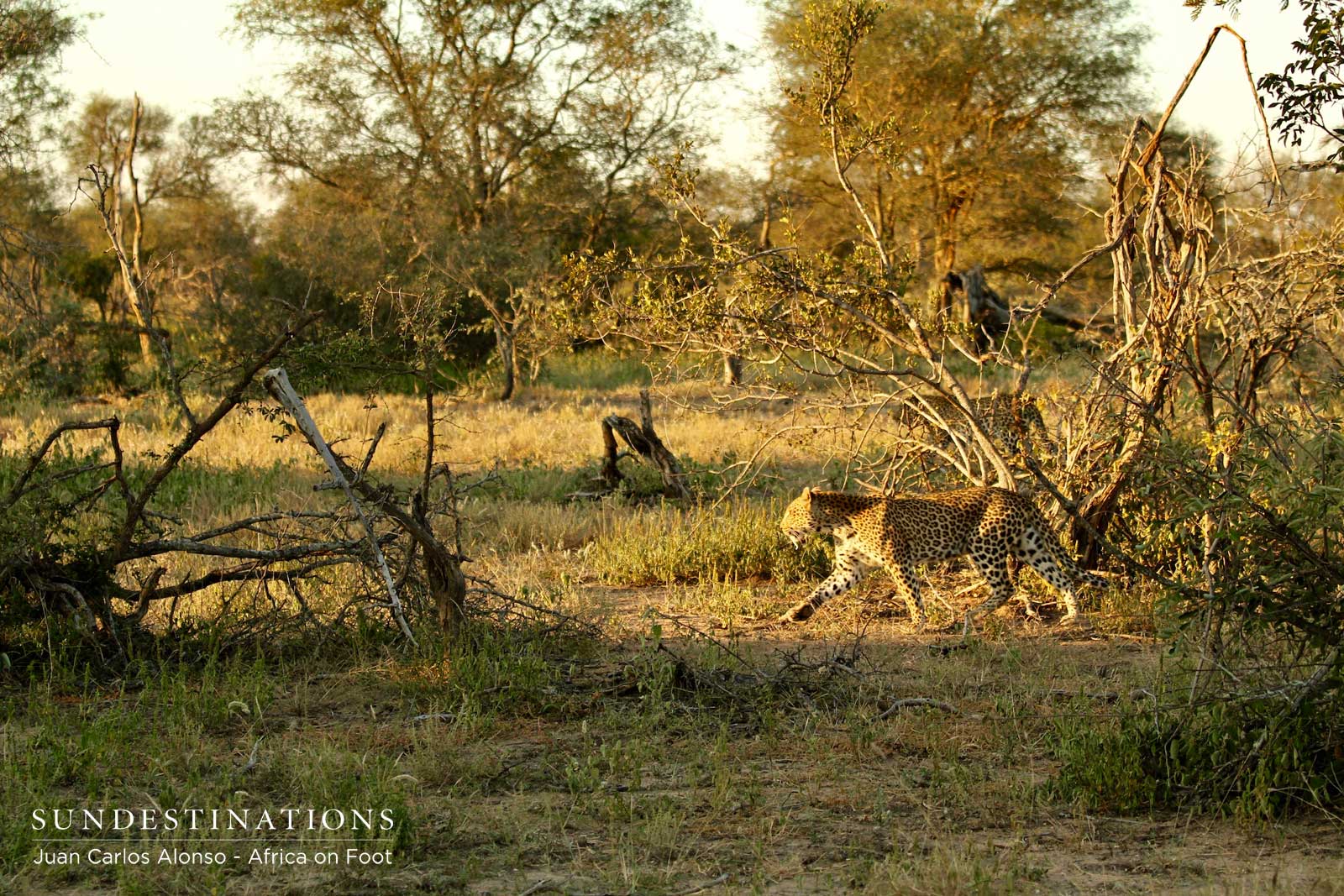 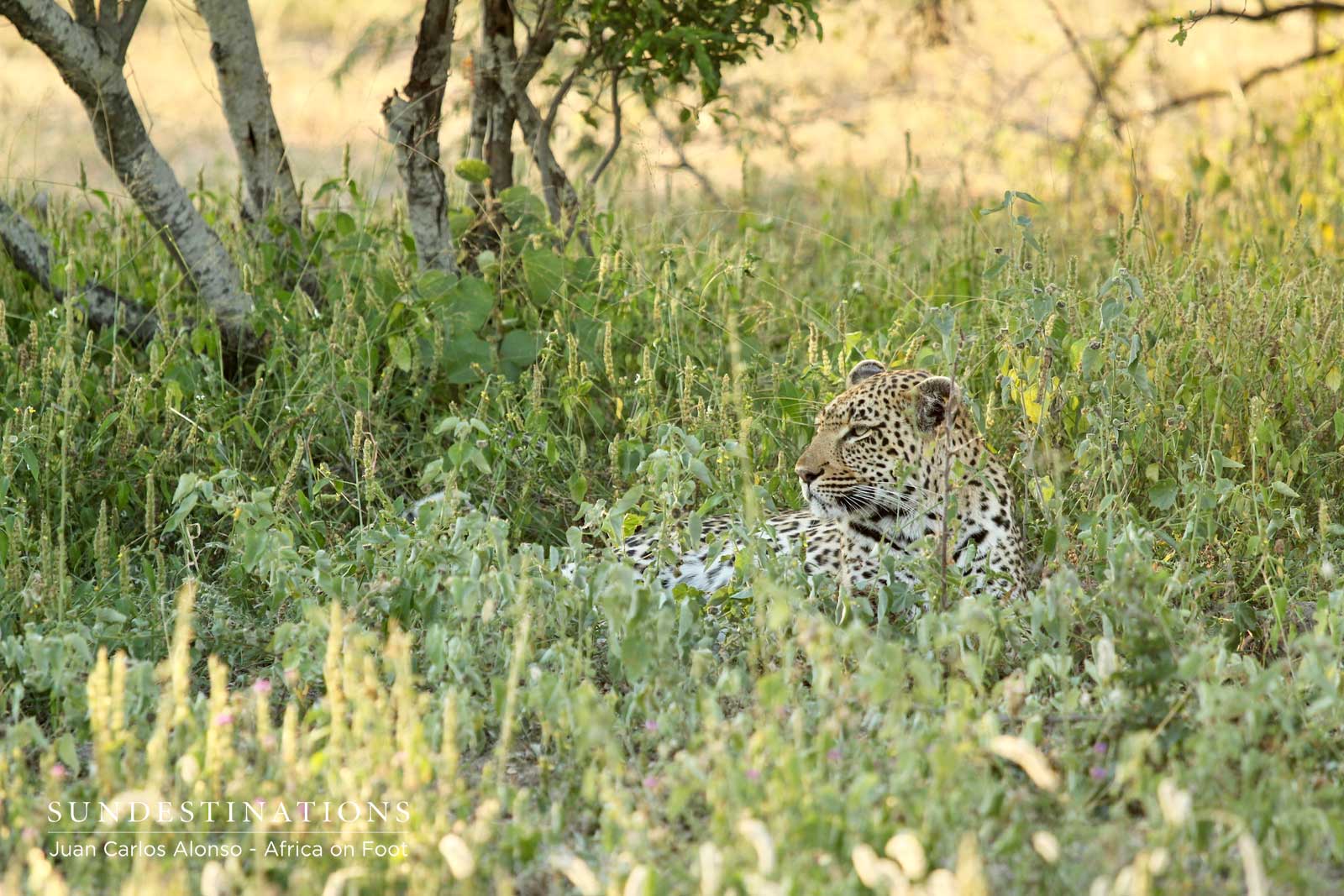 The leopard sightings have peaked in the Klaserie Private Nature Reserve over the past few weeks, and the nThambo Tree Camp and Africa on Foot traverse is fast becoming the central hub for Panthera pardus sightings. Long may this magnitude of sightings continue. It’s not the fleeting glimpses of the whir of mottled rosettes disappearing into the bush that we’re celebrating, but rather the type of leopard sightings that are emerging on our terrain. On Mother’s Day, we enjoyed a sighting of Rhulani with her kill on ground level, Ross Dam (Rhulani’s mother) quietly taking the kill from Rhulani, and “granddaughter” Nyaleti helping herself to the kill.

An interesting sequence of events, one that gave the impression of being some sort of disjointed family meal. That’s three generations of leopard feasting on the same kill. Videographer Rogan Kerr was there to film the event (we will be releasing these videos shortly), and nThambo guide JC furnished us with his images and a recount of the event.

JC says, “This was a special sighting. The nThambo team found a female leopard named Rhulani relaxing in the grass after taking down an impala ram. Other impalas began alarm calling, giving away her position and causing Rhulani to take her kill into a tree to protect it from other predators. Once done, we noted her looking intently in the direction of the fading sun, only to see another female leopard appear out of the bush. As it turns out, it was the Ross Dam female, Rhulani’s mother, no less. They greeted, Rhulani moved off, and then it was Ross Dam’s turn at the kill, after first hoisting it up into a better position in the tree. After sunset, we returned to find a third female leopard, Rhulani’s daughter, Nyaleti, feeding on the kill. Three generations in one location. How’s that for a Mother’s Day story?”

What do we know about textbook leopard behaviour that could explain why we are seeing related females angling for the same kill? We know that a female seeks territory with a high density of prey and ample den sites. A female’s home range is small compared to their male counterparts. Males seek out territory laden with females and food. Leopards are aloof and solitary cats, which is why we often spot solitary cats. They aren’t pride orientated. We tend to see more than one leopard together under the following circumstances : when it’s time to procreate, when the female is raising her vulnerable cubs, and when the newly independent cubs rejoin their mother’s for a hunt.

When cubs reach about 12 – 18 months they cut the apron strings and seek out their own territories. For a while they will operate on the outskirts of their mother’s turf, rejoining their mom occasionally for hunts. These sub-adults are tolerated by other leopards that understand the need for the youngsters to cross over and push boundaries – within reason.

In this instance we have Ross Dam, the foundation of the bloodline. Rhulani is her daughter and operates on the periphery, with Ross Dam tolerating her presence. Rhulani makes a kill and Ross Dam joins her, but Rhulani moved off from the kill quite quickly and there wasn’t much interaction between leopards. Rhulani quickly made herself scarce when her mother moved in on the kill. After twilight, Nyaleti moved in on the kill and happily feasted on the abandoned carcass straddling the fork of a tree.

We’ve enjoyed sightings of territorial males, broody females and unidentified youngsters pushing boundaries. Over the past few months, leopard sightings became prolific and pieces of the puzzle slowly began to fit together.  We are constantly being treated to sightings of Ross Dam’s bloodline, with the most recent highlight being the new addition of fluffy leopard cubs. Yes that’s right – Ross Dam recently gave birth to two leopard cubs and guide Elmar Van Niekerk managed to be in a prime position to photograph the cubs (we will also share images of Ross Dam’s leopard cubs at a later stage)! 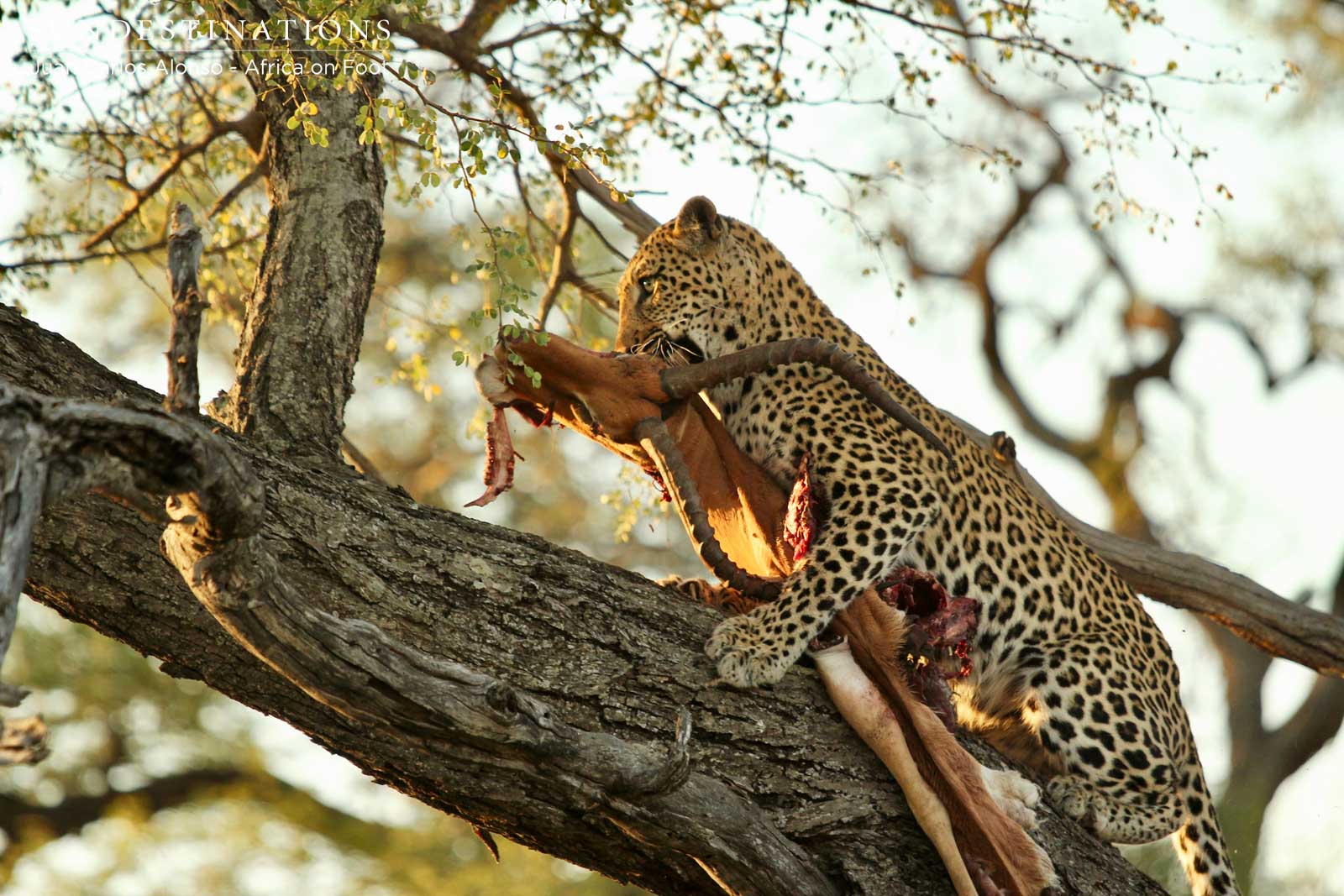 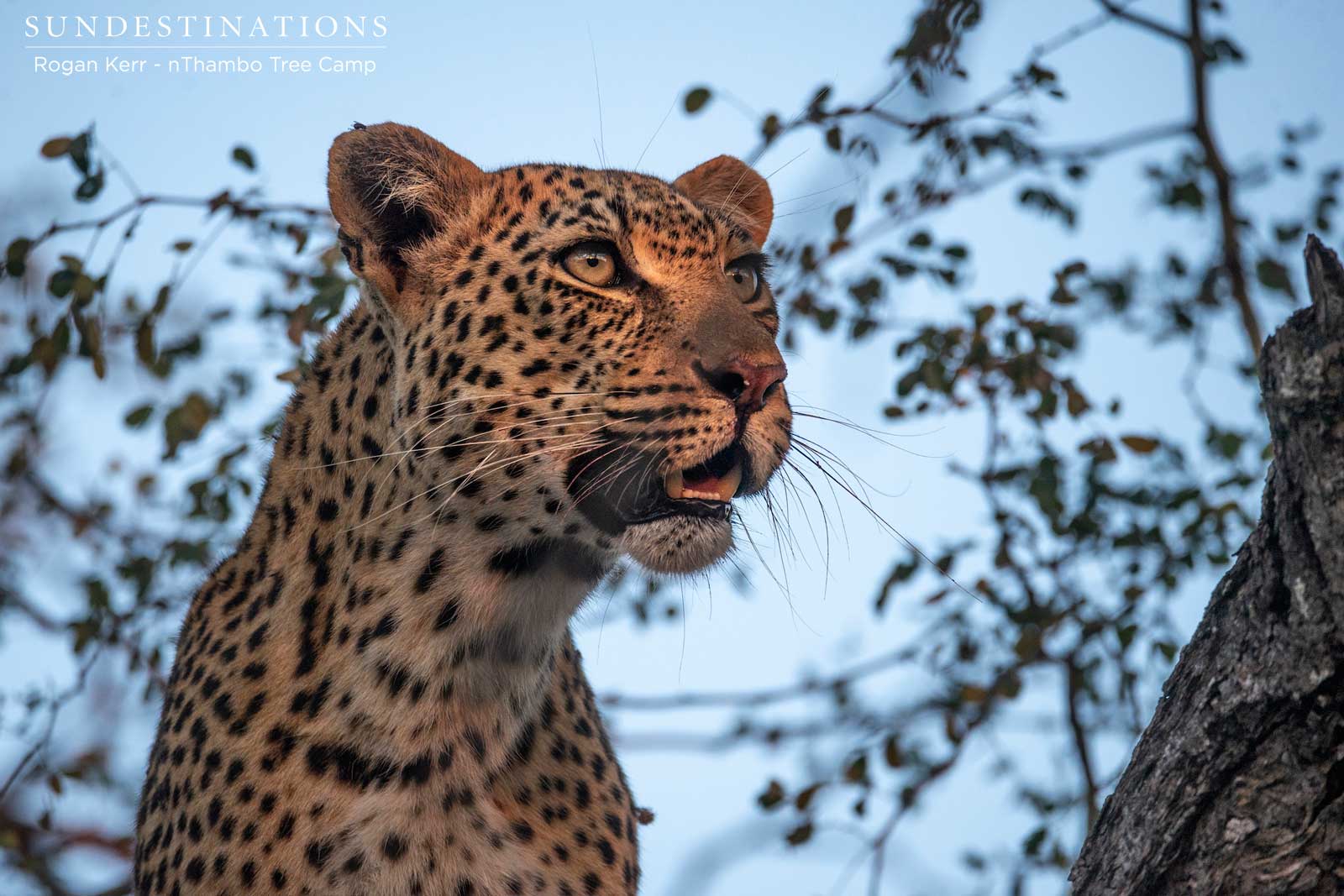 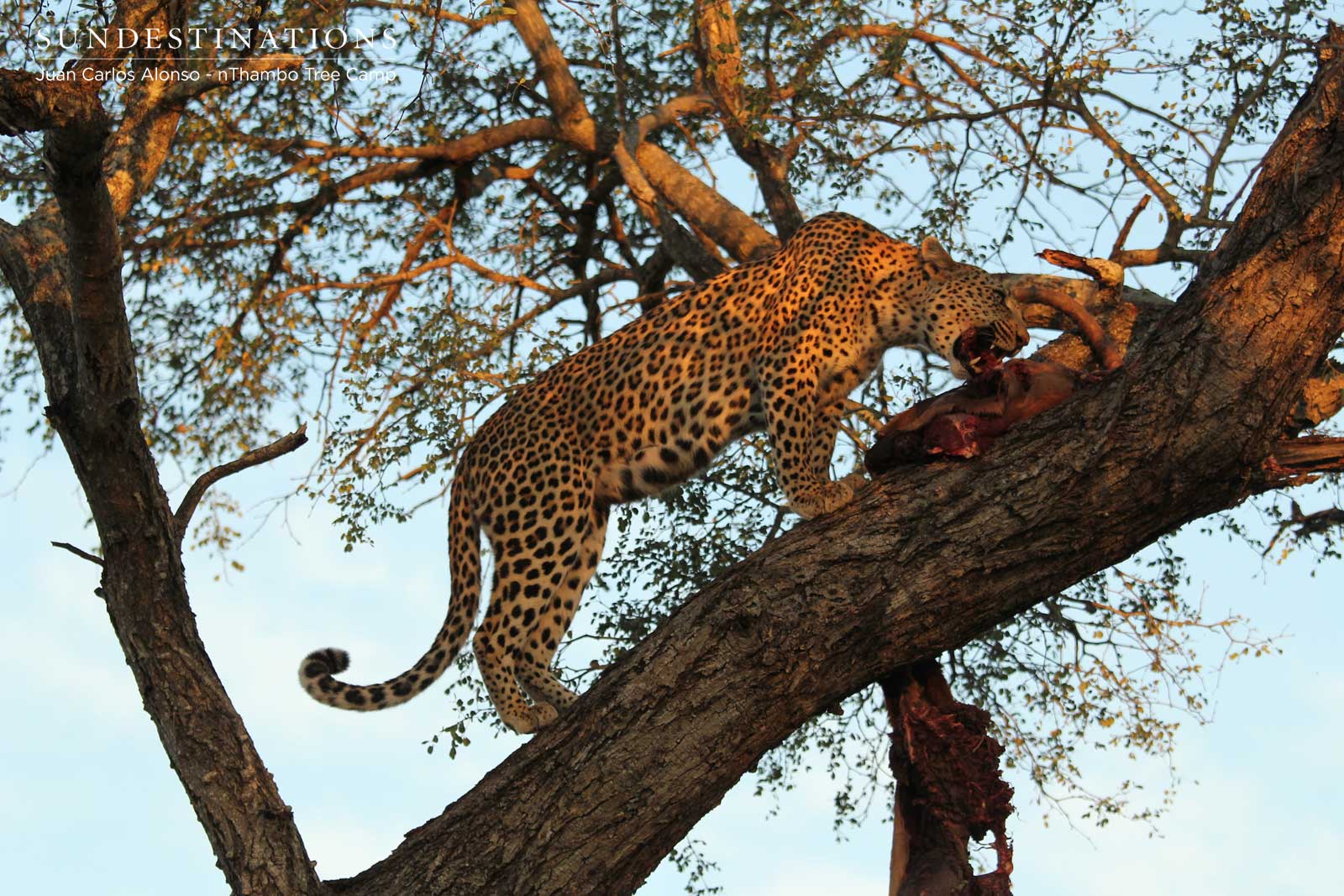 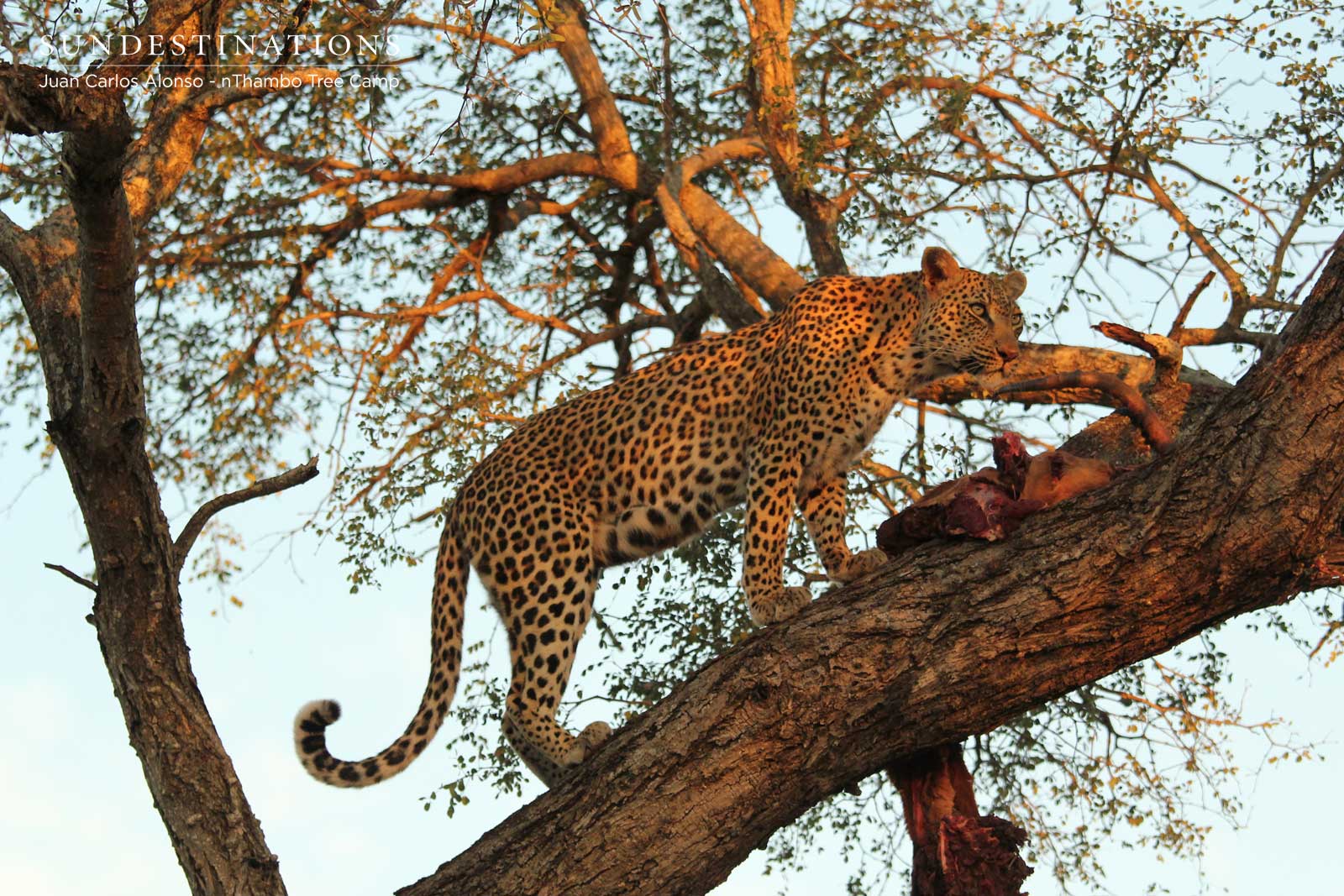 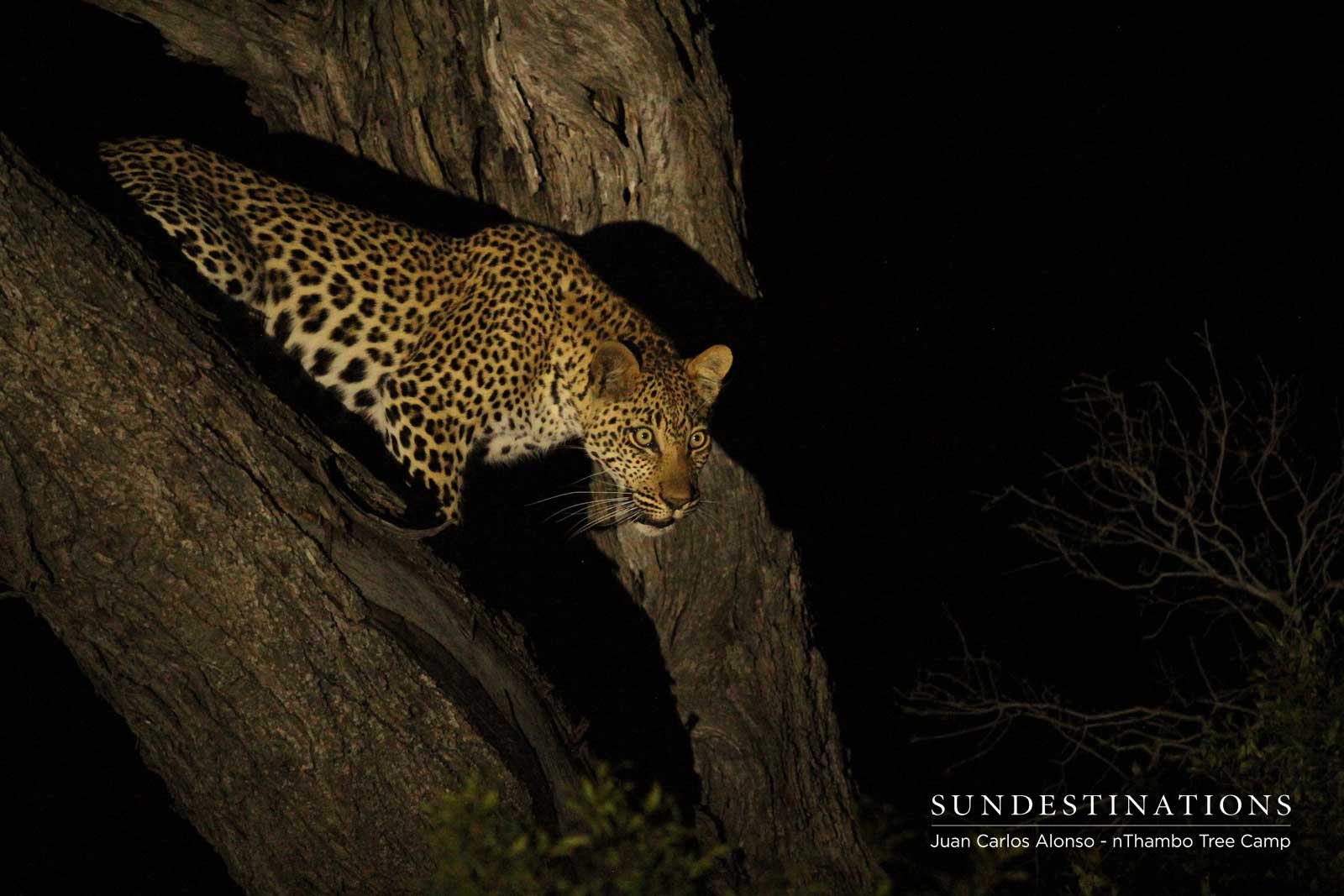