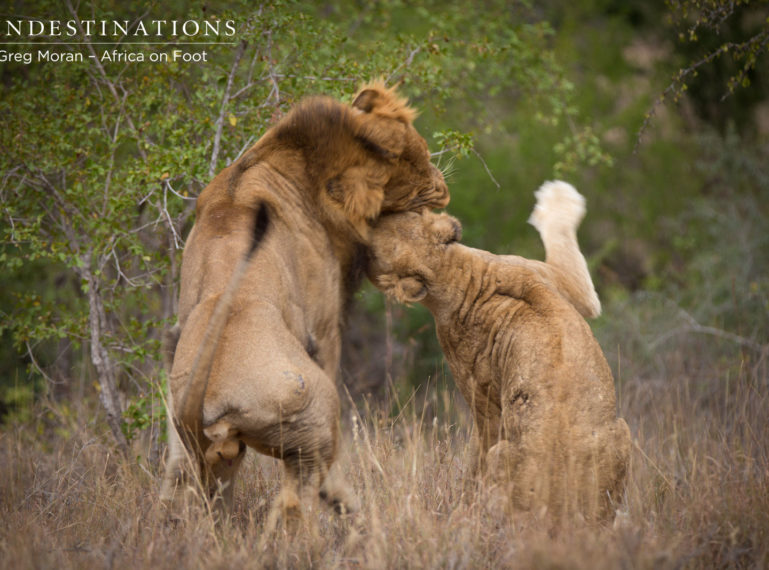 Welcome to part two in the Mabande male lion saga  – this time, things have heated up and excitement is mounting. The Mabande male, who we’ve recently introduced to our guests, is certainly settling into the Klaserie way of life. His presence is having a trickle down effect on the resident lions on the Africa on Foot and nThambo Tree Camp territory. This is big news for lion pride dynamics. Just like the changing seasons, the lion activity seems to be coinciding with the shift. New seasons, new lions.

Over the past few weeks we’ve been closely monitoring Mabande’s antics. It appears the Trilogy males were also watching Mabande’s every move and, feeling threatened, the old legends returned to their grounds for a fly-by-night visit. We suspect this was just to show all and sundry who dominates the area. However, this didn’t deter the scraggly maned Mabande male, who continued to test the waters of a potentially new turf.  If you recall, last week we reported that he  killed a buffalo, followed the Ross Pride Breakaway lionesses and made his presence known around nThambo Tree Camp and Africa On Foot. During the time when the Trilogy returned to their old domicile, Mabande seemed to lie low for a while. When he deemed it safe, he re-appeared with a vengeance! Is this boy actually be here to stay? There was speculation that he might just be passing through, but since Thursday last week, there’s been an interesting twist in the saga. You could say he has upped his game and asserting his dominance.

The virile male decided that mating with the two Ross Pride Breakaway lionesses was the next step. Since Thursday last week, Mabande has been spotted with his pants down, taking turns to mate with BOTH lionesses! In conjunction with that, he has been calling during the dead of night. Calling is normally a form of communication to advertise their territory. Contact calling happens at night because the air is still and sound travels further. During this time, not one of the Trilogy have responded to his territorial roars!

Greg Moran, a ranger at Africa on Foot, says “Mabande has been calling almost every night since Thursday and the Trilogy boys haven’t responded. If Mabande continues to hang around the Ross girls, then the Hercules Pride will leave them alone. There is a chance that if Mabande comes face to face with the Hercules Pride that he might kill off the youngsters.” Why would Mabande want to kill the youngsters from another pride? Unfortunately, this can happen when a male is attempting to take over a territory. He would, in theory, want his own bloodline to be continued and will kill off the young within a pride. This also eliminates the possible competition from youngsters who may grow-up wanting to take his spot as leader.

Being brave and full of testosterone, Mabande tried to take down another buffalo last night during our virtual LiveBushFeed session. He stalked his target, but it was a useless attempt. He has probably expended plenty of energy during the mating process! The Ross Pride Breakaway lionesses certainly have had their fair share of warfare and drama. The Hercules pride killed their cubs, they’ve mated with the Trilogy and now it’s new beginnings for them with the Mabande male.

The Klaserie is alive with lion activity !

Catch all the history, the timeline and the full story of the first Mabande male sighting from ranger Mike Beard here:  Mabande Male Lion Enters the Klaserie Private Nature Reserve

Stay tuned for the next part of the saga. Things are heating up fast.