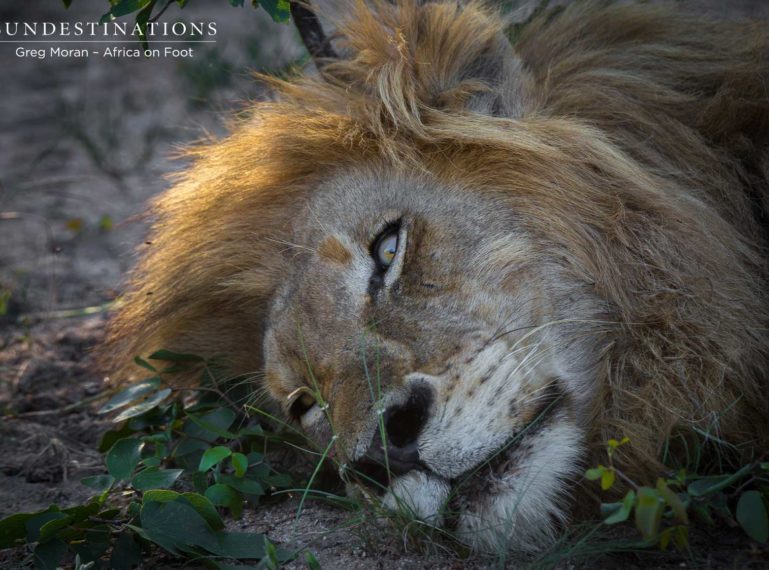 Duma was a force to be reckoned with in the Balule Nature Reserve and patrolled his turf with determination. With his golden locks and respectable swag, he was considered by many to be the king of the central and southern parts of Balule. Easily identifiable by his trademark mohawk, he became a much loved sighting while out on game drives with Ezulwini Game Lodges.

Duma’s brother forms part of the Mohlabetsi coalition of 4 lions, which are still a strong force within the Balule. This coalition appears to rule over the Impalabos Pride, River Pride and the Mohlabetsi Pride. Duma’s Pride used to avoid the coalition of four and at one stage; and we even had reports of a huge scuffle between Duma and his brother.

Sightings of Duma became fewer and there was speculation and rumours abound that he’d fled his turf and sought refuge within the eastern block of the Klaserie Private Nature Reserve. There were recordings of Duma sightings, but within our section of the Klaserie, we couldn’t confirm his whereabouts. Had Duma become an apparition and faded into the darkness with other ancient lion legends?

No, not quite. We’ve just spotted Duma cruising the Klaserie traverse together with lone ranger lion Mabande. It appears this Balule male has joined forces with Mabande on the Klaserie traverse! nThambo Tree Camp and Africa on Foot had confirmed sightings on both Tuesday and Wednesday this week. Mabande is a lone lion who initially belonged to a coalition of 4 lions, which split up into a coalition of 2. After being flushed out of their turf by the Ross Pride males, the two fled. We don’t know where the second male is, but that’s how Mabande became a nomadic male.

Mabande’s mane is thick on the sides and sparsely populated on top, making his appearance look a big scraggly. He tried to make his presence a dominant one within the Trilogy turf and even seen grappling with the Trilogy males. But his efforts to dominate weren’t very successful.

Over time, he managed to mate with the Ross Pride lionesses and made quite the scene in and around Africa on Foot and nThambo Tree Camp. Mabande seemed like a fighter determined to stake his claim on something! As it stands, he isn’t looking like the strong male he once was, so perhaps this joining of forces with a dominant and street wise character with ensure they form a powerful coalition.

We really don’t know what will unfold in terms of this interesting dynamic; but we will be watching closely. The Hercules Pride have been seen on a regular basis and can be quite a turbulent bunch. Let’s hope these two don’t have a head on collision with the Hercules warriors!

We spoke to ranger Greg who says, “Mabande and Duma were cruising around together, getting to know one another. They’ve joined forces but they don’t appear to want to take over anyone’s territory. At least not for now! Chasing each around for a month or so in the east block and avoiding contact, but now it seems they’ve joined up and come to some kind of agreement.”