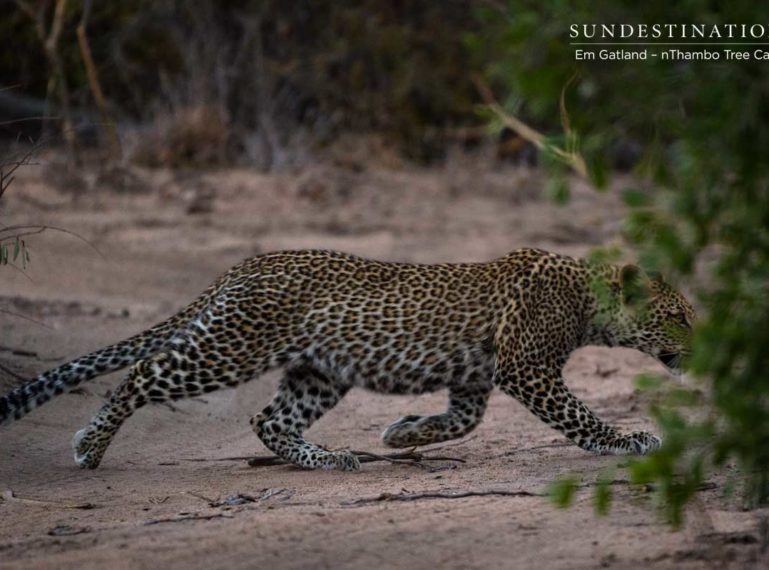 A rustling was heard in the shrubbery and a flash of mottled tawny seemed to dart between the bushes. The game viewer stopped and its occupants listened acutely. Lo and behold, an elegant leopardess was spotted together with her cubs. The bush was thick and green, but the unmistakeable dark rosettes on her coat “shone bright light a diamond” making it possible to gain visibility. Recently, the Klaserie Private Nature Reserve has been a hotspot for leopard sightings! We managed to take a few photos AND get a sneaky bit of camera trap footage. Bjorn’s camera trap footage shows two leopards in the frame – although a bit shaky and dark; you just don’t get anymore raw and real than this! The sighting was fleeting and some rangers claim there are three cubs, others speculate two but we can confirm one for certain! This slender, lithe leopard we’re currently listing as unknown. More information is being gathered but we do know that she is on the periphery of Ross Dam female’s turf – is it her? Unfortunately, the sightings haven’t been long enough for us to completely ID her, but the Africa on Foot and nThambo Tree Camp team are on the lookout. Luckily, Em Gatland was on the scene to photograph a few daylight sightings of this exceptional leopardess. What do we know about female leopards and their behaviour? The more we understand them, the more we can accurately predict their next move. Although this is never a given, we can base everything on past behaviour and observation.

Here’s what we do know about female leopards:

If you want to see anymore of Bjorn’s camera trap footage please check out the nThambo’s Camera Trap Secrets channel.