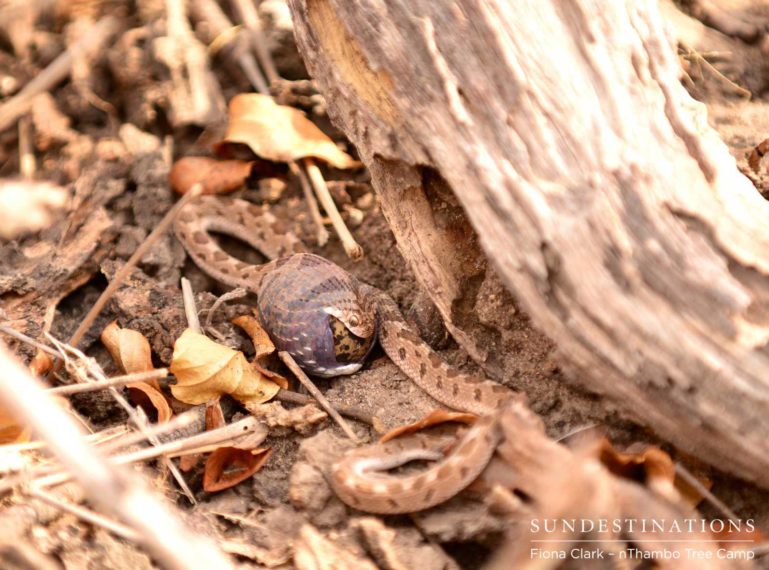 This is a fantastic example of how unpredictable a game drive can be, and how paying attention to the signs and sounds of the bush can lead to an epic, once-in-a-lifetime sighting! Regular guests, Mike and Fiona Clark, are back at their familiar holiday spot in the Klaserie – nThambo Tree Camp. After plenty of spent on safari, the Clarks have seen their fair share of special sightings, but in this case, even nThambo’s legendary tracker, Issac, who has spent his life in the Lowveld, was breathless with excitement! The source of the commotion was the sight of a rhombic egg-eater (snake) swallowing a speckled egg belonging to a crowned lapwing. Take a look at Fiona’s account of the experience…

We were parked viewing a nice herd of buffallo grazing in an open clearing. As we all viewed this, taking photos, there was a comotion on the other side of the Landcruiser. A pair of Crowned Lapwings were alarm calling, so Isaac got of the game viewer to investigate. To his surprise he came across a snake eating one of their eggs. The snake was a common rhombic egg eating snake. Isaac was so excited , as in all his years in the bushveld he had never seen this before – Ryan our ranger had also only seen this in books.
Therefore we all got off the game vehicle (carefully as the buffallo were stil grazing on the opposite side) to have a closer look. Sure enough, there on the ground was a small snake, with its mouth extending over an egg – it’s skin stretched so far that you could see the speckled egg through it. It was amazing to see how this small snake could actually swallow this egg, which then gets crushed by the muscles in the snakes body and ingested!

This just goes to show that it’s not all about the Big 5 on safari – often the smaller , less known sightings, are often far more exciting and informative. Back in camp, we got out the text books to look into this in more detail.