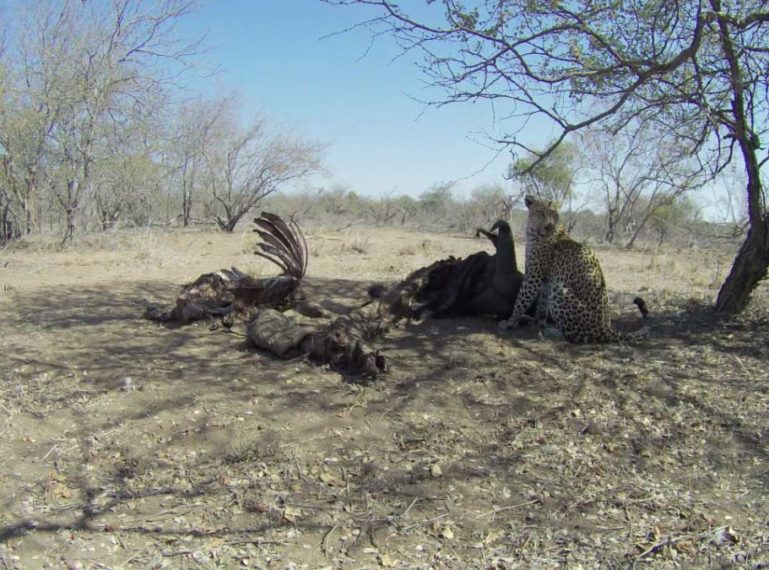 When buffaloes lose their lives to lions, it’s the beginning of a process of decomposition, and it is surprising just how many creatures benefit from the death of the buffalo after the lions have done their part and eaten the meat from the bones. The entire buffalo gets put to use and all that remains might be the bleached bones, or the worm-eaten keratin remains of those impressive horns that once were. Recently, when the Mapoza male lions and Ross Breakaway lioness killed a buffalo just below the Africa on Foot treehouse, we were surprised to catch a leopard creeping around the carcass once the lions had moved off! This is not unexpected, but given leopards’ usually elusive behaviour, it seemed unusual to catch Ross Dam female visiting the carcass in the middle of the day, especially given its location close to human activity. Kevin MacLaughlin was on the scene filming white-backed vultures screeching and squawking around the carcass in a feeding frenzy (ever wondered where the Jurassic Park sound effects come from? Now you know), and out on the periphery, he caught a glimpse of a leopard easing its way closer to the scene. She soon slunk off without making an approach, but she was enough to scare the vultures away momentarily. It is likely that the leopard was nervous, given that lions had been in the area so recently, and could possibly still be close by. She didn’t approach the carcass, but her interest in it was enough to spark Ranger Greg’s excitement, and he shot out to the carcass to set up his hidden camera in the hopes of catching her coming closer…

Well, we were in luck! As soon as all was quiet and she was seemingly alone, she approached the carcass again while the vultures hung around in the surrounding trees. Greg’s camera trap captured everything on film, and now we get to watch as the leopard – identified as Ross Dam Female – approached the carcass very nervously and began to feed on whatever rotting meaty remains she could find. She circles the carcass once or twice, sniffing and licking and testing different parts of it until she settles down for a quick nibble before disappearing off into the dry bushveld yet again, and opening up the opportunity for the vultures to continue feeding.

The circle of life is nothing less than amazing, and there is no such thing as waste. So when that unfortunate buffalo lost the battle with the Mapoza males, it fed 4 lions, a leopard (which has 2 cubs), hundreds of vultures, jackals, hyenas, tawny eagles, bateleurs, insects, and beetles, and a whole host of microscopic consumers that aid in the decomposition process. We are so fortunate to have had the carcass ‘in our back yard’ to observe the process so closely.