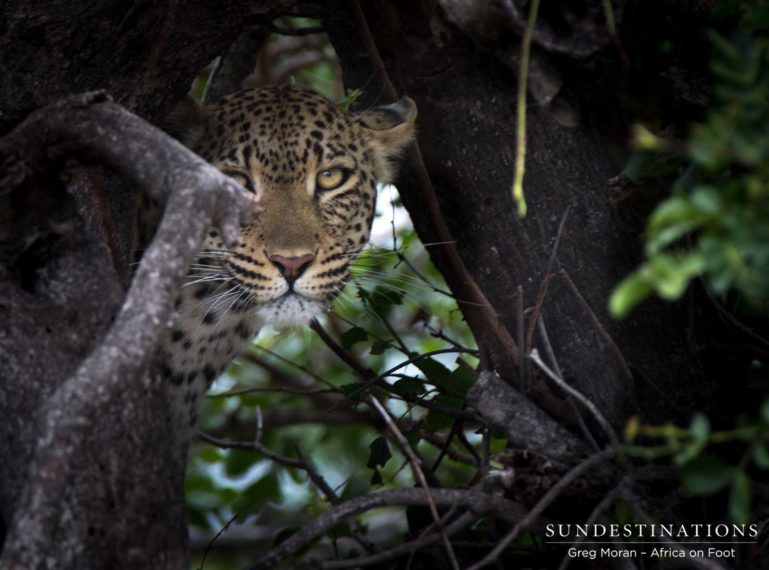 The Klaserie is full of excitement at the moment, from the electric storm that loomed in the distance and eventually brought some brilliant rain to Africa on Foot & nThambo, to the exceptional leopard sightings that have brought game drives to a new level of epic! Last weekend, Africa on Foot ranger Greg reported some very festive sightings of Ross Dam leopardess and her two cubs, and then last night and this morning, guests were fortunate enough to see the female leopard and her cub again – this time with a kill! Take a look at how this sensational sighting went down… Yesterday afternoon, we broadcasted another episode of #livebushfeed, and as we were receiving the live game drive reports, Greg called in a sighting of Bundu – Ross Dam’s male cub! The almost-2-year-old youngster was enjoying a very leisurely afternoon alongside a waterhole where he lay, unfazed by our presence, and offered up the opportunity for a fantastic photo! Not far away, Africa on Foot ranger Mike called in a separate leopard sighting, which turned out to be Ross Dam, Bundu’s mother. These cats still live and feed together, along with Ross Dam’s female cub, named Saffron, but the shy young lady was nowhere in sight this time. Mike reported that Ross Dam was clearly on the hunt, pursuing a herd of impala in stealthy silence. She was left to her nocturnal ways and guests returned to the lodge for some eagerly awaited dinner.

This morning, it was clear Ross Dam had successfully hunted an impala in the dead of night and had fed on a good portion of it already. nThambo Tree Camp and Africa on Foot vehicles were out in a bit of light drizzle, and all guests were richly rewarded by the sight of Ross Dam dragging her kill across the ground before powerfully leaping into a tree with it gripped tightly between her jaws. It is an astonishing sight to watch a female leopard, which is small in stature, haul a +-40kg antelope into a tree, clawing her way up the tall trunk and positioning her prey neatly in a cradle of branches for safe keeping. Guests watched in breathless silence as she stashed her impala kill and then elegantly descended once again. One of her cubs was present on the scene, but too hidden to tell if it was Bundu or Saffron. Nevertheless, our eyes couldn’t focus on anything other than this magnificent female leopard as she paused halfway down the tree and gazed around for a few seconds before landing softly on the floor. What a morning!