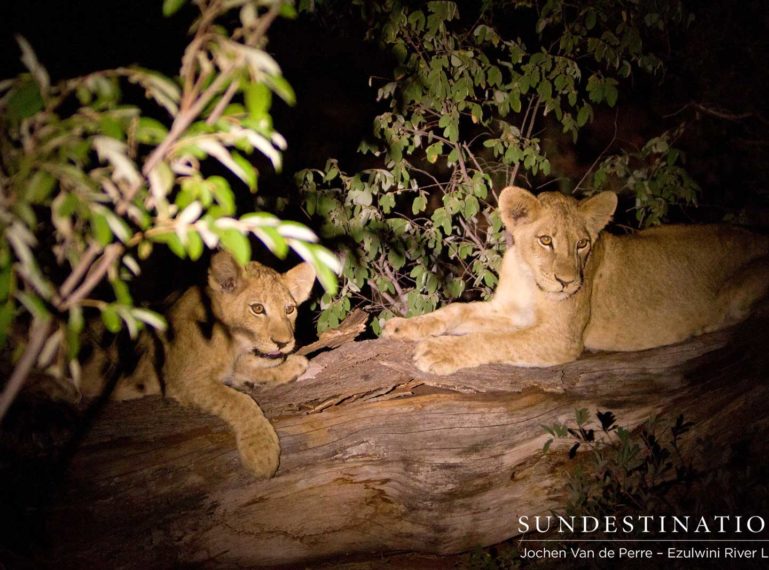 The Mohlabetsi Pride has been seen regularly in the last week on safari with Ezulwini River Lodge and Billy’s Lodge. This usually large pride of lions has been seen in fragmented parts, and we’ve seen two groups lately – one of 3 lionesses and cubs, and another of 4 lionesses and 1 young male. Even more fortunately, the 3 lionesses have presented their 4 young cubs to us for the first time. What a special sight! It was after dark when we caught sight of the lionesses and cubs, and they were on the move. They stopped and started, crossed the road, lay in the sand, clambered over fallen tree trunks, and generally gave us a great look at them. These lionesses and their cubs are known to be part of the Mohlabetsi Pride, and since they split off from the rest of the group we haven’t caught sight of them and their cubs. It has certainly been our lucky week! The 4 lionesses and 1 young male, also part of the Mohlabetsi Pride, were seen lazing at the edge of a waterhole earlier on in the same day that the females and cubs were seen. The lions drank from shallow puddles and dozed off on the sand, rolling around as cats do, enjoying the comfort of one another. All 5 of them looked decidedly plump, which is evidence of them having fed nicely not long before we caught sight of them. After feeding, lions often move towards water to drink and sleep away the heat of the day. We were obviously in the right place at the right time that day, because – to top it all off – the Van Wijk’s female leopard was spotted on the same game drive! Just another day in the Balule.