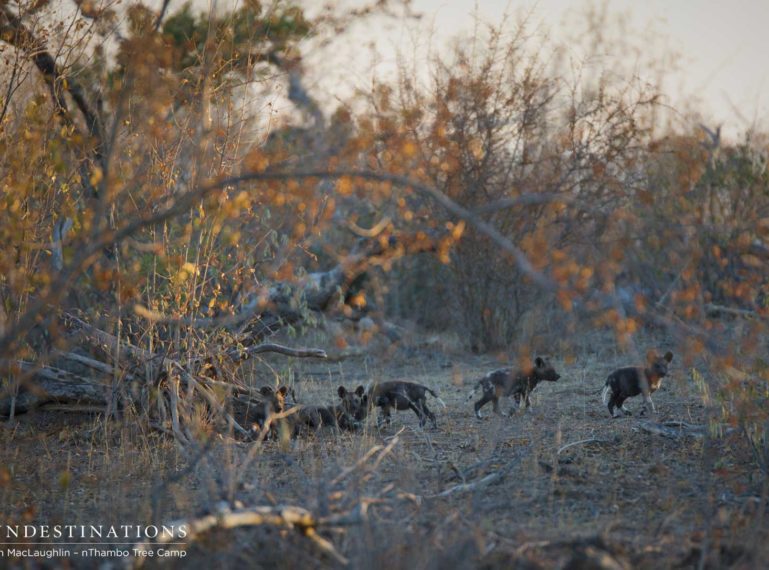 We’ve brought you the incredibly exciting news of the new wild dog den around town, and we’ve had brief glimpses of the young pups as they rush out of their hiding places to receive food from their adult pack members, but yesterday was the best of all! The 8 pups were seen gallivanting playfully and pouncing on one another out in the open for all to see. The three adult dogs relaxed in the last of the day’s sunlight and couldn’t be bothered with ‘the kids’, so it’s a good thing they can entertain themselves. The little painted wolves bounded around energetically and sniffed tentatively at suspicious looking balls of elephant dung, while Africa on Foot and nThambo Tree Camp guests absorbed the awe-inspiring scene. The endearing thing about African wild dogs, or painted wolves, as they are also known, is that they all look after one another. Every member of the pack will support the breeding effort, which is only performed by the alpha male and female. The dogs hunt together to take down prey, while the den might be guarded by one of the dogs that remains behind as the ‘den guard’. The alpha pair will mate and produce pups, and those pups will eventually leave their natal group in same-sex groups. All the sisters will move off in one group, and all the brothers will go in another direction. Each group will look for a same-sex group of the opposite gender, and then an alpha pair will form and the breeding cycle starts all over again. The theory goes that this co-operative breeding – whereby all pack members work to take care of the pups – is in the name of ‘kin selection’, meaning that the pack is working for the survival of their own genes. One group of females will all be related, therefore, the pups born to the alpha will also be their kin. There is a beta pair in a pack, too, which is there to take over breeding responsibilities should something happen to either the male or the female alpha pair. If the alpha female dies, the beta female will her place and mate with the alpha male, and same if the alpha male dies. Sometimes, the beta pair might breed and produce their own pups, in which case the alpha female might kill the beta pups, or take them as her own.

This pack of wild dogs is particularly small at only 3 adult dogs, so with 8 pups running around, there is a lot of feeding work to be done! Usually there are between 12 and 30 dogs in a pack, and they rely on their numbers to take down big prey species and sustain a litter of pups, but in this small pack the adults have got their work cut out for them! It’s an absolute pleasure to witness these precious, endangered predators thriving in the Klaserie… especially now that the pups are brave enough to come out and play!