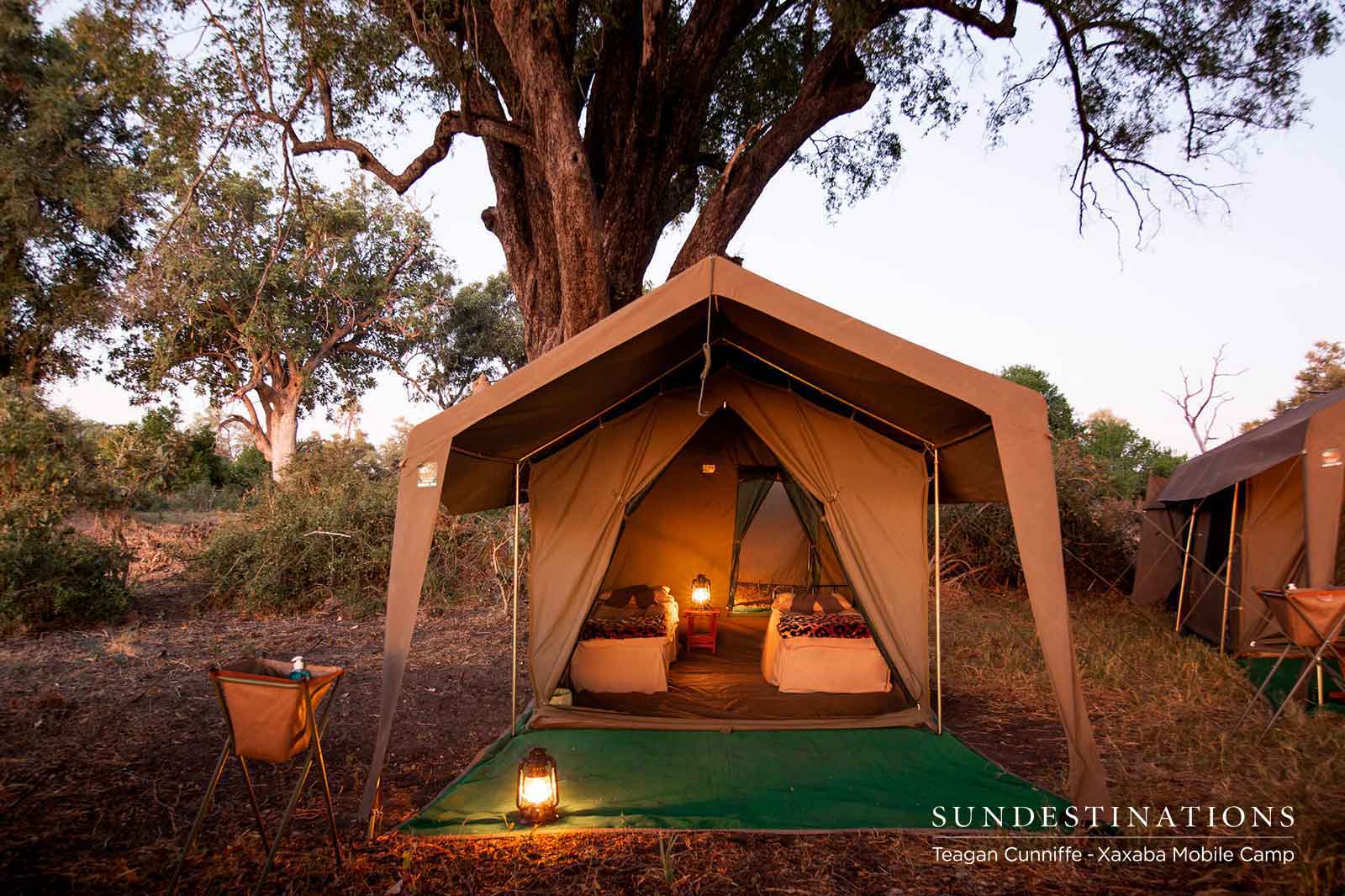 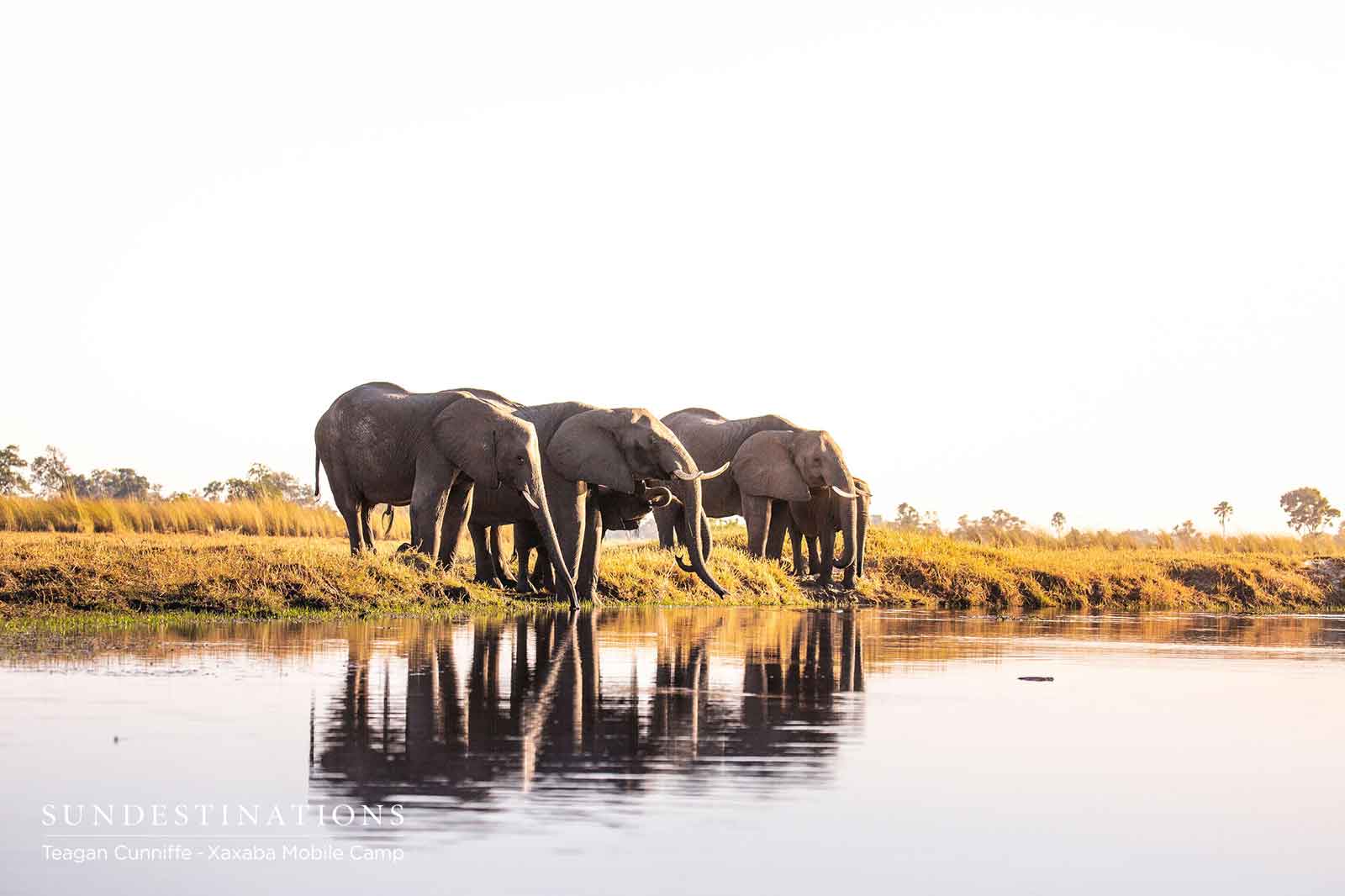 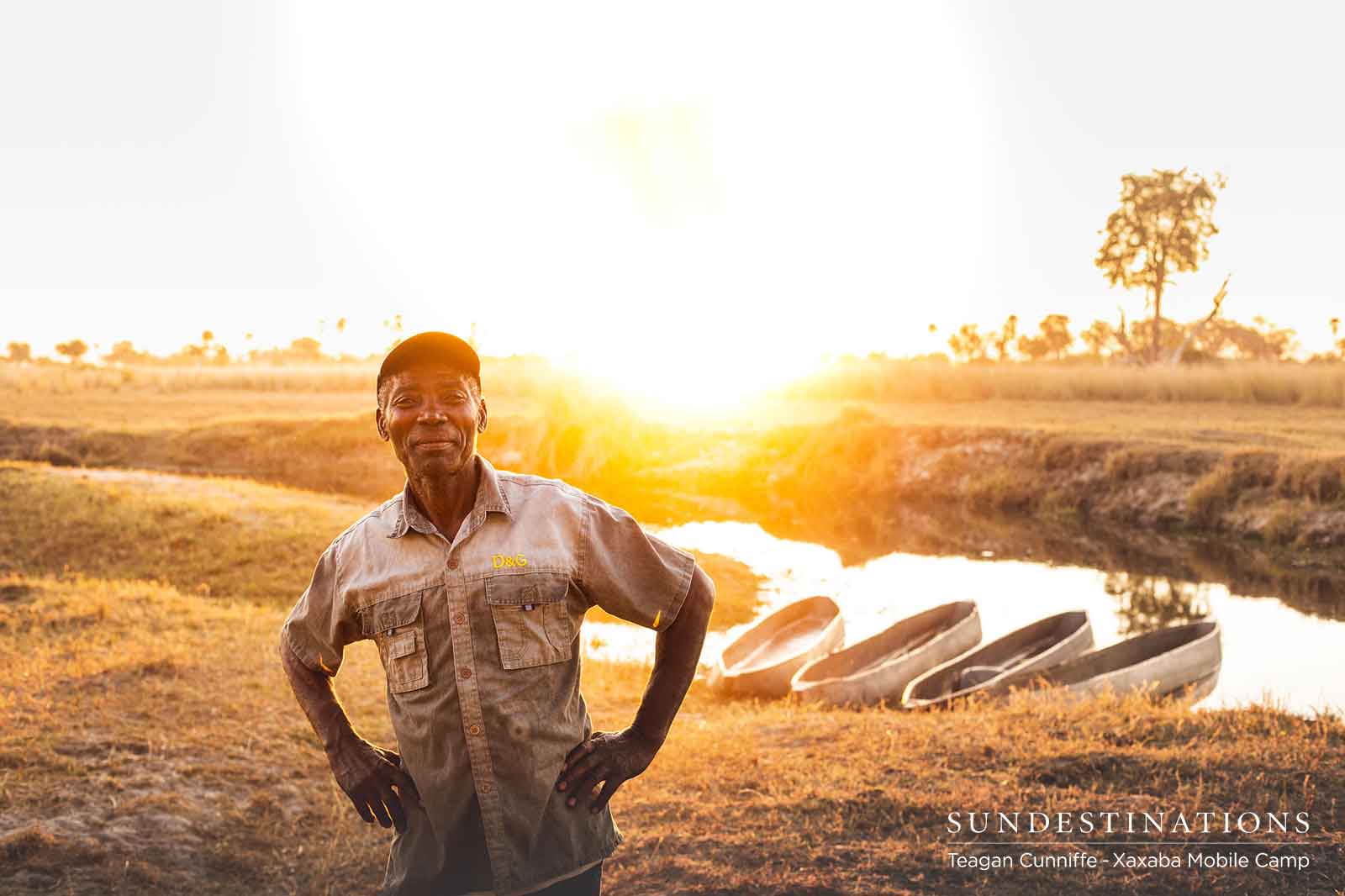 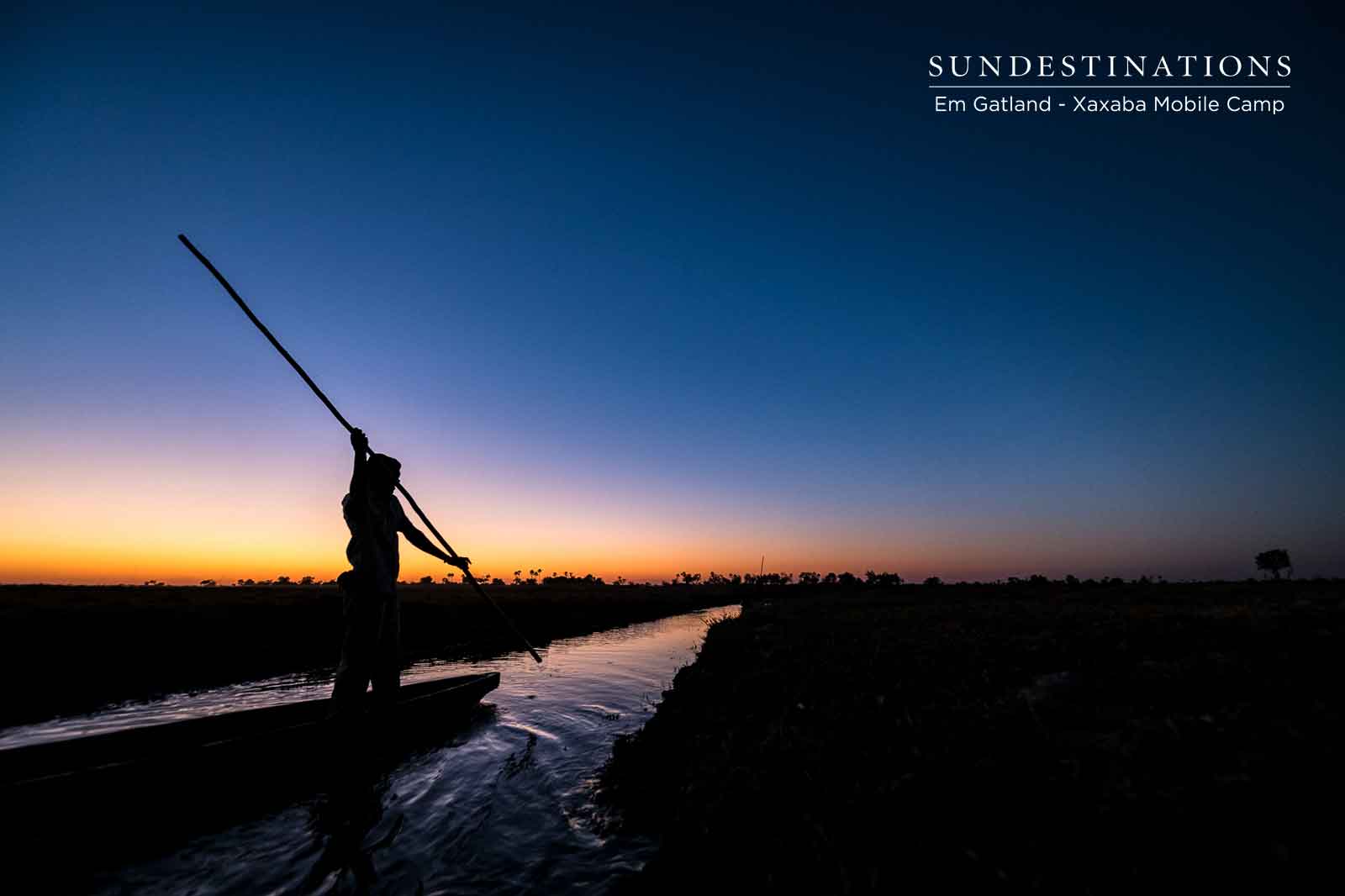 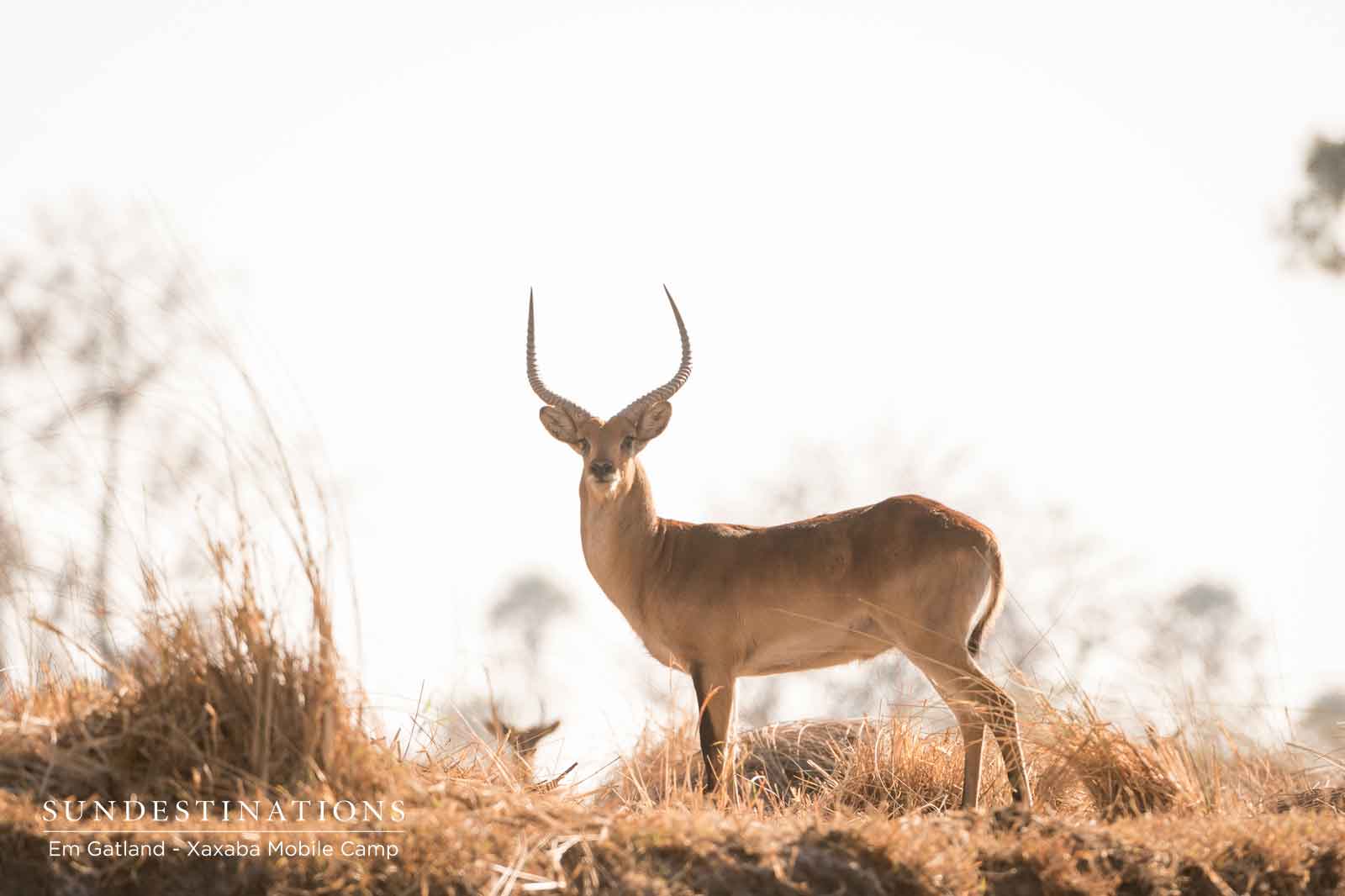 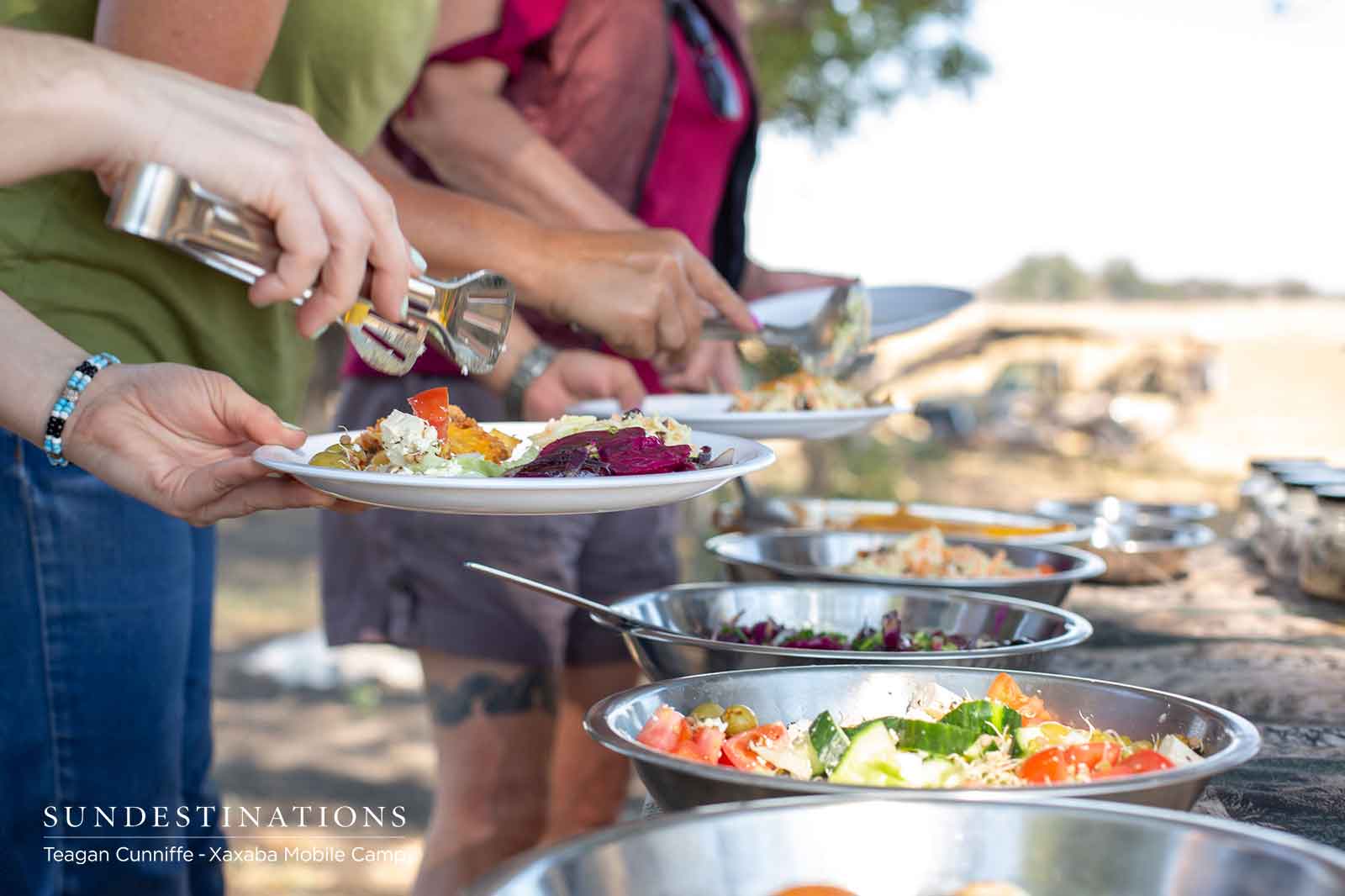 To experience the true Okavango Delta, you have to forgo the luxuries, forget about the frills and really just immerse yourself. And how better than with a rustic community-run mobile camp on a Delta island?

Now don’t get me wrong, a stay at Xaxaba is not exactly roughing it, and you won’t have to lift a finger. The camp, set up in three different locations on a remote private island in the Okavango Delta, is run by Afrika Ecco Safaris from the local Xaxaba community, and these gracious hosts won’t ever let you want for anything.

Six meru-style tents are set up on this wild island prior to your arrival (‘mobile’ means the camp’s location is dependent on wildlife, water levels and weather, and moved around accordingly) and each contains two raised beds, but little else. Although the camp has no electricity; solar lights, bucket showers and delicious food cooked to perfection over the coals mean you won’t miss it for a second. In any event, a social media- and general smartphone detox is good for the mind and even better for the soul (bring power banks or extra batteries for cameras).

The island overlooks the well-known Chief’s Island in the Delta, and guests of Xaxaba will also get the opportunity to explore Chief’s island on an exhilarating guided walking tour. On-foot safaris may serve up anything from elephant and hippo sightings to crocs and even lion. Chief’s Island is a massive sand archipelago that covers nearly 1 000km2 of the alluvial waters of the Delta. Chief’s is particularly famous for its predators; the variety of lechwe, impala, zebra, buffalo, wildebeest and tsessebe that graze on these verdant plains naturally attract lions, hyena and plenty of leopard too. So keep your eyes peeled for big-five predators! Also make sure to bring a good pair of binos on the walk, as the diversity of birdlife in this part of the world is simply astonishing. Marabou storks sit atop their nests and survey the Delta like clumsy traffic wardens, while long-legged African jacana pick out prey from among lily pads, and yellow-billed kites keep a stoic eye from on-high.

If walking safaris aren’t your bag, don’t fret. Mokoro (a traditional dug-out canoe) trips are a lot of fun, too. Expert polers guide you through the veined waterways of the Okavango, and you’re certain to see elephants grazing on banks or hippos’ periscope snouts poking above the surface as you pass. Don’t worry though, the polers know these waterways like the backs of their hands, and they won’t risk getting too close to dangerous game, or invite any sort of danger. So sit back and enjoy one of the greatest wildlife spectacles on Earth in the same way humans in this part of the world have been doing for millennia – from the dug-out cockpit of a mokoro.

For those who like their water vessels with a motor strapped on the back, boat safaris are available too. It’s one of the greatest ways to view game, so look out for the countless herbivores that graze these flood plains, and for the predators that stalk them. Your skipper and guide will often stop at a predetermined sundowner spot, and you’re unlikely to ever see a more staggering sunset than here: the twilit sky’s multihued streaks reflected in the snaking waterways, framed by silhouettes of elephant and other animals drinking from its banks really is a sight to behold. And how better to enjoy it all than with a crisp G&T?

Then, after a busy day exploring on foot and by boat, the staff of Xaxaba prepare delectable meals which are enjoyed around a roaring campfire under a bright canopy of stars.

Five-star lodges in this part of the world are not only beyond exorbitant, but they also don’t give you the real McCoy experience of the Delta, so to speak. Plus, staying at Xaxaba gives a glimpse into the communities that for centuries have called the Okavango home, and allows you to give something back. It also lets you experience this watery eden in a way that is slightly closer to the rustic safari experience that the first explorers into this region would have enjoyed – sans electricity, sans bells and sans whistles. Because, really, all you need is good shelter, good food, good company and a keen sense of adventure. The way Africa should be experienced. 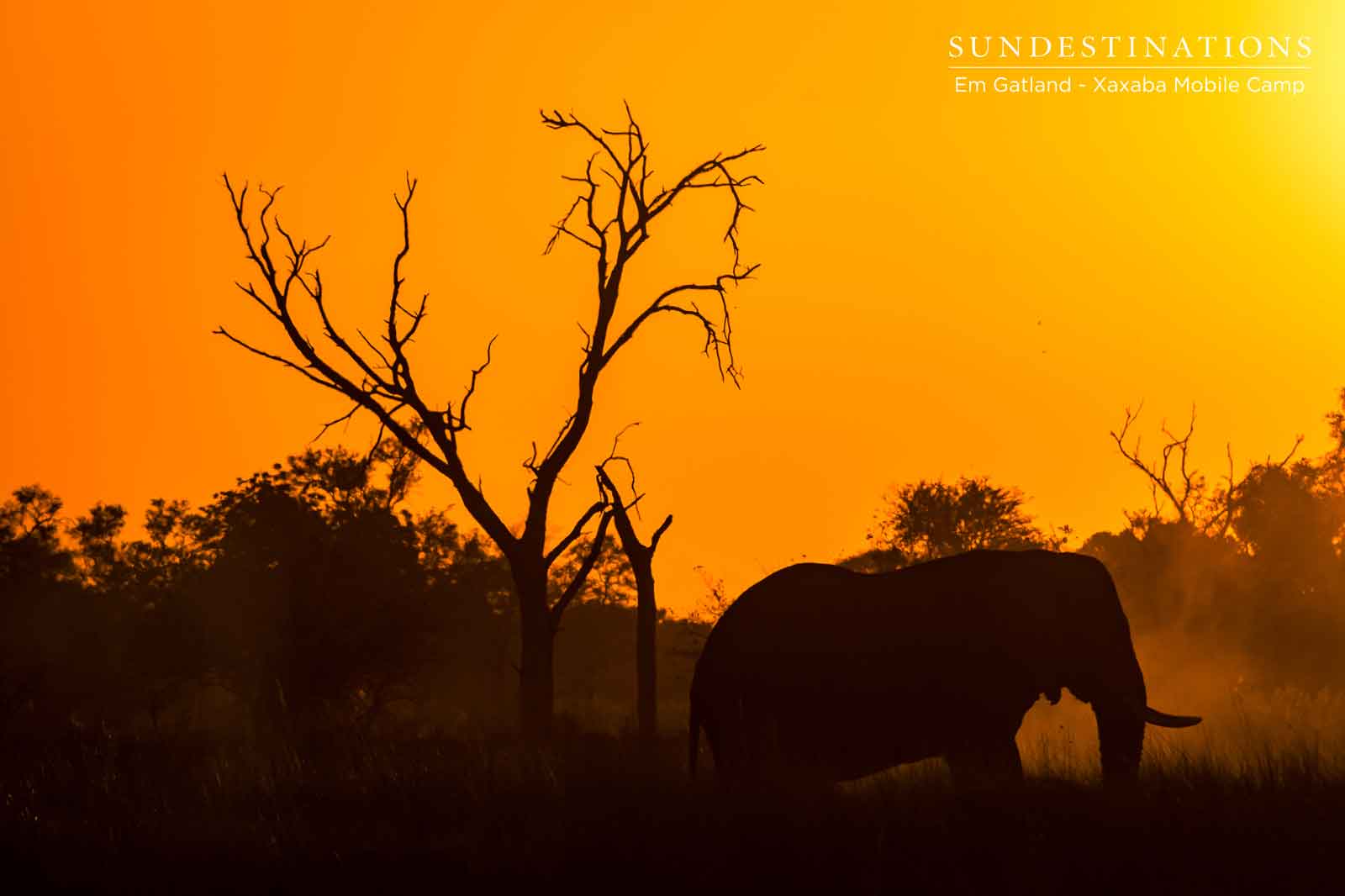 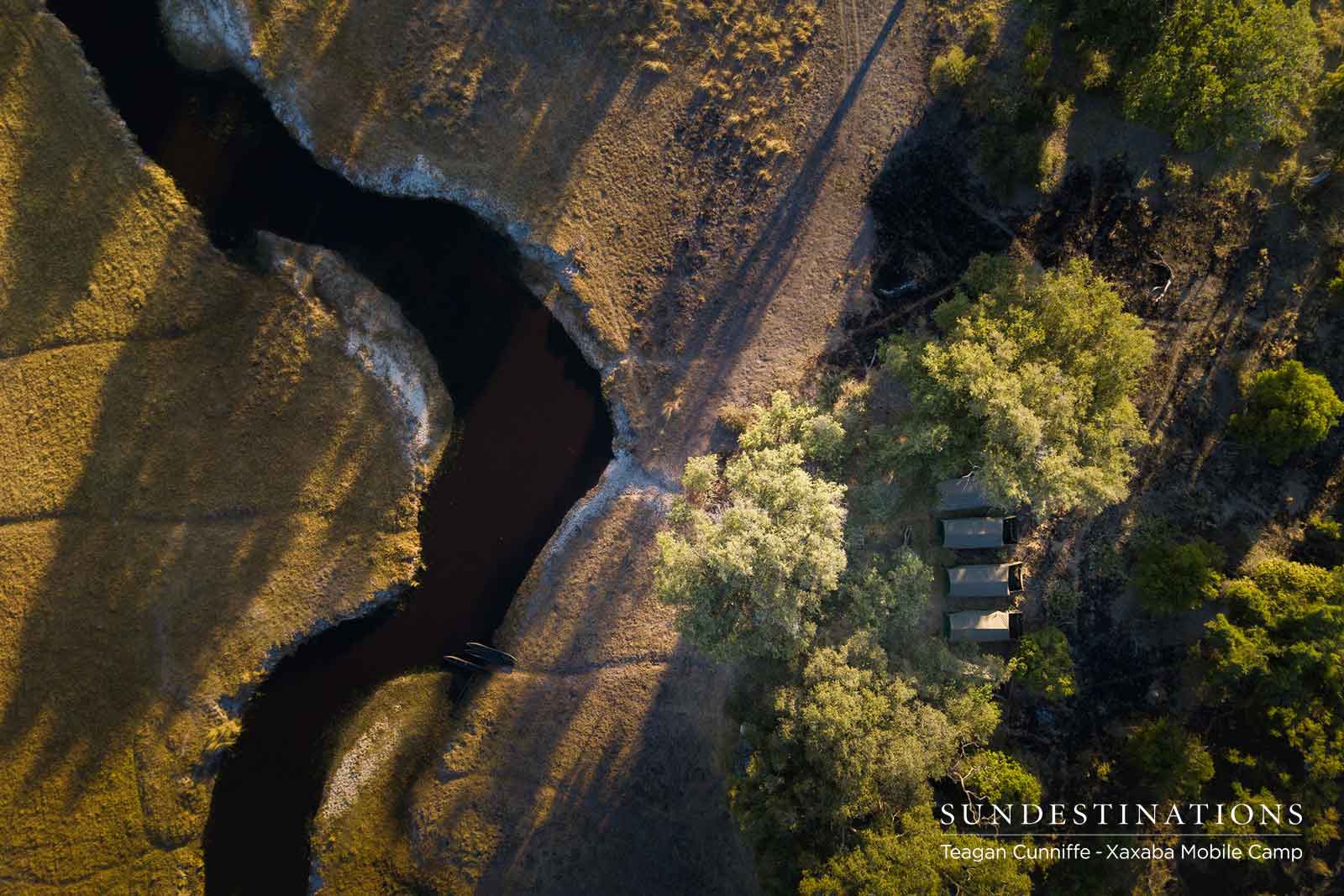 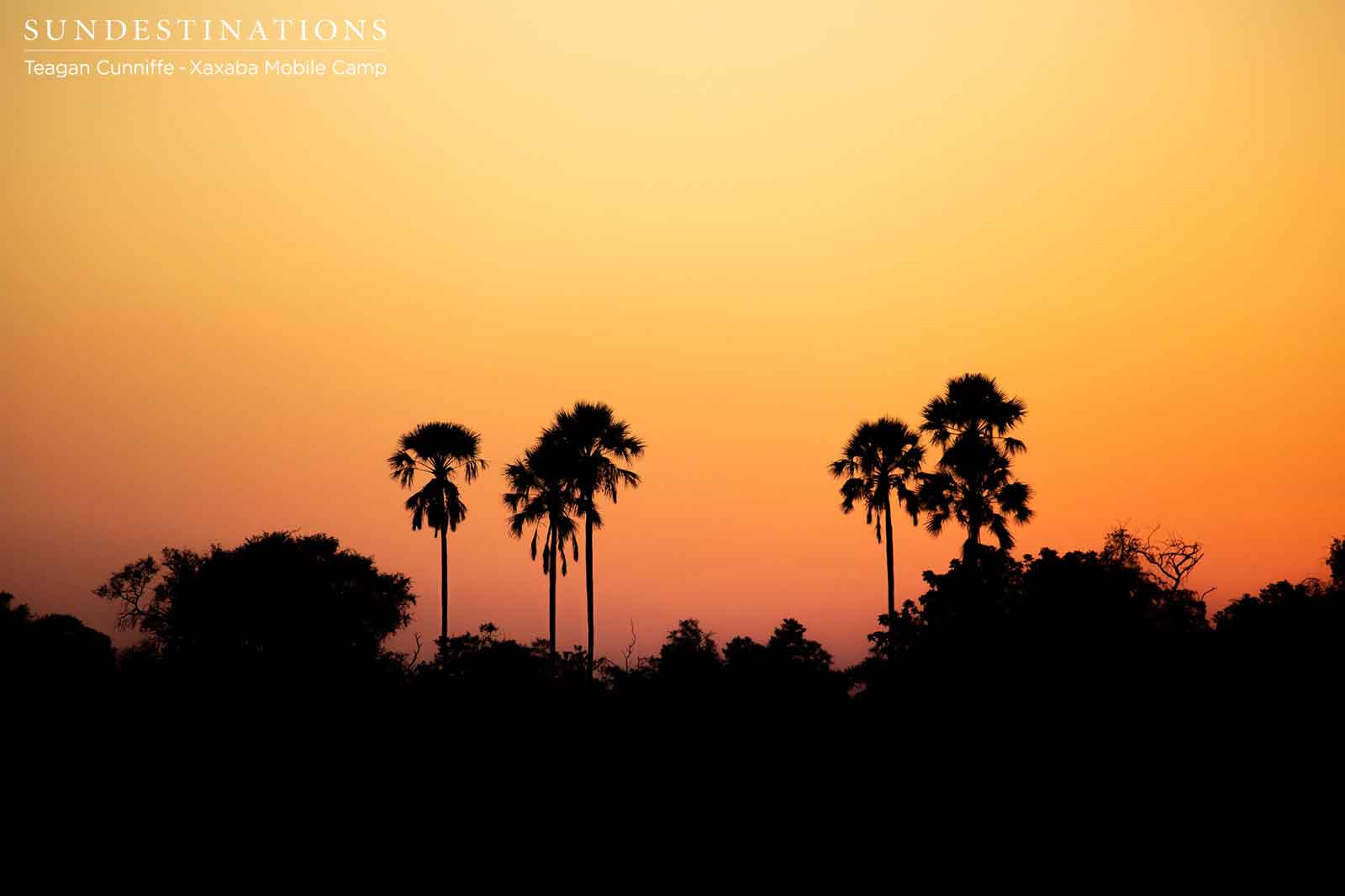