Astounded by Our Daily Leopard Sightings at Klaserie Camps 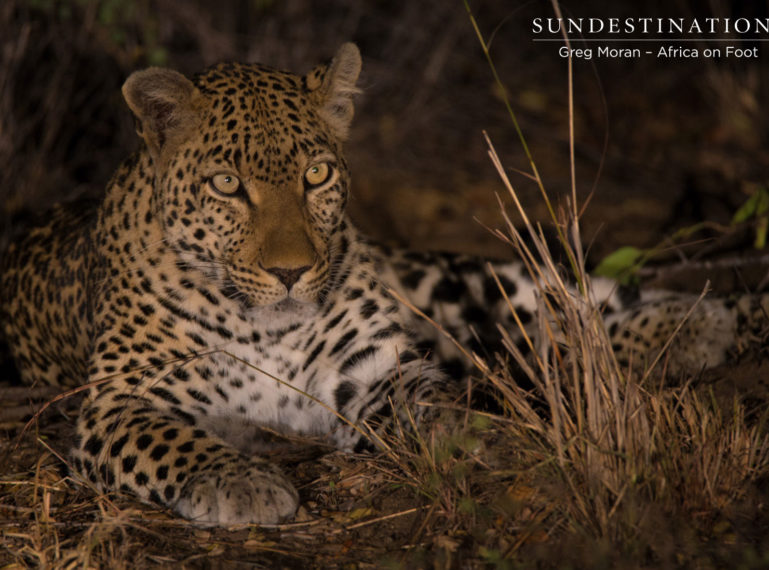 First-time safari goers generally come to the Kruger to see our big cats in their natural habitat, which comprises a mix of marula trees, leadwood trees and belts of unforgiving mopane bush. Plenty goes on in the bushveld, unseen by the human eye. Our master stalkers and ambush predators hide deep within the bushveld and generally come out when we least expect it. Welcome to Africa, where life can be unpredictable and entertaining at the same time.

The big five is an obvious drawcard to visitors, but there is something about the powerfully built lions and lithe leopards which excites guests. Of the two, the majestic leopard is the most elusive. Given that lions spend up to 20 hours a day sleeping, they’re often easier to spot. Our rippling leopards tend to spend time hiding in drainage lines, seeking shelter under aggressive acacia scrub and patrolling their turf while calculatingly avoiding the limelight.

Can you imagine our luck when the team at Africa on Foot and nThambo Tree Camp spotted leopards 4 days in a row? Three different leopards exhibiting an array of behaviours over 4 consecutive days = game viewing success!

Day 1: While out on evening game drive, A-team rangers Mike and Greg looked over at the horizon and decided it was time to celebrate the golden hour. Sunsets in the Klaserie are a highly celebrated event. Just as the drinks were poured, rangers excitedly asked guests to drop everything and jump in the vehicle. Word came through of a possible leopard sighting. These elusive wanderers don’t hang around for long, which means you need to move to quickly to the location of the sighting. The team arrived just in time!

Guests from Africa on Foot enjoyed a glimpse of an unknown leopardess carrying a dead side-striped jackal. She’d stashed the kill under the tree and swiftly returned to the area to snatch it up and head to the nearest tree. Casually strolling in front of the game viewer, she quickly looked up at the occupants and continued walking with determination.

Day 2: After day 1’s enthralling sighting, things escalated. That evening, an unknown leopardess was spotted relaxing under a tree. She had an impala carcass intertwined up in the highest branches, safely stashed away from thieving predators. Both nThambo Tree Camp and Africa on Foot enjoyed lengthy sightings of the female, who was quite happy to spend a bit of time in front of the camera. Day 3: After day 2’s incredible sighting, things escalated even further. A real if-you-blink-you’ll-miss-it moment. Over the crackling heartbeats of the walkie talkie, a feint voice alerted the nThambo team of yet another leopard sighting. As the game viewer pulled into the sighting, the female from the night before was dining on her delectable meal in the fork of the tree. A lone, loping hyena was frantically circling the trunk of the tree, hoping for a morsel. Out of the bush emerged a large male leopard, growling and agitated.

The female growled back, guarding her meal with fervour. The male scaled the tree and, quite literally, smashed the female out of the tree! He grabbed the carcass and came down from the tree and the head of the impala fell into the jaws of the hyena. While the male leopard was mid-jump, he dropped the impala head, leaving it for the hyena to devour.

All that drama and the hyena still walks away with the prize.

Day 4: Day 4 creeped up quietly and there were whispers of leopards. Lo and behold, Cleo the leopardess appeared. She’s a firm favourite on the traverse and easily recognizable by the small notch in her ear. Africa on Foot rangers responded to the sighting first. A guest noticed her in a fully relaxed state draped over the branches of a tree.

Cleo spotted a steenbok (small antelope) below and darted down in stealth mode. After proving unsuccessful in her stalking, she hopped back into the tree. Another steenbok foolishly approached the vicinity and Cleo reverted back to her quick stealth mode. Then promptly jumped back into the tree! nThambo rangers moved into the sighting and were also treated to a game of Cleo antics.

Quite a successful string of sightings on the traverse. Right now we’re certainly doting on our daily leopard sightings within the Klaserie!