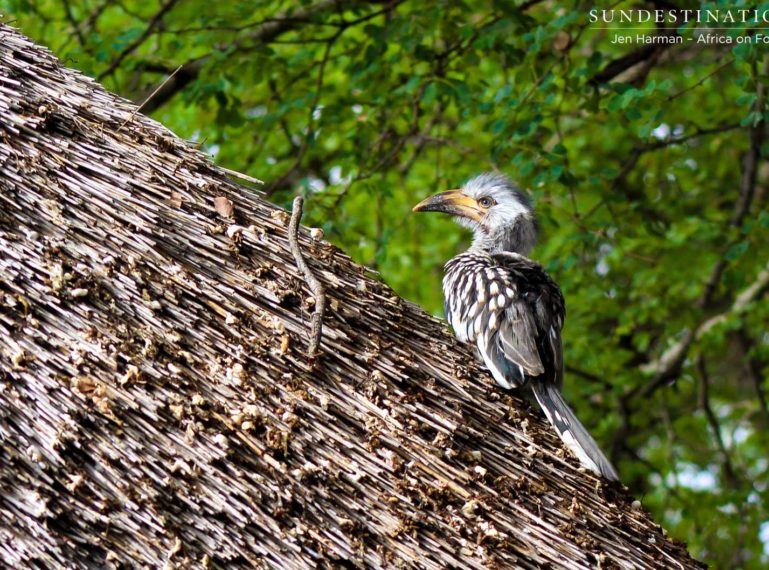 This time last year, we reported that we had witnessed red-billed hornbills leaving the nest at Africa on Foot, and now, a year later, the same thing has been recorded, except that this time it was a yellow-billed hornbill chick! Catching this sort of intimate act of nature in action is very special, and we are lucky to have this repeatedly used nest in the tree between the kitchen and dining room to monitor. Hornbills are known to reuse suitable nests year after year, and they seem to quite like this particular hole in a tree, giving us the pleasure of watching the nesting process year after year. Curiously, last year we had to wait until the chick finally left the nest to tell whether it was a red-billed or yellow-billed hornbill, because the parent birds of both subspecies were seen maintaining the nest and feeding the chick inside. It turned out to be red-billed then, and yellow-billed now! Interesting that the two different families utilise the same nest.

Africa on Foot camp manager, Jen, managed to capture the moment the young chick fled the recently, offering this incredible look into the bird’s first moments in the big, wide world. First, the mother exits a small hole made in the otherwise sealed nest, and she will continue to fly back and forth with the male parent feeding the chick for its last short while in the nest. Eventually, the baby bird, fully feathered, is finally ready to leave the nest. Take a look at this incredible photo sequence of the once-a-year event: