Two species. One sighting. Both vastly different in their take down of quarry and execution of kill tactics. This is the story of how local leopardess Ross Dam had her fragmented carcass stolen by a pack of unscrupulous wild dogs. Only the marula tree where she sought refuge will know the true version of events that unfolded in this section of land that borders the confines of our traverse. Africa on Foot and nThambo Tree Camp witnessed the scuffle as it began, but what happened before the untimely death of the impala kill will forever remain a mystery stashed into the vault of stories that the bushveld holds. 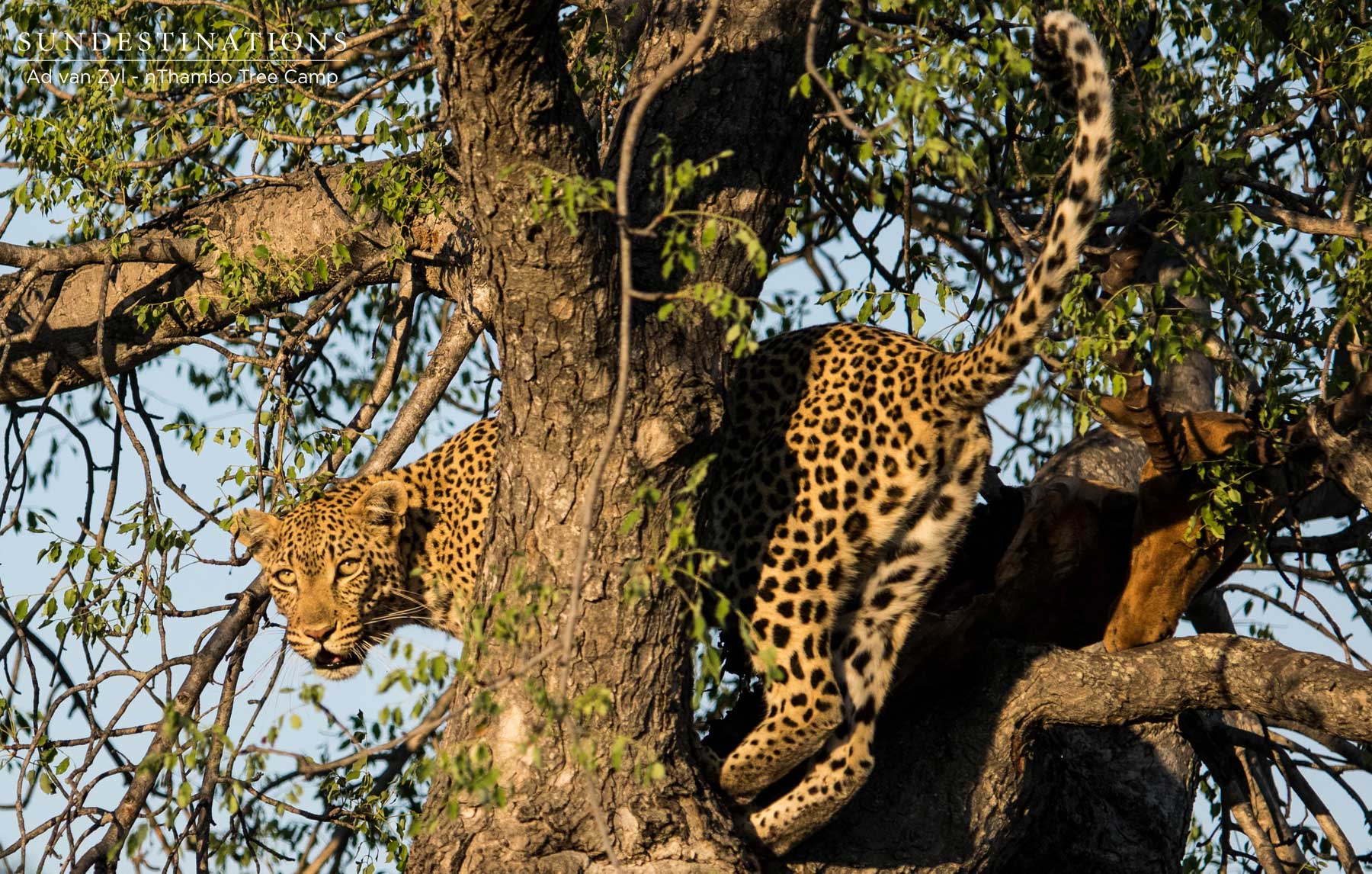 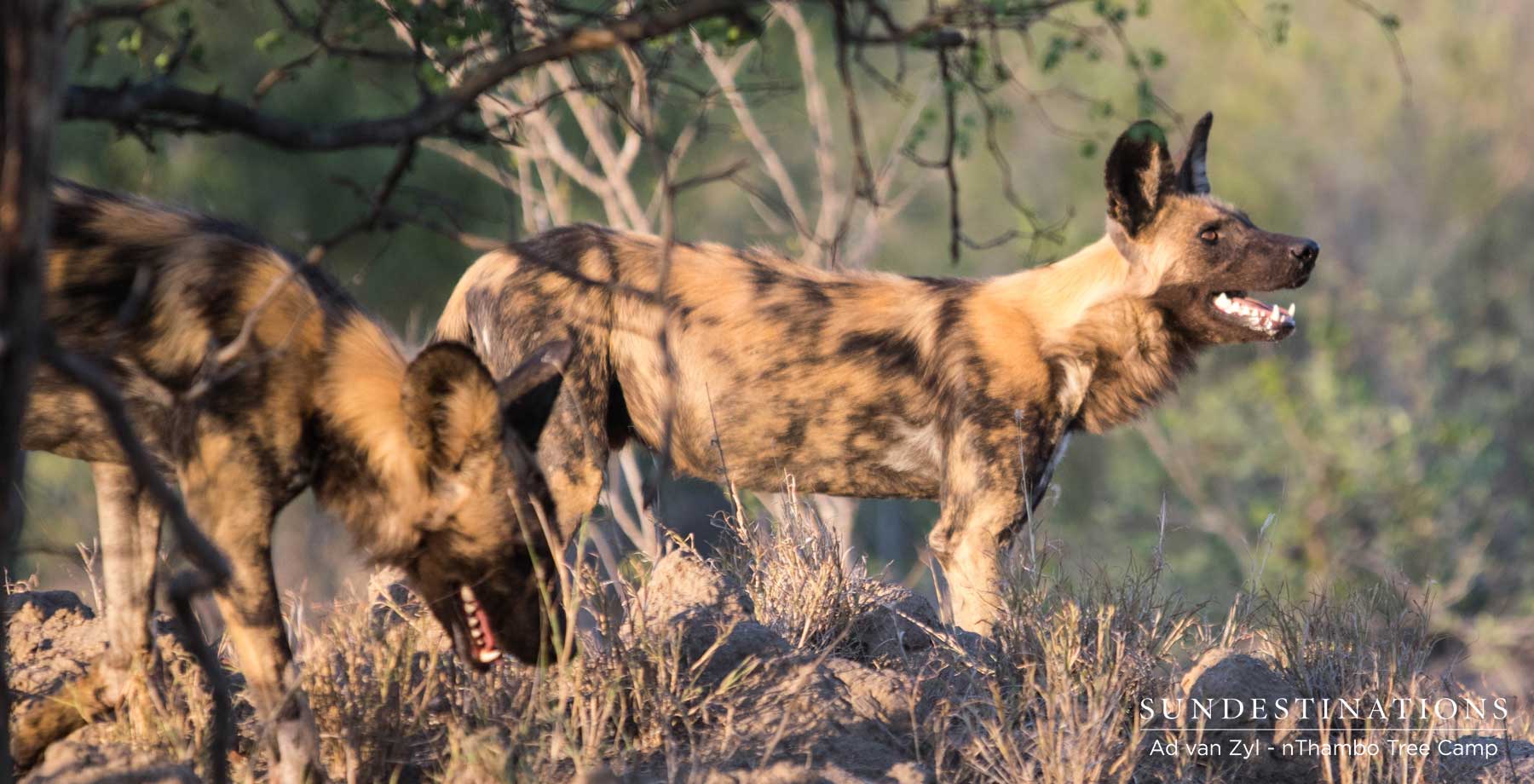 Trotting through the recently replenished bushveld, the endangered African wild dog seeks out potential prey amidst the dense shrubbery and knob-thorn thickets. Affectionately known as “painted wolves”, these nomadic dogs together with their gregarious packs will cover a wide range to find their ideal quarry.

Their hunting skills are like a well-oiled machine, but one that thrives on blatant behaviour. Dogs will simply identify a weaker or younger member in the herd, walk straight towards their target and a chase will ensue. Identify – pause – engage. A string of behaviour typical to animals that are classified as sighthounds. Wild dogs are coursers and will chase their prey until the point of exhaustion, after which they will attempt to disembowel their prey. Despite the kill method sounding rather sadistic, the prey actually dies quite quickly. Like most wild animals, if dogs come across a free carcass without having to conduct a kill, they will naturally attempt to eat it and displace other predators from the carcass.

The techniques and social lifestyle are in great contrast to our more aloof and mysterious leopard species; a cat that hunts with solitary craftsmanship. A leopard’s method of hunting is different to the wild dogs – they thrive on the art of camouflage and ambush, utilising their stealth and grace to conceal their presence. It is only the alarm calls from plains game and birds that alerts the target of a possible threat.

Once the kill has been made, a leopard will need to drag its prey to safety before the scavengers and other predators get wind of the fresh meal. They will normally hoist their kill high up in the tree, or hide it in dense bushes. Leopards can be opportunistic and will steal prey, provided the conditions are non-threatening – leopards are not normally confrontational.

In this frame we have two completely unrelated species vying for the same prey. Now that we’ve delved into the depths of how each species conducts kills, you can probably ascertain what might have happened prior to the arrival of our game viewers at the sighting.

Here’s how we ended up in this enviable position of our vehicles being slap bang in the middle of a leopard and pack of wild dogs.

Rangers had a glimpse of the wild dogs on the road and followed them onto traverse where only Africa on Foot and nThambo Tree Camp have access. The dogs stopped at the base of the marula tree where a leopard (Ross Dam female) was guarding and hovering over an impala carcass – she was probably about to hoist it up the tree. They chased the leopard and displaced her from the carcass, and Ross Dam sought solitude in the fork of the tree. The dogs tore at the remains of the carcass, while Ross Dam watched over them in anger. She could be heard hissing, growling and baring her teeth. The dogs eventually moved off, and Ross Dam descended from the tree, snatched the carcass and stashed it in the fork for safekeeping! Just another average day here in the Klaserie. 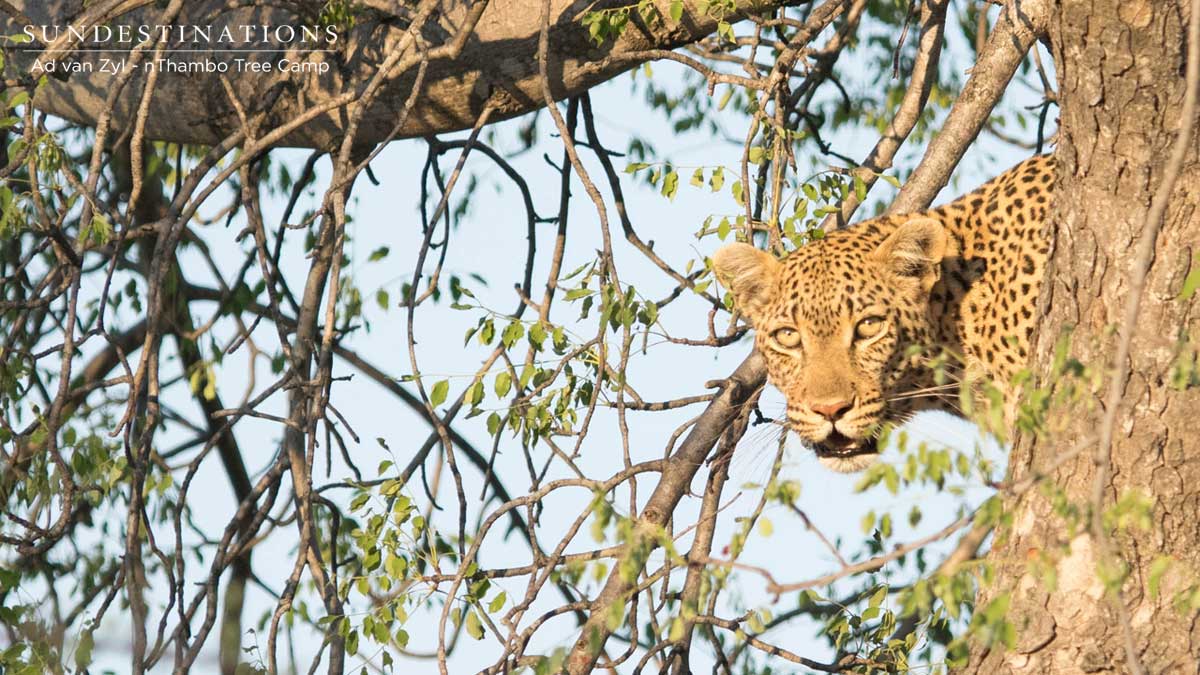 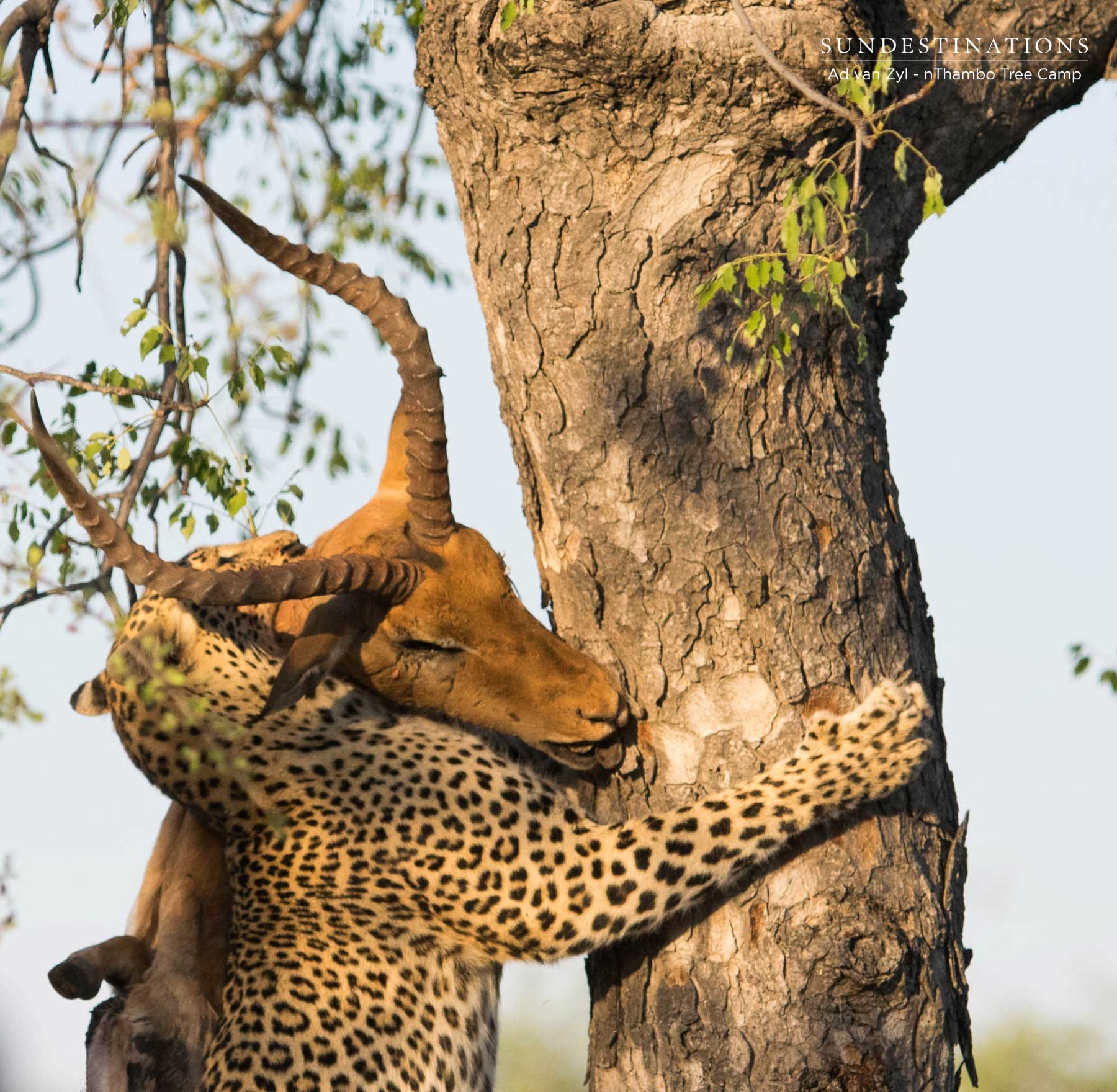 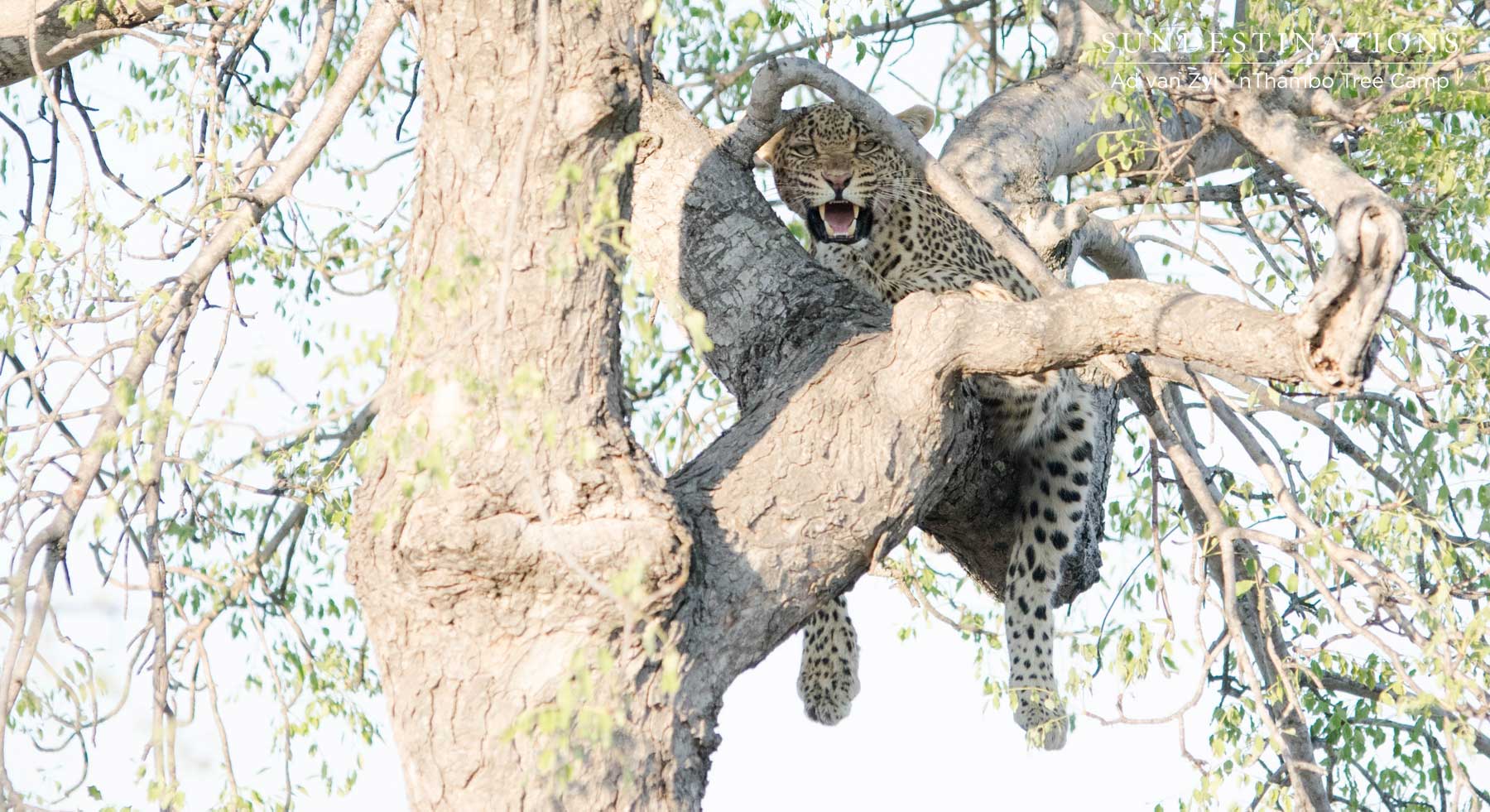 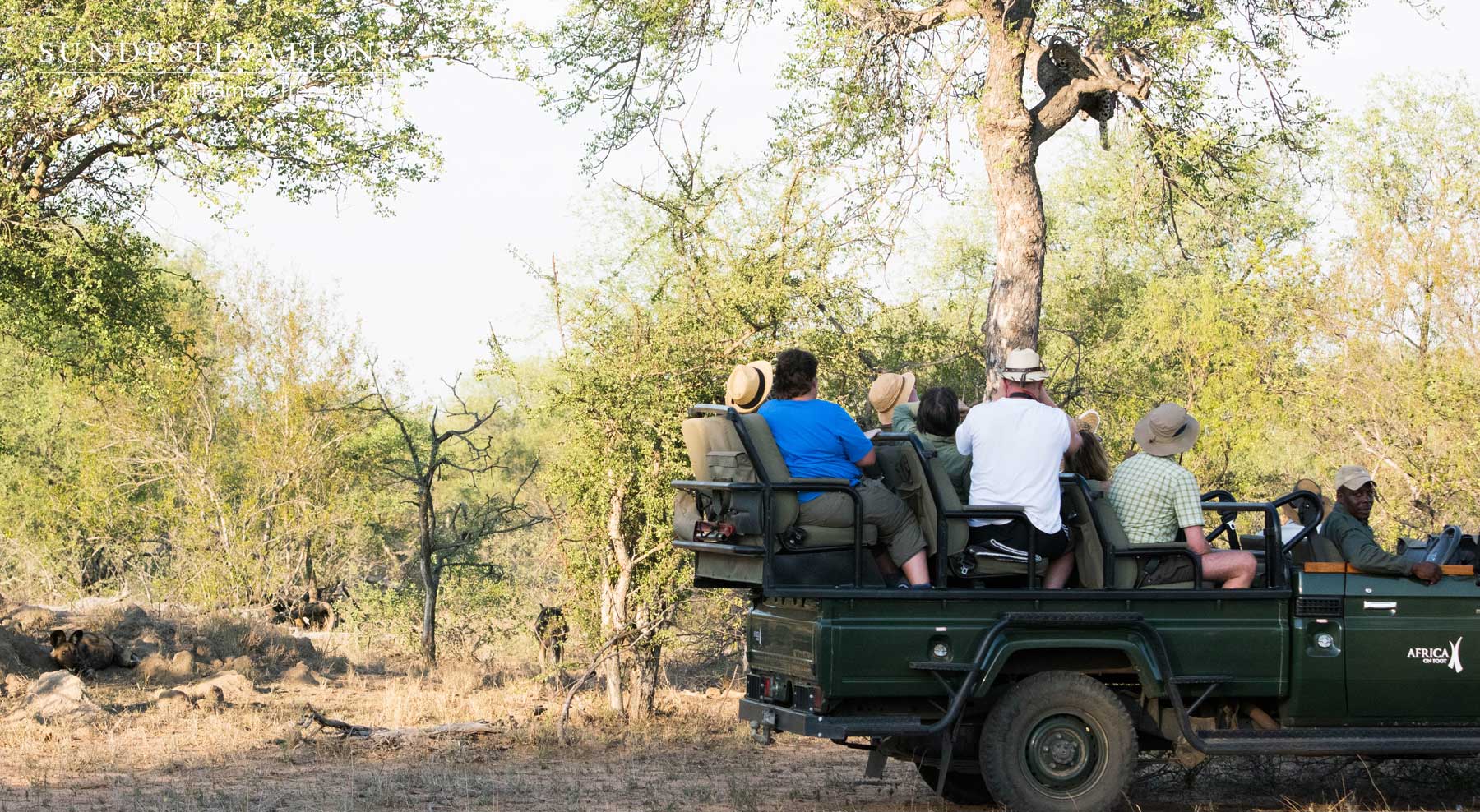 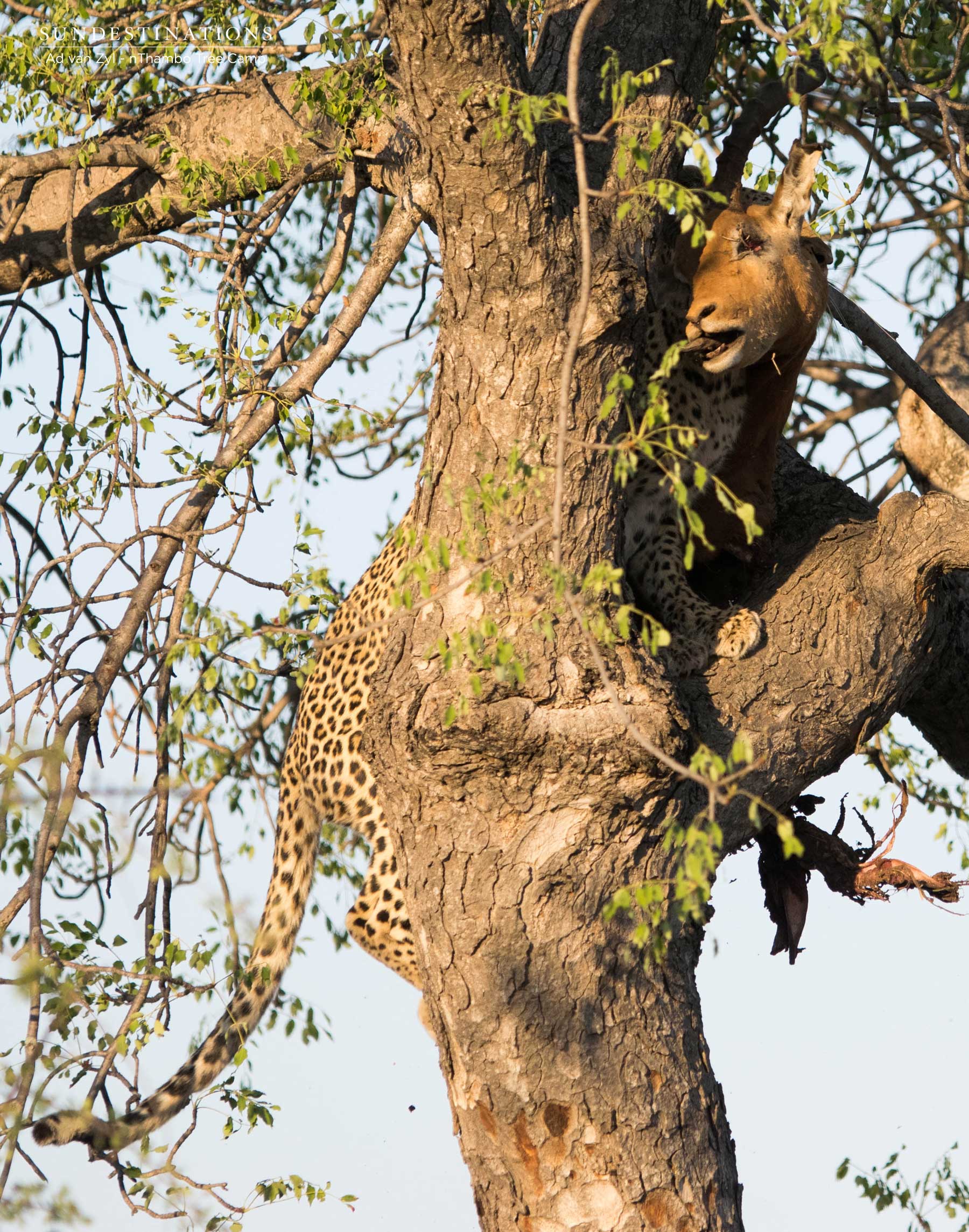 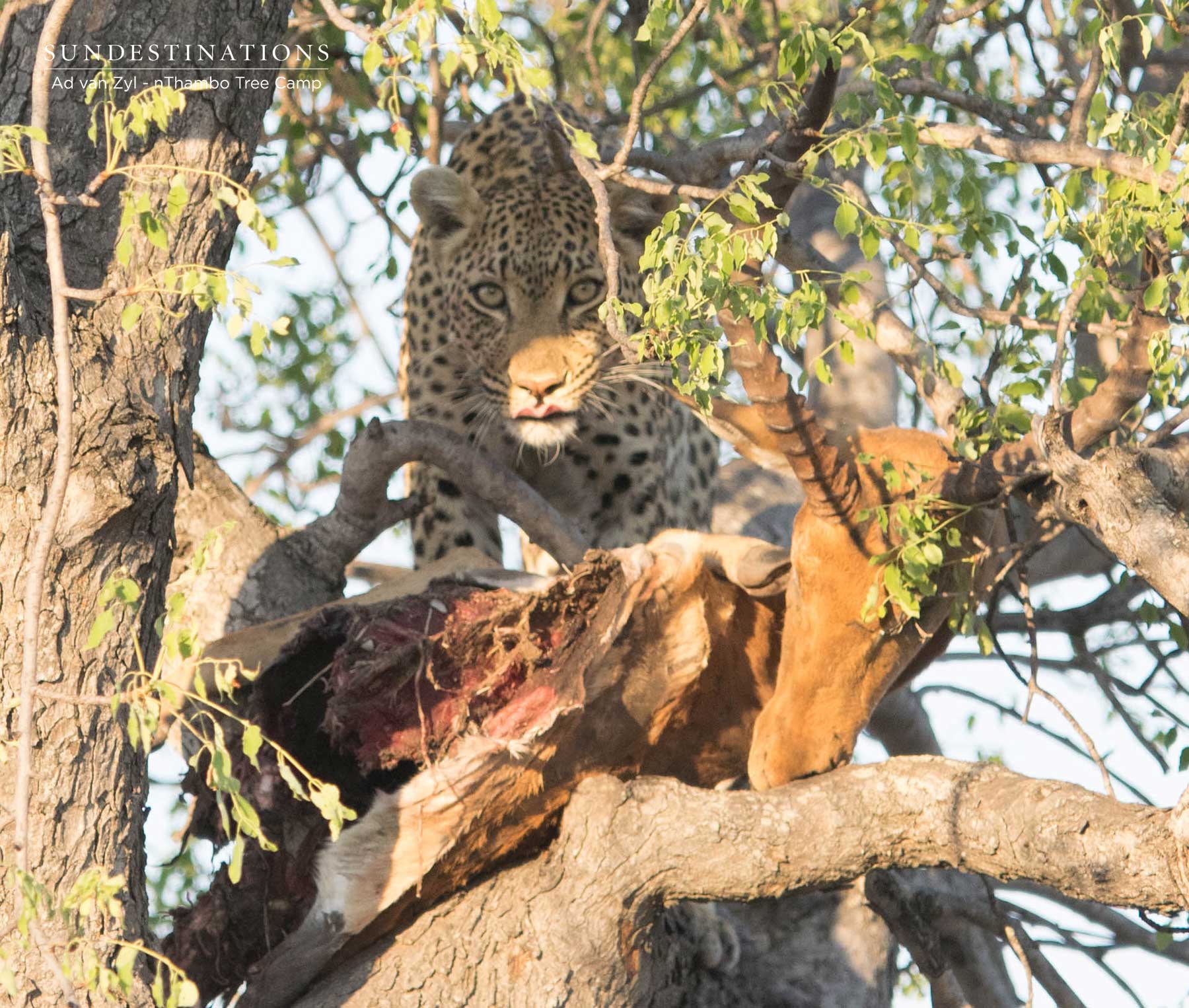 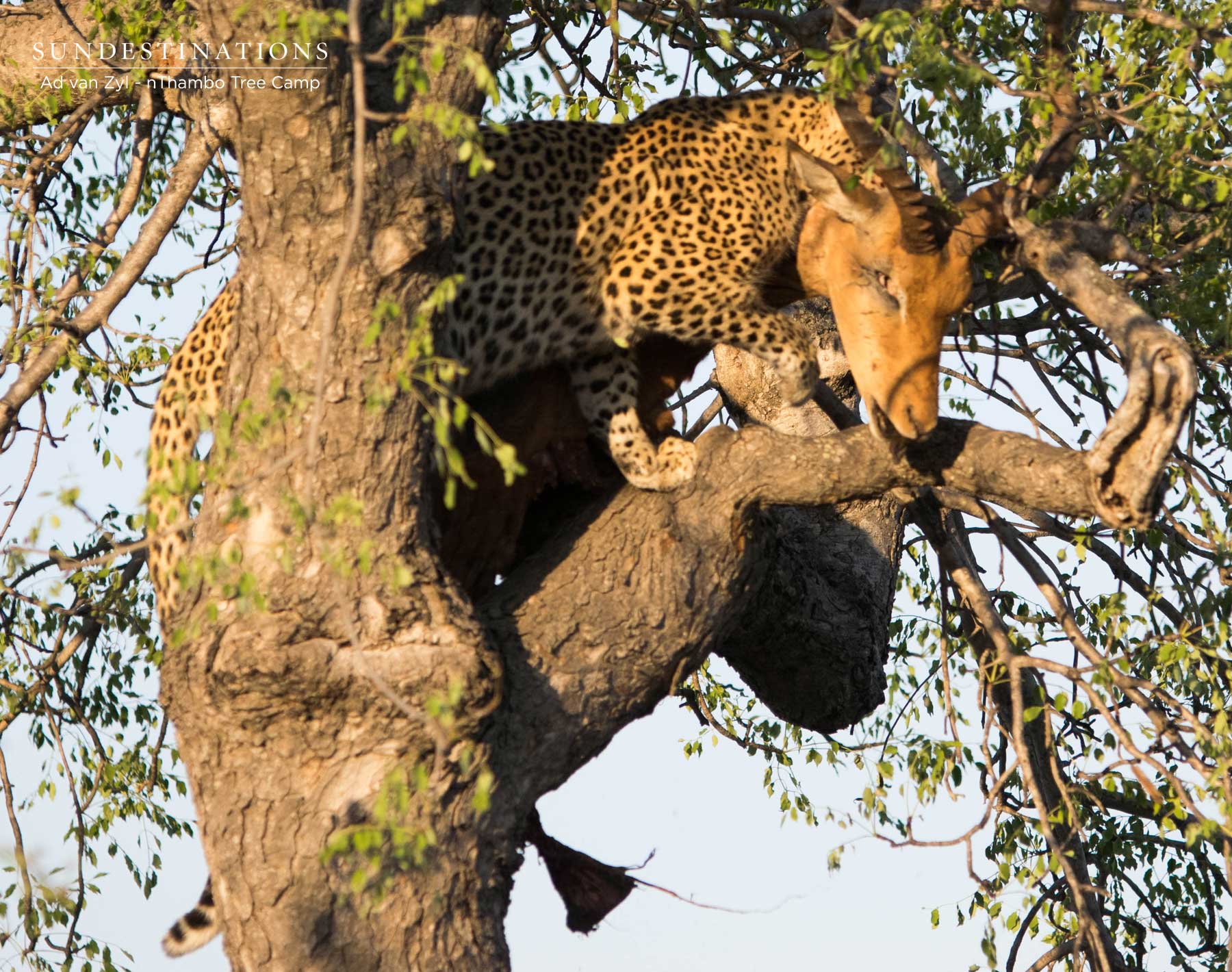 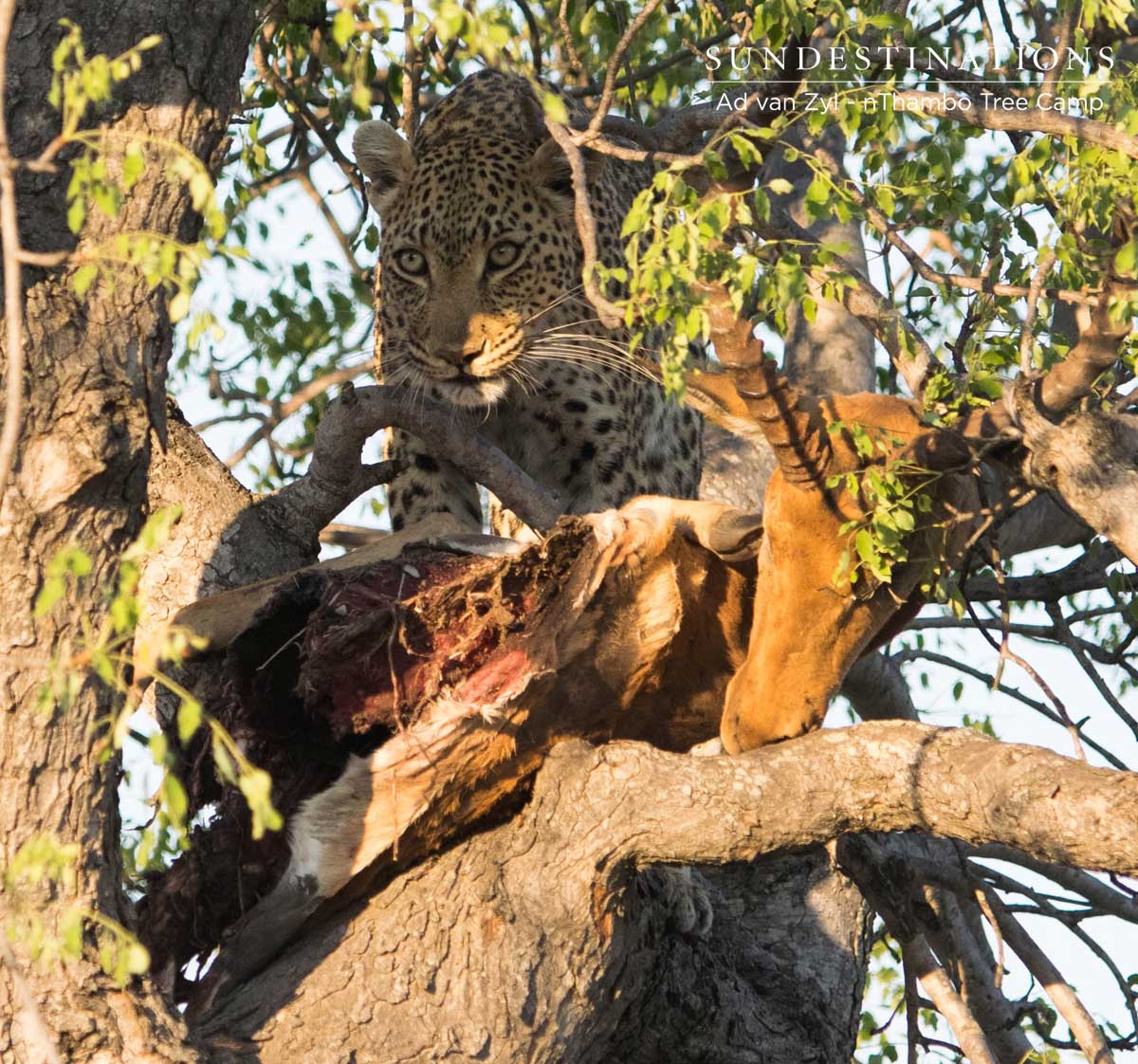