Leopard and Her Cub in Klaserie 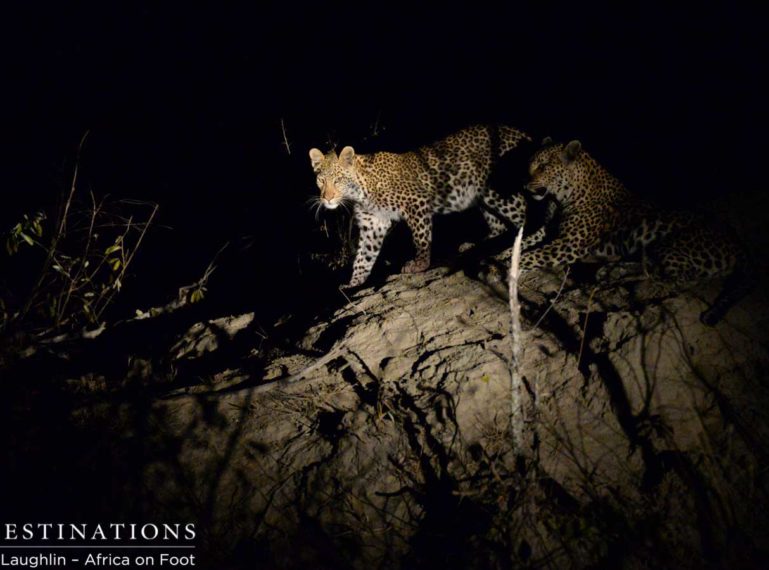 It was one of those nights in the Klaserie when all of a sudden the radio announces something you’ve been hoping for. After locating, losing, and relocating a female leopard in a drainage line area, teams at Africa on Foot and nThambo Tree Camp were beginning to lose hope, until Matt’s excited yet controlled voice issued through the news we had been waiting for. The leopardess had come to rest on a termite mound and was seemingly ultra-relaxed. After visiting a lazy Trilogy male lion and bumping into herds of elephants, the game drive had already been satisfactory, but when guests arrived at the scene of this beautiful spotted cat illuminated in the spotlight, everything else melted away. The story was that she had killed a steenbok and the carcass was lying nearby, just out of guests’ vision. Word was that this particular female is the mother of a cub, but it was not in the sighting… Not yet, anyway. Matt pulled out of the sighting and handed the reigns to Mike who was waiting for the signal to bring Africa on Foot guests into position. A hum of excitement rose into the night air as cameras clicked away to capture the vision of this big cat relaxing in her territory. And then, a rustle from the foot of the termite mound sent the spotlight searching through the dry vegetation. Knowing that there were hyenas hanging around hoping to get a taste of this leopard’s dinner, we expected to see just that emerge from the darkness, but as Enoch’s sharp tracker-eyes adjusted to the light, what he announced was “another ingwe“. Sure enough, it was her cub. The youngster bounded up the termite mound to greet its mother and remained there for a short while before targeting something down below and once again disappearing from sight. Feeling incredibly fortunate to have seen both a mother leopard and her cub, Africa on Foot guests headed back to camp for dinner and, no doubt, a photo sharing session!