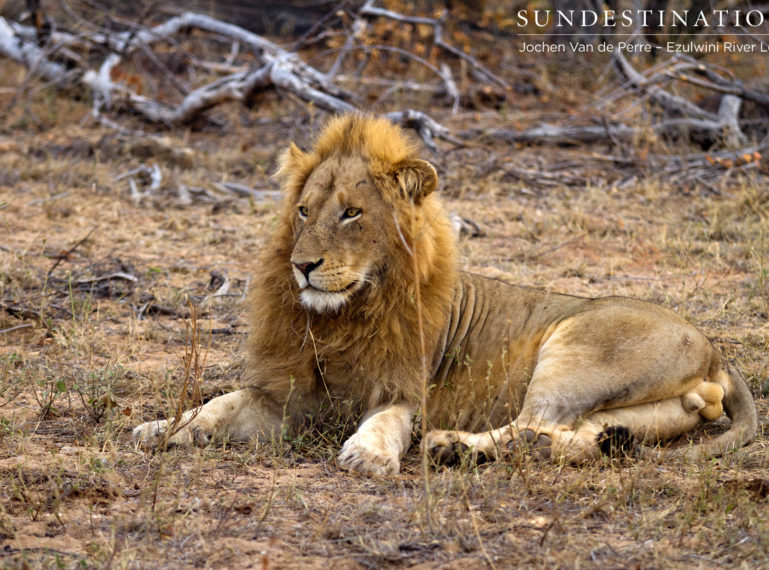 Ezulwini Game Lodges have come to know a number of lion prides that occupy parts of their traverse in the Balule Nature Reserve, but the Singwe Pride is not usually one of them. That changed just recently when one male lion and two lionesses were spotted on Ezulwini River Lodge access road, and speculation has it that this is part of the Singwe Pride very seldom seen in this neck of the woods! Ezulwini has become quite accustomed to epic lion sightings. Being located in the Balule Nature Reserve, which shares unfenced borders with the Kruger National Park, game drives are an experience of thrilling wildlife viewing and unpredictable and diverse big game sightings. Lions can be somewhat predictable (although that is a dangerous word to use in the wild world!) in the sense that once a pride has established its territory, it is likely that we will see them in that area. We’ve mapped out a general idea of where these territories lie and which lions are seen where, but we have certainly been surprised with unexpected lion sightings in the past, so when these unfamiliar lions rocked up at River Lodge, we were pleasantly surprised. The Singwe Pride is known to be dominated by two adult males, and the pride consists of two lionesses, and two cubs – a small unit compared to the larger prides, such as Mohlabetsi Pride and Duma’s Pride, which are seen frequently on Ezulwini traverse. At this sighting, there was only one male alongside the two lionesses, and there were no cubs in sight. This is not altogether surprising because lions do not always move around as a pride, and it is often that lionesses leave their cubs stashed away in a safe place. One of the lionesses showed evidence that she was lactating, which is proof that she must have cubs somewhere not too far away. It’s always fun to shake things up with a couple of unfamiliar lions seen on the traverse, and we can’t help but speculate reasons for their unusual movements. Why are we seeing this pride on our traverse? Will it result in conflict if they are discovered by one of the dominating prides in the area? As we’ve mentioned, lions are relatively easy to keep track of because they are territorial, so we hope to be able to follow up on these guys and confirm that they are indeed the Singwe Pride we’ve only seen once or twice before. On the other hand – this is wild Kruger, and it is possible that these visitors might slink off and not be seen again for a long time. Keep an eye out for our updates!