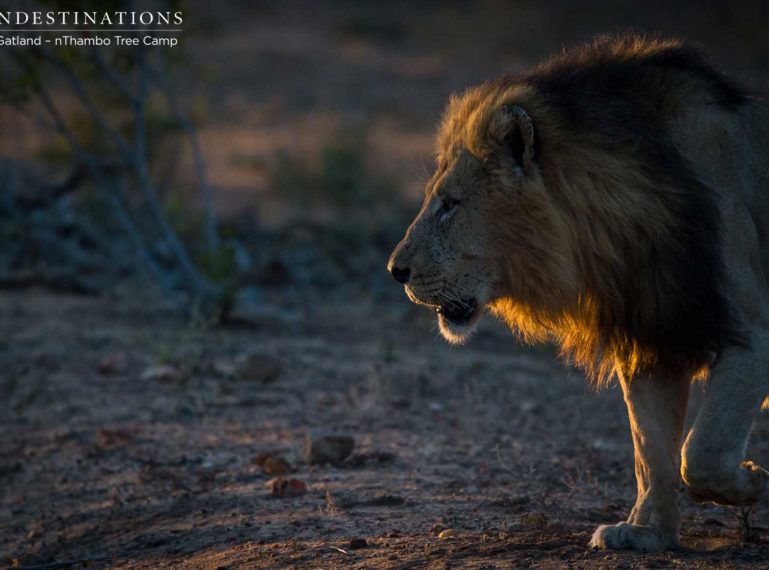 Ultimate warlords, the Trilogy male lions, were seen this morning at first light accompanying the Ross Breakaway lionesses on a potential buffalo hunt. These 4 lions are a formidable force, and they were determinedly following a herd of buffalo, which is likely to result in a good meal for the foursome! Africa on Foot and nThambo Tree Camp both got lucky with the sighting, as the lions were on the move. One of the Trilogy males separated from the rest of the group and was seen for a long while as he paced through the bush, clearly keeping on that buffalo scent. The second male lion and the two females weren’t in sight for very long after they were seen following the buffalo herd at a dam nearby. When lions hunt, they try and keep a close eye on their target, so as the buffaloes moved, so did the cats! This particular Trilogy male has shown a level of dominance among the coalition. When there were still 3 living Trilogy males, this scarred male was the most frequently seen and he was constantly mating with various females. After the limping Trilogy male died, the remaining two kept their ranks in order and continued to dominate the Klaserie. This male’s noticeably swollen elbow does not seem to have slowed him down in any way, and even after a fight with the Mabande male, the Trilogy males remain strong.

Now, there are the Mapoza males to contend with… Stay tuned for the next blog on the lives of Klaserie lions later today to find out more on the Mapozas!