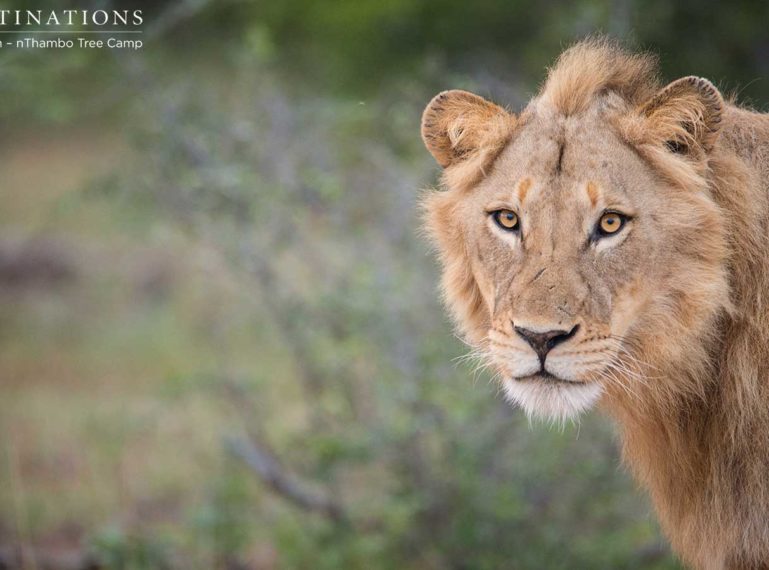 Interesting lion dynamics have hit the Klaserie recently, and this morning was no different! While Africa on Foot guests were out navigating the bush on their morning walking safari with Greg, nThambo Tree Camp guests were trundling through the bush on their game drive, and resident photographer, Kevin, was editing footage in his safari studio. All of a sudden, the distinctive sound of lions calling in near distance alerted the teams listening from their various positions in the veld. The calls were thought to be coming from the area near nThambo Tree Camp, where camp managers and staff would have been hearing the roars loud and clear. Kevin picked up two individual male voices – could it have been the Mapoza males? They have not been picked up in the area and it would have been unexpected for them to turn up at nThambo without having been tracked. These voices belonged to unfamiliar males who were bravely announcing their presence in the Klaserie.

Soon, the guttural shrieks of panicked impala rang out much closer to Africa on Foot where Kevin was listening and communicating with teams out on safari with their guests. The alarm call is a dead giveaway that there is something dangerous putting the impala at ill-ease. Knowing the lions were only a kilometre or so away at nThambo, there was no doubt that the cats had moved closer to Africa on Foot and spooked the antelope, setting them off into a chaotic panic. Kevin grabbed his camera gear and jumped into his bakkie, heading the couple of hundred metres towards the open area at the Africa on Foot access road to where the impala were calling from.

Sure enough, there were the two culprits who had been heard calling near nThambo only a short while before. Kevin watched as the pair of them sniffed at a patch of ground for a long time, expressing their interest and engaging the Flehmen grimace, which is an odd-looking expression allowing the lions to pick up on the pheromones in urine. It is possible that they could smell the urine of other lions and were trying to decode any information they could. The pair of them had enormous bodies and underdeveloped manes, but their faces were fiercely scarred (one more than the other), indicating a history of fighting, as is the norm in the lives of wild male lions. The two males continued to sniff and explore the area. They marked their territory and started roaring – a clear sign of their intention to hang around and declare their territory. These big cats have arrived right on the Africa on Foot property, and we do not yet know who they are or where they come from, but they seem to be prepared to stand their ground. Both Africa on Foot and nThambo Tree Camp guests pulled in to join Kevin in the sighting and watched the amazing scene unfold. Hopefully we will receive some intel from neighbouring reserves and land owners and find out who these boys are! They might have ambled in from the Kruger National Park, but they seem determined to stay where they are.