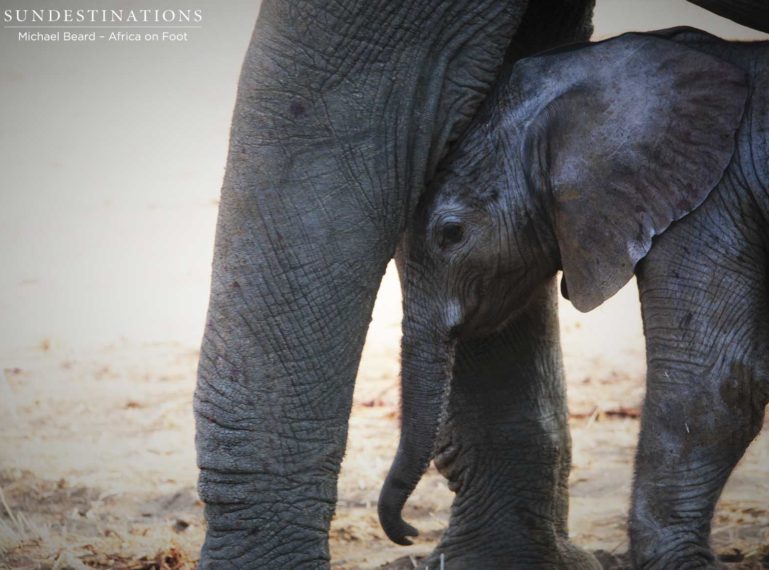 When Africa on Foot guide, Mike, stumbled upon a small herd of elephants standing in a huddle, he was delighted to see there was a small calf hiding in the middle, offering his guests a rare opportunity to see the world’s largest land mammal as a tiny baby. They are among the cutest of the cute, with wildly flapping ears, wobbly legs, and trunks they don’t quite know how to use. After a minute or two at the sighting, the big female elephant picked up a mass of fleshy tissue, which initially looked like the remains of a carcass, and started thrashing it around. Mike and his guests watched in awe as it dawned on them that the baby elephant they were seeing was freshly out of the womb, and that they must have missed the birth by minutes! The mass of tissue was in fact the mother’s placenta, which many mammals are known to consume or bury in order to get rid of the scent, which might otherwise attract predators. We couldn’t have imagined a more incredible scene to witness so unexpectedly. Elephants are known to be emotional animals, and have a very close-knit social structure, especially among the females in a herd. It takes 22 months for a calf to come to full term in the womb, and when the time comes for birth, all the females (all blood-relatives) will position themselves around the mother in labour and create a wall of protection. There is a definite sense of celebration in the herd, and once the little one arrives, all the elephants reach out to touch it with their trunks, as if introducing themselves to the newest member of their family. When the calf tries to stand, it receives help in the form of the elephants’ nurturing trunks, lifting it up and helping it carry its weight on its new legs. They are known to throw grass and soil around and on themselves, as if part of a ceremony. Usually, the evidence of the birth is buried or covered, or the mother elephant will eat the placenta, which hides the scent from predators. This time, however, we watched as the mother elephant picked up her placenta in her trunk and flung it around, covering her body with the blood and tissue. It is amazing to watch how attentive their mothers are with their young, and to watch how they stick close to their mother’s side, and then when they become a little more confident they put on famous attitude-fuelled displays of mock charging and trumpeting at their audience. This little one was still trying to figure out this big new world, and it seemed as if he initially attached himself to the wrong female, while his mother was busy seeing to the afterbirth! The little one had the right idea, and appeared to be searching for the teat between another female’s front legs, looking to get his first drink of milk. He popped his own trunk into his mouth a few times and realised that wasn’t right, and finally Mike and his guests watched as the tiny newborn latched on to his mother and got the nourishment he needed. We are so privileged to be able to watch the first steps, the first breaths, and the first moments of an elephants life as it is born into the wild. The responsibility we have as visitors in the Kruger Park is enormous, and it is richly rewarded as we get to bear witness to these precious moments.