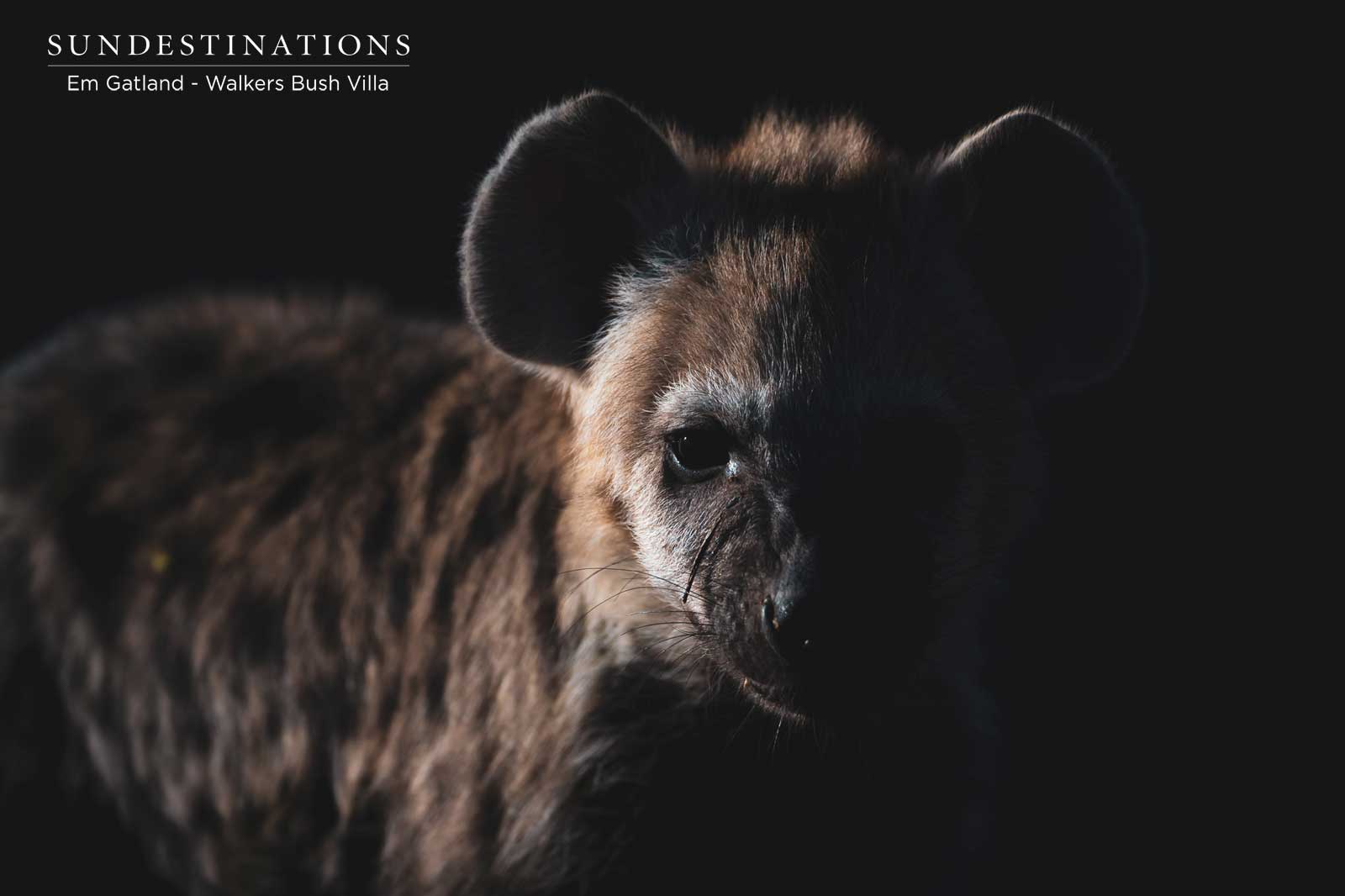 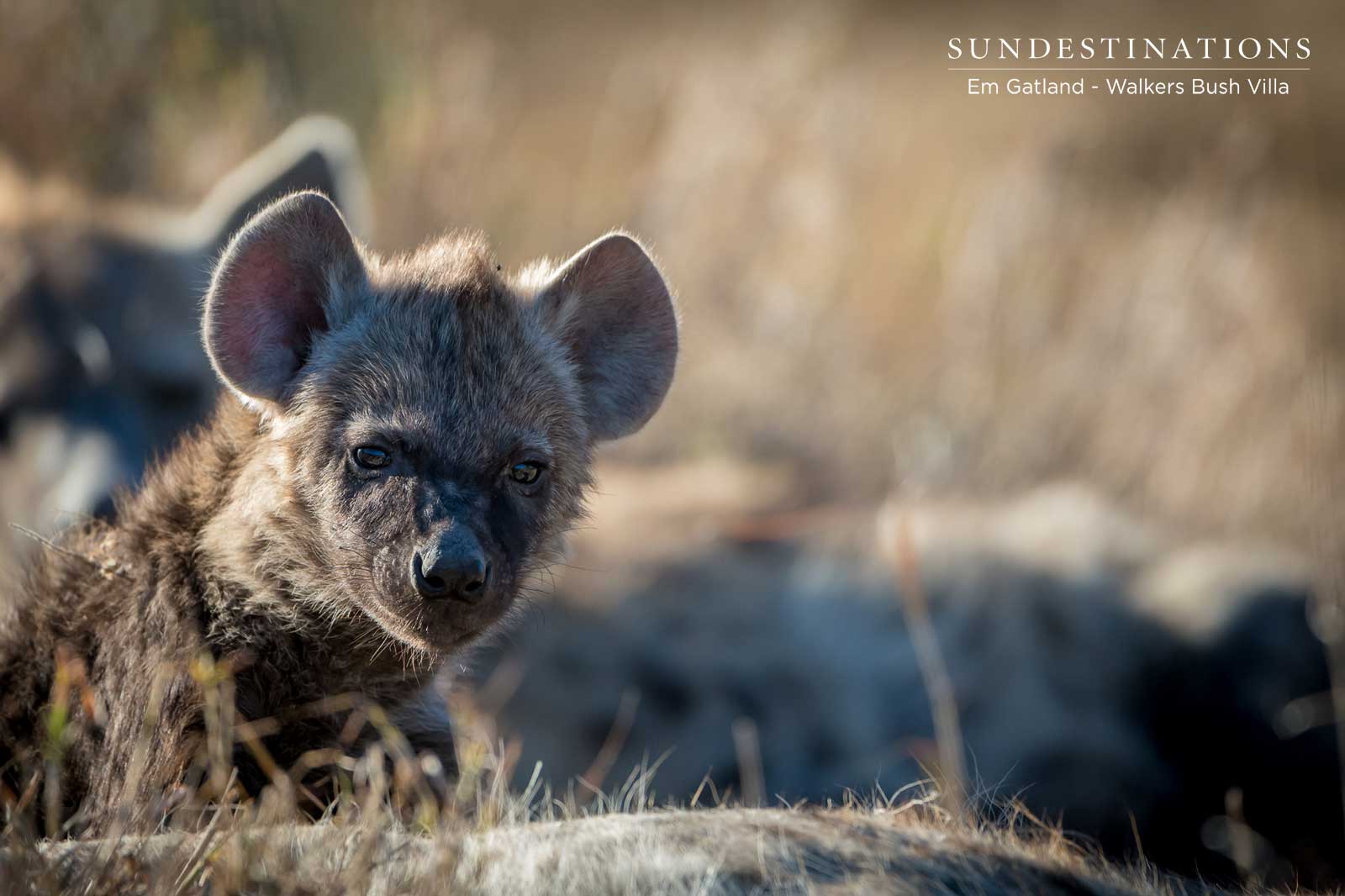 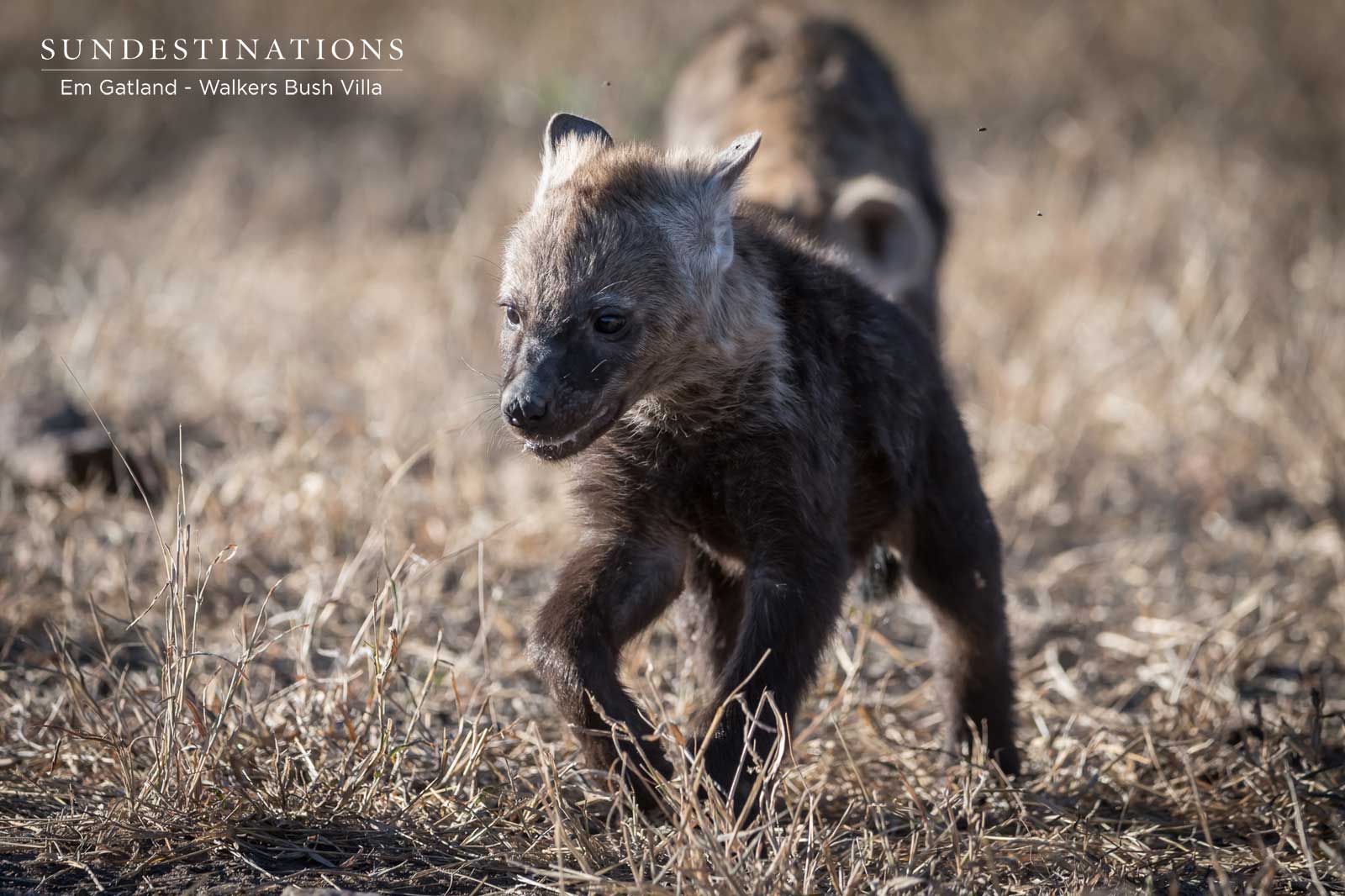 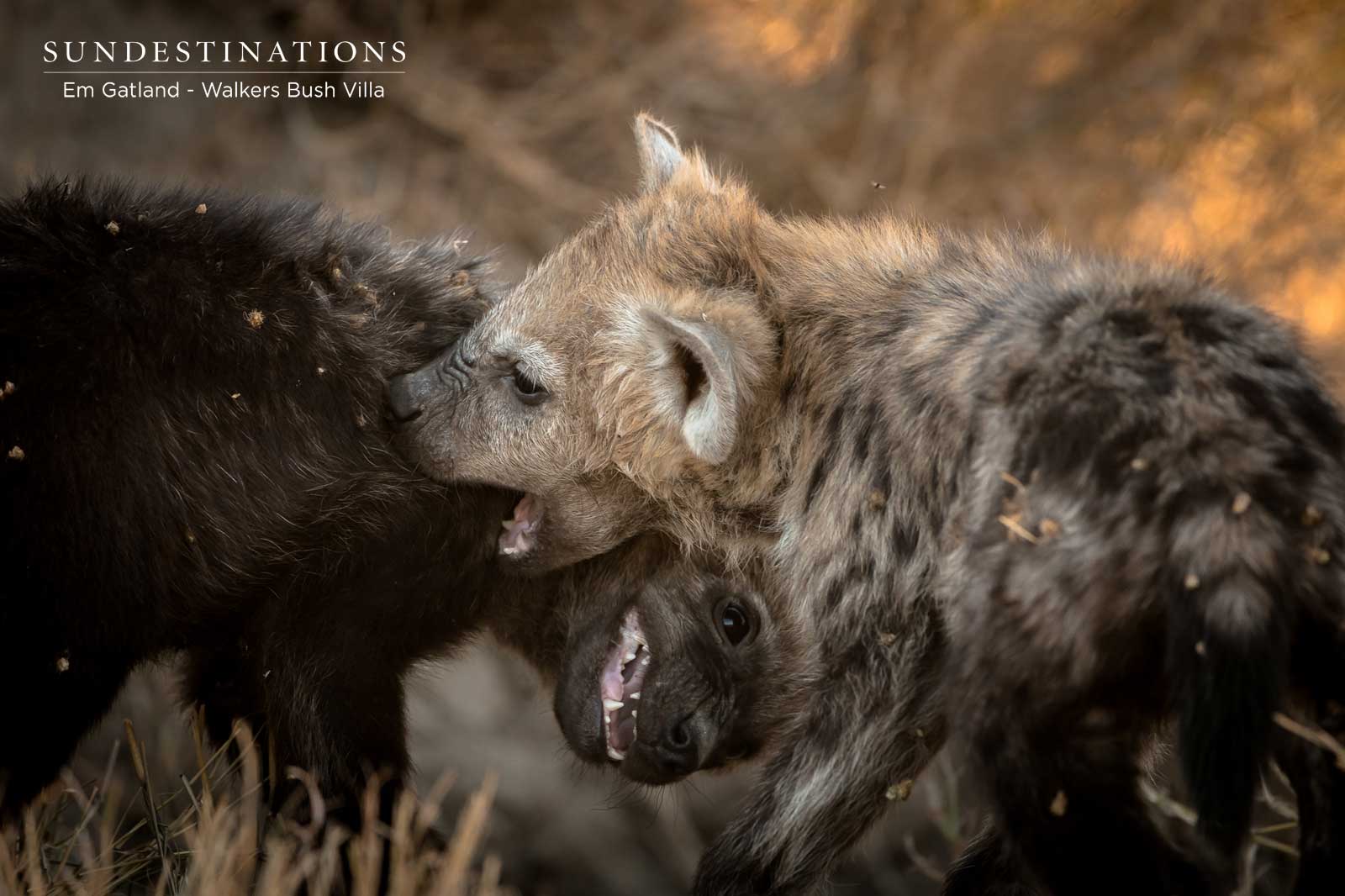 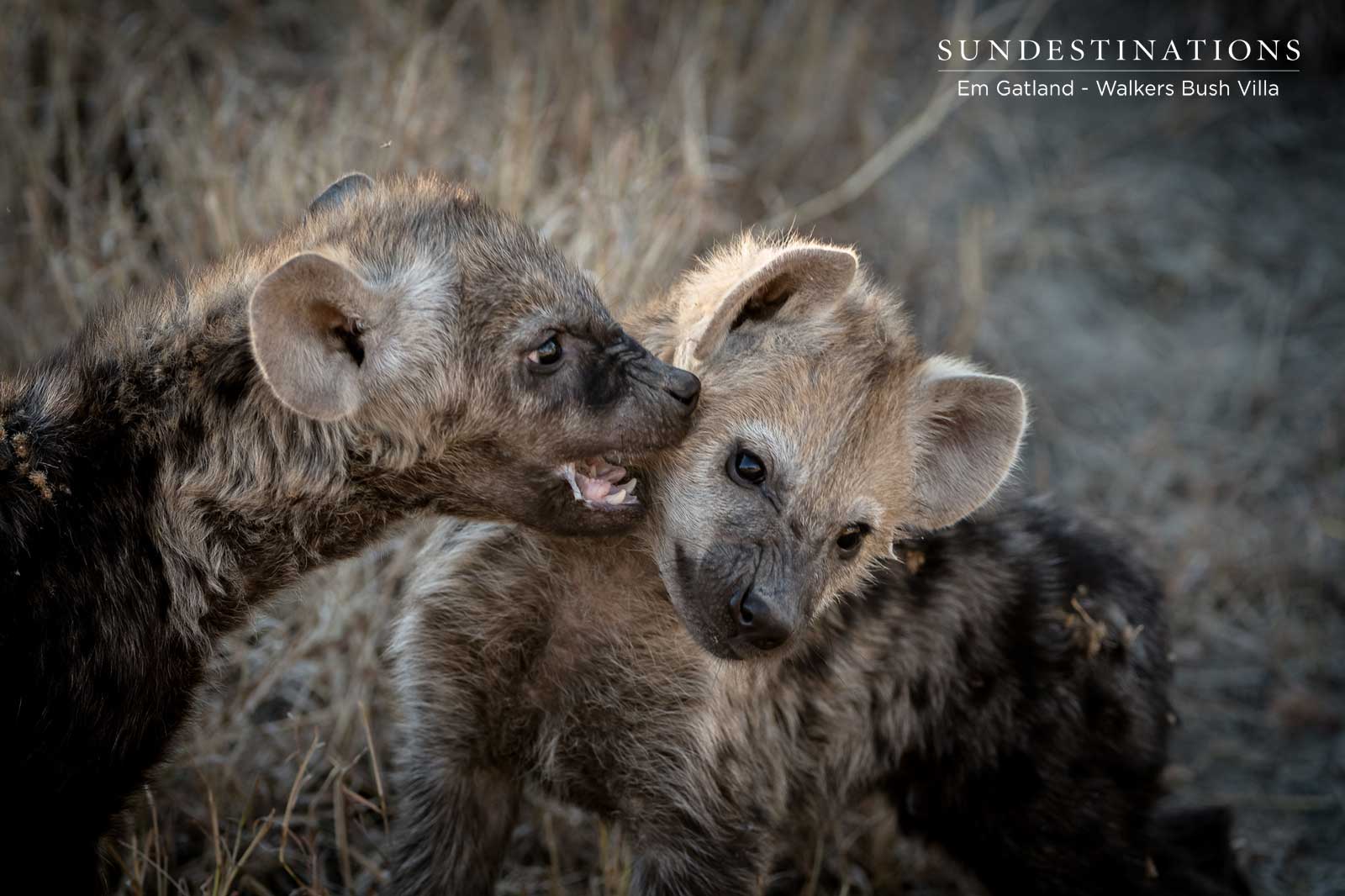 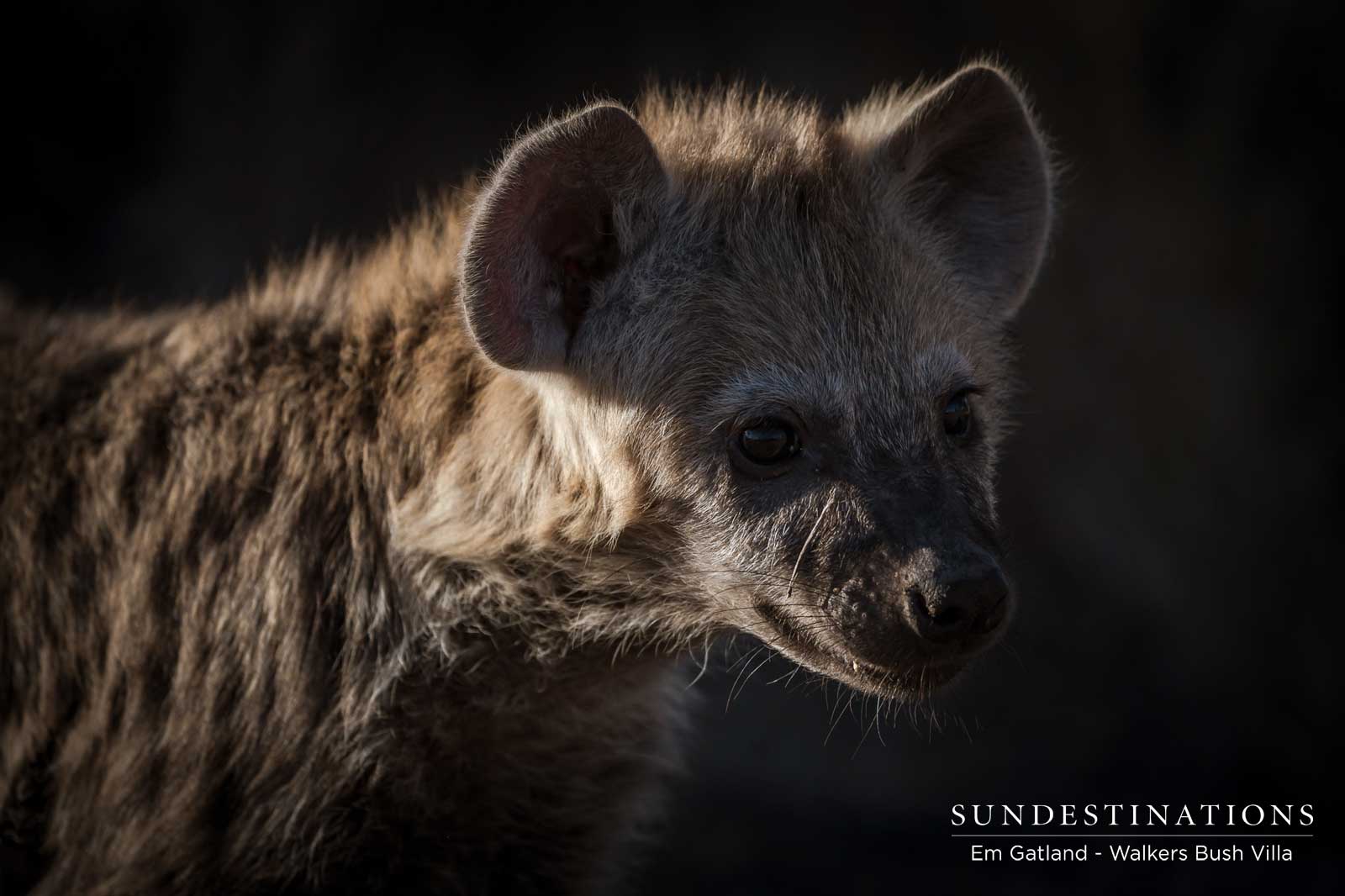 We’re here to dispel the myth that hyena are nothing but scavenging evil cretins. The team at Walkers Bush Villa recently enjoyed a sighting of adorable coarsely furred hyena cubs while on drive with leading guide, Brett. Em’s images prove that hyena can be pretty cute. 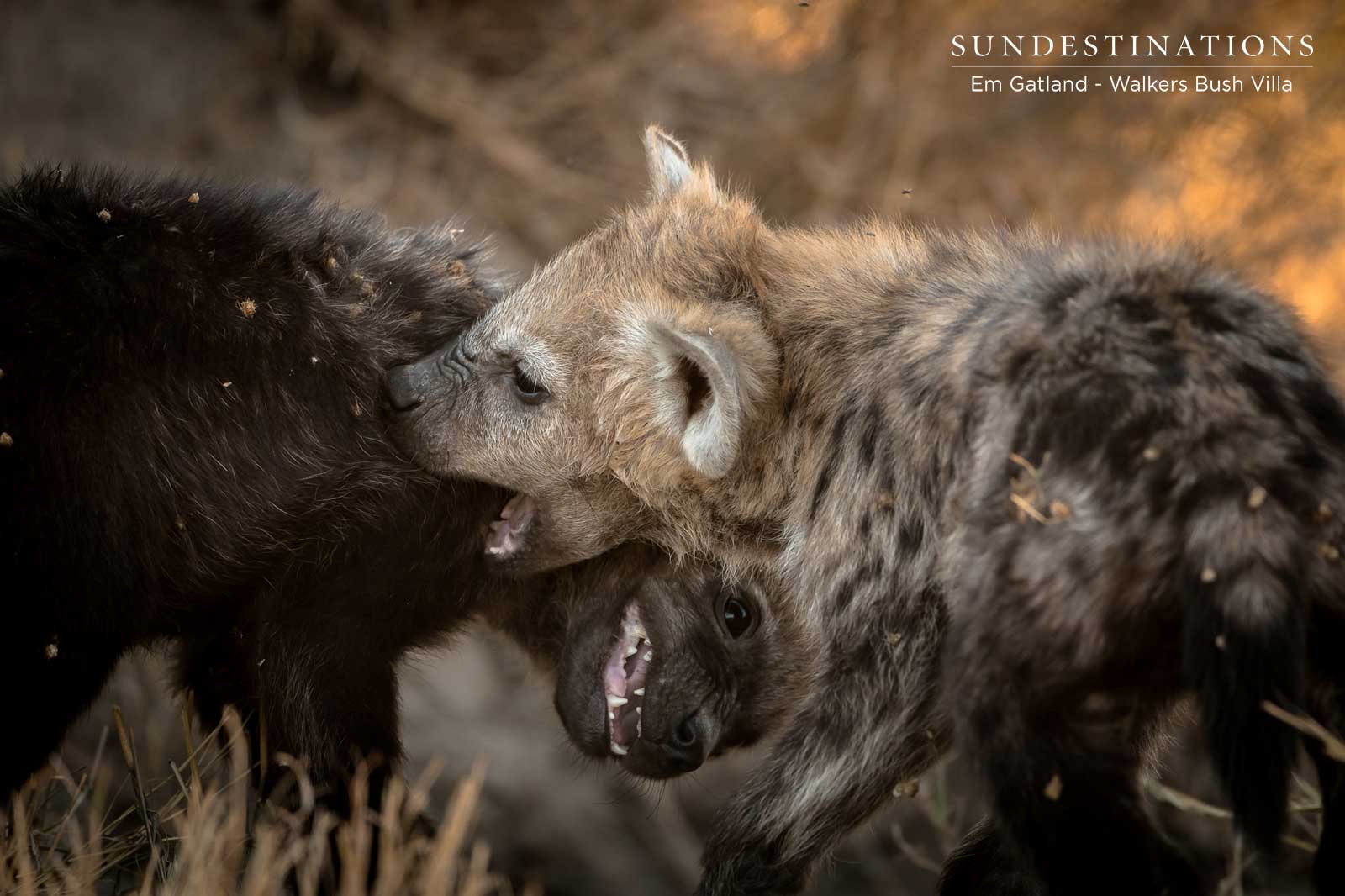 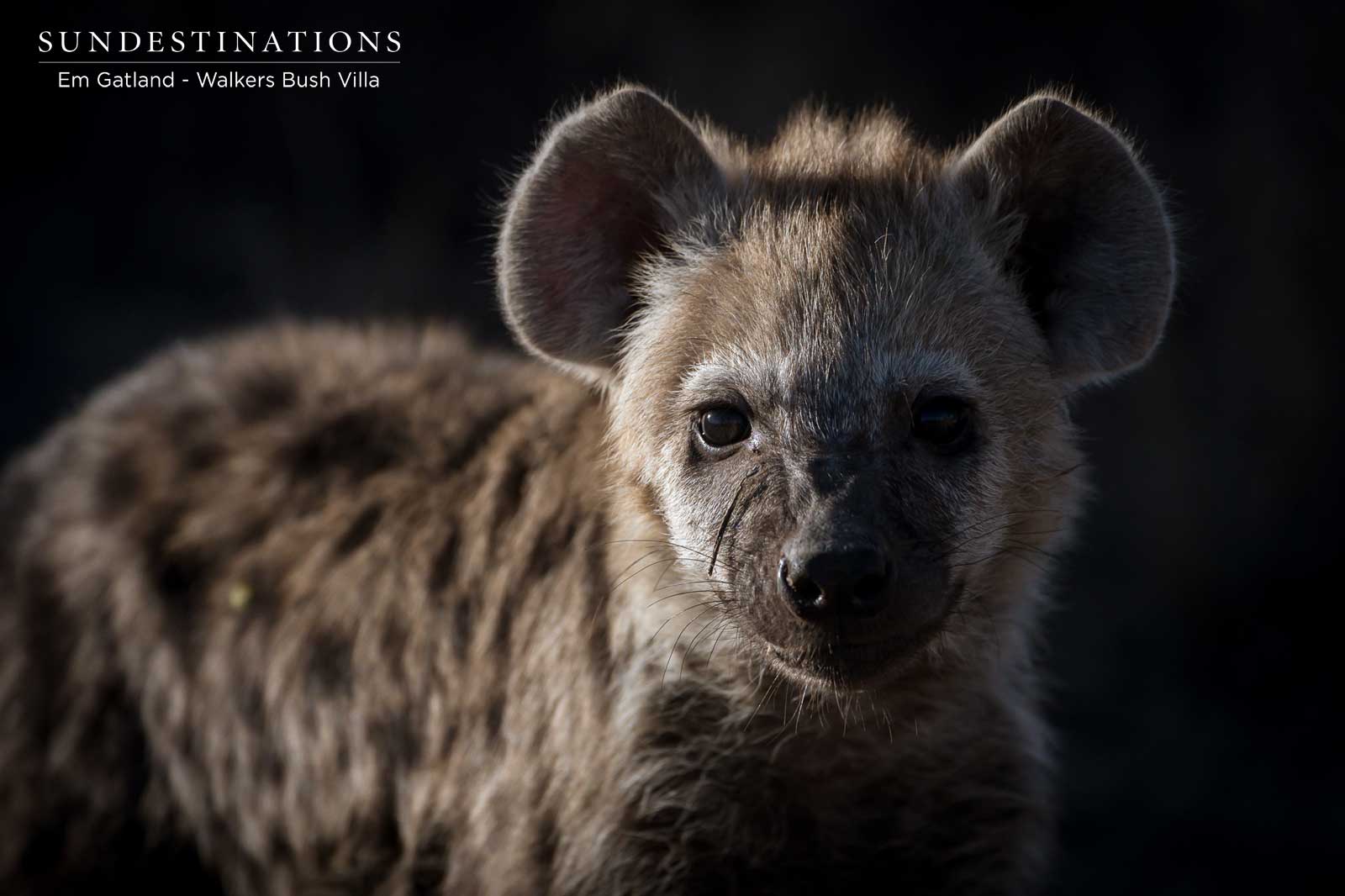 It goes without saying that hyena have a bad reputation in the wild. This is largely due to their unfortunate looks and sheepish gait, the misunderstanding of the hyena’s role in the bushveld, and their less than ethical means of gaining prey.

Did you know that hyenas have a crucial role to play in the wild? They clean up debris, decaying flesh and prevent the spread of possible disease. When the unmistakeable cries of a flaying animal echo through the savannah, the hyenas begin to vocalise,  and the clans eagerly approach the scene of a kill. These animals are opportunistic and will do what is necessary to find food, but they’re also accomplished hunters, which means they’re highly successful carnivores! We see hyena hovering around the base of trees while leopards dwell high above with their kill. They wait in the wings while beastly lions gorge on kills. These odd looking animals are experts at sourcing food.

So now we know about the vital role that hyena play in the cleanliness of a reserve, but it should be noted that hyena are more than just successful hunters and part of the ‘veld clean-up crew. Hyena have a softer side.  The entire clan – together with the dominant female – helps to rear the cubs. There is always full cooperation from clan members, including bringing food back to the den for consumption, and even protecting territories from intruders.  Hyena might have a tight-knit community, but interestingly enough, groups aren’t always made-up of related individuals. The structure within clans is quite complex, making them one of the most fascinating species in the wild.

Walkers Bush Villa is certainly no stranger to hyena sightings. With a prevalence of big cats in the area, it goes without saying that the spotted hyena is an ever present force within the reserve. Walkers enjoys plenty of hyena sightings, mostly of groups feasting on the remnants of a kill, making this cub sighting a welcome break from the “standard” hyena sightings. While Em and Rogan were on a game drive in the Timbavati with guide Brett, they came across hyena cubs. This made a nice break from seeing hyena fulfilling the stereotype of cackling, stealing and skulking in the shadows.

Em, Rogan and Brett watched the young cubs stumbling around and play fighting. The bitch births 1 – 3 cubs on average and her gestation period is a meagre 4 months. Cubs are born into a carefully selected birthing den, which can be anything from a disused termite mound to a well-hidden hole they’ve dug in the ground.

Brett, a highly-qualified and eager guide, knew just where to find the hyena. These growing cubs are born black and develop their spots at roughly 3 months of age, which would indicate that they are in the vicinity of that age, if not slightly older. This was yet another adorable sighting at Walkers Bush Villa.

The only negative side of hyena cubs? Unfortunately, cubs of the same sex often begin fighting – quite violently, and this can result in the death. We’re pretty sure you’ll love hyena after seeing these pictures! 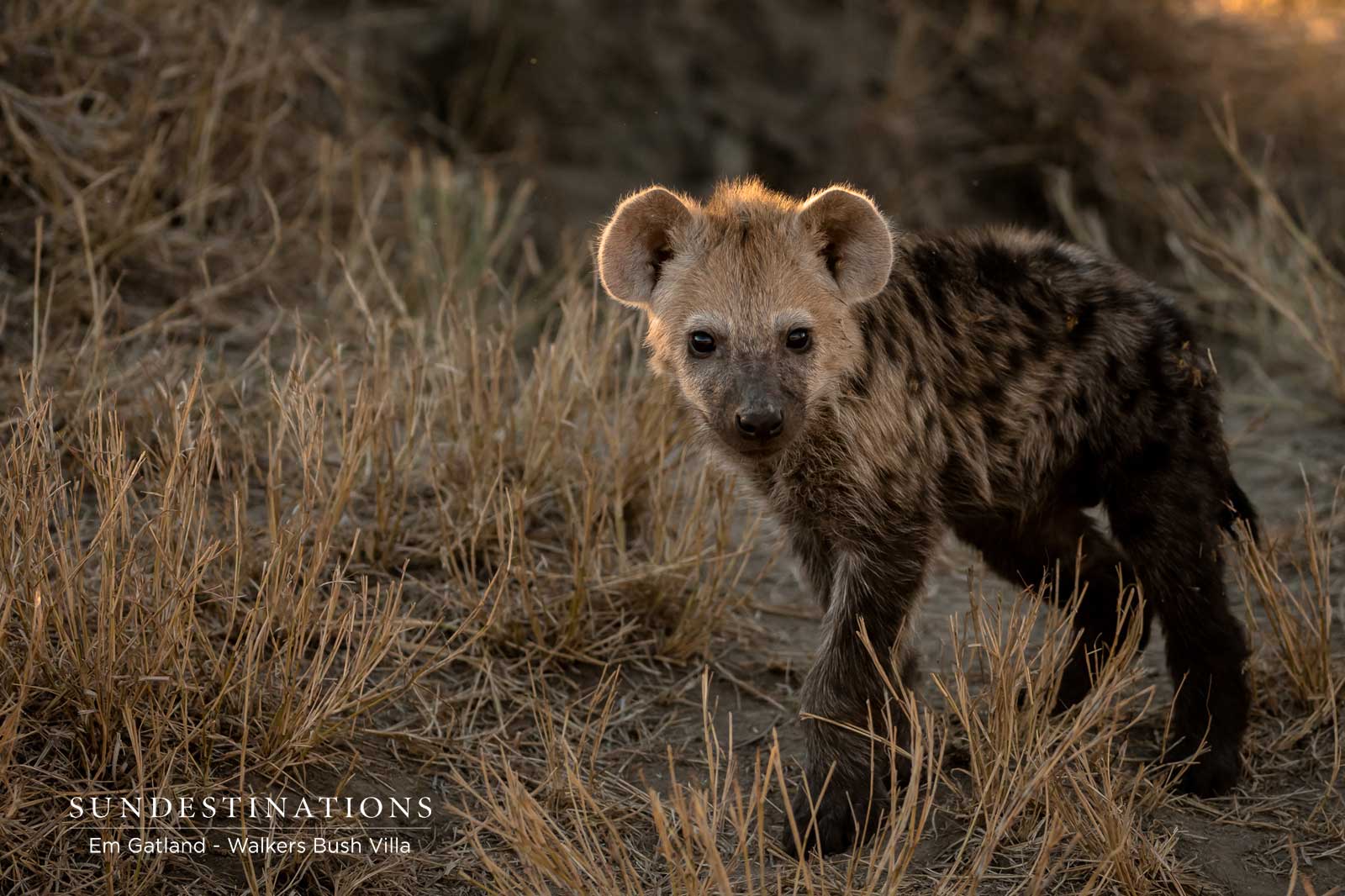 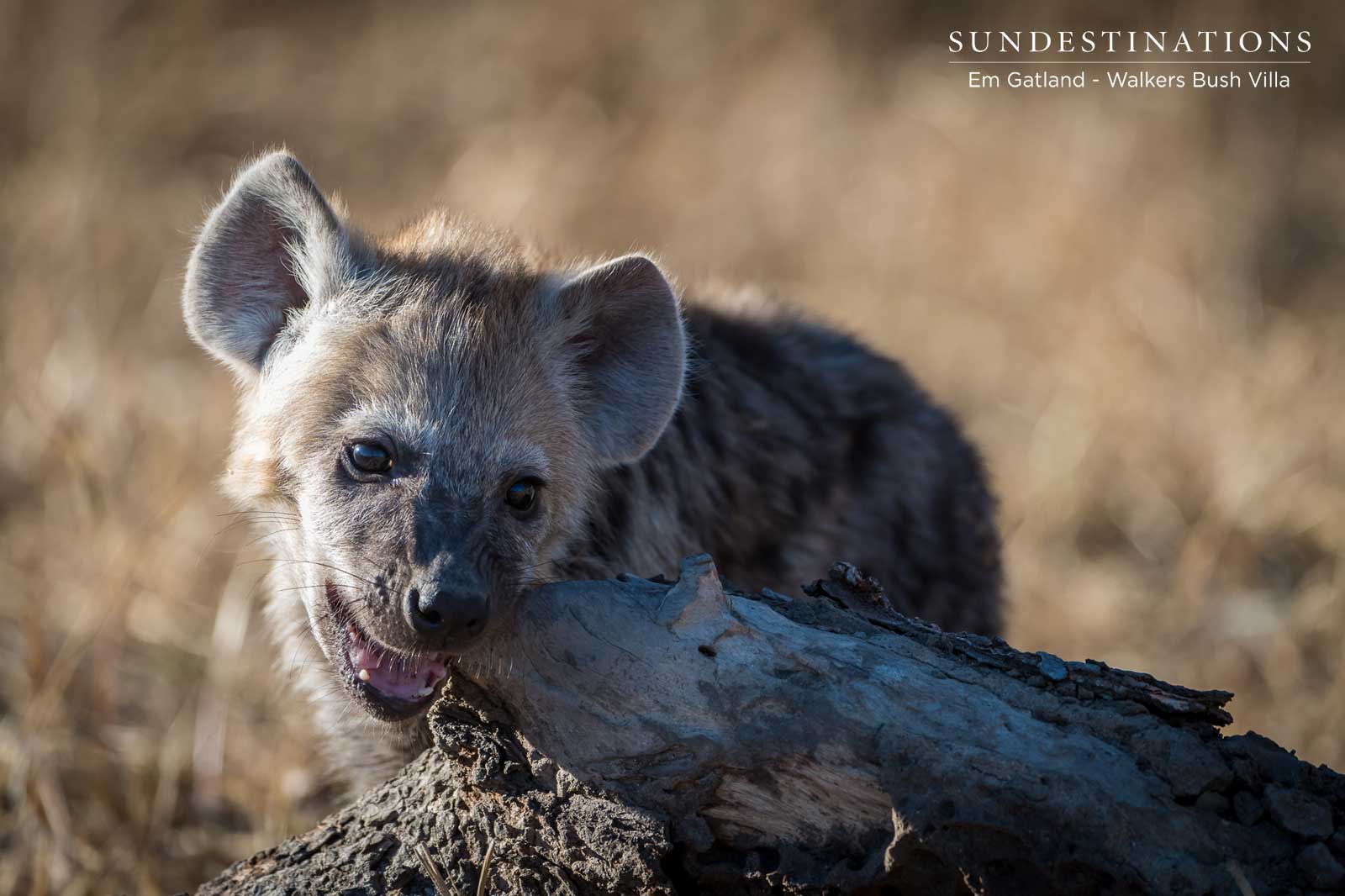 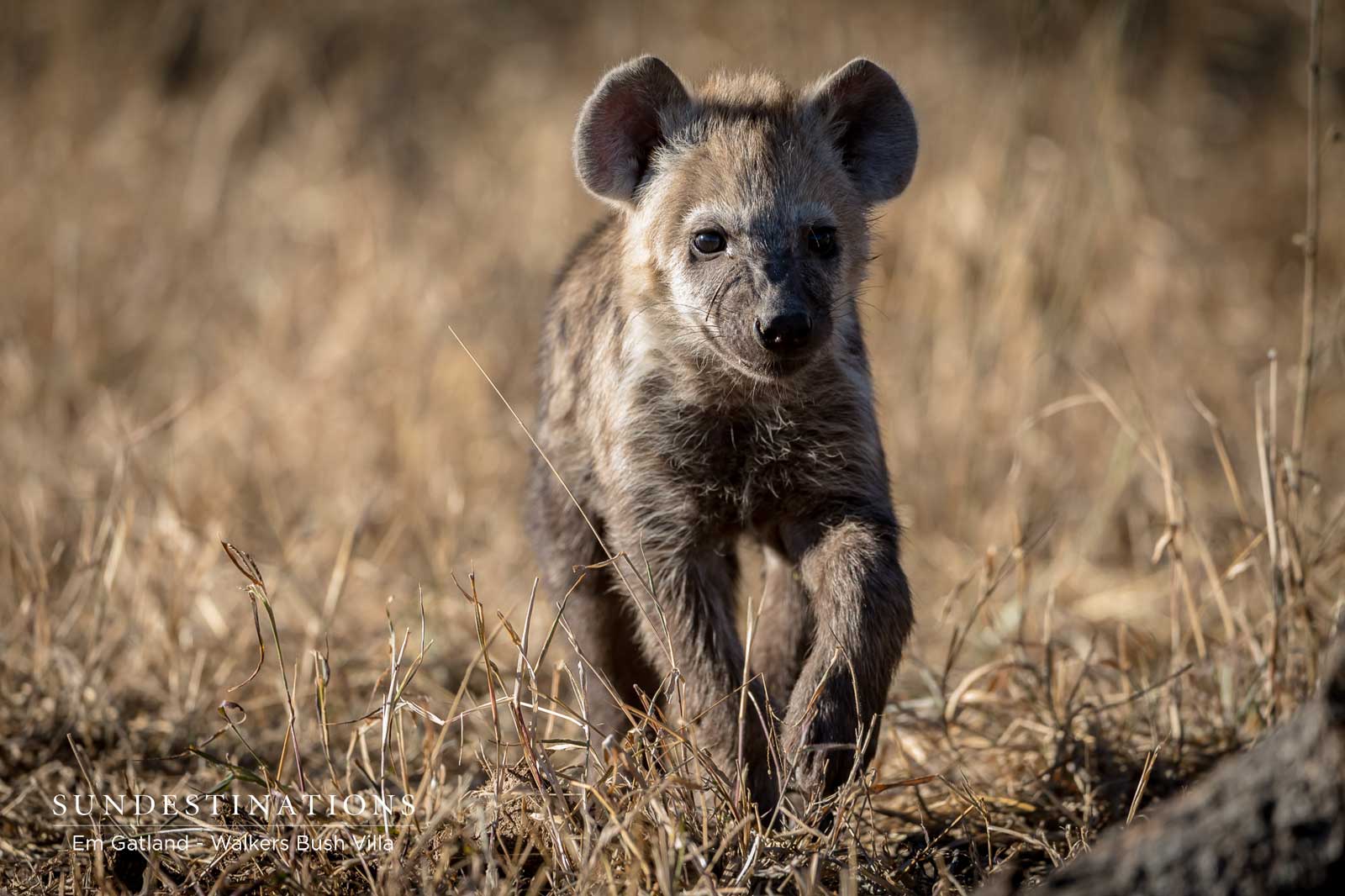