When Animals Walk Through the Klaserie Camps 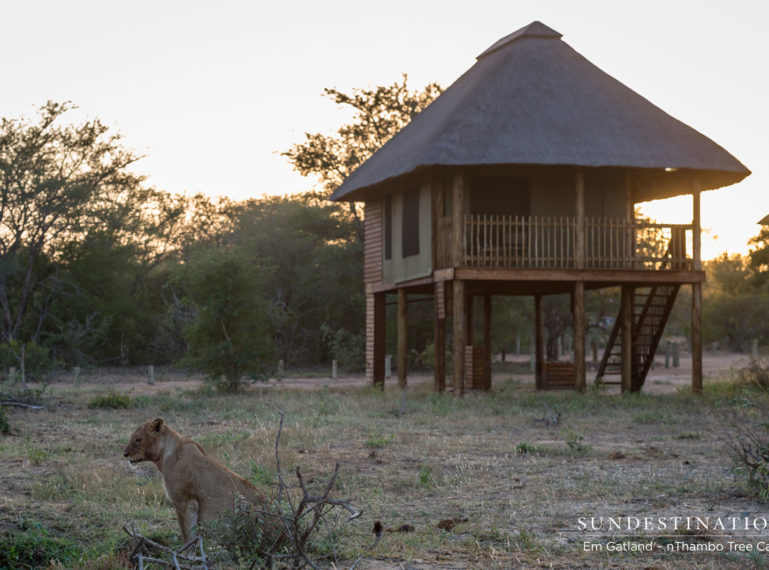 Isn’t it fantastic when you’re in the right place at the right time? Photographer Em Gatland was on assignment at Africa on Foot and nThambo Tree Camp when a lion pride took down a buffalo outside the wooden chalets at nThambo Tree Camp. The elephant herds, becoming somewhat jealous of the lions being in the spotlight, decided to enthral guests with an unusual sighting of them drinking at the splash pool at Africa on Foot.

Guests were about to embark on their evening game drive when they were treated to the elephant sighting. The Klaserie camps are no stranger to these kind of sightings and our photographer managed to capture the awe-inspiring moments on camera.

These are the highlights of staying in an unfenced camp – animals can roam freely throughout. The wooden chalets at nThambo Tree Camp are elevated wooden chalets resting on stilts. Guests often mention hyenas and other animal scuttling under their rooms.

Here’s a summary of what happened:

Elephants Drink from the Pool and Hang Around at Camp

The small splash pools at both nThambo Tree Camp and Africa on Foot provide a much needed source of easily accessible water, which our jumbo herds seem to love. Both camps are open, which makes the pools an easy target for thirsty elephants. Having a hardy digestive system, they’re not affected by any chemicals in the pool and actually only drink clean water.

Elephants eat for 12 – 18 hours a day, which means they digest plenty of vegetation on a daily basis. Because of this, they need to constantly replenish their thirst. When the landscape becomes arid and the droughts hit the desperate lands, elephants dig deep into the sand to access clean ground water. When they’re done with these small pits they create, the muddy holes are actually utilised by other animals. But if they’re close to camp, they’ll save themselves the effort and drink straight from the swimming pools.

When guests aren’t enjoying elephant sightings from the confines of camp, they’re indulging in close-up sightings of these jumbos while out on foot. The Ross Pride Breakaway lionesses took down a buffalo right in front of nThambo Tree Camp! The bond between these sisters is strong and they’re incredible hunters. Nomadic male, Mabande, has been making his presence known throughout the Klaserie Private Nature Reserve. He made a kill close to Jason’s Dam and the Ross girls approached the area in the hopes of sharing the kill. They were chased away and decided to make their own kill outside camp, giving guests a sighting of epic proportions.