Camp Savuti is a Rare Find in Botswana 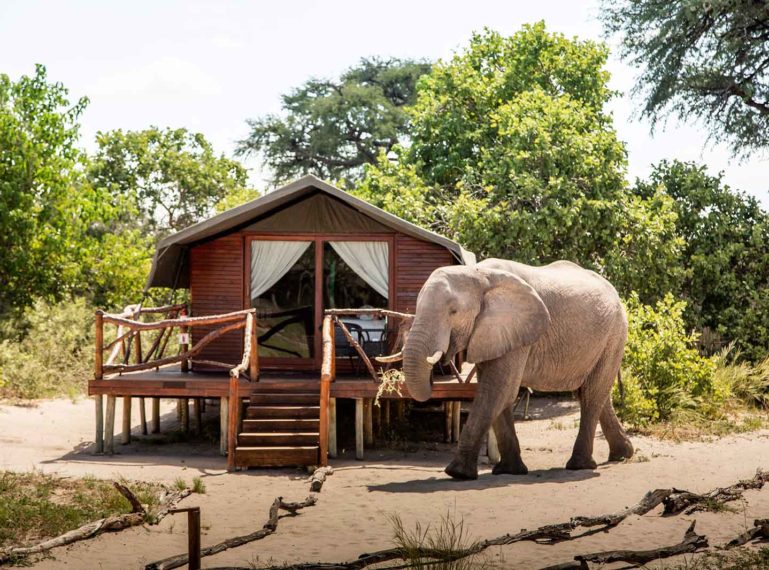 Tucked away in a pocket of game viewing paradise in the uncrowded Savuti sector of Chobe National Park, lies the authentic Camp Savuti. Renown for its sightings of big game and predators, in particular wild dog, lions and leopard, Camp Savuti is certainly a place  that deserves to be pinned onto your safari travel map. In an effort to reconnect with the Savuti region, we sent the talented Teagan Cunniffe on a trip to the intriguing Savuti region to uncover its wild treasures, and we weren’t disappointed with what both Teagan and the Savuti delivered! Camp Savuti in Botswana really is a rare find.

Larger than life elephants came bumbling past her rustic hideaway of a room, the famous ferocious and indomitable lion prides of the Savuti were seen while out on game drive, and there was prolific birdlife mixed in with a wealth of other sightings.

Teagan says, “my favourite thing about Camp Savuti was the wildlife that came into camp. Animals came right up to tents! The cat experience was also really enjoyable, and we managed to see lions and cheetah. The cats have known territories, so there’s a high chance of seeing cats. The terrain became familiar after a while, which is always comforting”

We’re not surprised at the prolific sightings enjoyed by Teagan. After all, the Savuti is a unique section of the Chobe National Park with a fascinating geography that has led to the region becoming a significant area for game viewing. The Chobe National Park itself has the highest concentration of species of all time, and is actually the third largest park in Botswana. The Savuti area makes up one of the 4 biologically diverse sectors of the park, and is an area of great mystery that has attracted filmmakers for many years. National Geographic filmed “Savage Kingdom” here, and Beverly and Dereck Joubert wrote “Hunting with the Moon : The Lions of Savuti”.

Why does the Savuti channel and Savute Marsh prompt such interest from wildlife enthusiasts? Because it is the home of lions that hunt elephants (the notorious Marsh Pride), and it’s also a region where predators have had to adapt and survive because of unpredictable tectonic plate movements disrupting the flow of the Savuti channel. Let’s unpack this a bit…

The Savute Marsh, an area covering 10,878 km2 in its entirety, had its natural water supply cut due to tectonic plate movement. It’s main water now comes from the erratic Savuti channel which drains from the Linyanti swamps. This is also affected by tectonic movements, and the last time the channel flowed was from 2010 – 2014. Prior to 2010 the channel was dried for almost 28 years.

The Savuti channel dries up for decades and then erratically begins to flow again. At the moment the channel and marsh are completely dry, with the only supply of water coming from the seasonal rains. Savute Marsh is basically now a relic of a large inland lake. When the Savute Marsh dried up decades ago, animal patterns were forced to changed. No longer did lions have abundant herds if antelope to feast on, the herbivores could not survive the lack of greenery. Lions adapted and become fascinating killers, taking down elephants when they could.

Now you know why Teagan was so eager to visit an area that has great importance in many books and documentaries. An opportunity to immerse herself in one of the “greats” of Chobe.

Surrounded by savannah and grasslands, means that Camp Savuti is home to dynamic wildlife. There’s no denying that game drives and bush walks always lead to some kind of spectacular sighting. And when not in hot pursuit of predators, Life at camp offers up absolute tranquility in a peaceful setting.

Camp Savuti is a simple, affordable option within the Chobe National Park, and offers accommodation in 5 individual Meru-style tents built on raised wooden platforms. Each tent has sweeping views of the wild, and comes with its own quaint balcony. Nothing better than relaxing on an elevated area that gives rise to unique vantage points of the wilderness beyond. The bathroom is separated from the main bedroom interior by a dividing canvas curtain that can be fastened back or pulled closed for privacy. There is also a flush toilet and indoor bath. Each unit is such a perfect safari hideaway!

Camp Savuti really is a rare find in Botswana. 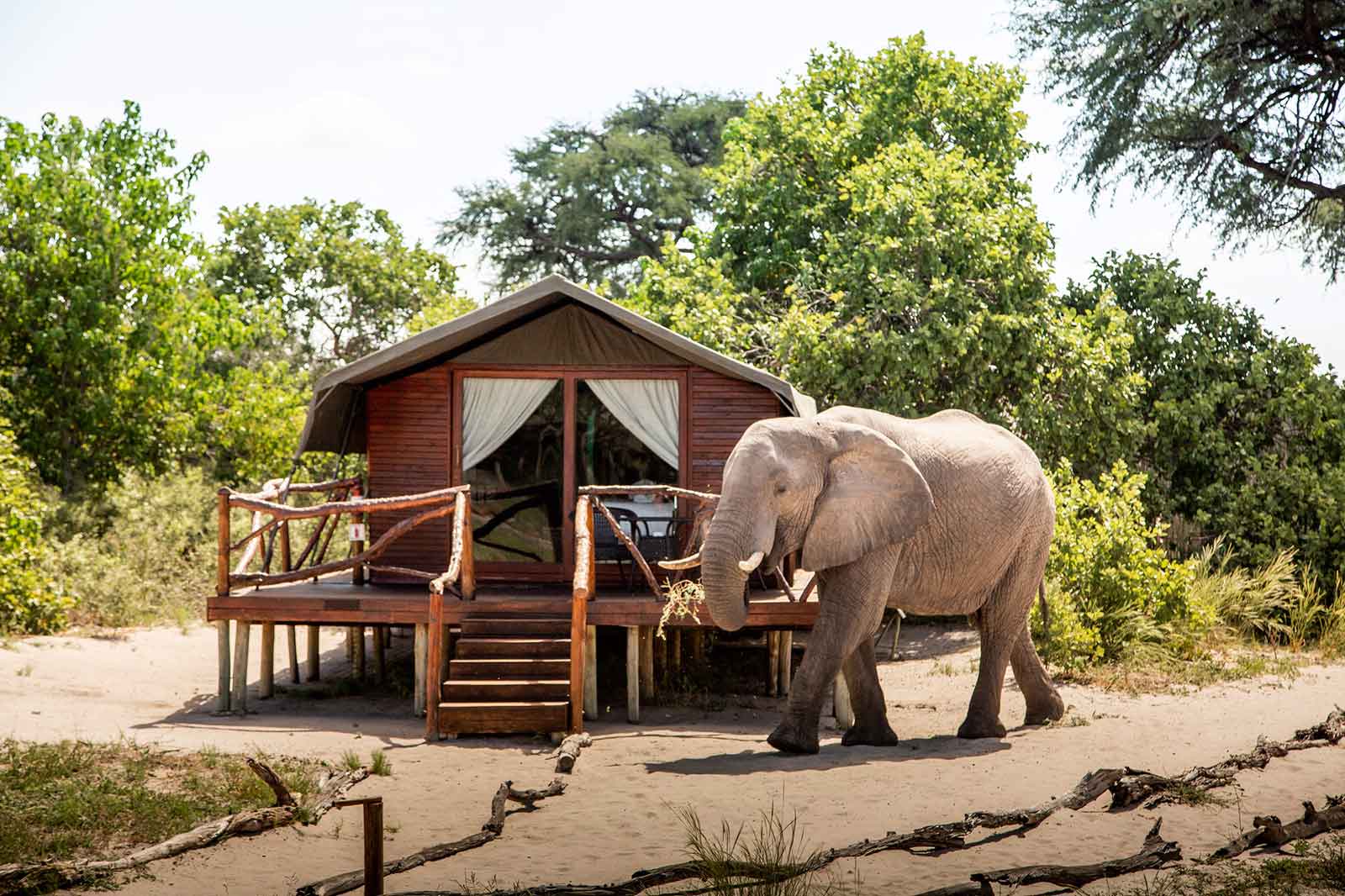 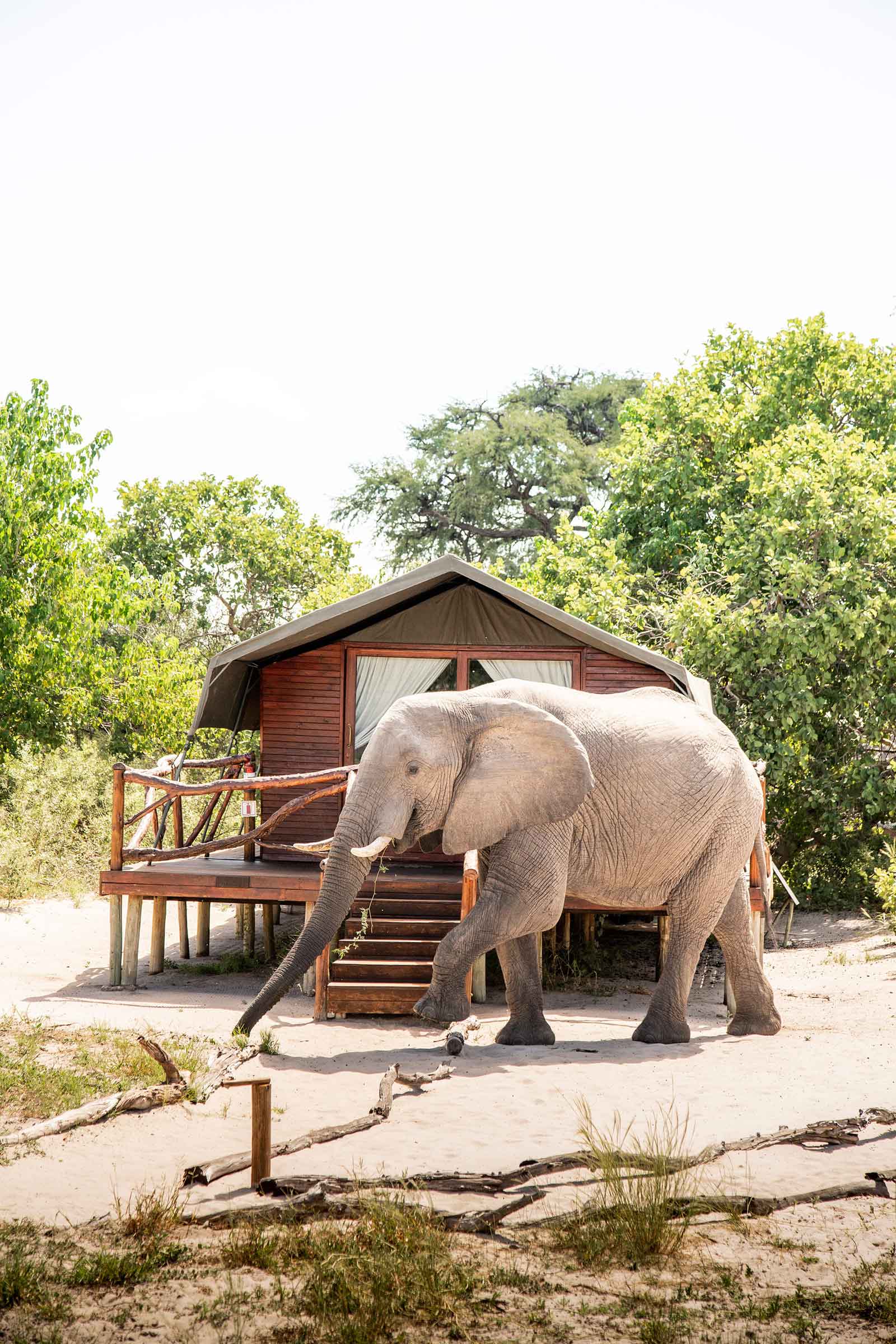 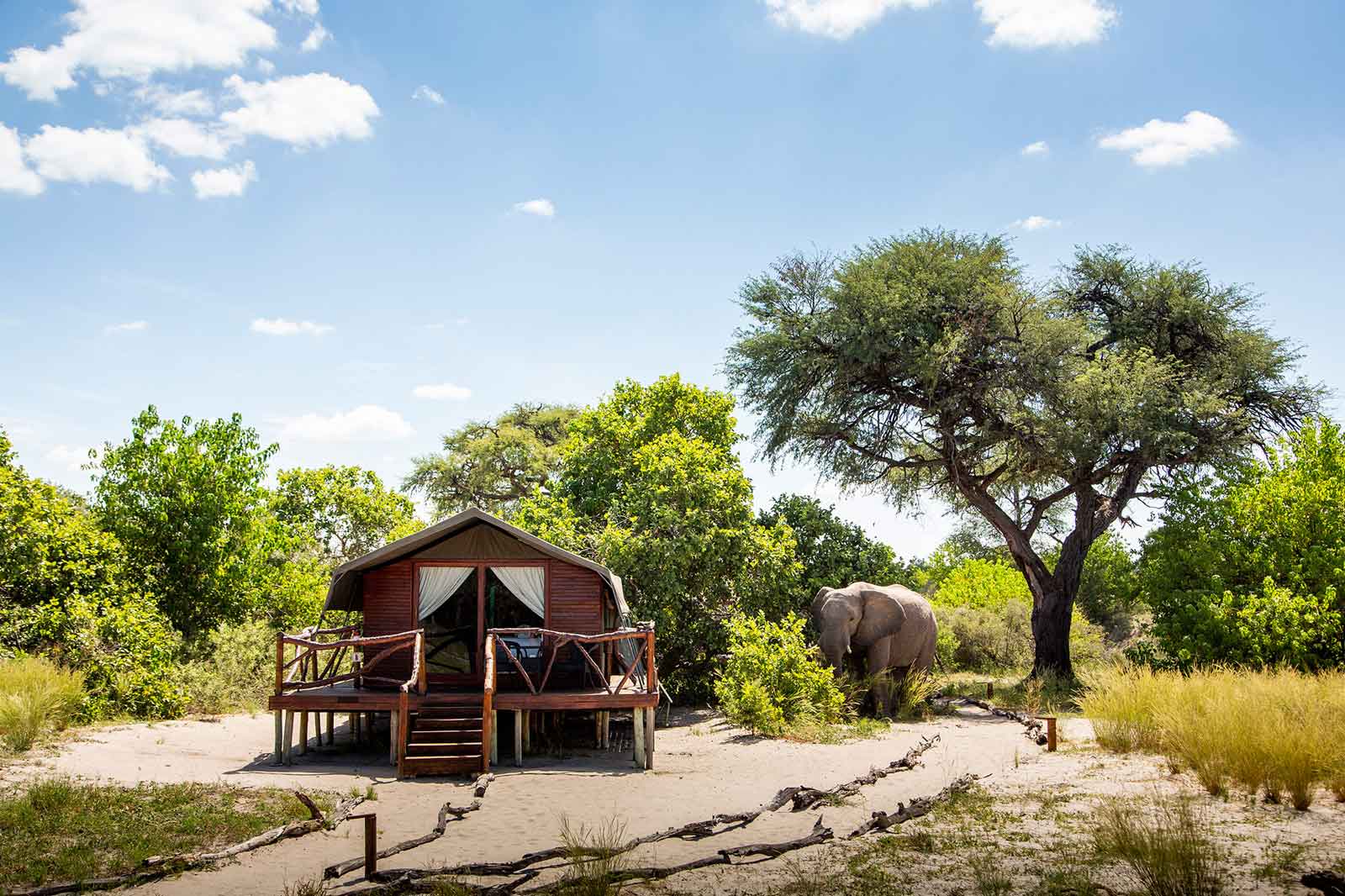 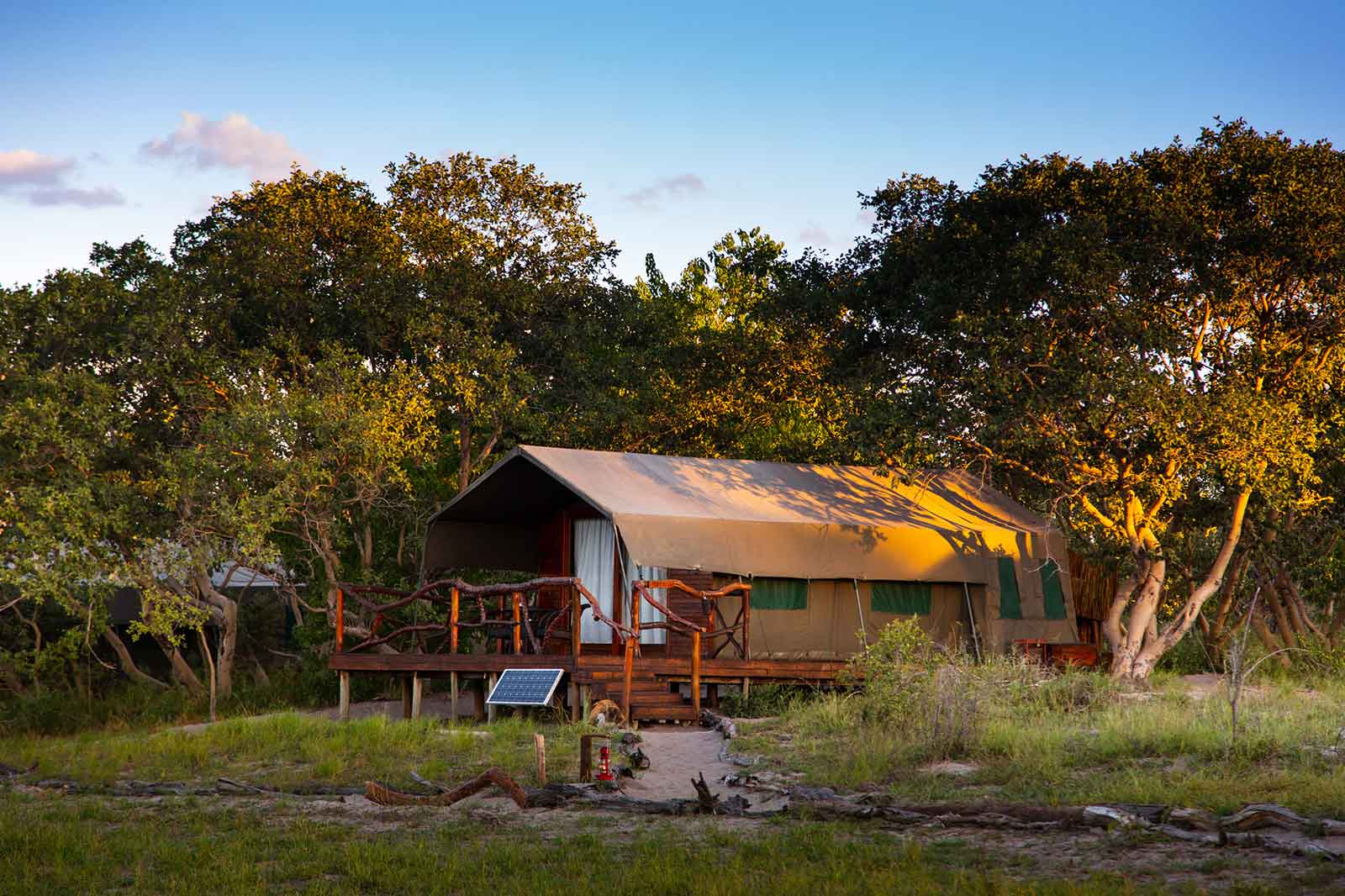 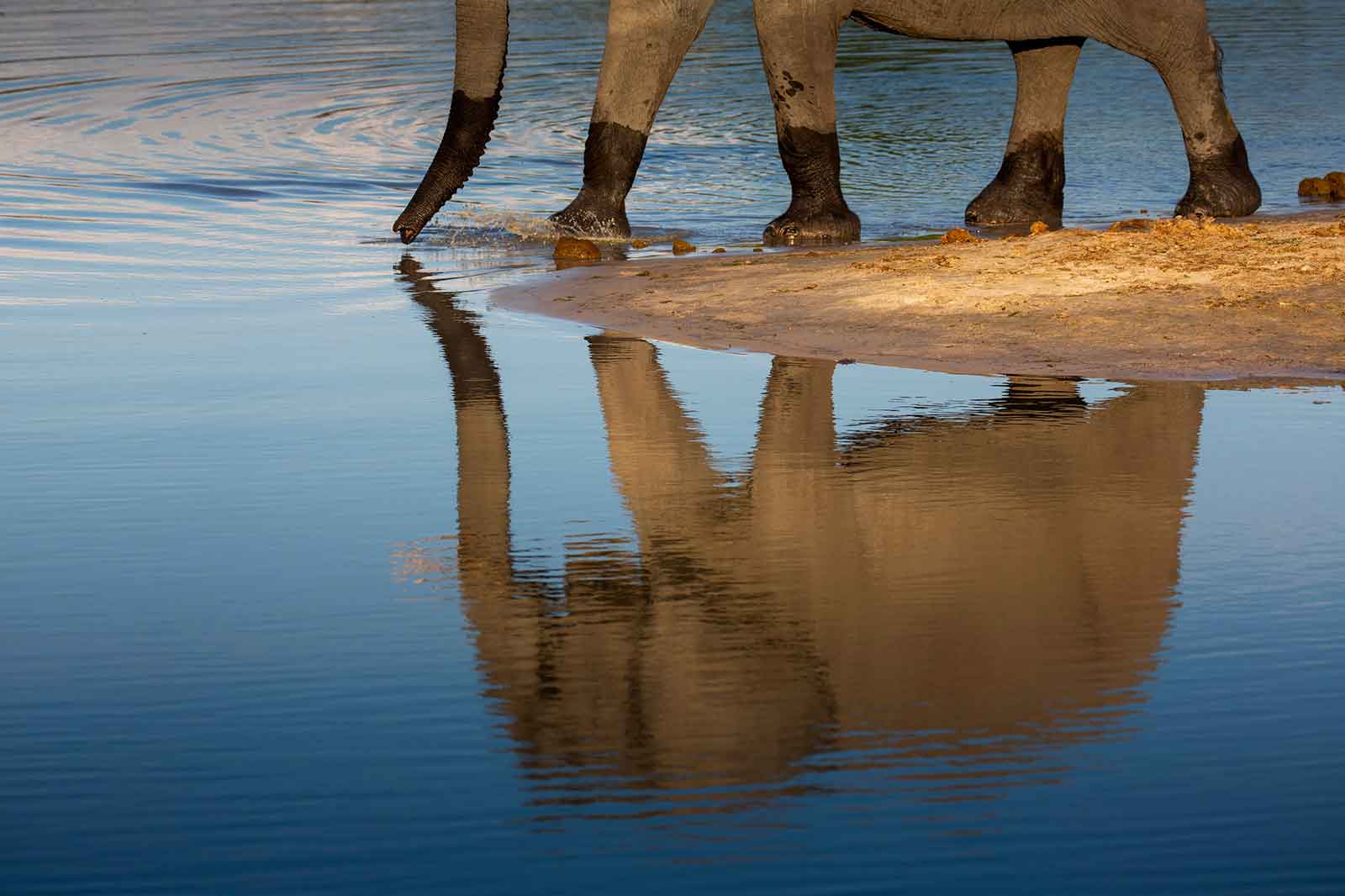 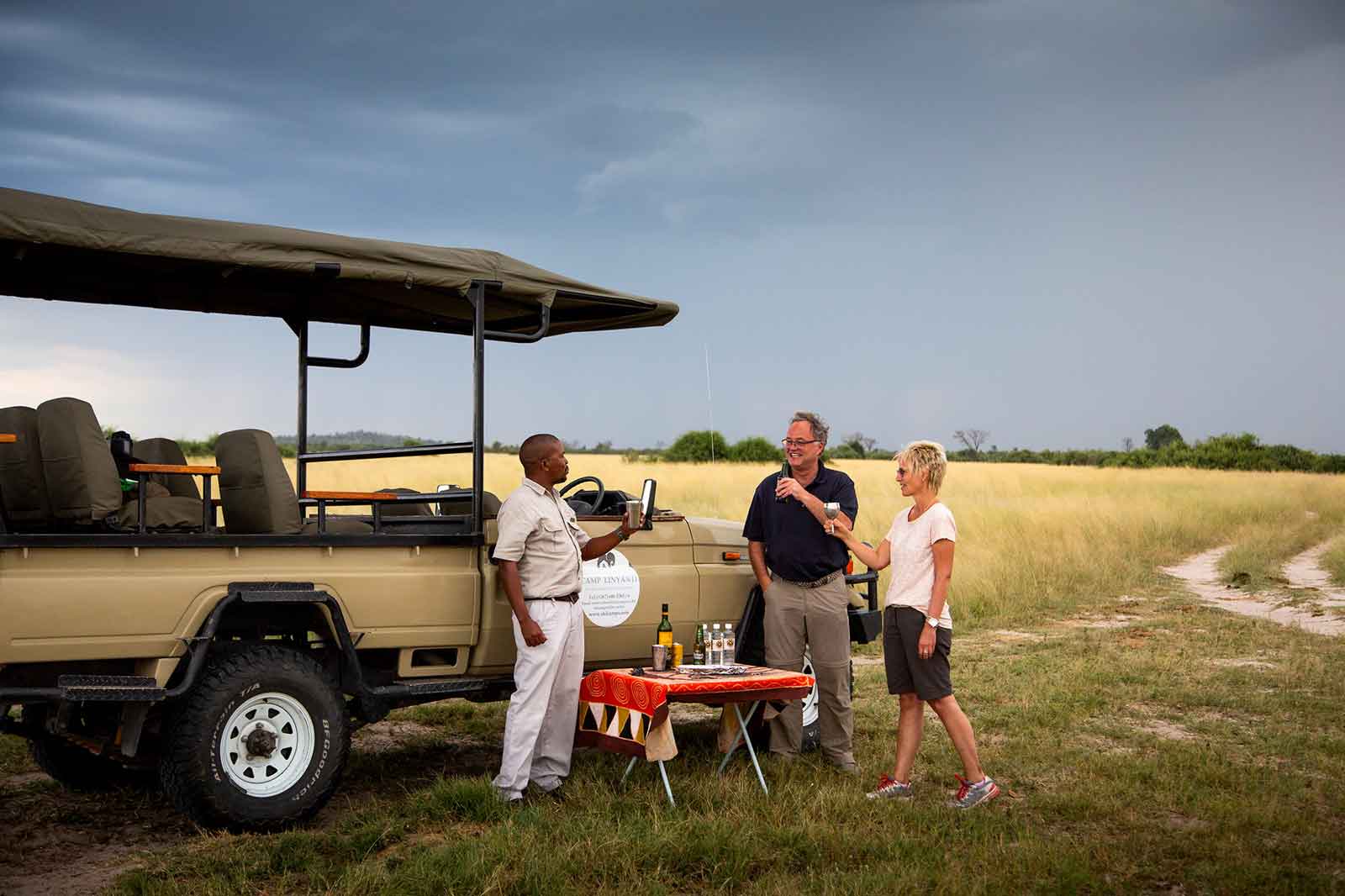 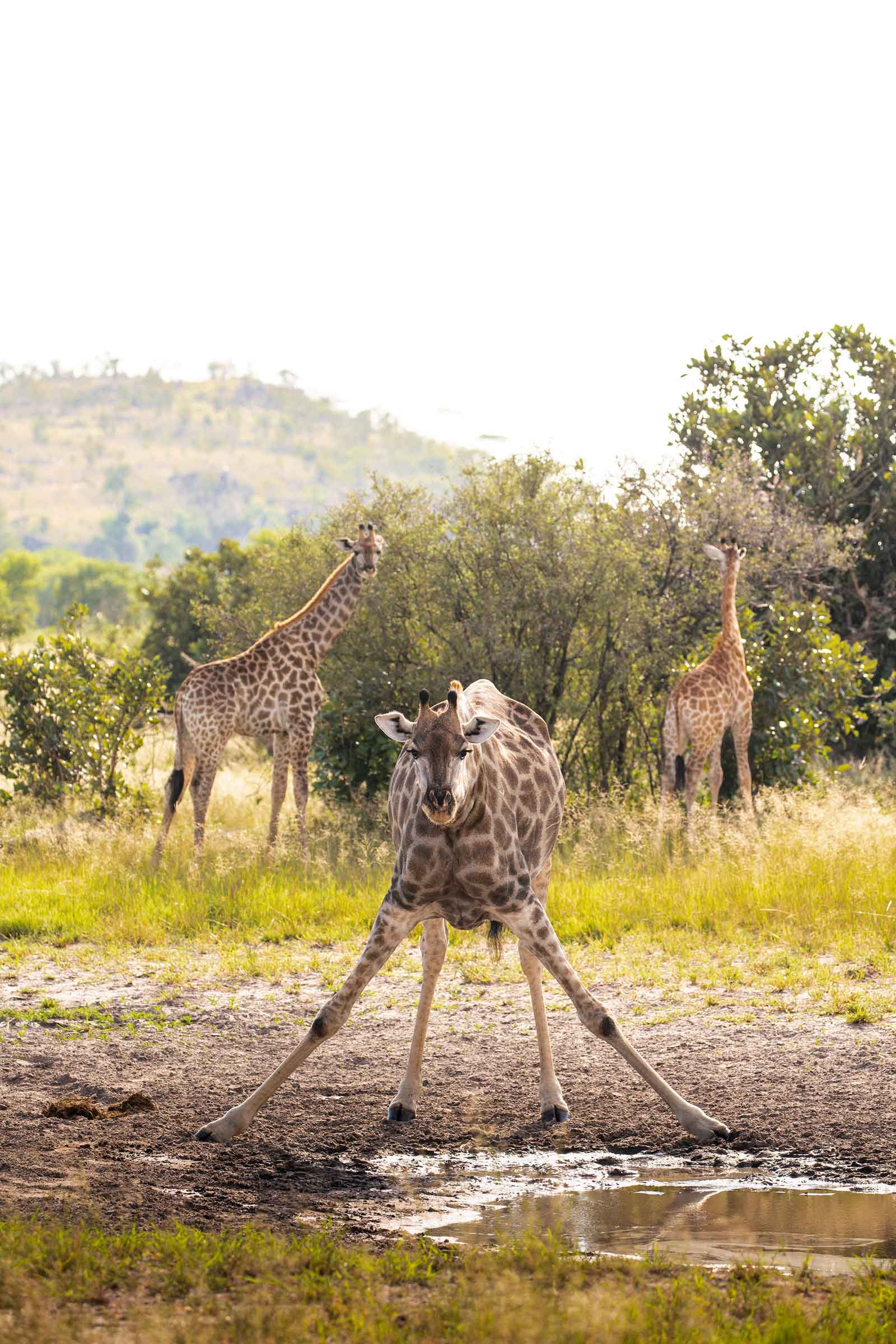 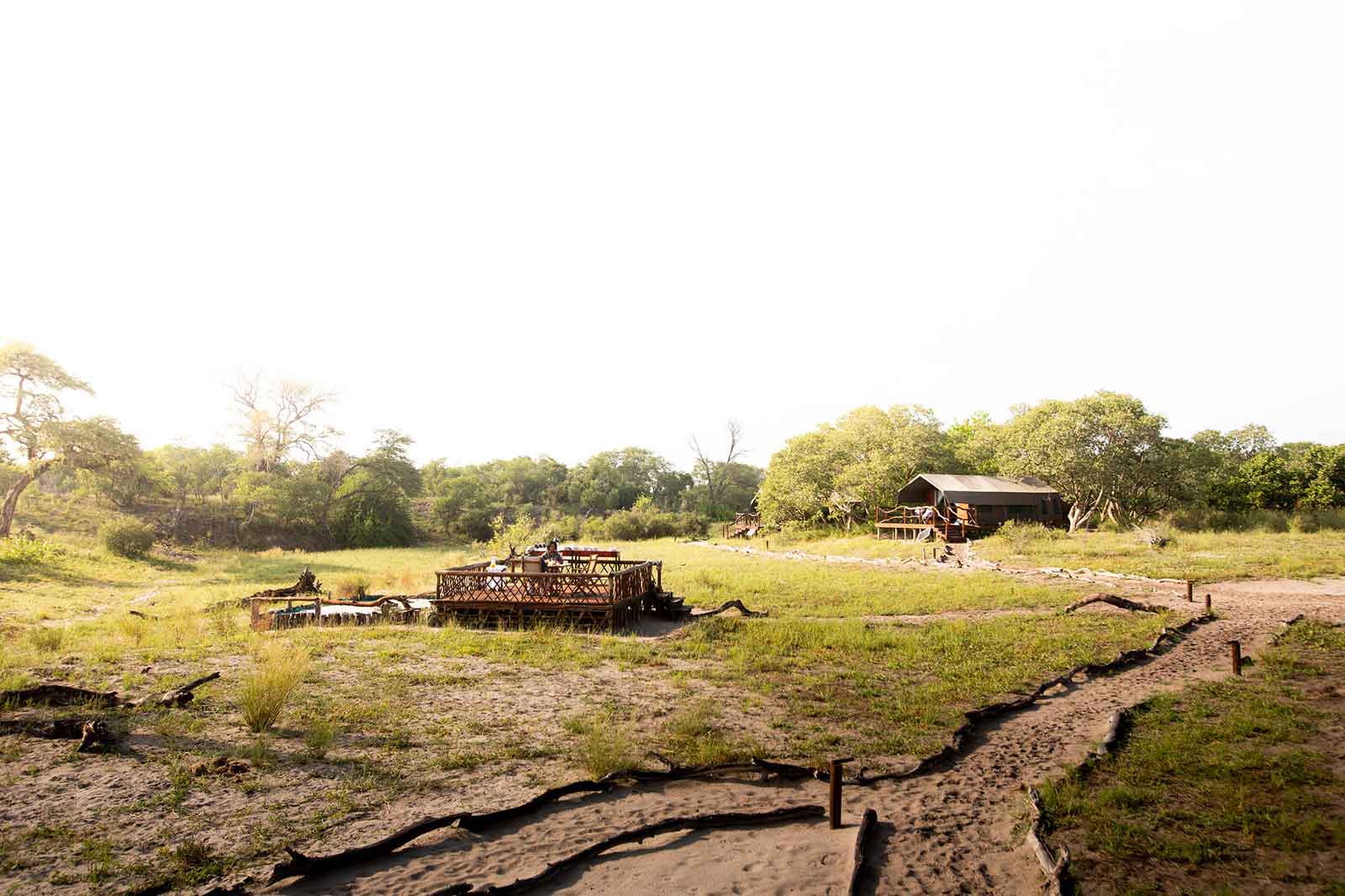 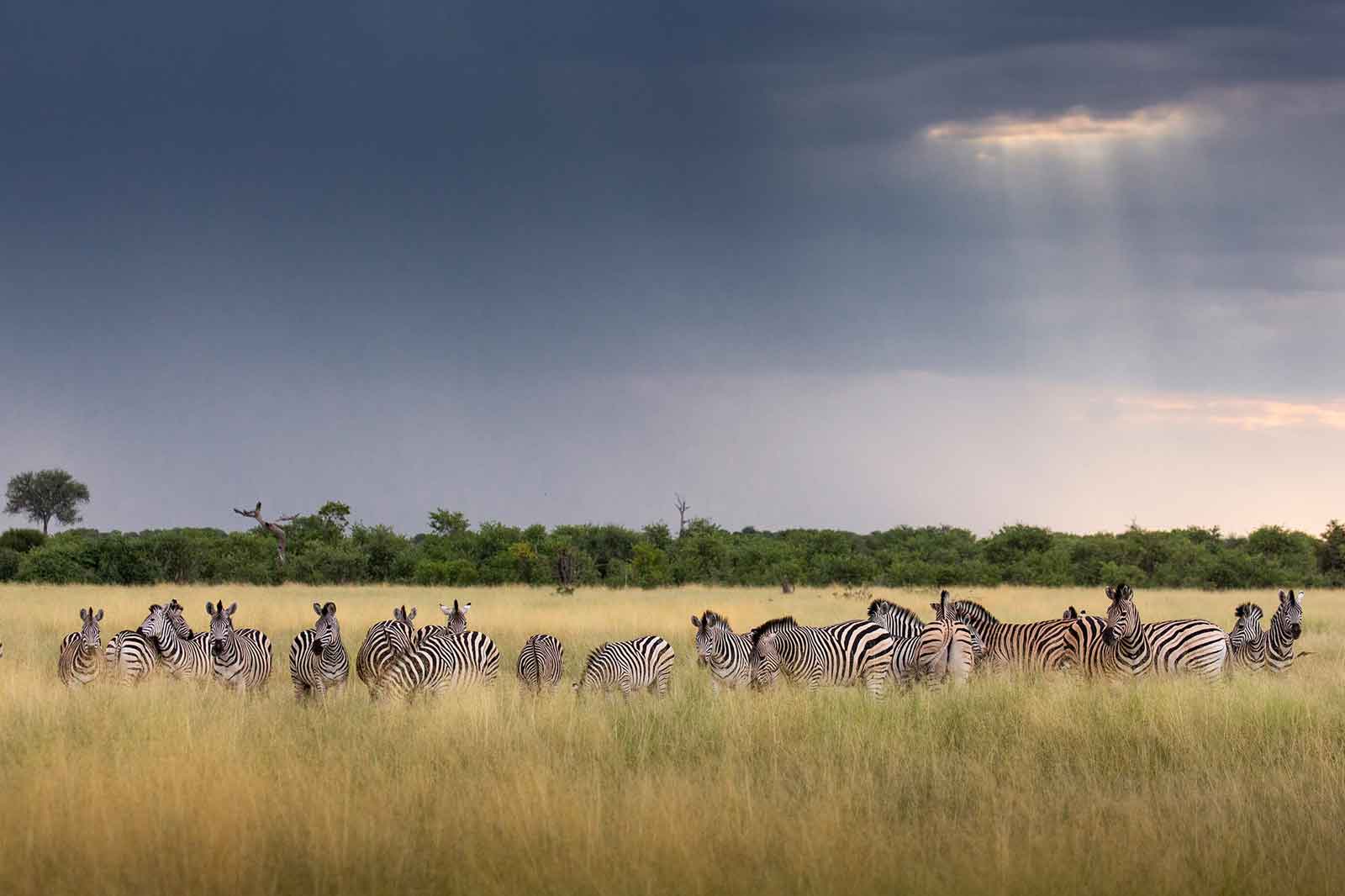 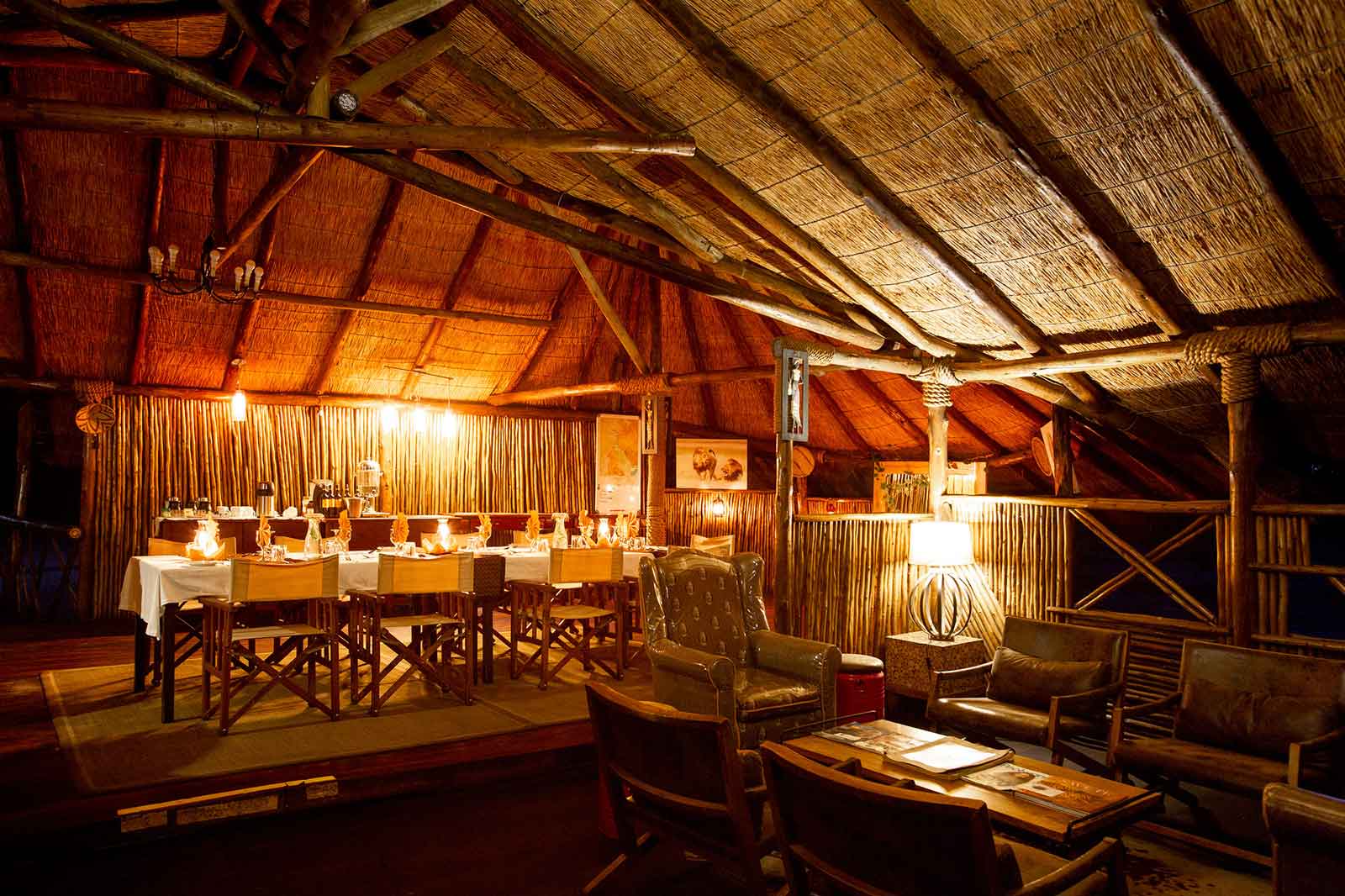 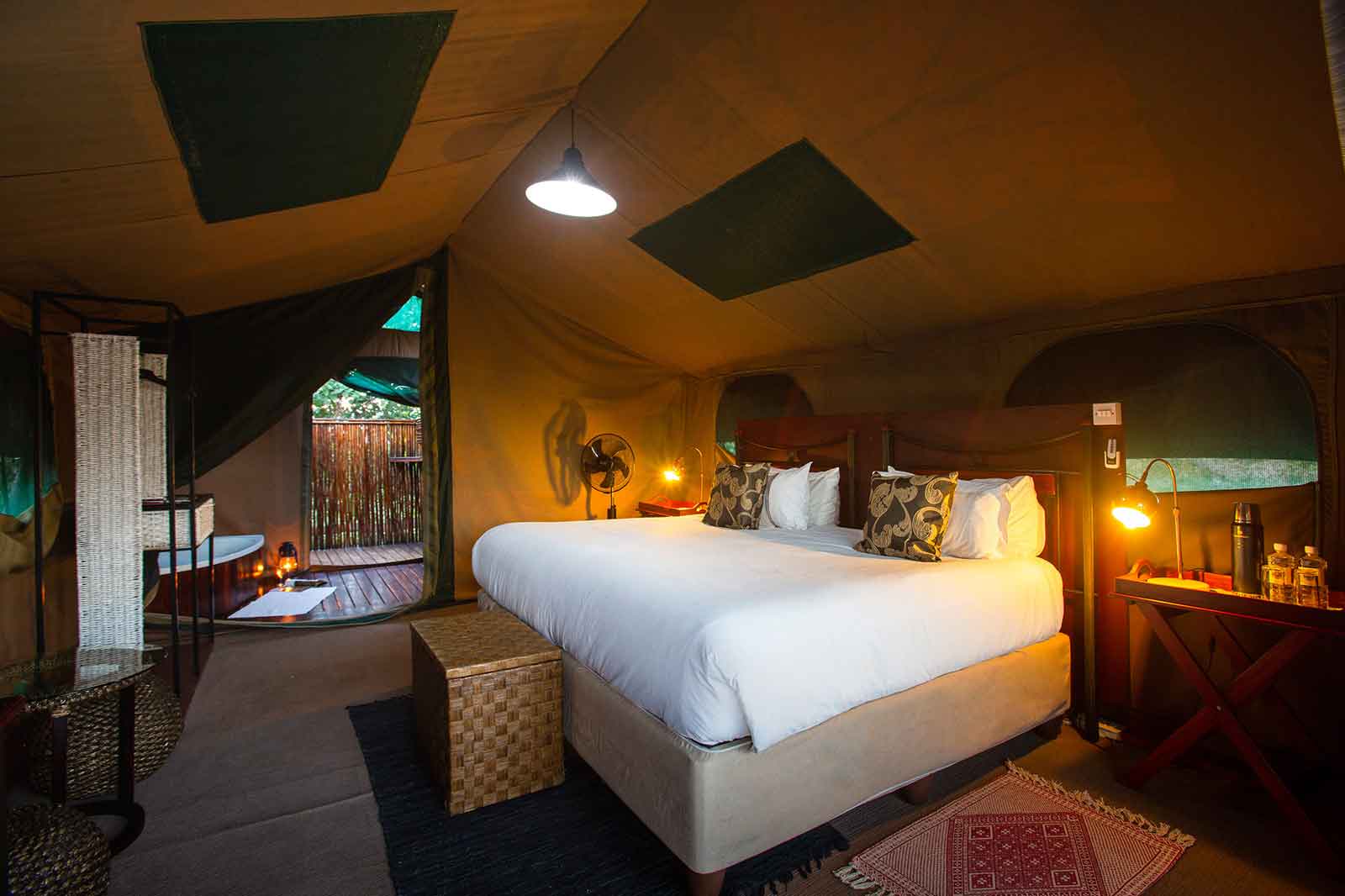 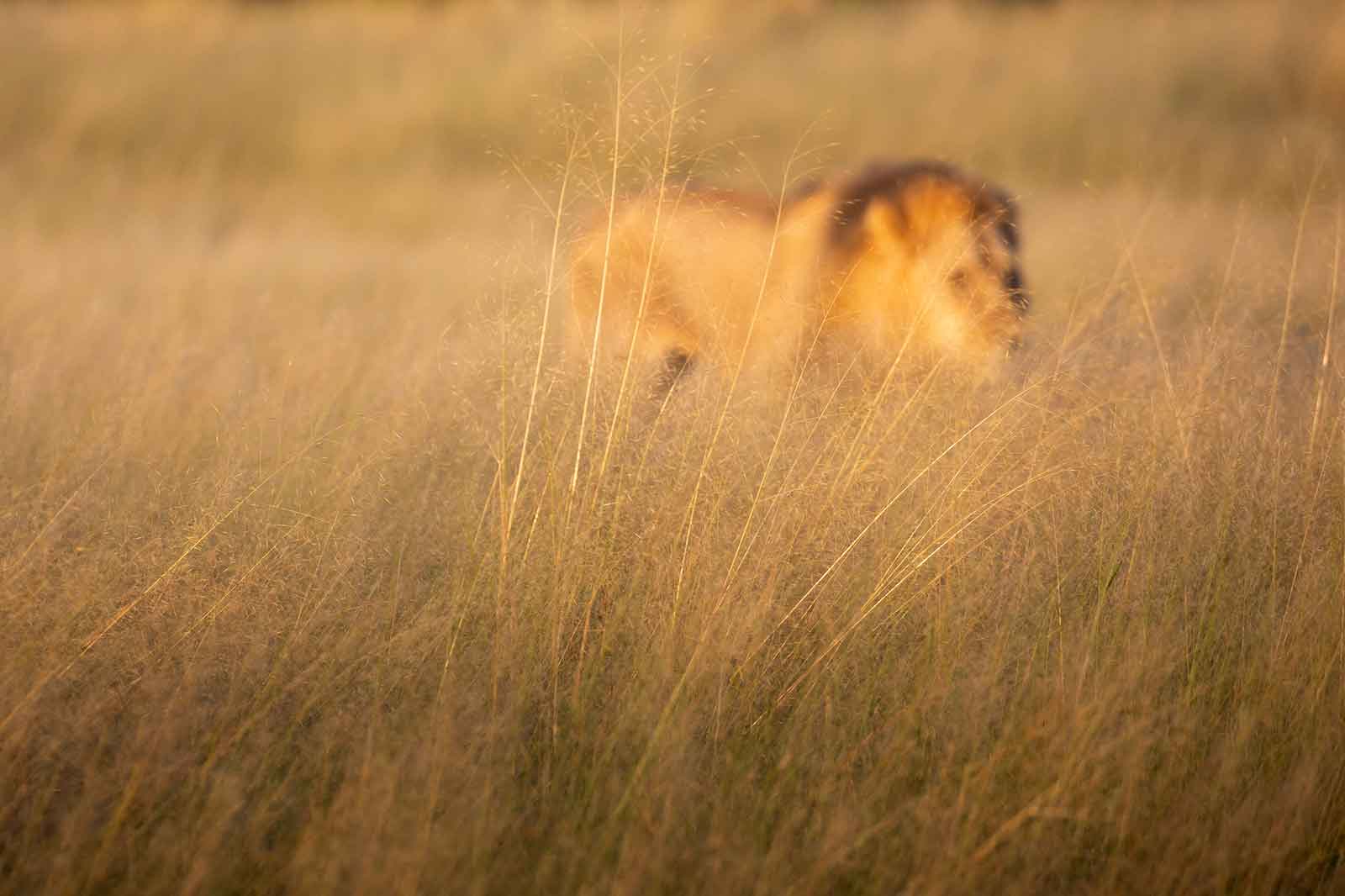 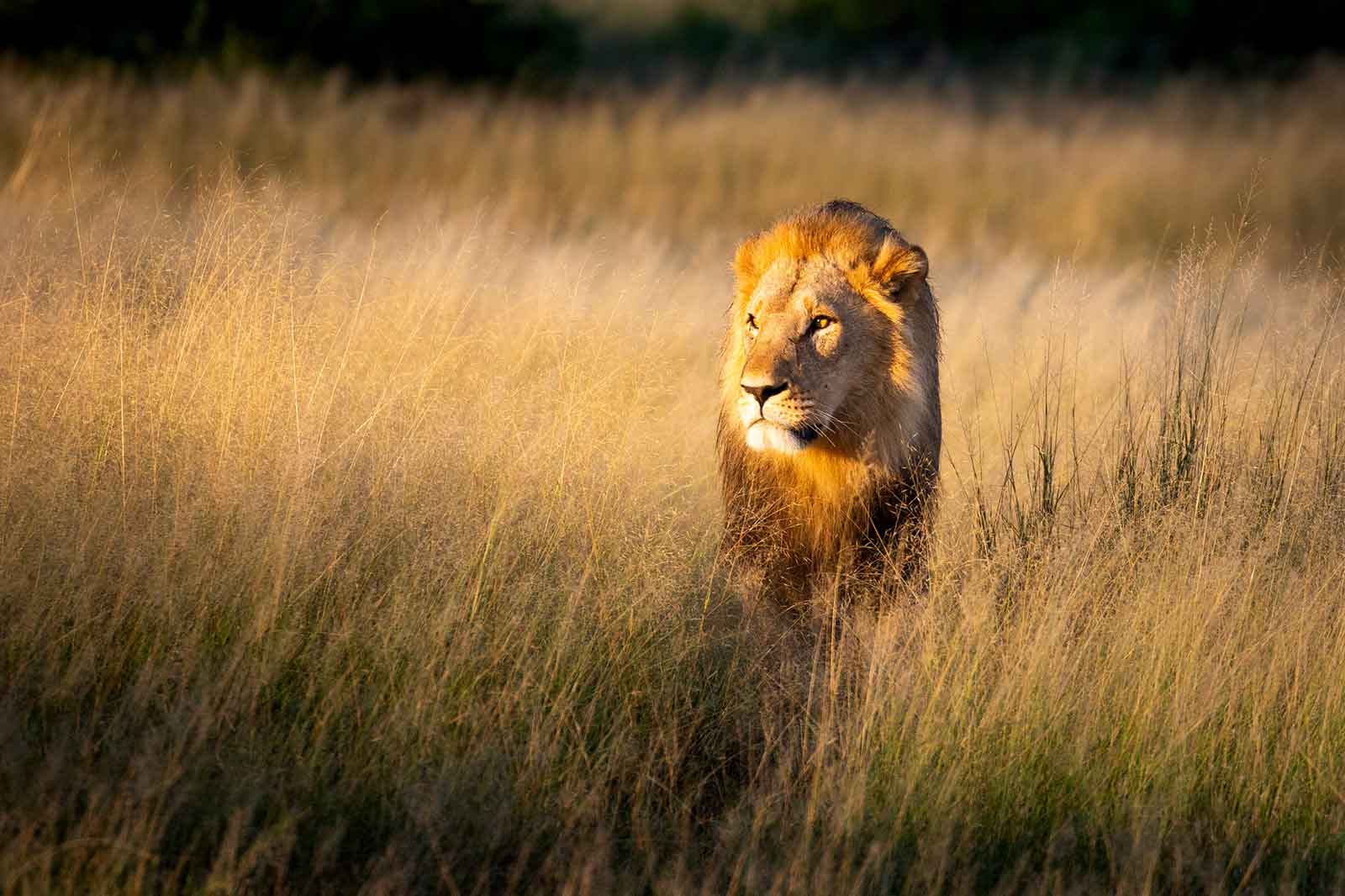 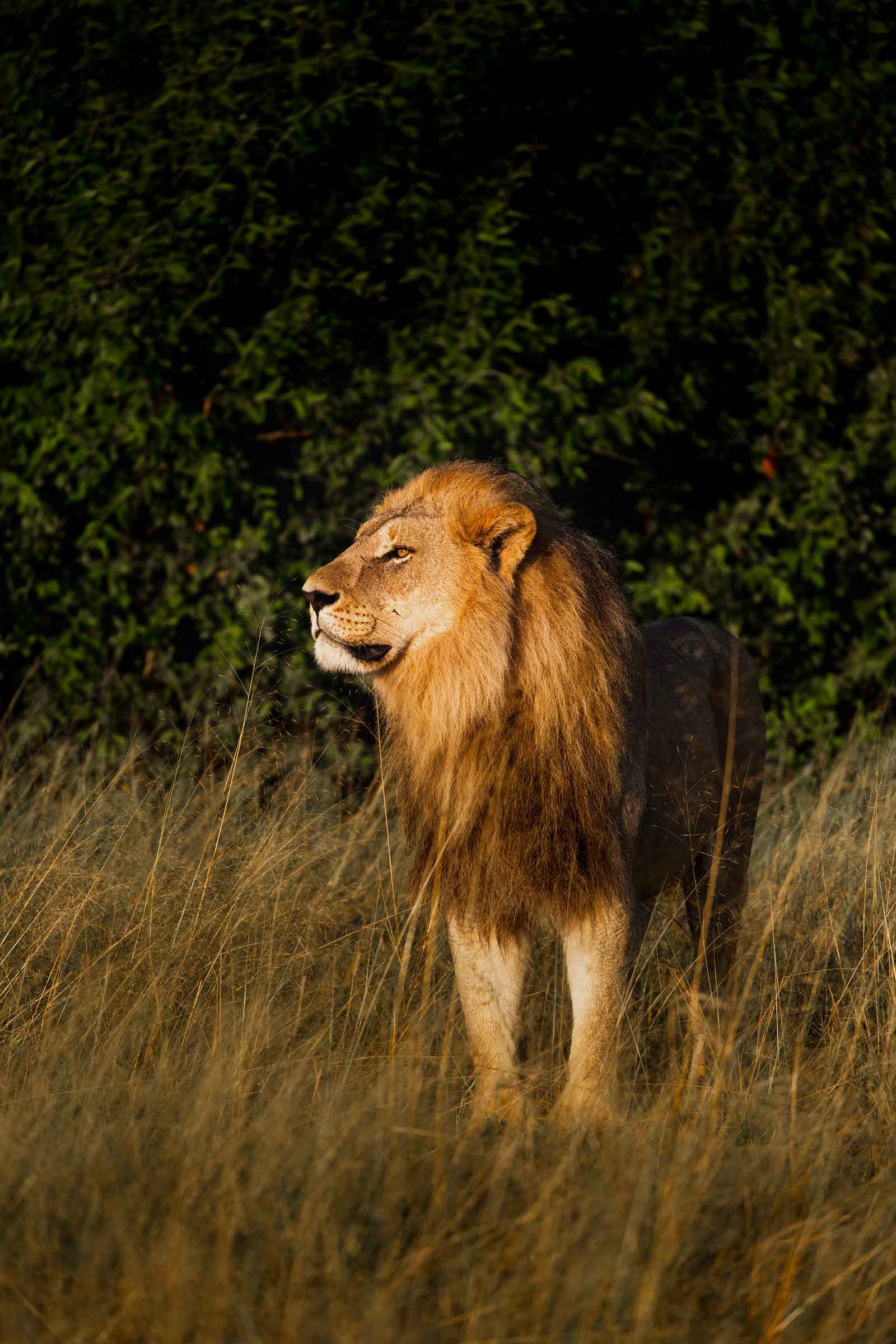 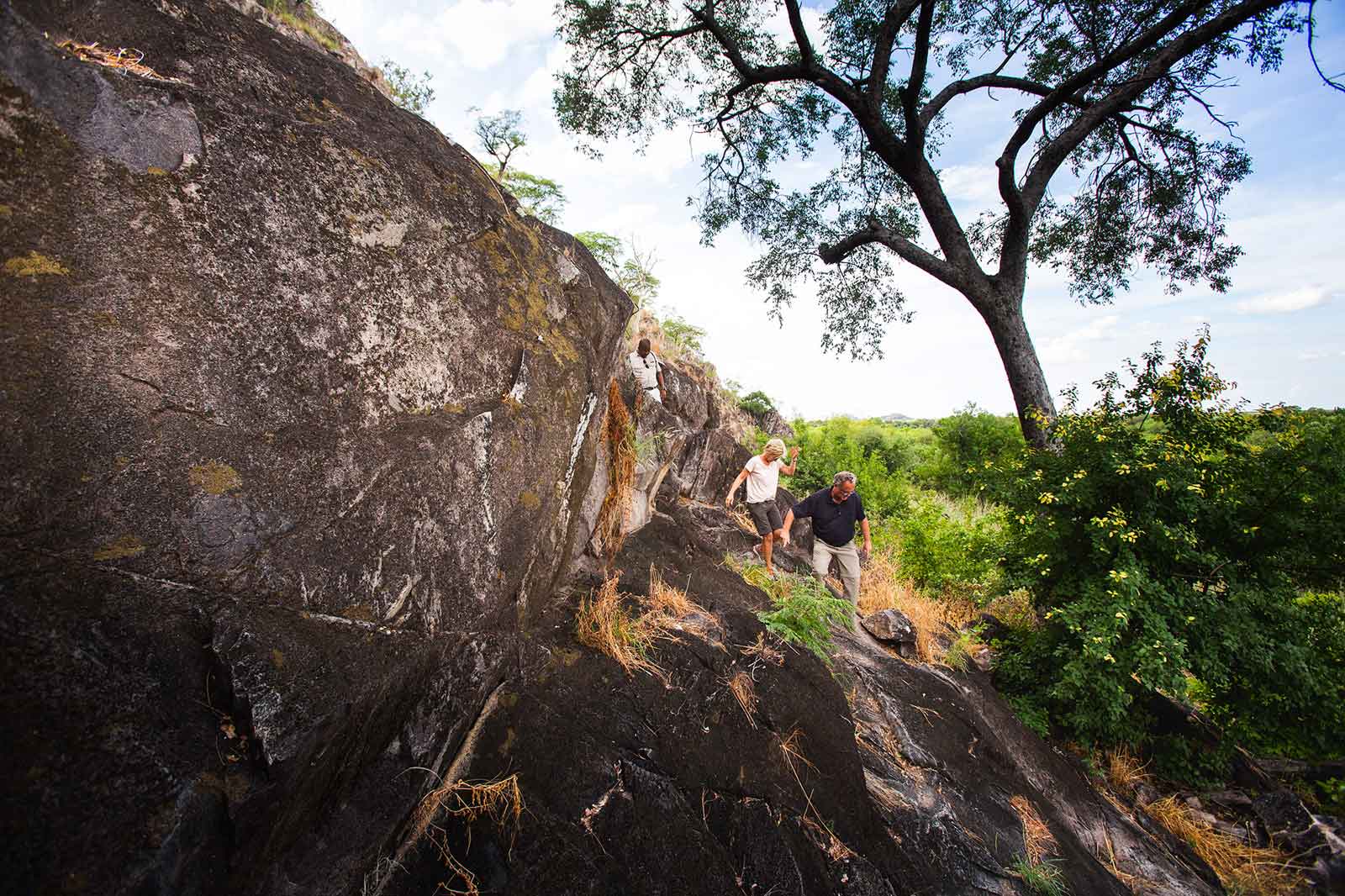 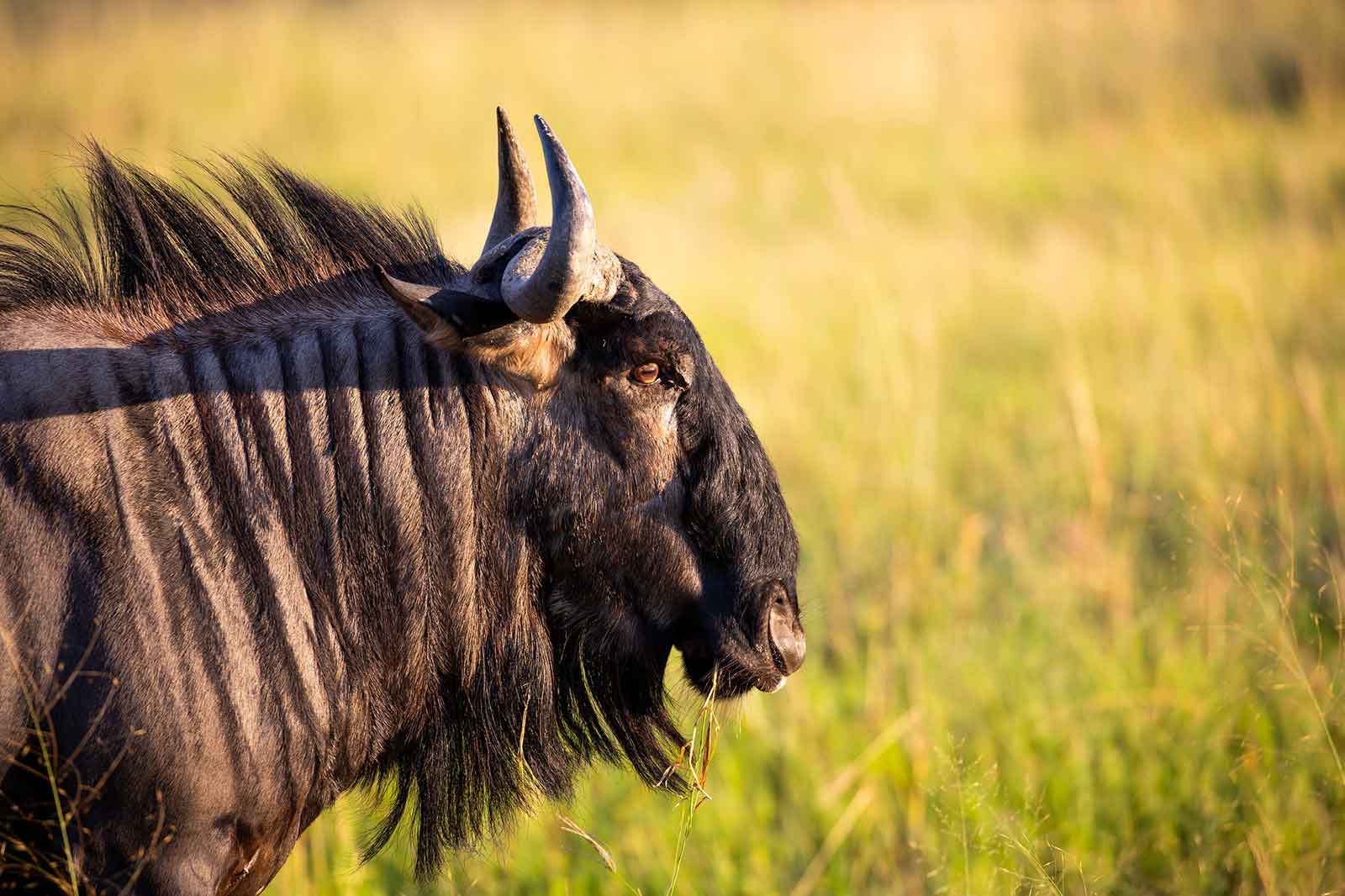