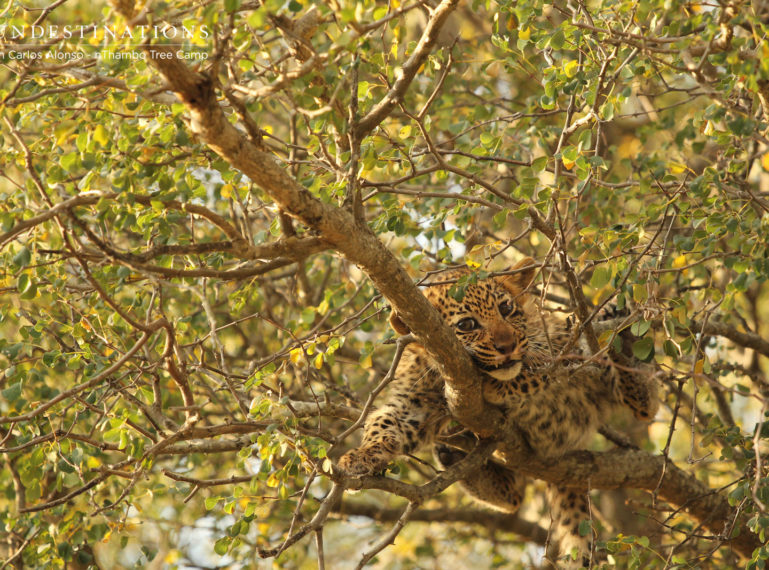 Despite being aloof and independent cats, leopards actually make excellent mothers. These muscle-bound felines lead a notoriously solitary lifestyle where it’s “each man for himself”. Leopards aren’t pride orientated and are rarely seen keeping company with other leopards. We only see leopards together during periods of mating or when mothers are rearing their young. Just because they aren’t pride and community orientated, doesn’t mean the females make terrible mothers. Quite the opposite, in fact.

The Klaserie’s Ross Dam leopardess is a mother – and grandmother – to a number of leopards in the area. On Mother’s day she even enjoyed the same meal that leopards Nyaleti and Rhulani feasted upon. She’s clearly cut out for motherhood and her genetic lineage is a strong force within the nThambo Tree Camp and Africa on Foot traverse. She is also mother to the young Bundu leopard, another commonly spotted leopard on the Klaserie traverse. And the news? We’ve just spotted her together with two new cubs! Who doesn’t love a cute leopard cub? 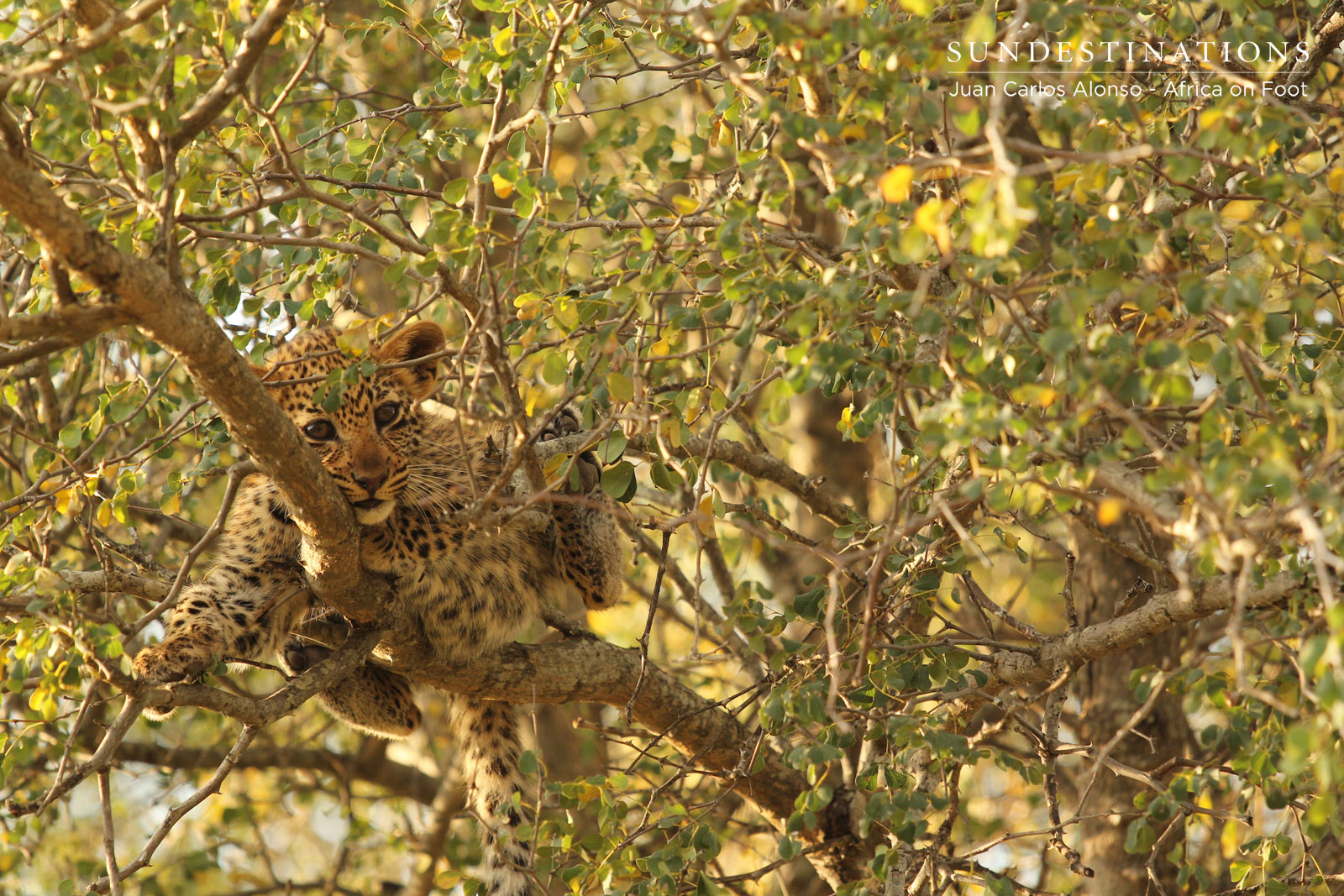 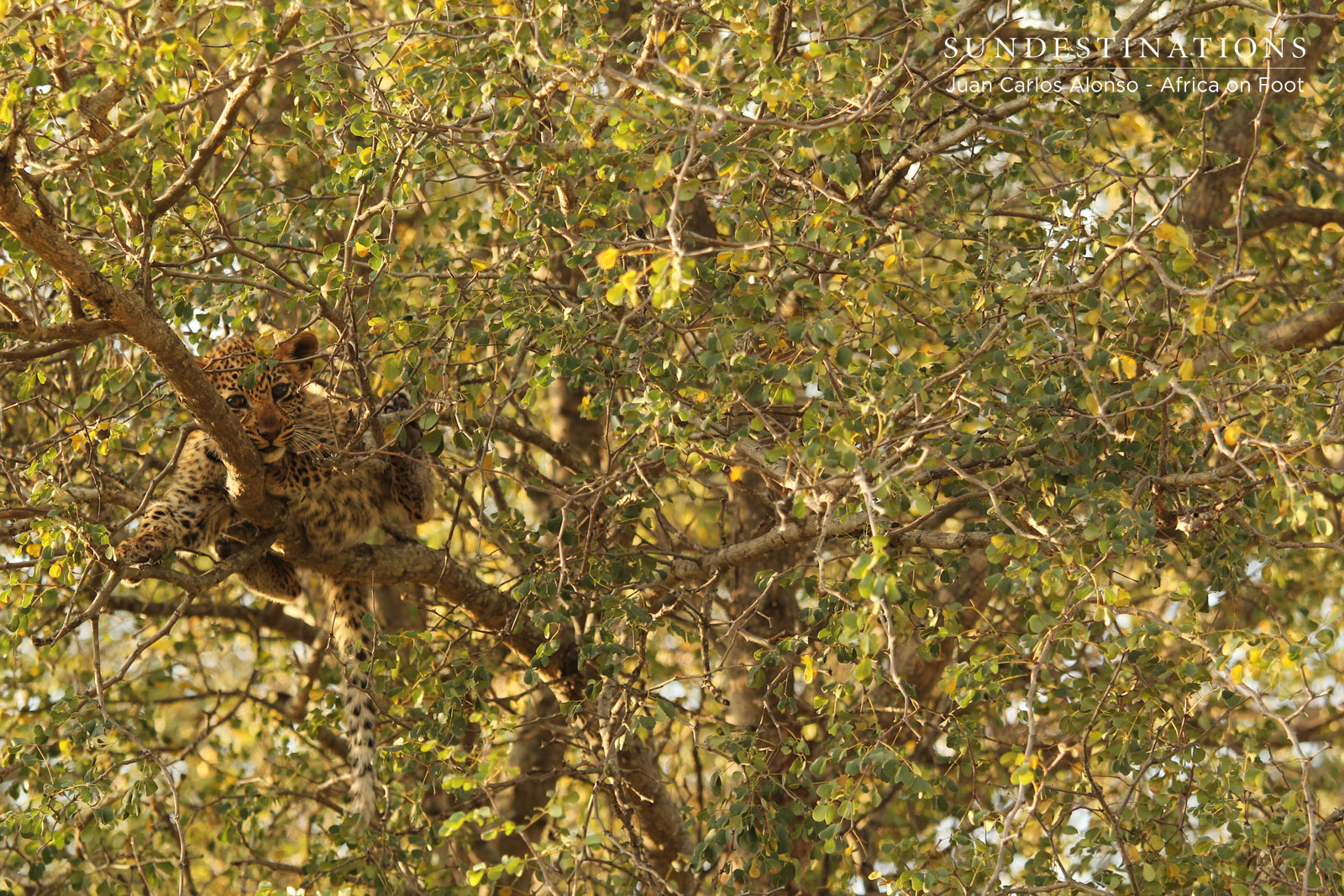 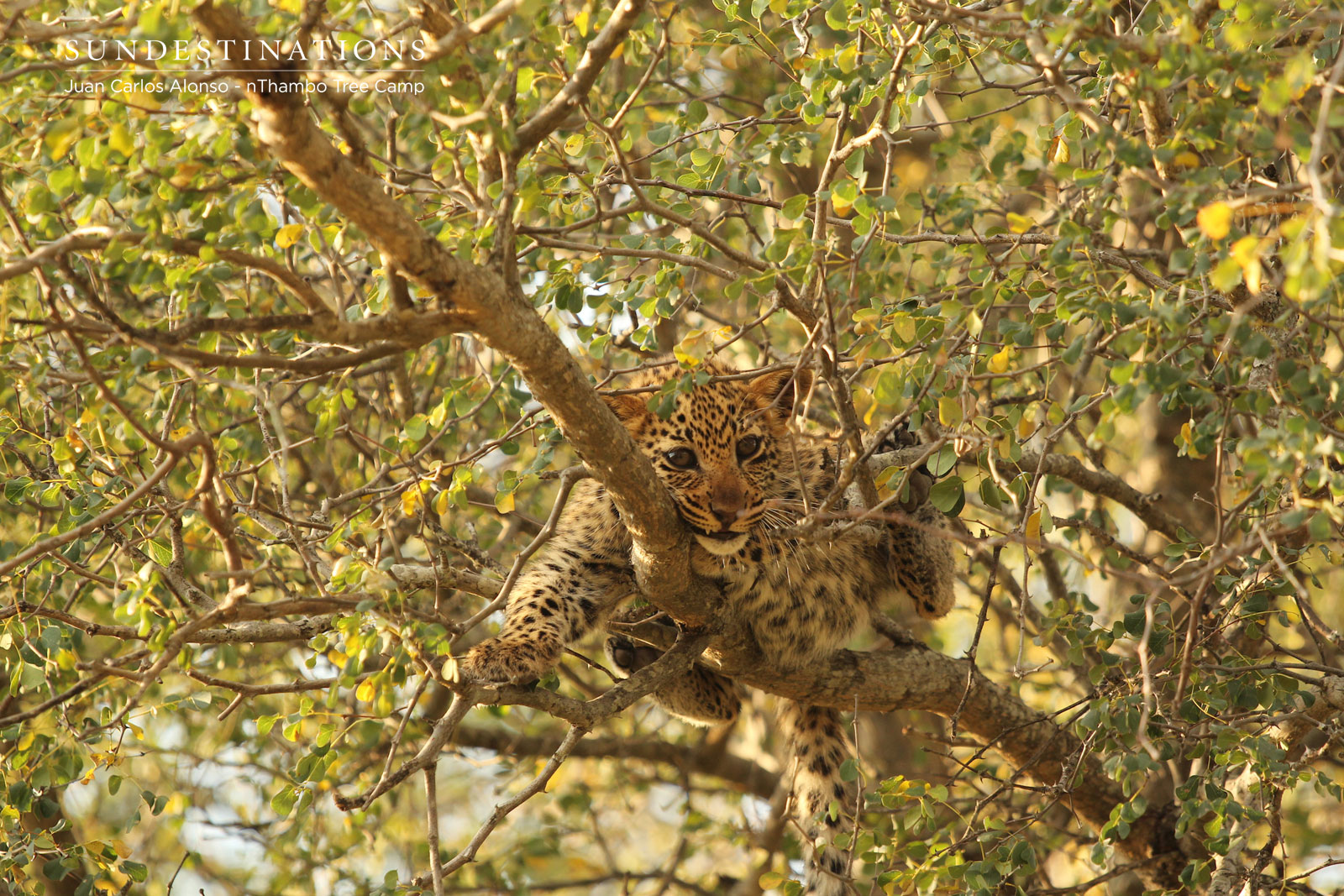 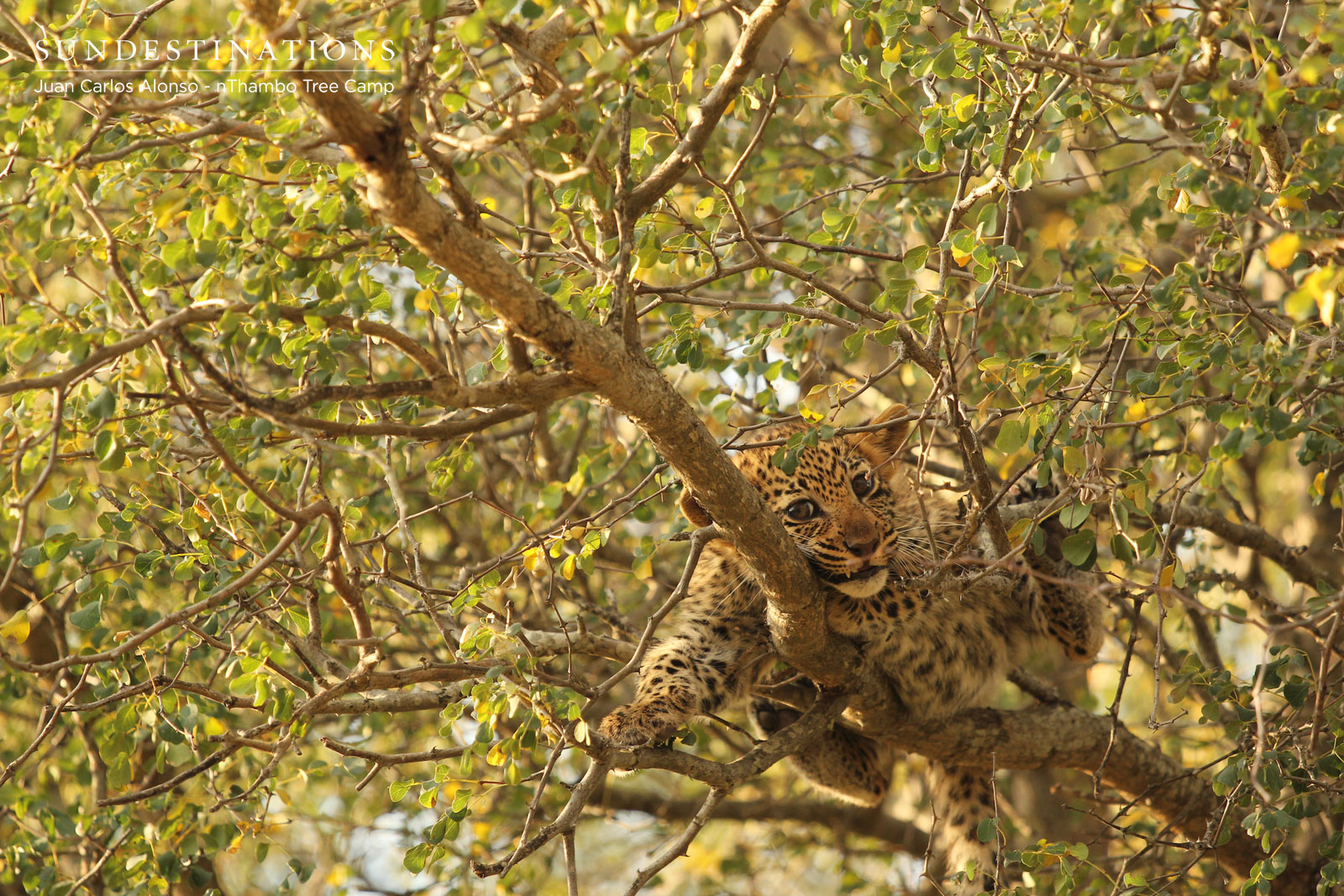 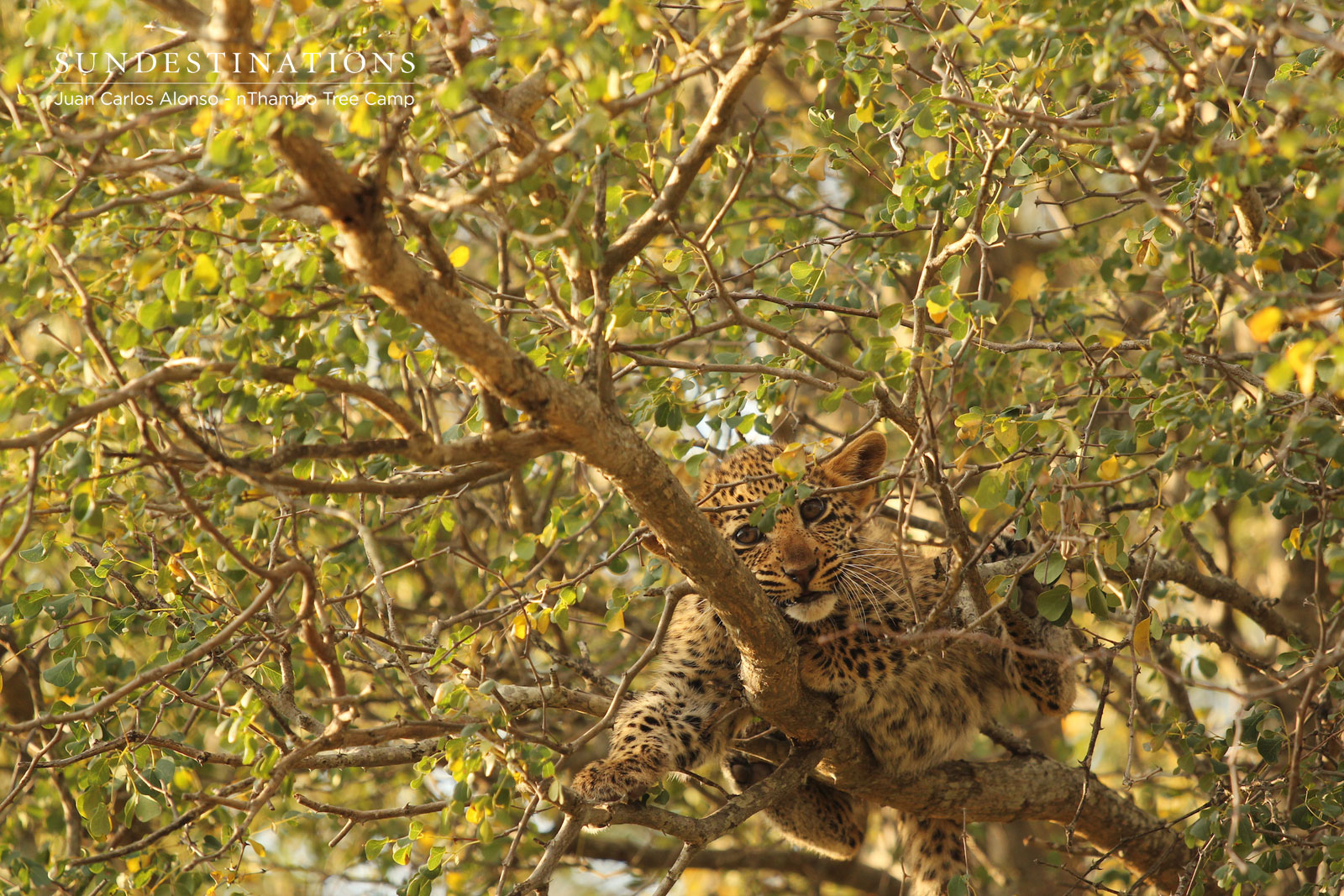 It’s hard to tell who sired the new additions to her leopard family dwelling in the thickets of the Klaserie, but we do know that the cubs are very young and vulnerable. Our guides have been lucky enough to spot the cubs on a couple of occasions, with the most recent sighting being shortly after Ross Dam made an impala kill. She made the kill and abandoned it in a tree close to nThambo. In a neighbouring tree a young cub was spotted ! A pesky hyena was lurking below the kill – they are one of the biggest threats to newborn leopard cubs.

Africa on Foot guide, Chade, said it’s imperative that the Ross Dam female doesn’t feel pressure and that sightings of the cubs are strictly controlled. Ross Dam and her inquisitive cubs need to feel at ease in their environment, and she needs a safe space to nurture her family without constantly in a state of flux. As a result, the team hasn’t pushed for prime viewing positions and up close sightings. Chade, Elmar and JC managed to take a few photos when one of the cubs was first discovered. We trust you will enjoy these images of the latest edition to the Klaserie!

Leopard cubs will stay with their mother in a protected area/den site for a few months while she nurtures them. When born, the cubs are completely helpless and face a high mortality rate in the wild – just like lion cubs. It’s vital that the cubs are watched closely and kept out of harm’s way. Hyenas pose as a massive threat to a leopard’s young and so do other predators. Cubs are therefore stashed for safekeeping. It seems that Ross Dam is keeping her cubs up high in the safety of a tree. While she conducts her hunts (alone) she will bring the meal back for her cubs. Her young will stay close to her side for up to 10 months, after which they will accompany her on hunts to learn the skilful ways of the mature leopard.

We’re keeping a close eye on these fluffy youngsters! 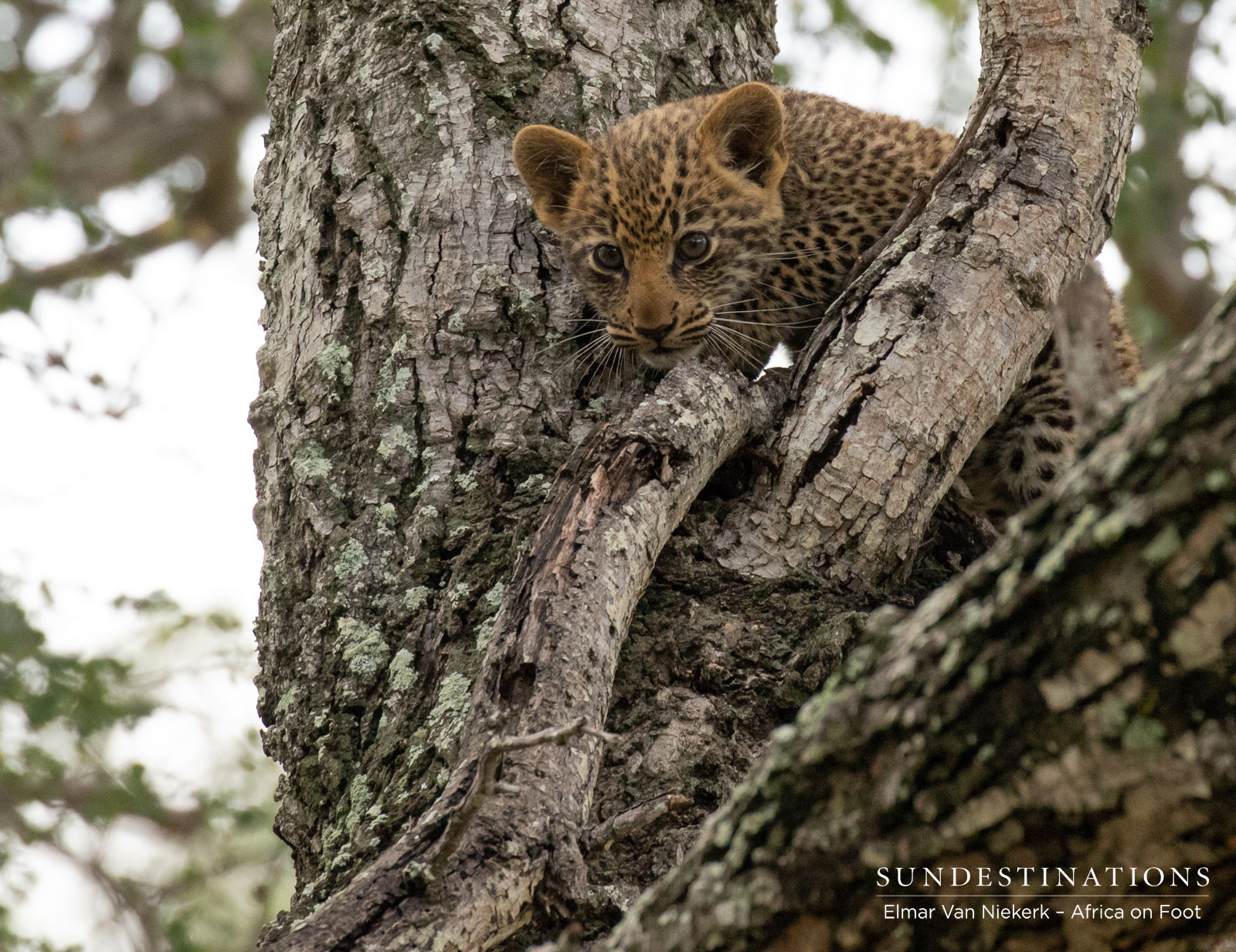 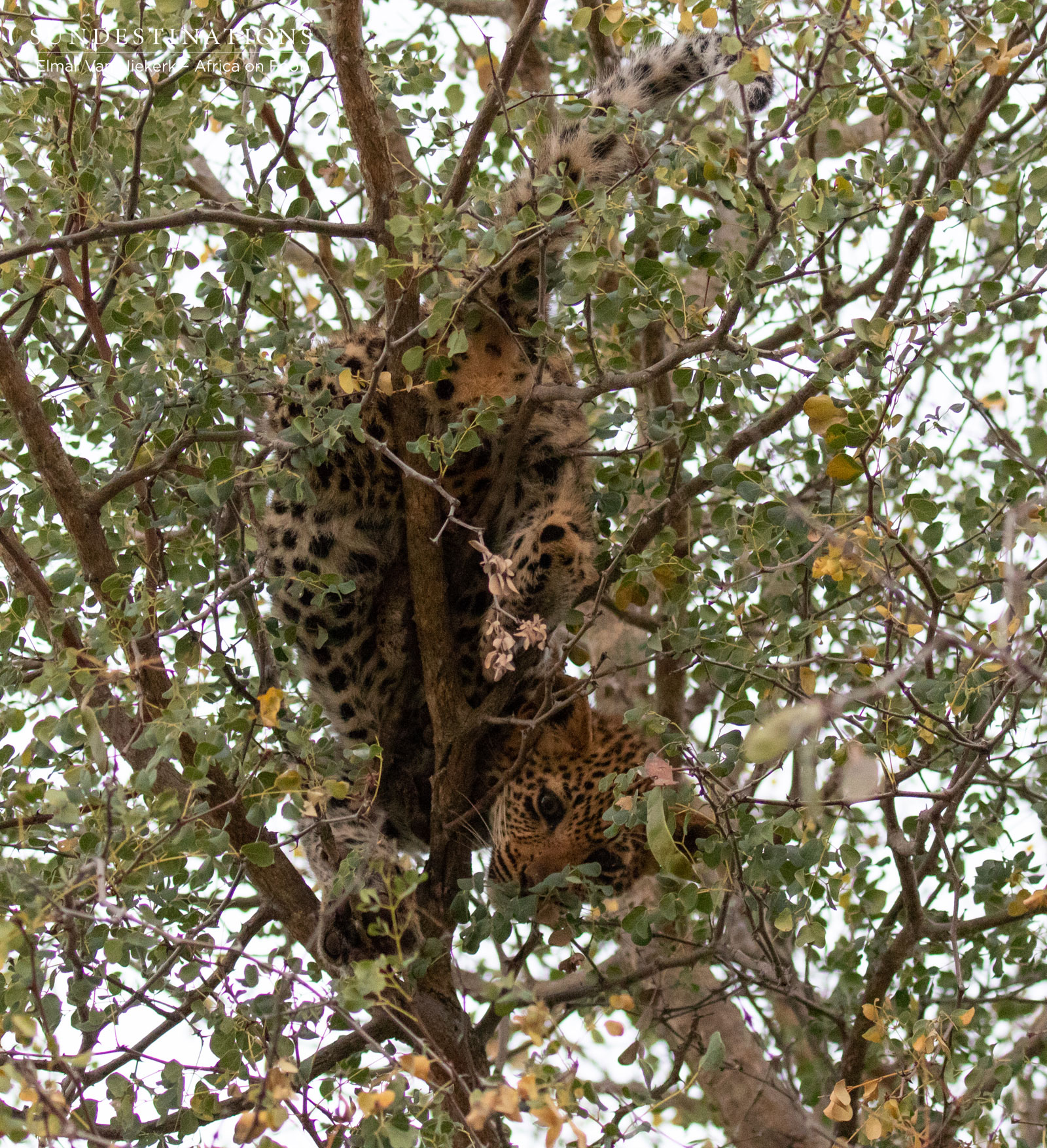 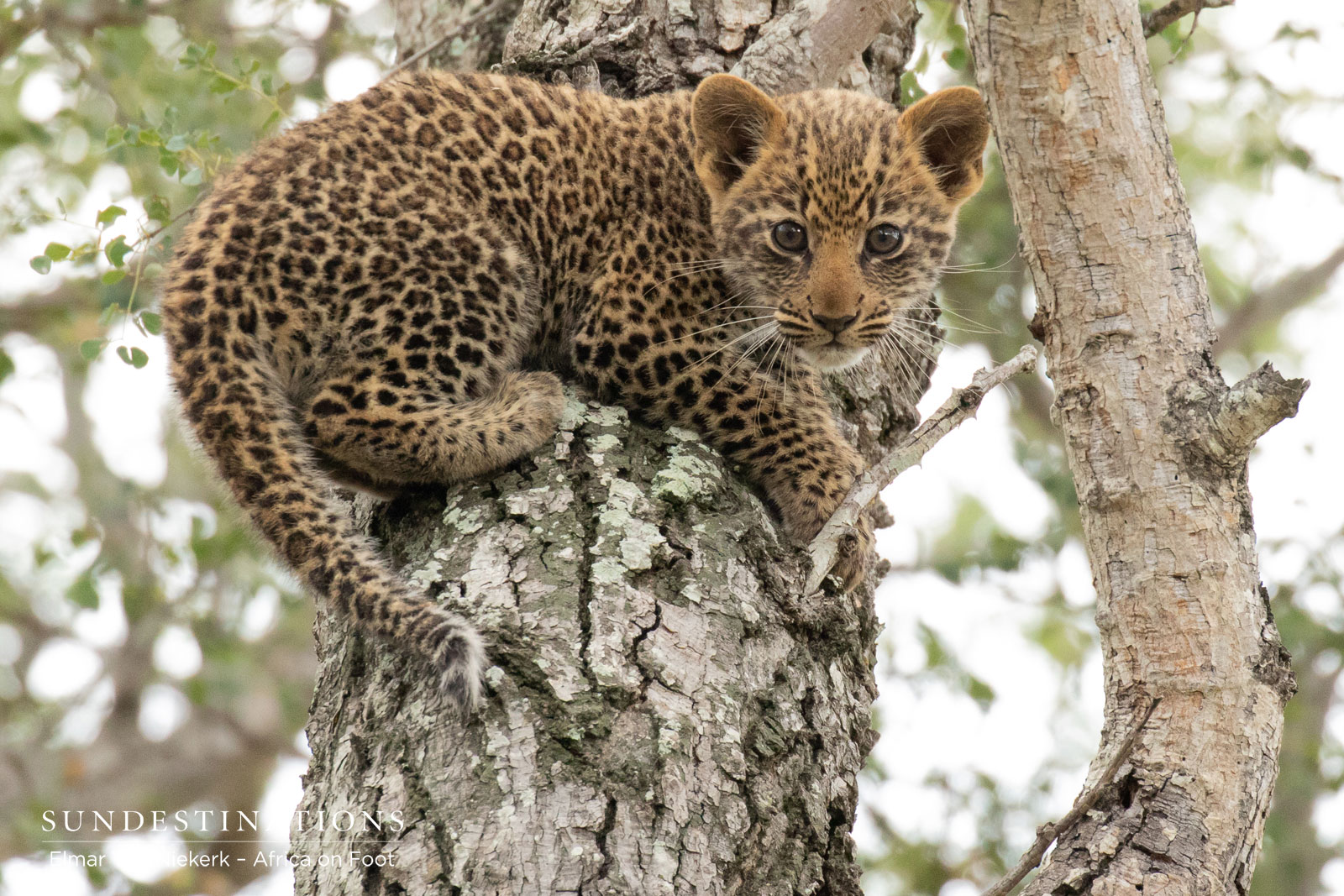 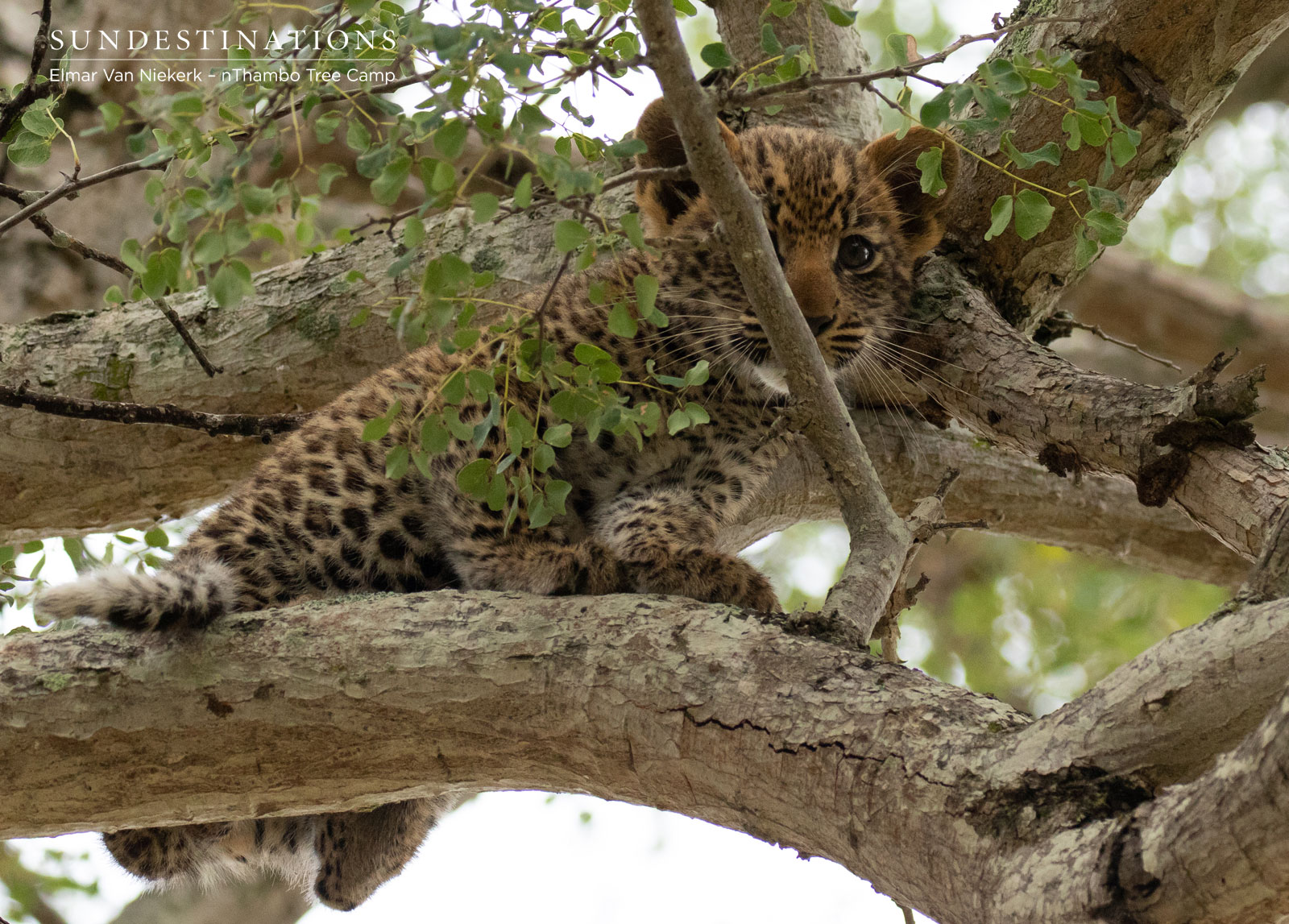 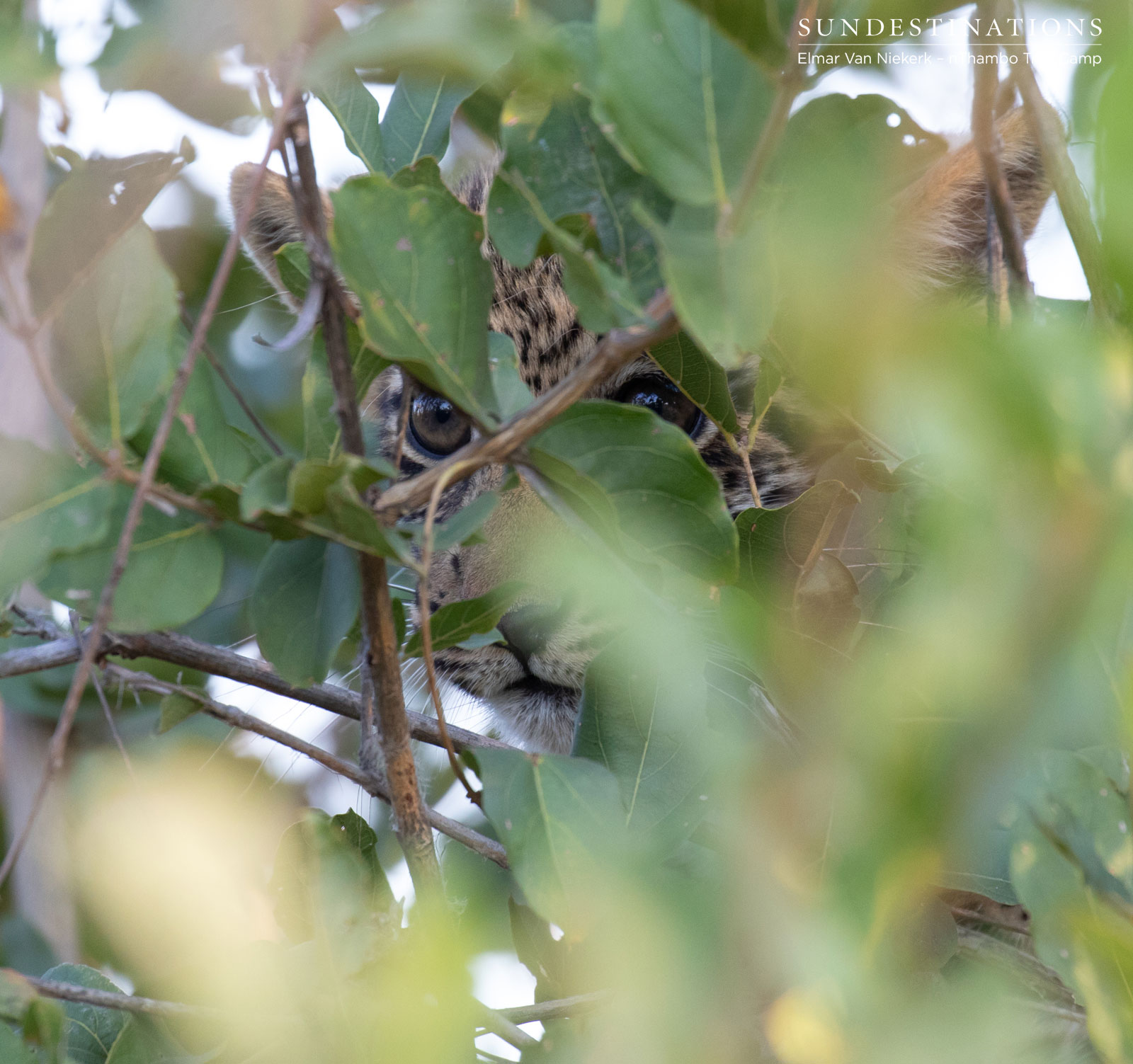 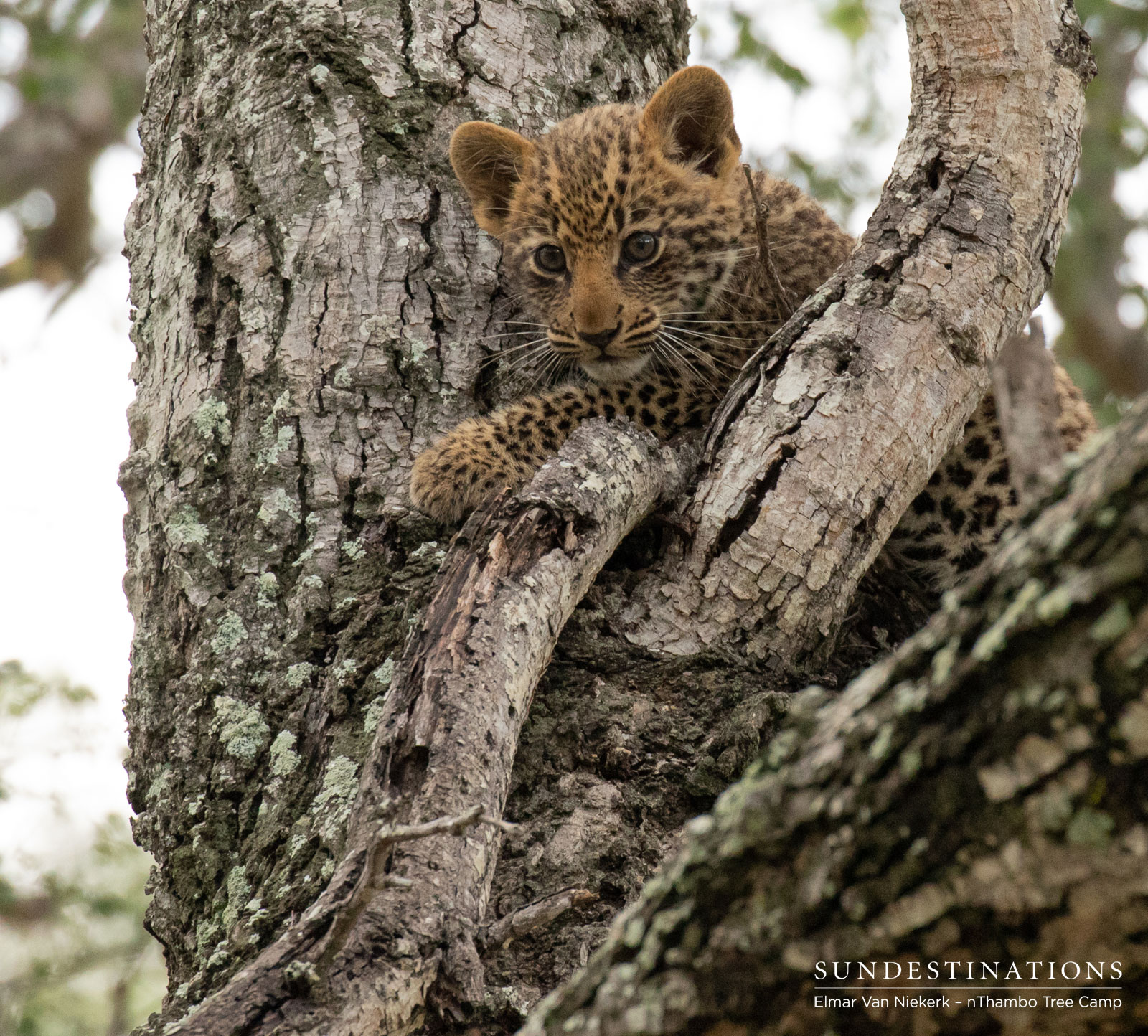