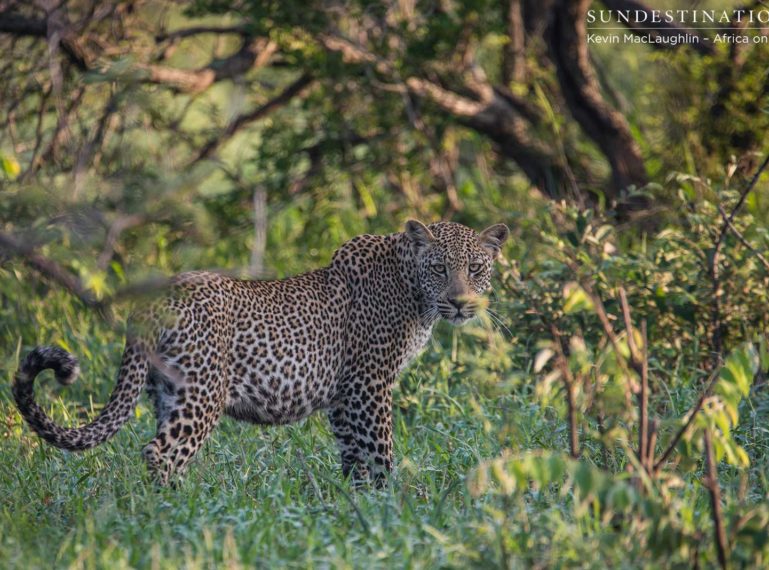 This morning’s safari held some exciting predator activity in the Klaserie, with a hijacking that happens all too often in the world of the wild: A pair of conniving hyena cronies stole an impala kill from leopards Ross Dam and Bundu. This mother-son duo was seen in the first moments of light this morning, apparently quite relaxed and right on the road side when guests from Africa on Foot and nThambo Tree Camp cruised passed in their game viewers. The leopards were actively slinking through the golden beams of light spilling through the trees and soon it became obvious they were watching something in the near distance… When we got a better look we saw a pair of hyenas feasting on a carcass about 50m away. Both leopards have full bellies, which made it likely that the hyenas had actually stolen the carcass from the leopards in an instance of playground bullying, which has a big part in the safari world. Leopards are often reported to lose their kills to these scavengers, as they would rather not engage in a fight and risk injury, so hyenas have come to know them as soft targets. The good news is that Ross Dam and her boy, Bundu, had already enjoyed a good portion of their impala kill, but were nevertheless disappointed to let the rest go. The leopards followed the hyenas for a little while, looking immaculate in the early morning surroundings, and were soon close enough to the sneaky hyenas to express their dissatisfaction with some vocalised growling and hissing. The hyenas were unperturbed and continued to feast on their stolen kill, and guests watched in awe at the unravelling scene. The leopards gave a half hearted attempt at claiming back their meal, but were unsuccessful – the famous scavengers had won over the carcass and would be willing to draw blood before giving it up!

This remarkable predator interaction was thoroughly enjoyed by all. What began as an incredible signing of not only 1, but 2 leopards, turned into an incident involving leopards, hyenas, and a stolen kill! All in a morning game drive in the Klaserie…