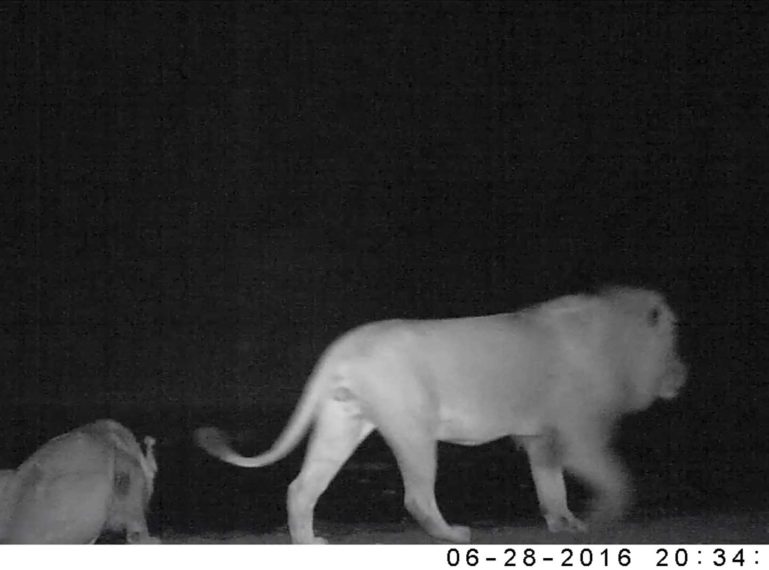 Every week we are amazed by what we find on our hidden camera trap reels. nThambo Tree Camp guide, Bjorn, has made it his personal mission to record what goes on in the Klaserie while nobody is watching, and yesterday’s weekly video post featuring the results revealed some great wildlife activity. We were excited (as always) to see a male leopard make an appearance in the dead of the night, and just when we thought that was our top camera trap sighting for the week, this happened! The Mapoza males arrived at Twin Pans, around about the time guests would have been sitting around the dinner table back at the lodge. The lions’ behaviour was certainly something interesting, too! After both males walked into full view of the camera trap, they crouched down to drink from the pan. What we saw next was the older, bigger-maned male step over the younger one and stop just outside of the camera frame. Then, the younger male turned and mounted his coalition brother, and simulated mating with him. We can see the activity take place just to the left of the frame, and after a few seconds he dismounts and turns back to the pan to drink and the older male gets up and walks across the frame. This is actually very typical behaviour between male lions. It is a part and parcel in the life of a male lion to establish a dominance hierarchy, and when a coalition is formed like this one, there is generally a dominant individual. Dominance is established, most often, according to strength and size, so it is generally the bigger, older male that will be dominant in a case like this. In this instance we see the younger male doing the mounting – taking his chances at building his position in the coalition.

Eventually, the bigger male circles the pan and looks into the darkness, while the younger male stays put and watches. Once the big male turns to leave the pan, the other gets up to follow. It’s fascinating to see this sort of behaviour play out in the wild, and we have Bjorn’s camera trap to thank for that! The Mapoza males are clearly making their mark in this territory that, up until recently only belonged to the Trilogy. Times are changing in the lives of Klaserie lions! Watch this space for developments…