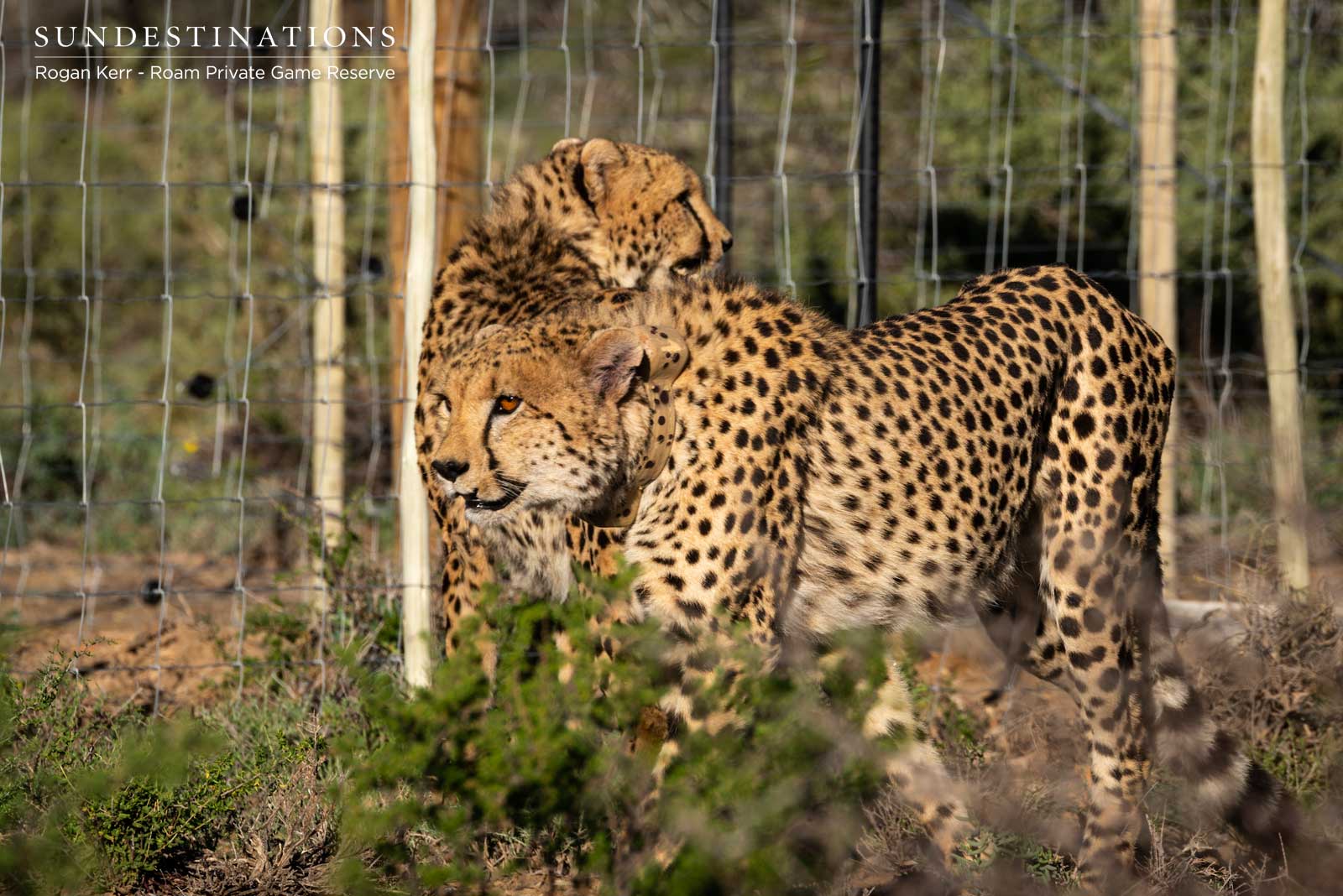 Flanked by the Cape fold mountains and hugged by undulating endless desert landscapes, lies the 5000 hectare Roam Private Game Reserve. The unique scrubveld of the Karoo basin gives rise to various xerophytic flora, and is also home to abundant species of plains game, birdlife and small predators. The arid plains are dotted with a wealth of geological masterpieces such as archetypal Karoo koppies, sandstone and dolerite intrusions. With so much to offer in terms of providing endless natural habitats, the area was analysed and identified as being a potential location that could sustain the presence of cheetah. After considerable time and much research, the owners of Roam – together with leading conservationists – decided to introduce cheetah into the reserve. A couple of weeks ago a coalition of 2 slender and remarkable cheetah males were released onto Roam’s traverse. And videographer Rogan Kerr was there to film the momentous occasion.

1.Why is the Karoo biome ideal for cheetah?

Technically it isn’t… But it does form part of the cheetah’s historic range. Cheetah are well adapted to living in arid environments. Such adaptations include the ability to get all of their fluid needs from a carcass. It may be a misconception that cheetah prefer vast open spaces as studies have shown that cheetah fare better in semi-wooded areas, which makes Roam the ideal habitat as far as the Karoo goes. Roam has 14km of riverbeds which create Acacia thicket and suitable hunting locations for cheetah.

2. What was the driving force behind the decision to release cheetah into the wild at Roam?

There are no records of wild free roaming cheetah having occurred in the area since 1860 when 5 were killed near Beaufort West. We wanted to bring cheetah back to an area they occurred in historically; thus growing the population in South Africa from its current 1300 wild cheetah. Whilst we can contribute to cheetah conservation, the reserve is not suitable for larger predators such as lions.

3. What is the origin of these cheetah?

The cheetah come from Tiger Canyons in the Free State. The are from a litter of 5 cubs and are the only males in this litter. The property is owned by well-known photographer and conservationist, John Varty. We were particularly fussy about the source of the cheetah as we needed cheetah that came from the Karoo. Cheetah that are brought into the Karoo from more lush parts of their range tend to suffer in the Karoo, leading them to have only a 20% survival rate. Cheetah relocated within the Karoo have a 70% chance of survival as they have already adapted to their environment.

4. How many are there currently, and will you release more at Roam?

We have introduced two cheetah for the time being. They are brothers and have formed a coalition. This means there is a life long bond between them and they will remain together forever. We hope to introduce a female (or two) at some point in the future. Our target for further release would be 1 – 1.5 yrs.

This will give us a chance to monitor the impact the cheetah have on our wildlife population and make informed management decisions for future cheetah. Any female brought to Roam will be allowed to mate with the current males and have cubs. She would then be placed on contraceptives. Again we would monitor and update our management strategy based on the impact of the additional cheetah. All cubs would need to be relocated to other suitable reserves once they reach maturity.

5. Who was involved in this conservation project?

The largest role player in getting the cheetah to Roam Private Game Reserve (other than Roam) was the Endangered Wildlife Trust (EWT). Vincent Van Der Merwe heads up the Cheetah Range Expansion Project. This project aims to manage the genetics of Southern Africa’s wild cheetah population. Through doing so they are able to supply small reserves with cheetah, while ensuring the population as a whole remains genetically viable. As such, any cheetah cubs from Roam would be part of this project and be introduced to suitable reserves deemed viable by EWT.

6. How long did the process take and what were the logistics involved?

The process of getting the cheetah to Roam has been a lengthy one. The first step was to develop a Predator Management Plan (PMP), which was originally drawn up by Ken Coetzee of Conservation Management Services in Nov 2016. From there it was submitted to Cape Nature, the conservation authority in the Western Cape, for review and approval. Cape Nature requested a few amendments which were done by Roam management in Sept 2017.

The PMP was finally approved in March 2018 at the same time the approval for the fence was given. We had to get our boundary fences in line with Cape Nature policy (2.4m with 6 internal electric wires). In order to move any wild animal between properties or provinces, permits for import/export and transport are required.

These were applied for in March 2018 and approved in April 2018. Meanwhile, at Tiger Canyons, the cheetah needed to be genetically tested and microchipped. This information was them submitted to the Free State Conservation authorities who issued the cheetah with passports.

On the day of transport Don and Vincent went to Tiger Canyons to assist with the sedation of the cheetah. The sedation was done by a qualified vet from Colesberg. More blood samples were taken for the EWT database and the cheetah were fitted with tracking collars. Once loaded into transport crates, the sedative was reversed and the cheetah woke up. They then undertook a 5.5hr journey in the transport crates on the back of a bakkie to the reserve where they were released into an acclimation boma.

7. Now that the cheetah have been released into an enclosed area, what is the next step?

The cheetah will remain in the acclimation boma for a minimum of six weeks. This will give them a chance to adapt to their surrounds in an environment where they can be monitored. After this they will be released onto the greater reserve. They will continue to be monitored with the aid of the tracking collars. A staff member will now be responsible for recording any kills they make and what areas of the reserve they are frequenting. Should we find they are struggling to adapt to their new home and are unable to kill sufficient prey, we will assist.

8. What is the feeding process?

Cheetah need approximately 3kg of fresh meat every day. This is not to say they need 3kg everyday but can eat 9kg in one sitting and only eat every three days. At the moment we are supplying their food in the form of springbok that have been harvested from the reserve.

We feed one springbok carcass every three days into a camp within their boma. This camp is small and can be closed off from the larger boma in the event we need to closely monitor the cheetah. When we feed we blow a whistle to habituate them to the idea that the whistle means food. Should we need to feed them on the greater reserve at some point this will assist in alerting them to the fact that we are bringing them a carcass. It also prevents them from expecting food from any of the farm vehicles.

Abigail says, “The cheetah  are very comfortable with human presence on foot. We are thrilled about this – we prefer not to off road in the Karoo environment where plants take years to recover. This means that once the cheetah are located, guests can leave the vehicle with their guide and view the cheetah on foot from a distance not closer than 15 meters. We will unfortunately have to restrict viewing on foot to guests older than the age of 16.”

Due to shifting tectonic plate movements and change in climate patterns, the Great Karoo is home to a well-preserved ecosystem that spans millions of years. This has led to many discoveries of ancient fossil beds and also insight into early human lifestyles. The Great Karoo is host to an incredible history, unique culture and evidence of early civilisations. Roam Private Game Reserve offers the ideal place for adventurers, explorers and those simply looking for a tranquil place of relaxation. With a focus on conservation projects and protecting the ‘veld, visitors to Roam can delight in the knowledge that their stay is one that focusses on eco-tourism. 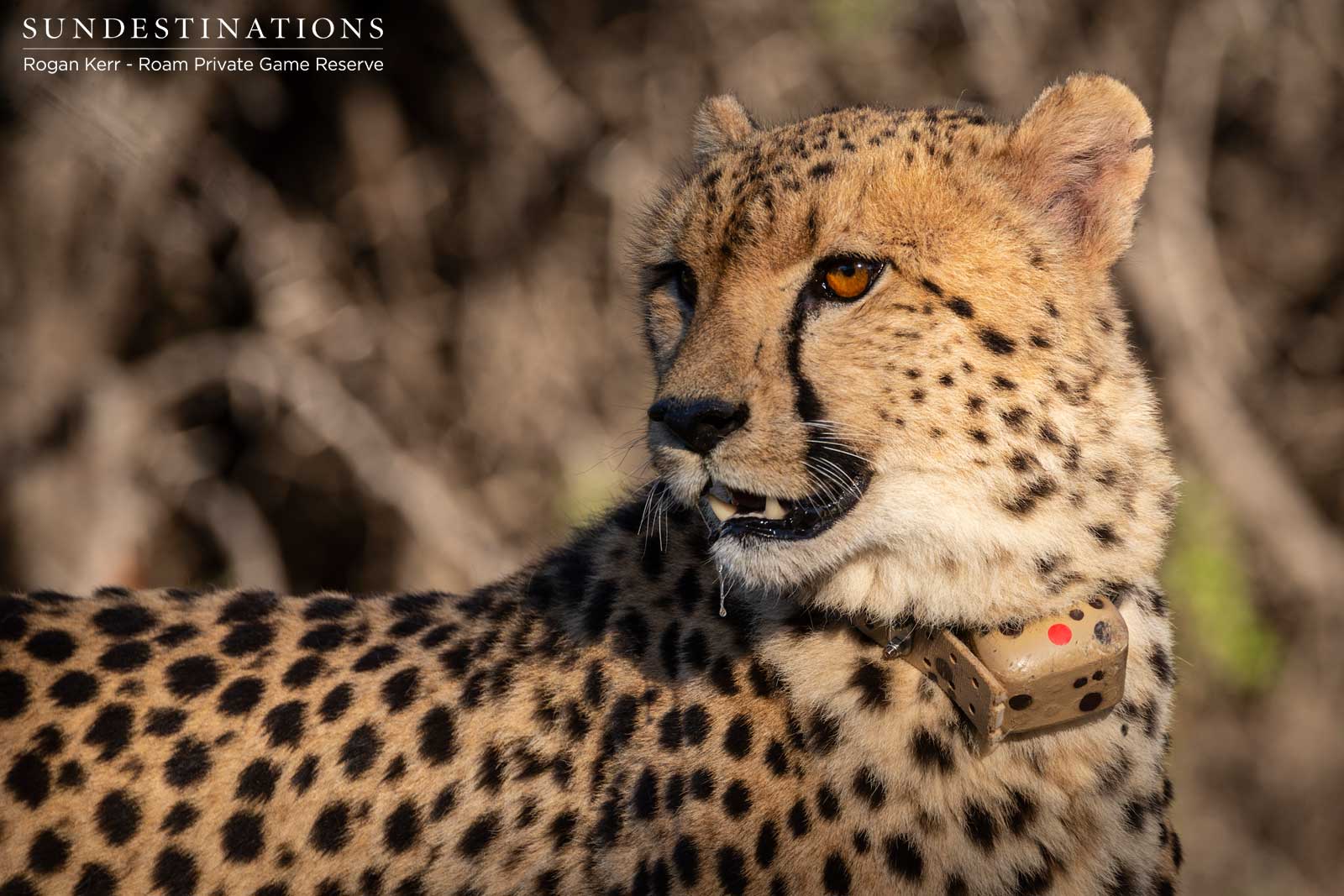 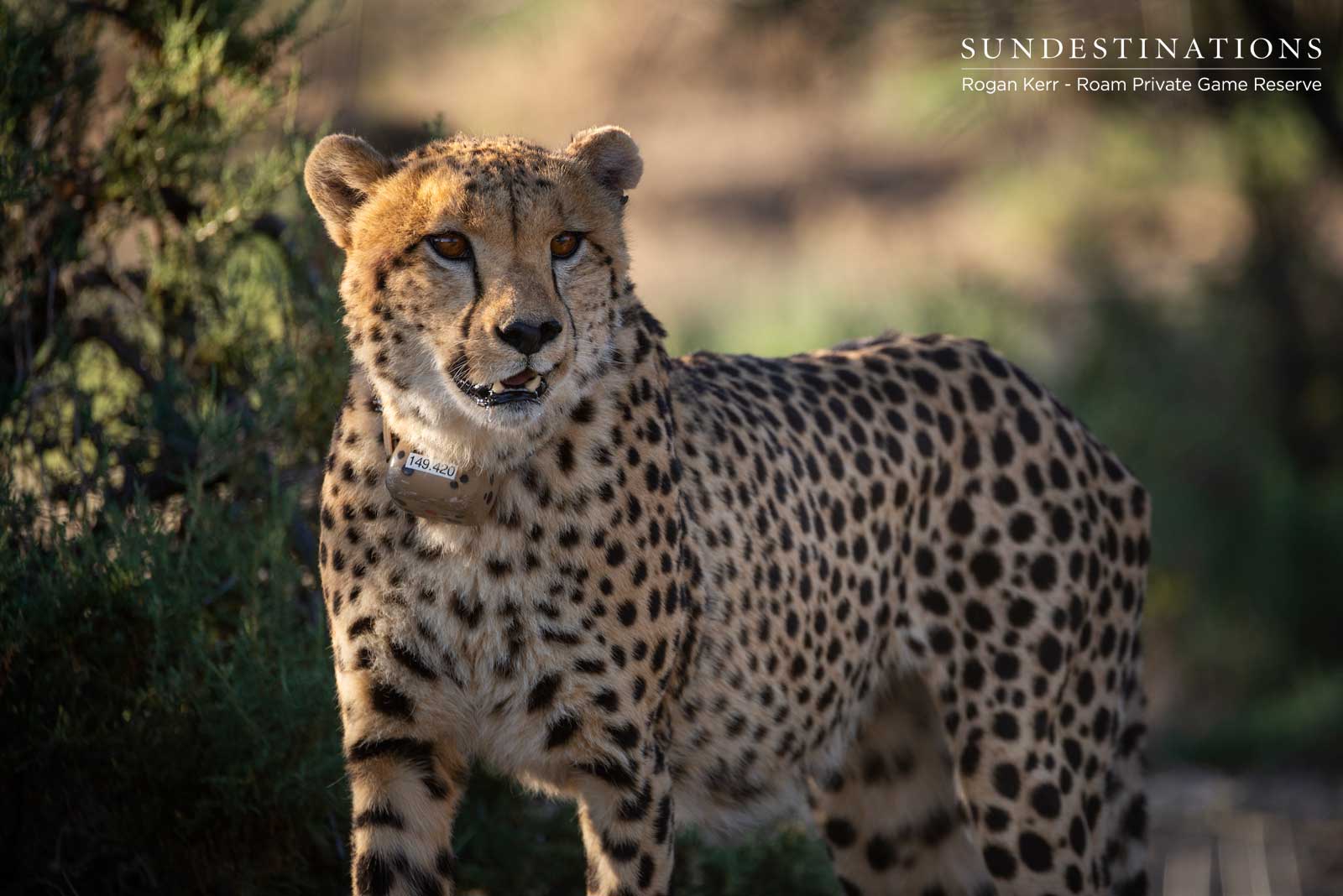 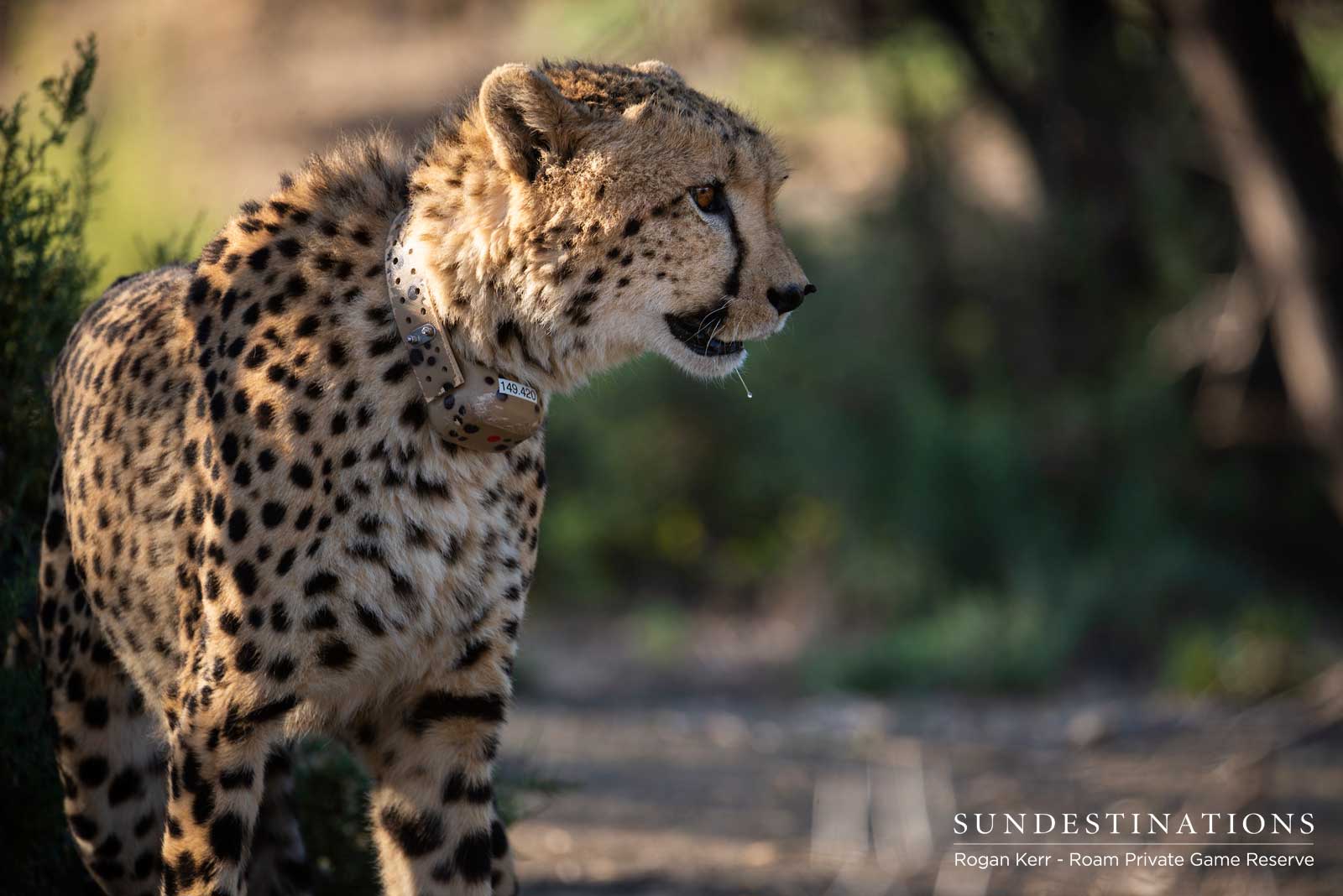 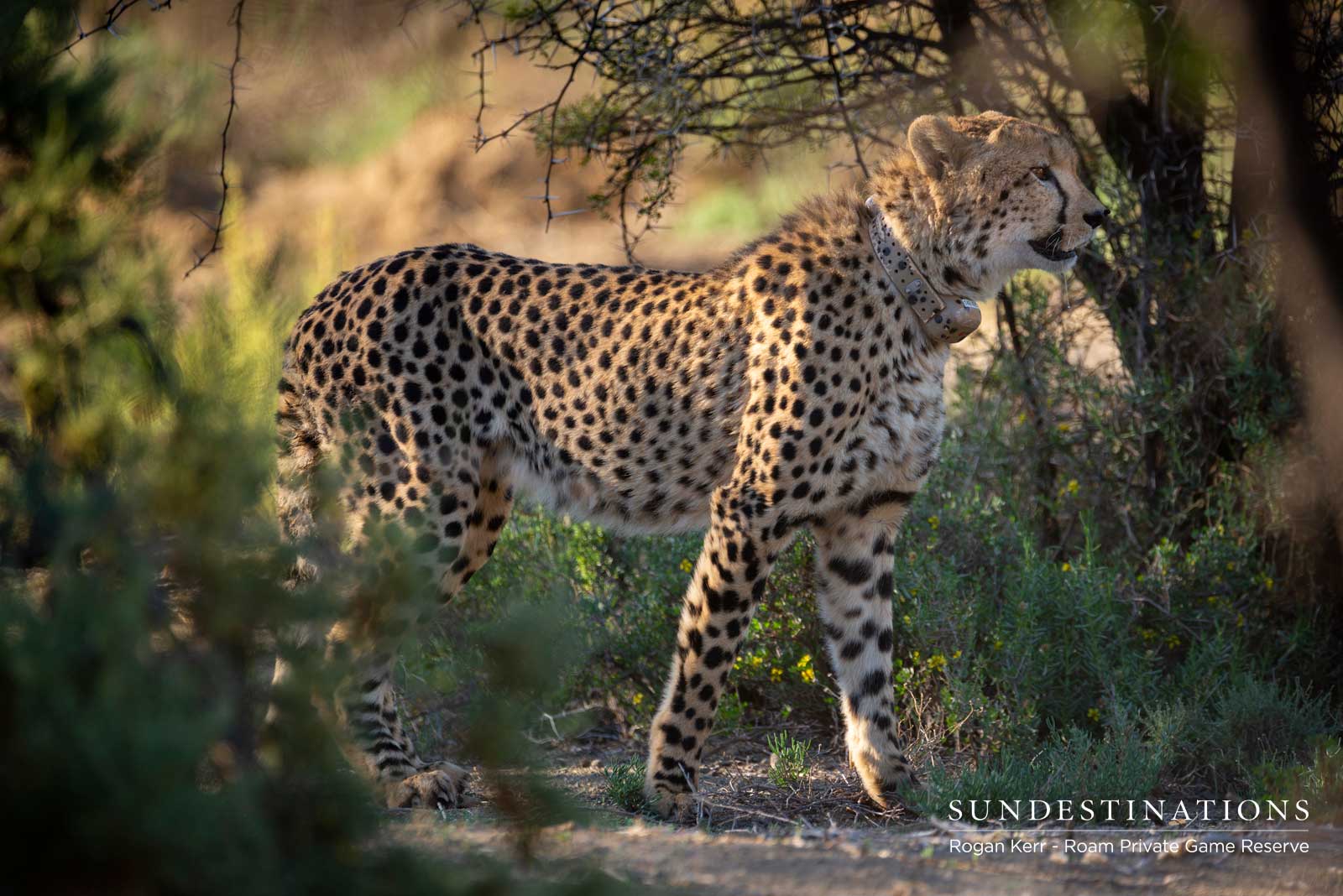 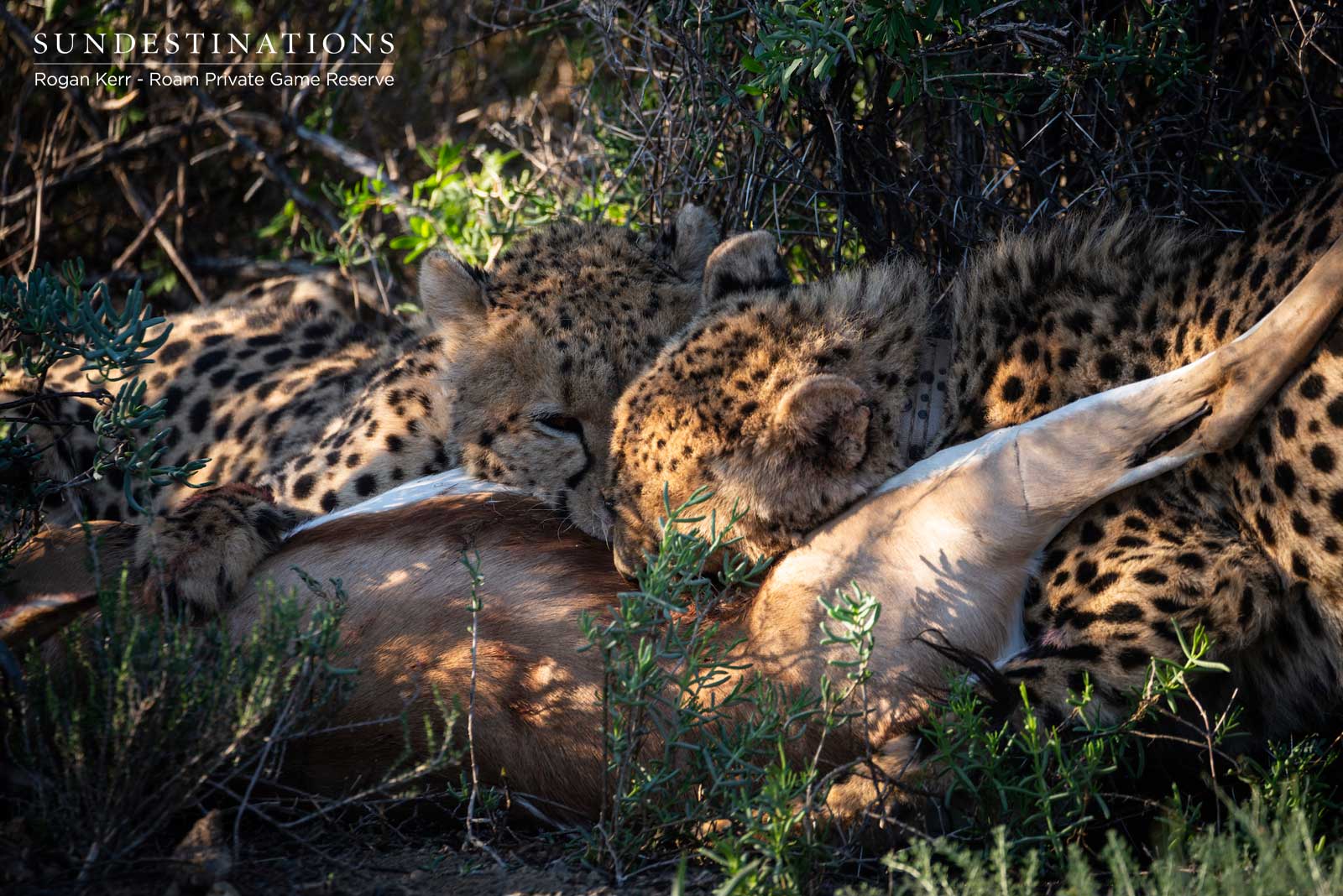 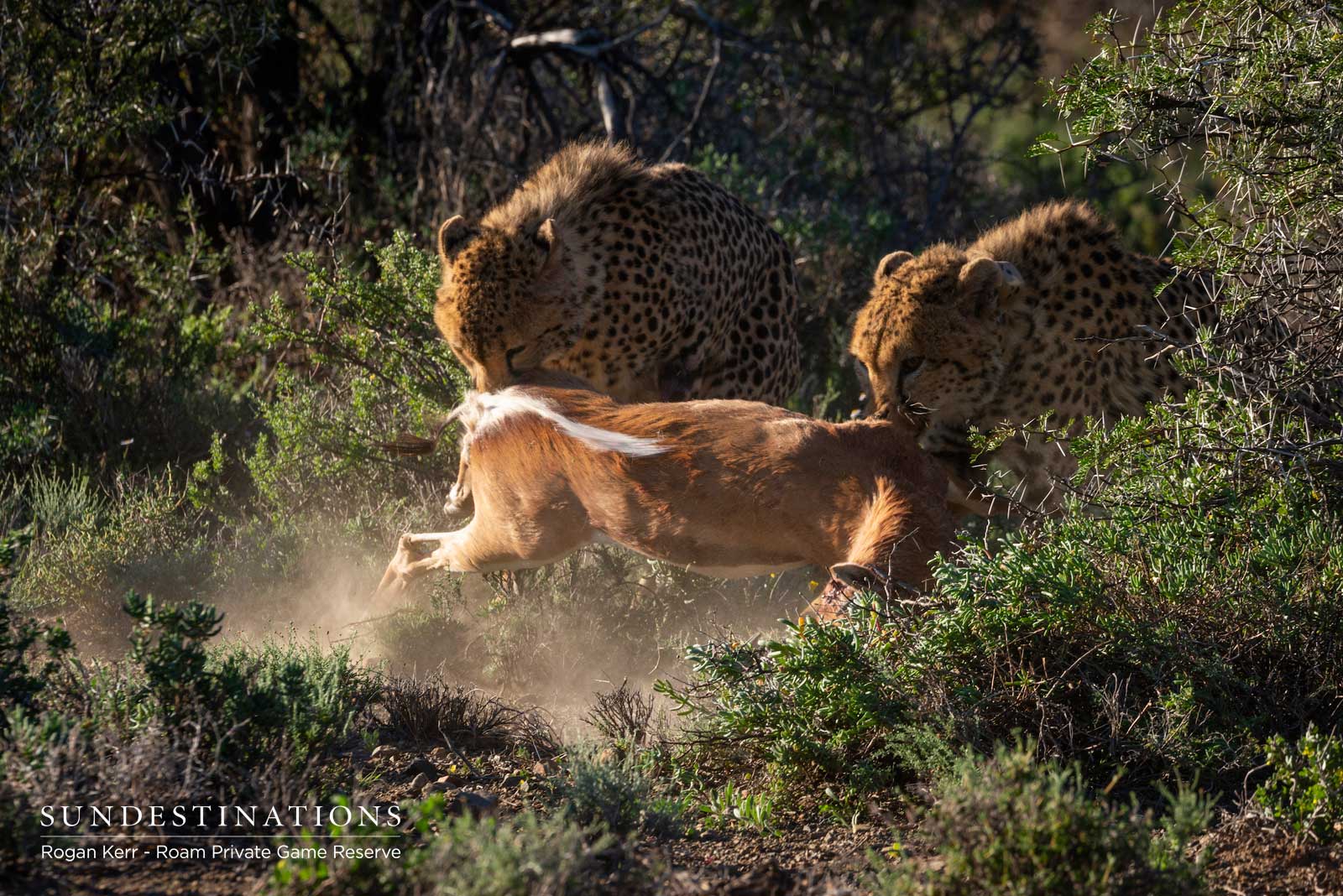 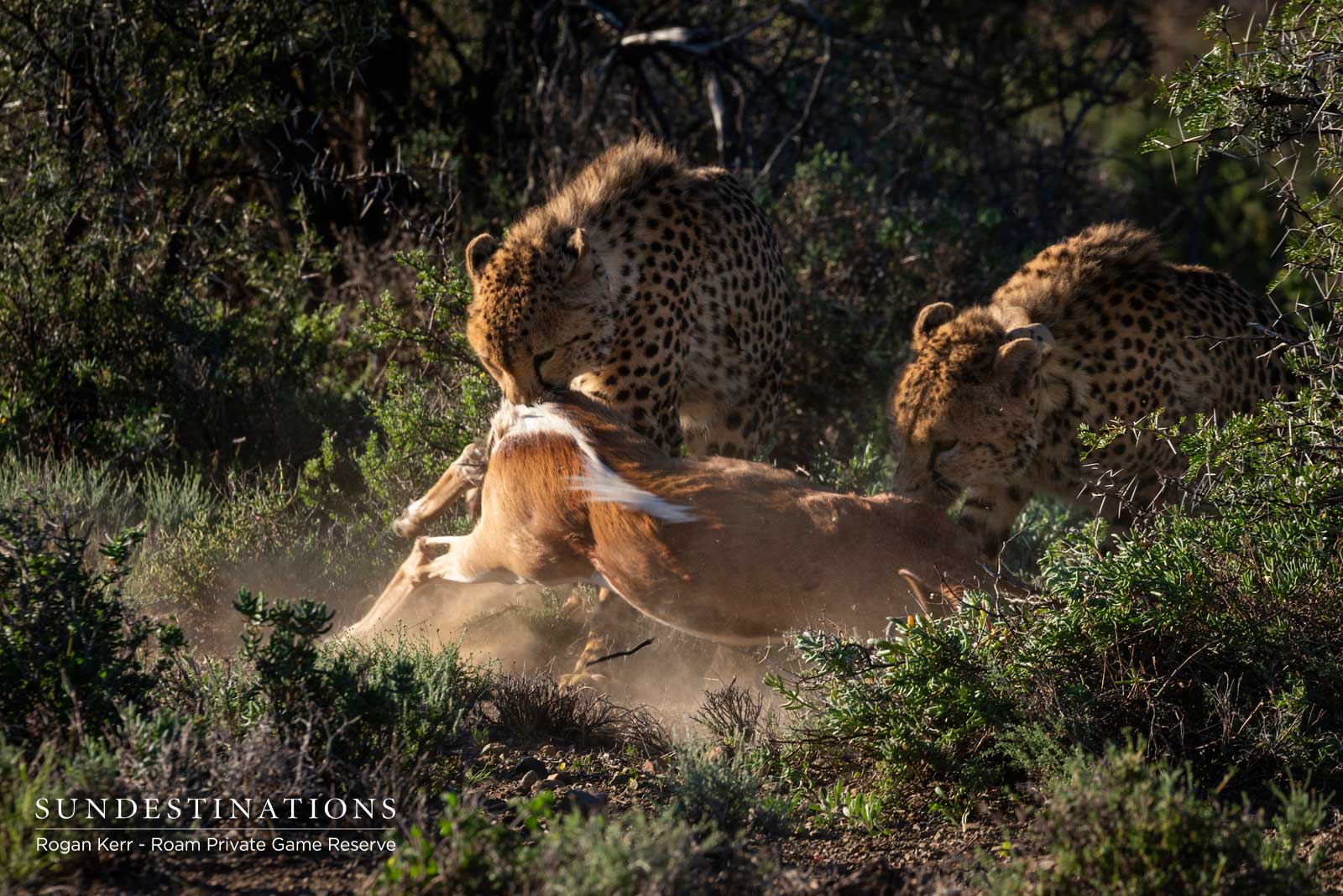 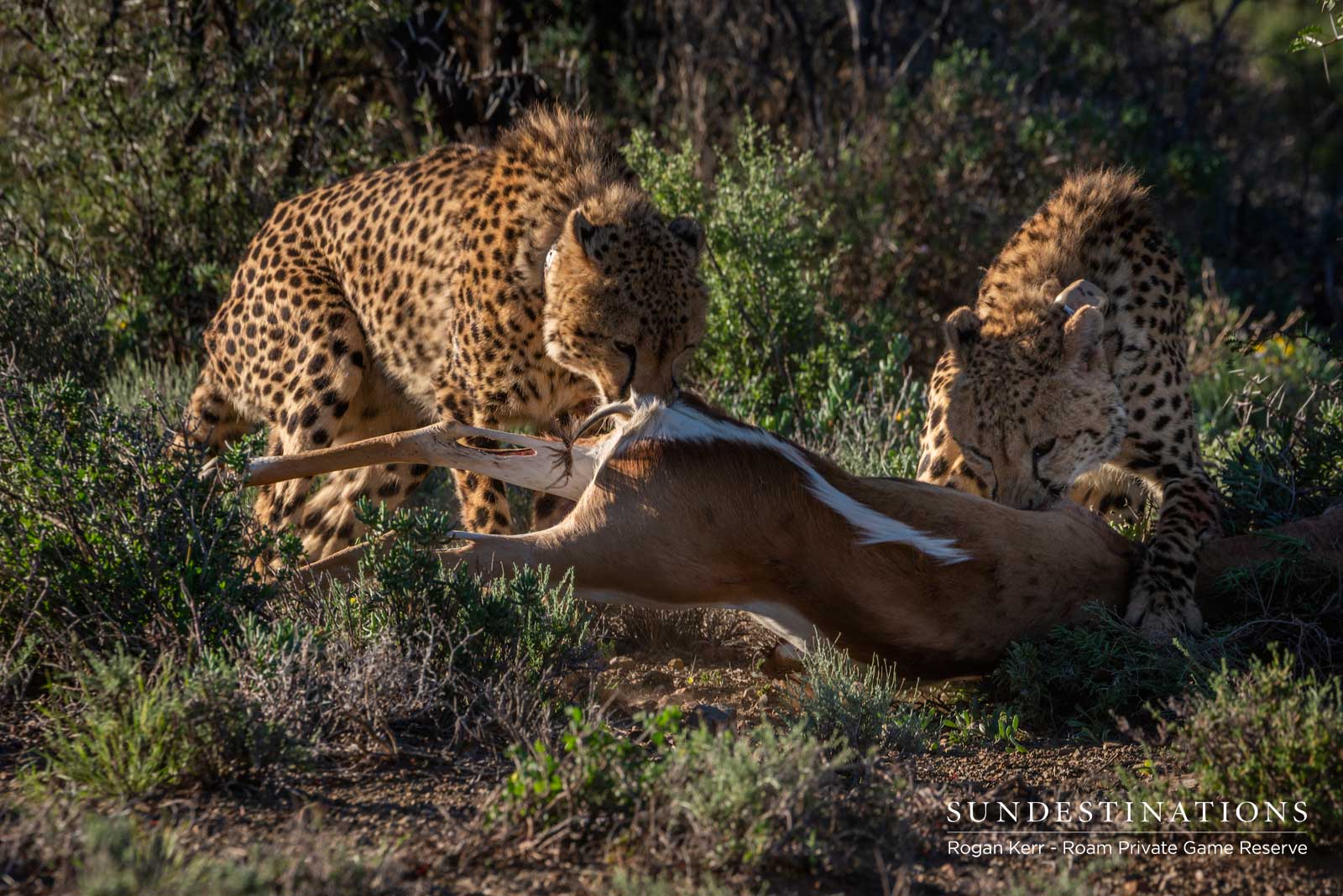 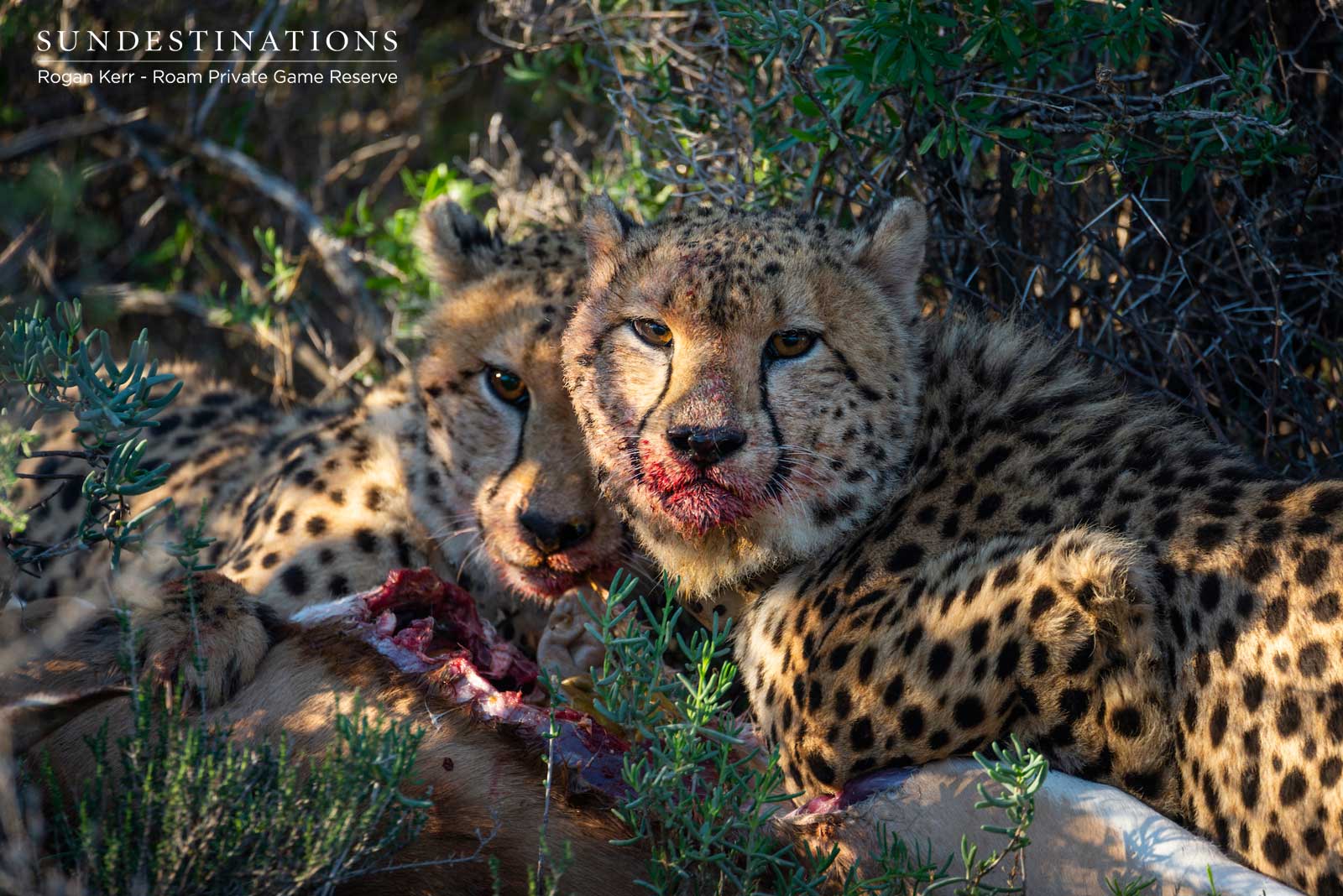