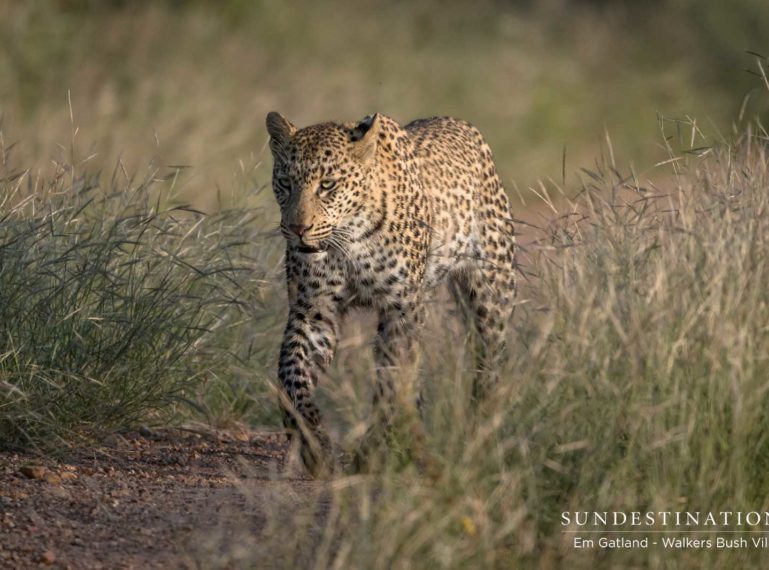 The slight and slender Sunset Dam leopardess moves with ease and grace through the low-lying shrubbery of the Timbavati Private Nature Reserve. The blackness of the night has been swallowed up by the eerie light of dawn, and there’s little doubt that she used the cover of darkness for pursuit of potential quarry. When the harsh first light of morning stabs through the typical mist covered dawn hours of the bushveld, the cool atmosphere together with its fractions of light, will soon be swallowed up by the penetrating sunlight. With the lightning fast change from dawn to day, it means that Sunset Dam won’t have much time left before the blinding sun blankets her being and forces her to seek shelter in order to conserve her energy. Using the last bit of cool air and emerging light, Sunset Dam moved through the landscape with intent – and it wasn’t to find a comfortable spot in a drainage line to sleep. Sunset Dam seemed to be highly focussed on following the scent of a male leopard!

Top-notch guide Brett Horley and renowned Kruger photographer Em Gatland were the lucky ones. While on drive with the exclusive Walkers Bush Villa, both Brett and Em witnessed Sunset Dam’s early morning antics, which included everything from failed hunting attempts to clumsy tree-smashing accidents and curious strolls around the game viewer.

Em Gatland said, “Sunset Dam was very active this morning. She was on such a mission but we managed to spend a good solid 30 minutes with her. It seems like she was sniffing out a male that had been scent marking trees and shrubs. She was intent on finding him ! While she was on the move she casually pounced on a scrub hare, but it was a failed attempt. She actually ended up smashing into a knobthorn tree which provided us with a couple of laughs. After all this, she then decided to chase a small francolin which led to nothing. Then the vocalising began. I’ve never heard such a deep, guttural rasping bark like that from such a small leopard. Her vocalisations were powerful. Shortly before crossing over into a neighbouring property, Sunset Dam cruised around the vehicle and was super chilled as she walked in front of us!”

When the midday heat crashes down on the landscape, leopards normally find a comfortable spot in the shade. These stocky rosette patterned cats expend plenty of energy when they engage in standard leopard activities that includes anything from hunting prey to patrolling turf and more. During the heat of the day they need to conserve their energy so that they are strong for the cooler parts of the day which are preferable for more energetic activities.

During the day you’ll spot leopards hiding out in drainage lines, find them lazing around in elevated positions on termite mounds, sunning themselves while straddling the forks of a tree and even resting on rocky outcrops. Sunset Dam, in this sighting, was exhibiting textbook leopard behaviour. She appeared playful and was clearly testing out her ability to conduct opportunistic explosive hunts while on the move at the sign of first light. This is why game drives start so early in the morning !

Sunset Dam leopardess is in the region of 3 years old which still makes her quite a young leopardess. She’s often spotted in the neighbouring Klaserie Private Reserve and on our traverse within the Timbavati. Leopards normally begin their solitary lifestyle at roughly 18 – 24 months, and even then they will hang around on the periphery of their mother’s territory. In the beginning stages of their newly solitary lifestyle a young leopard will often return to its mother to conduct hunts together. This Sunset Dam leopardess has only just entered into her into independent lifestyle and we hope to watch her flourish within this section of the Timbavati.

Stay tuned for more leopard and lion updates from the Timbavati. You’ll be seeing and hearing a lot more from leading guides at Walkers, videographer Rogan and photographer Em as they take on the Timbavati and document drives with the exclusive Walkers Bush Villa. 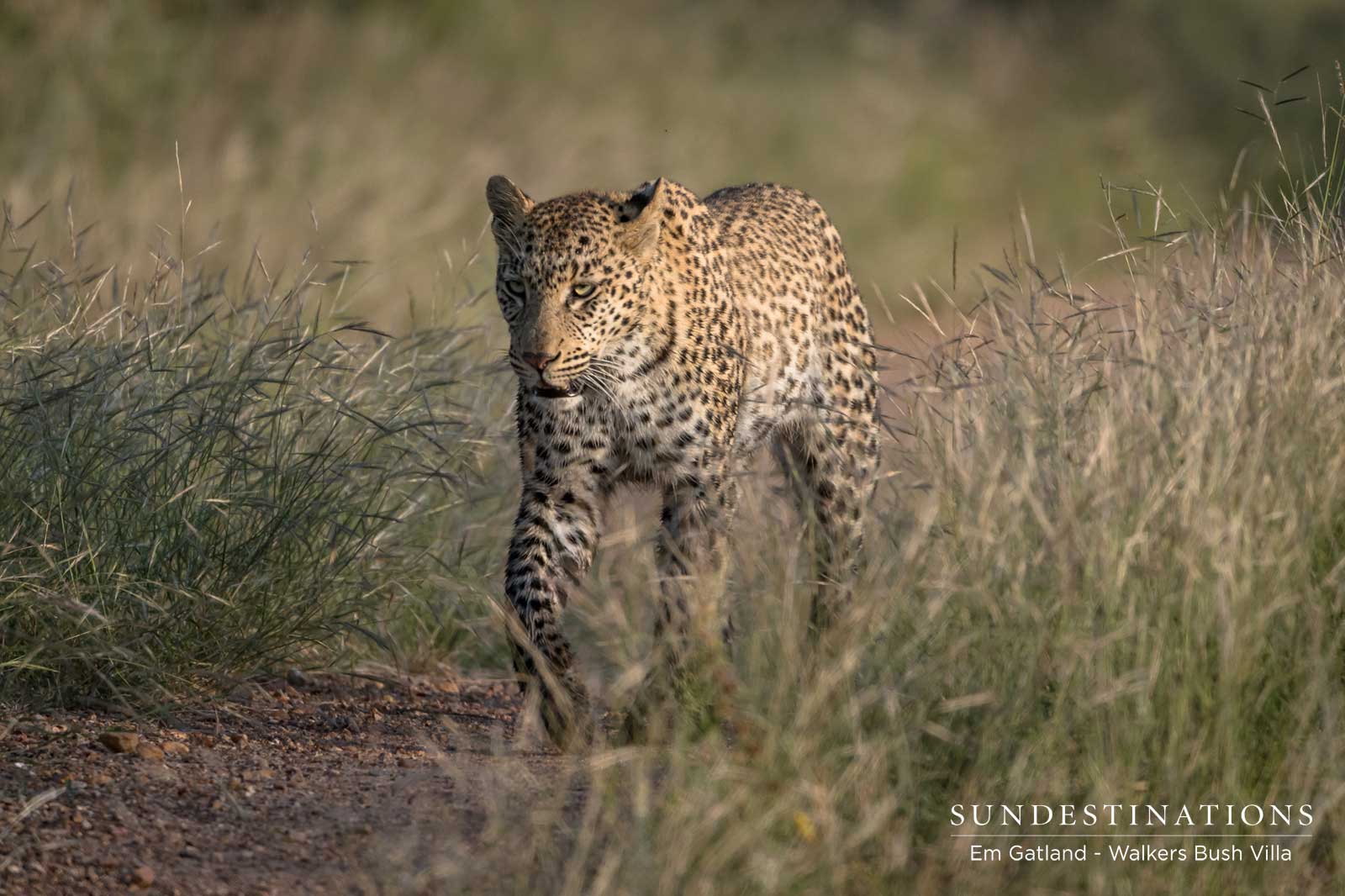 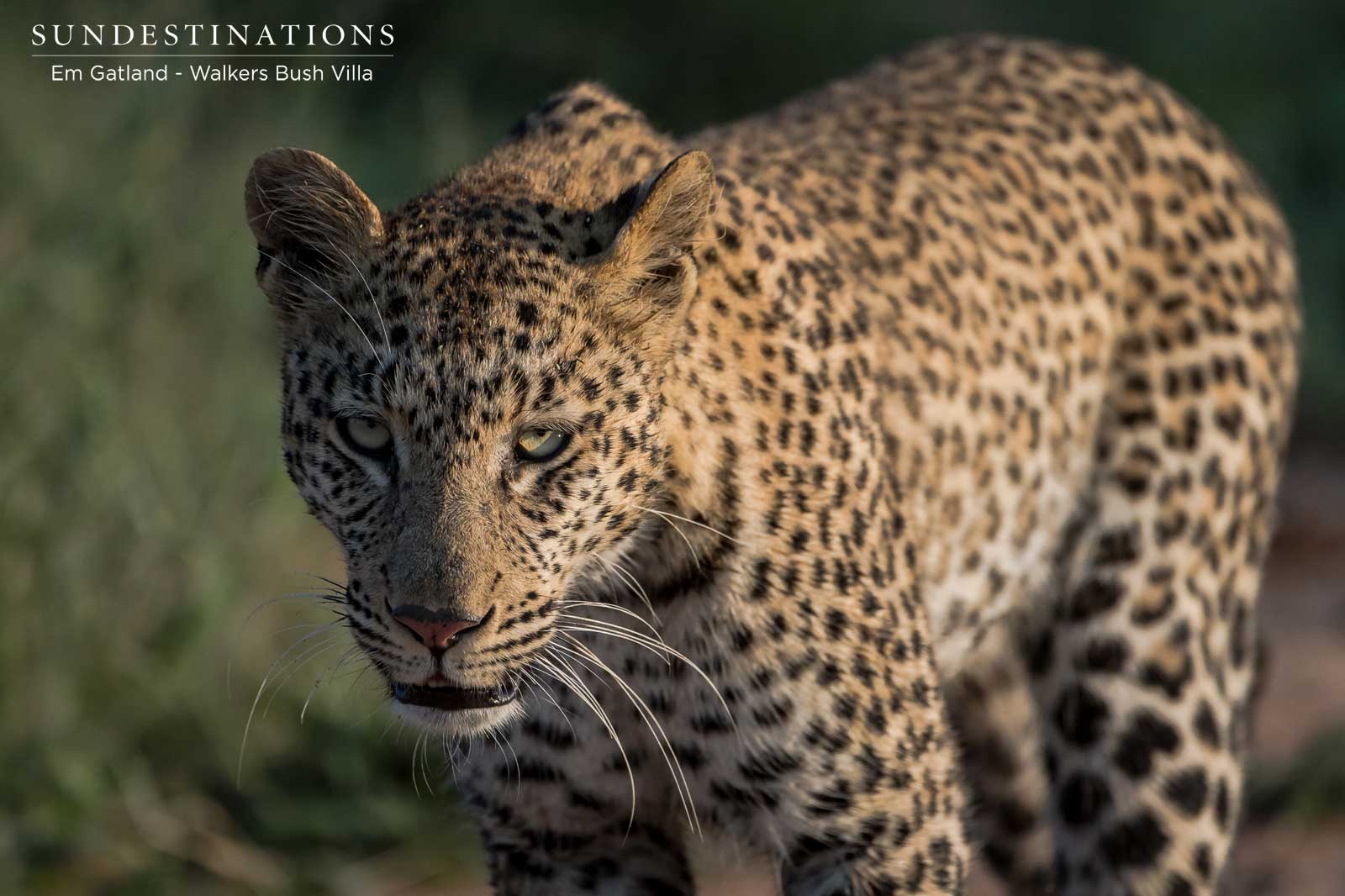 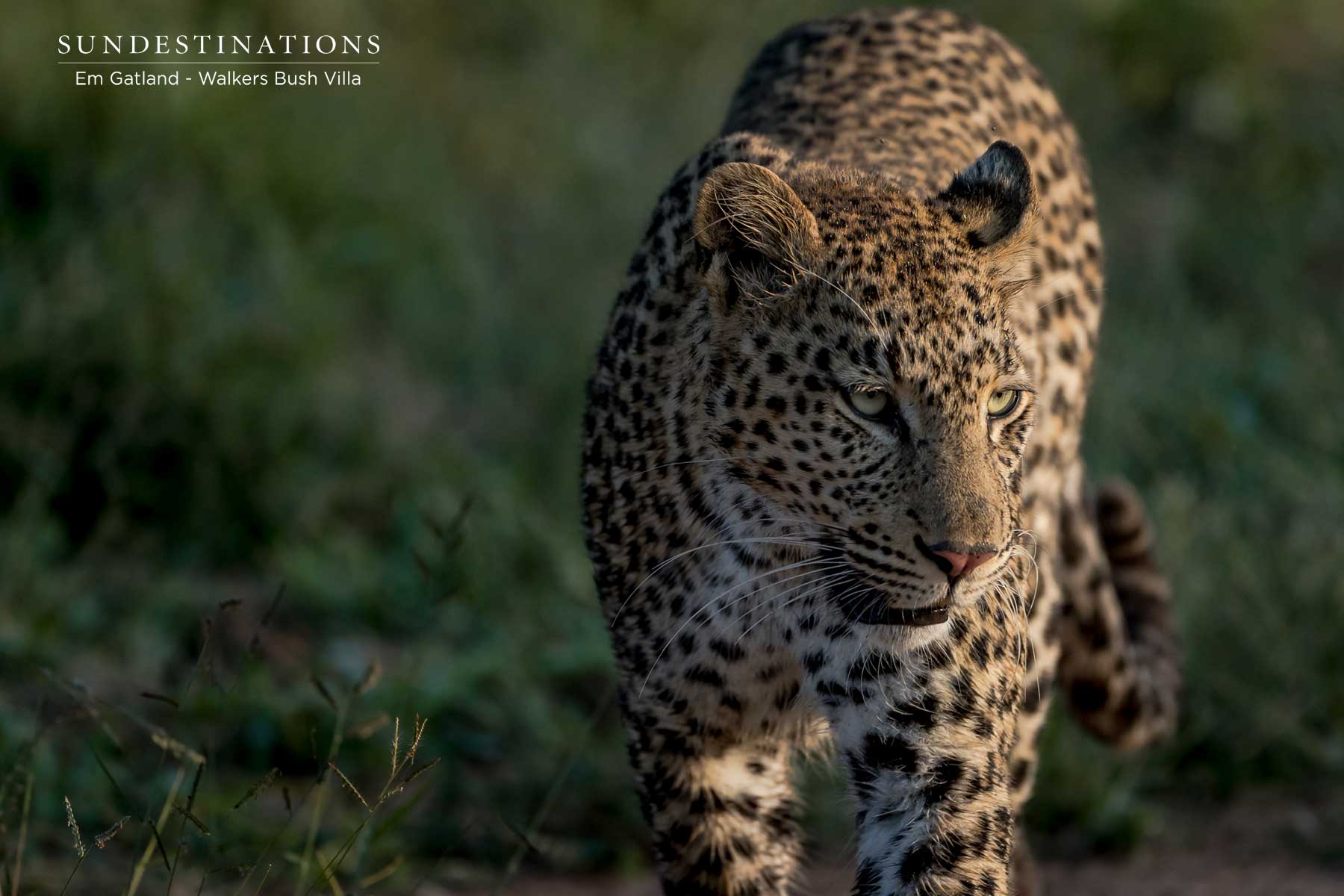 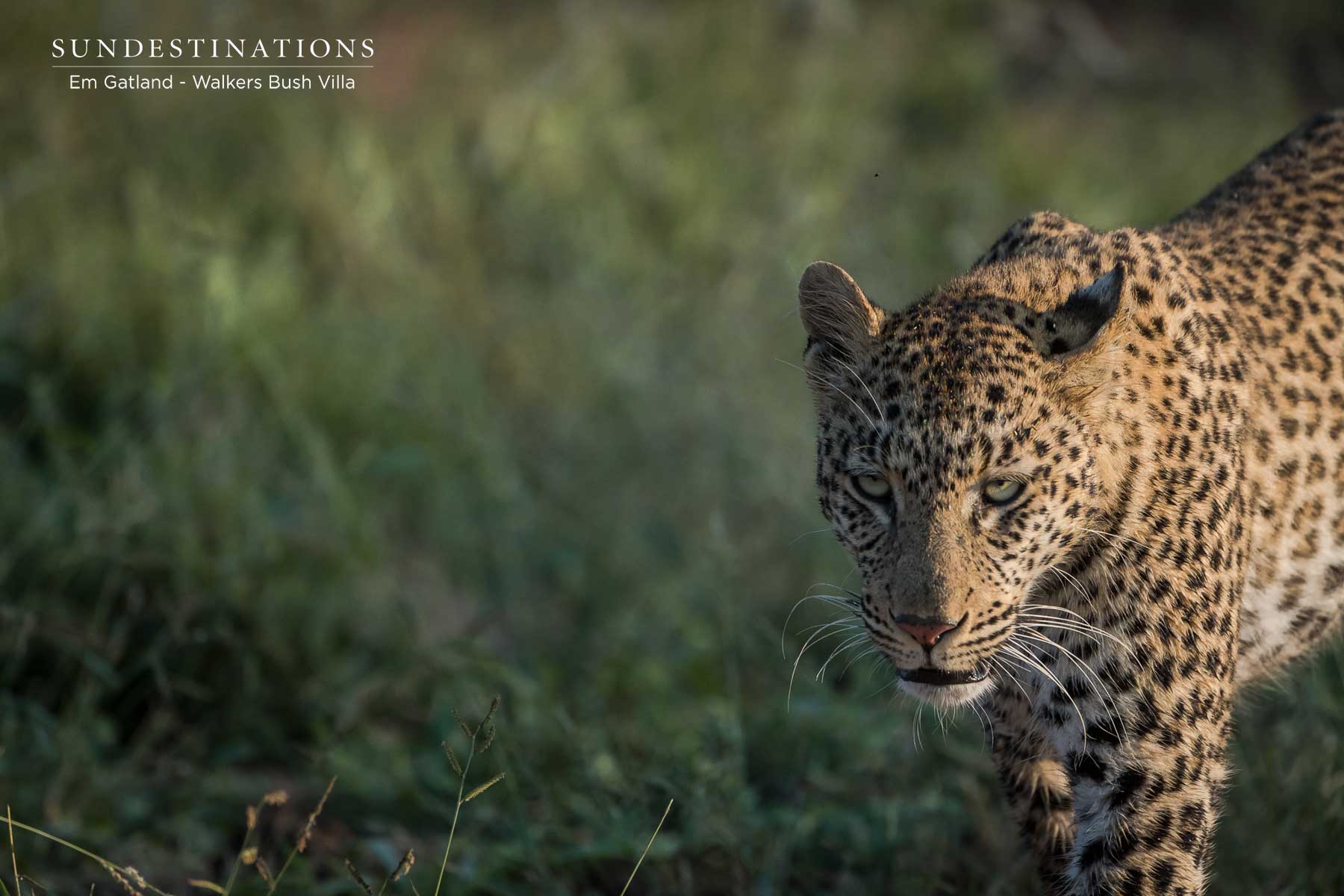 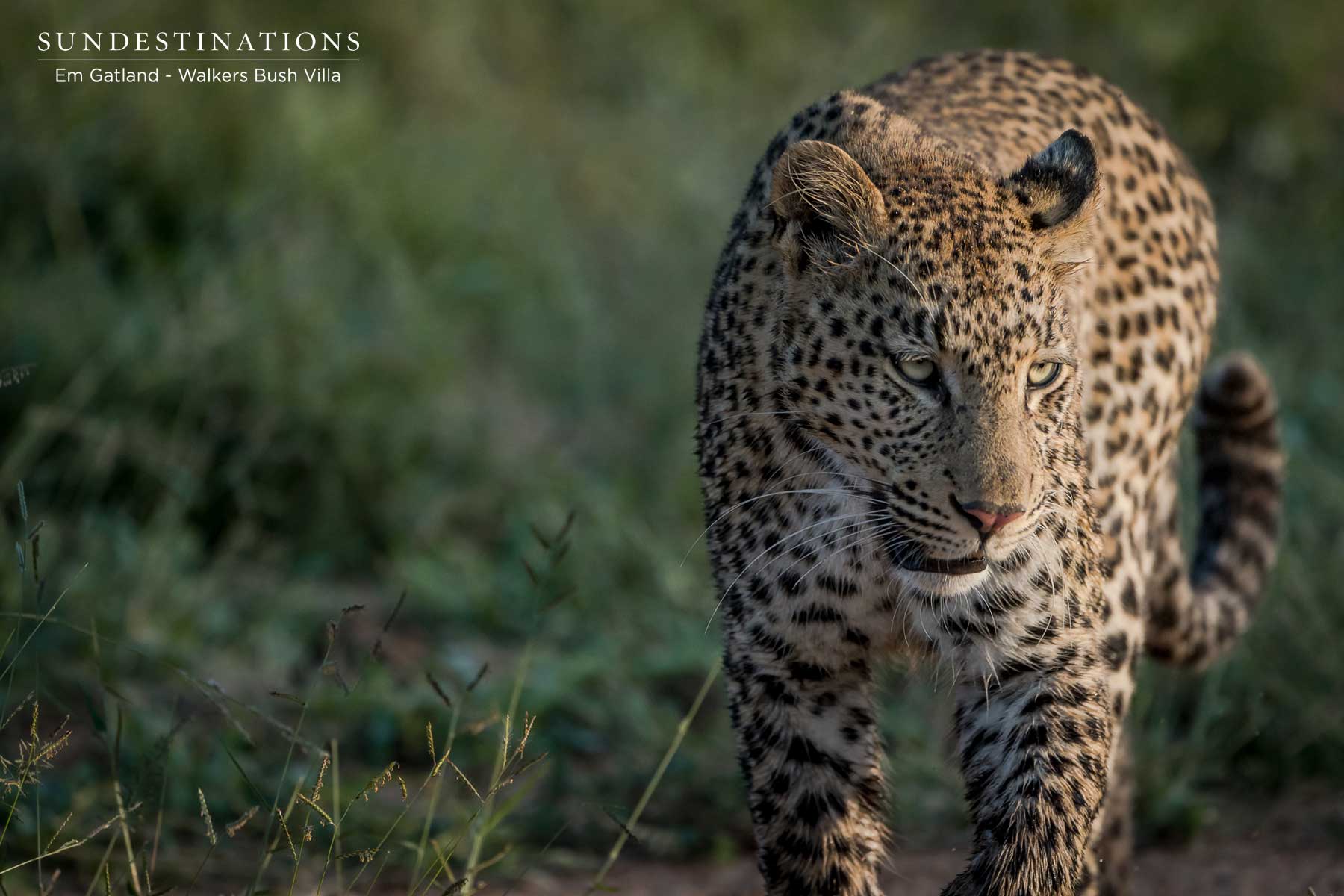 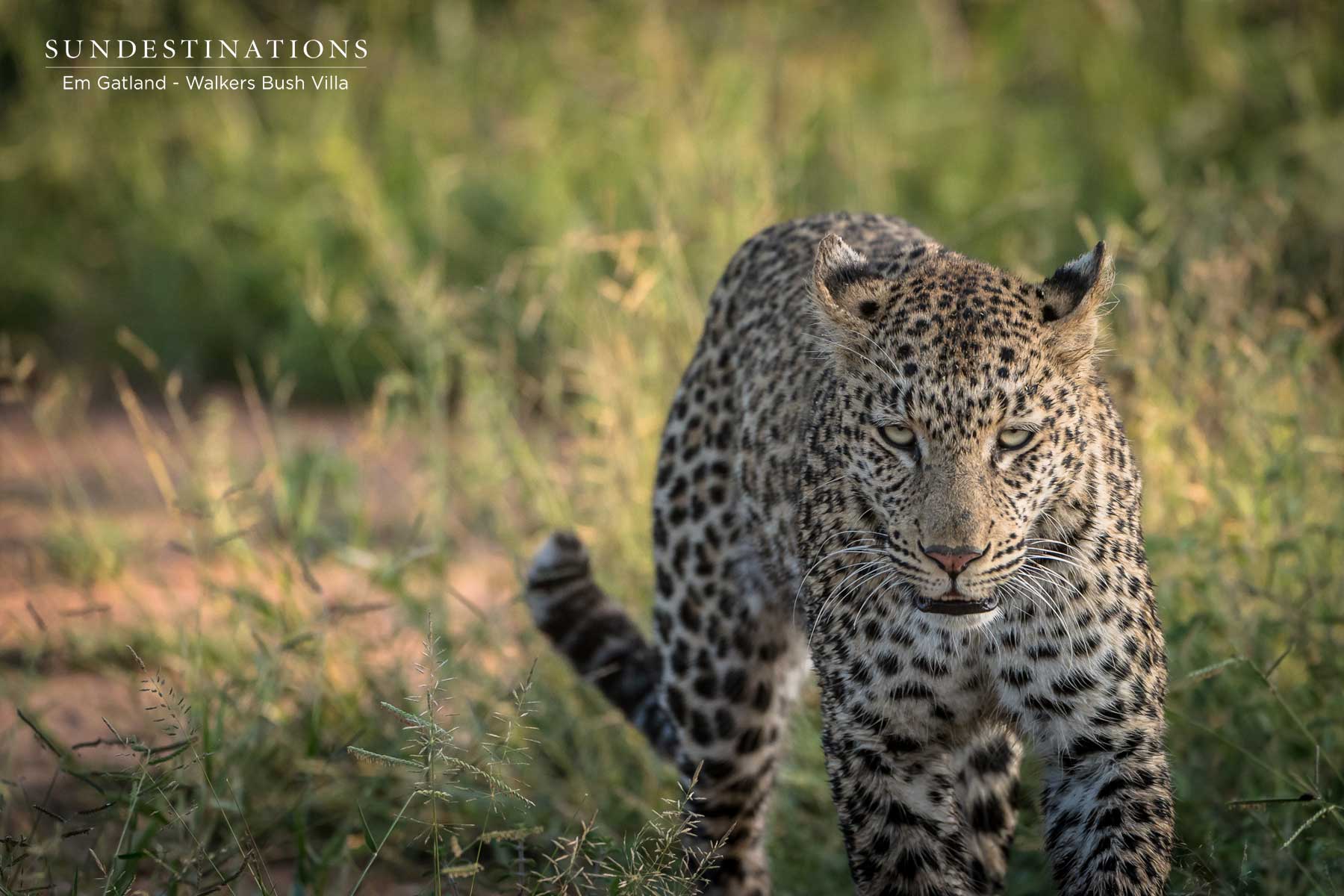 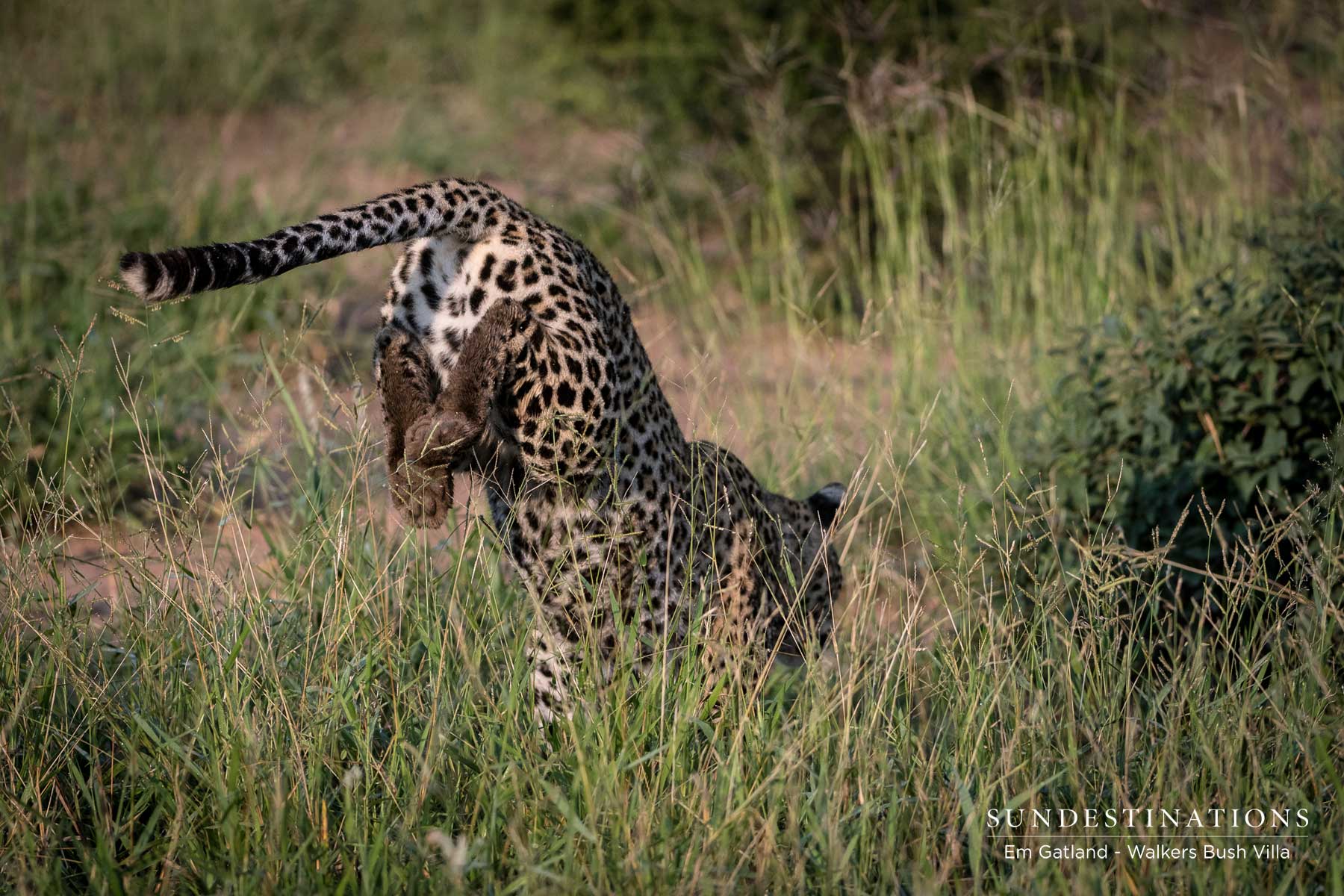 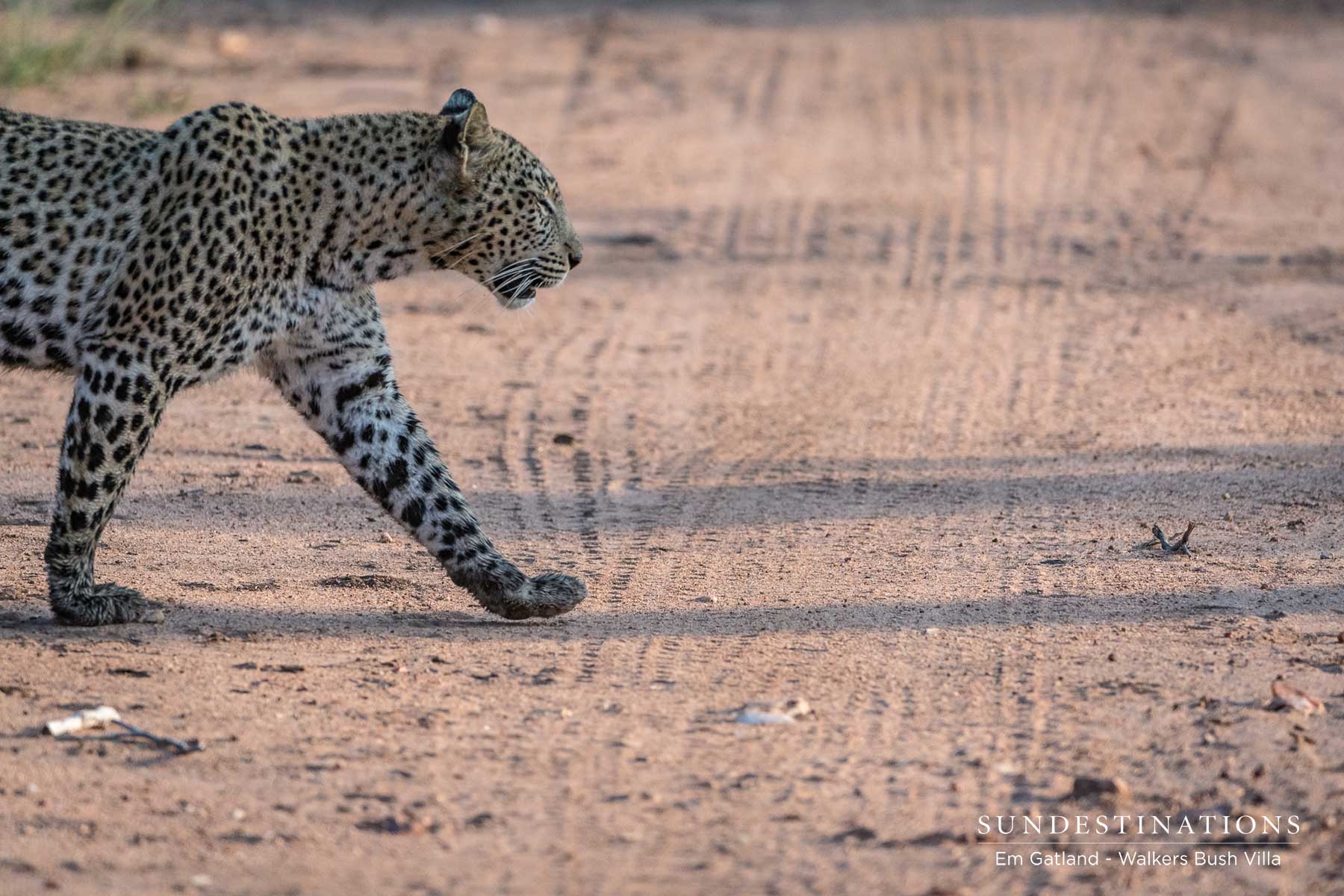 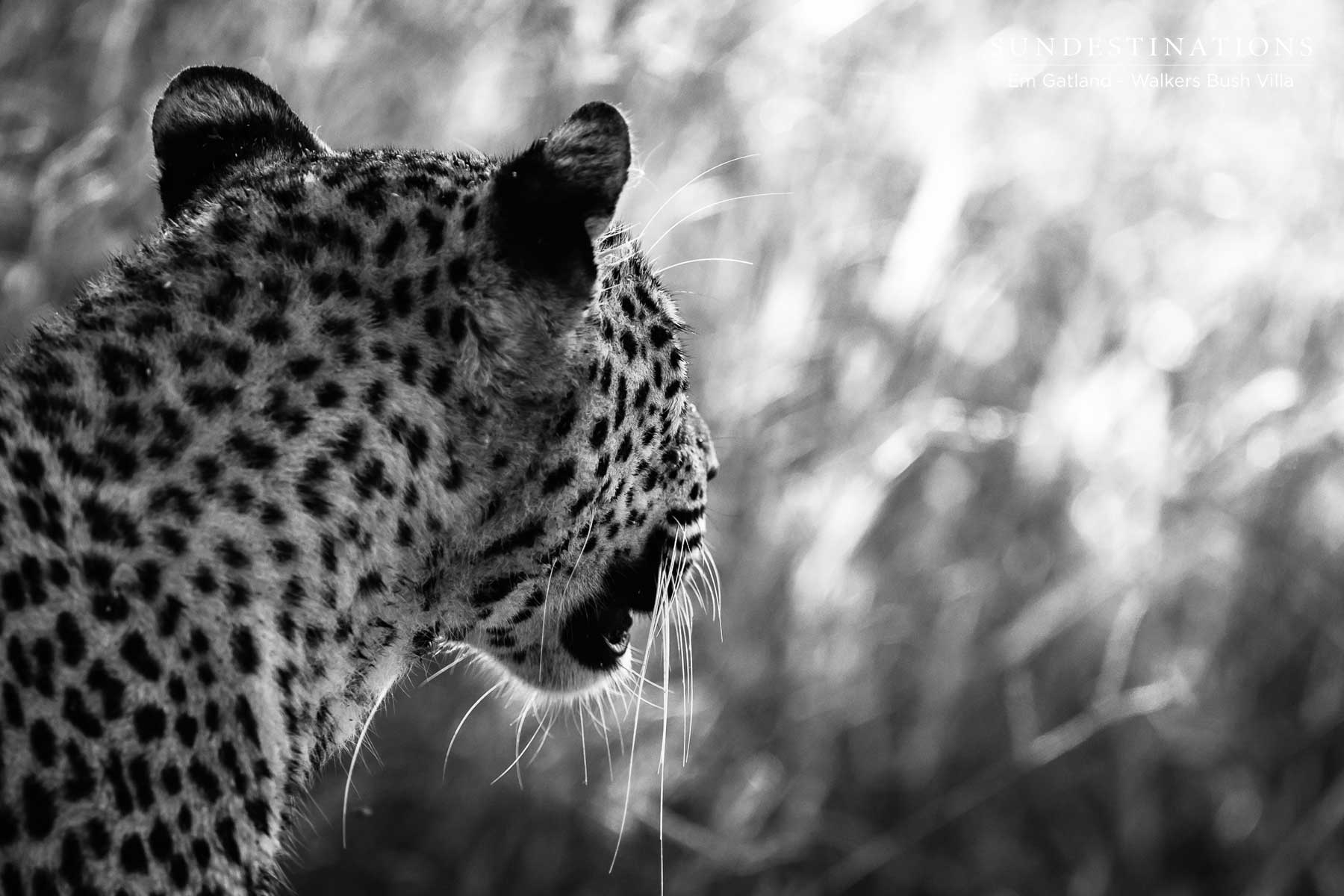 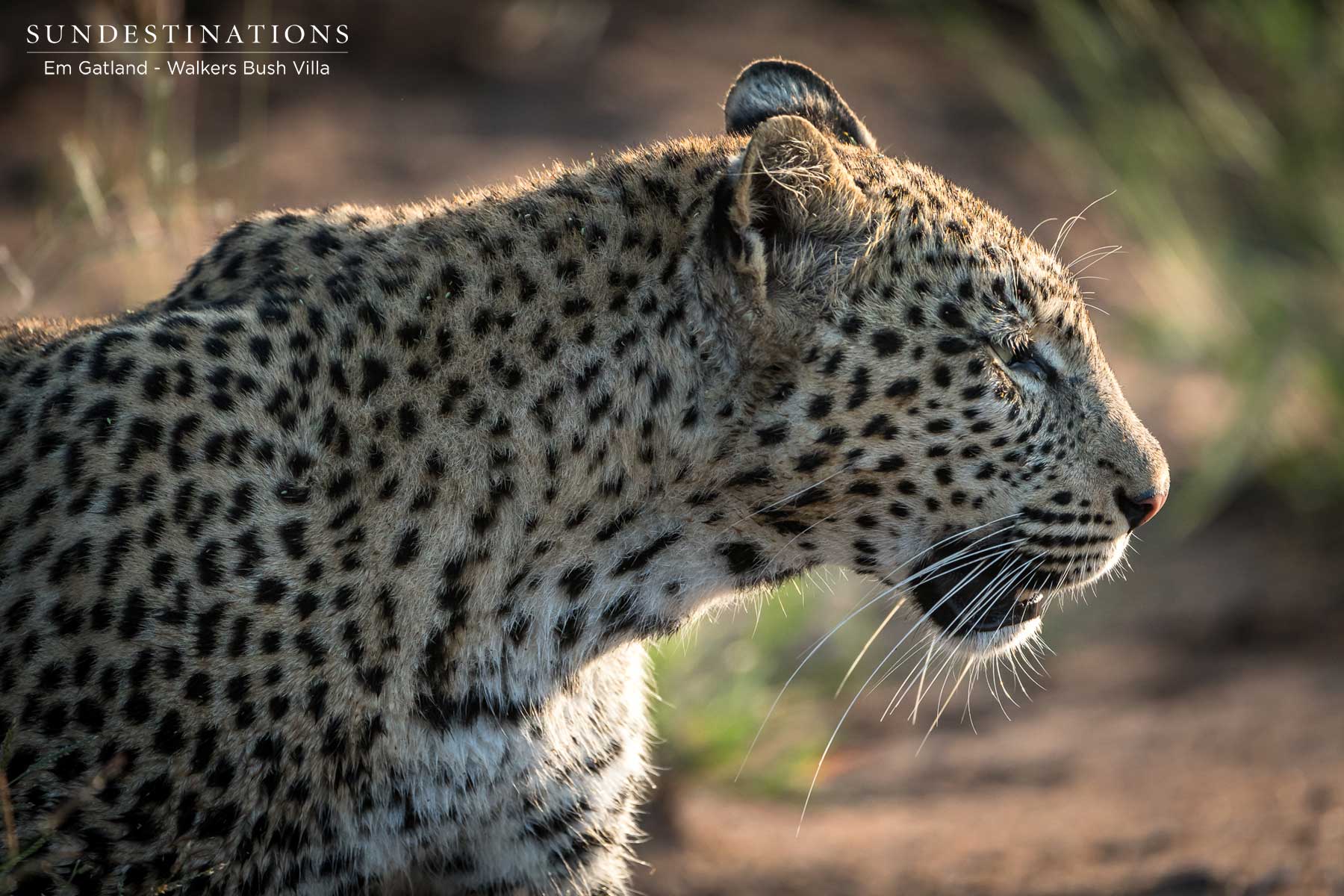 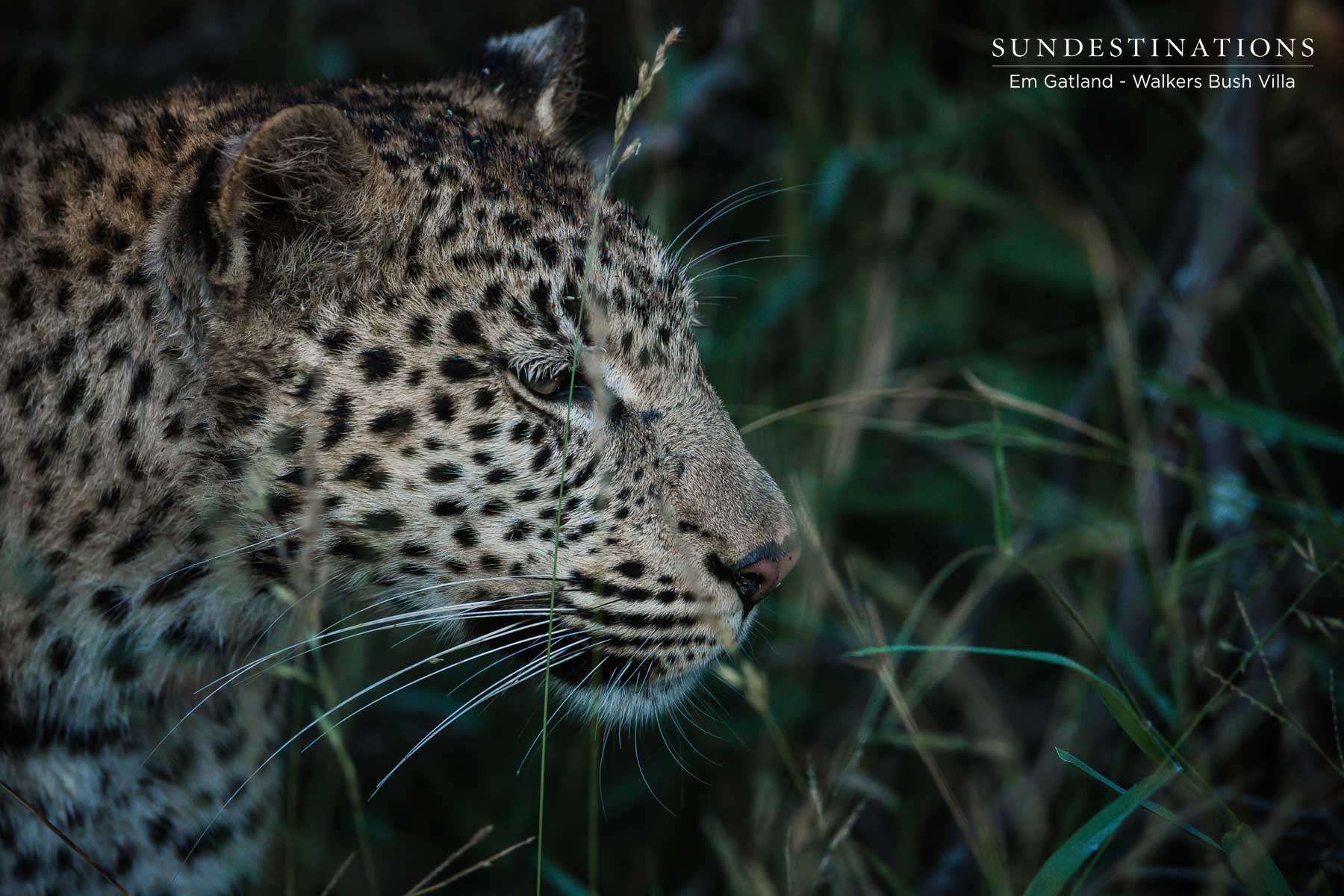 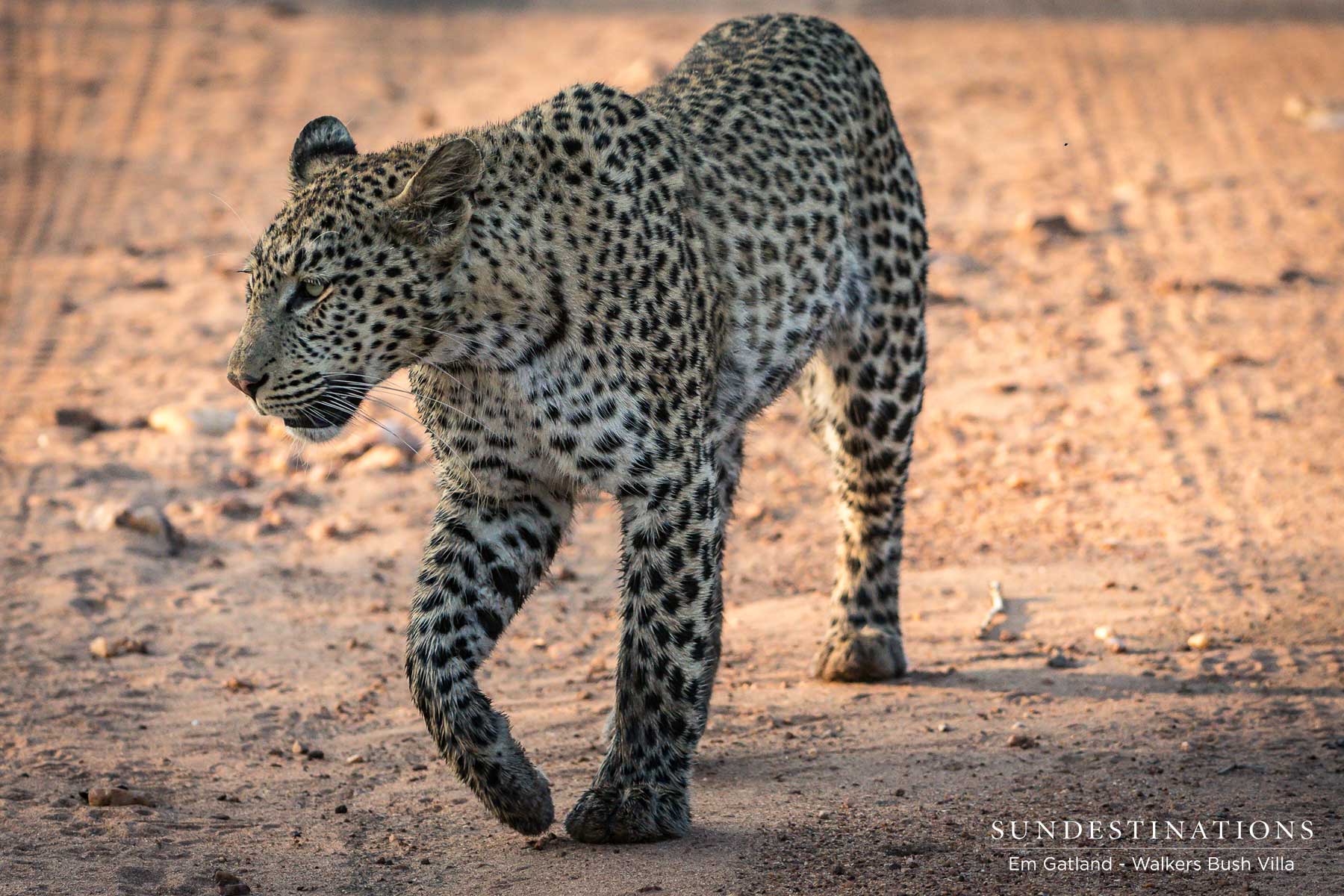 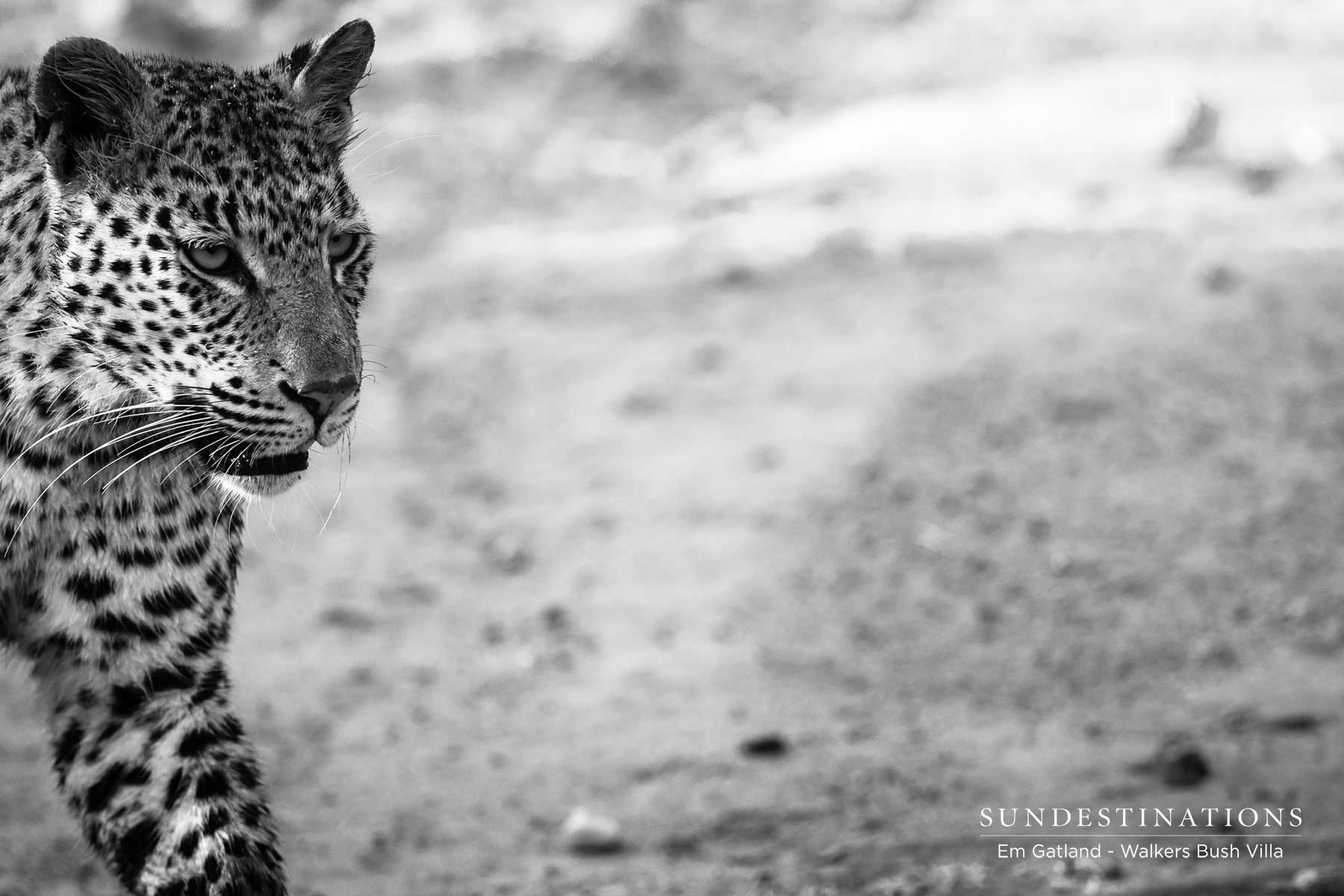 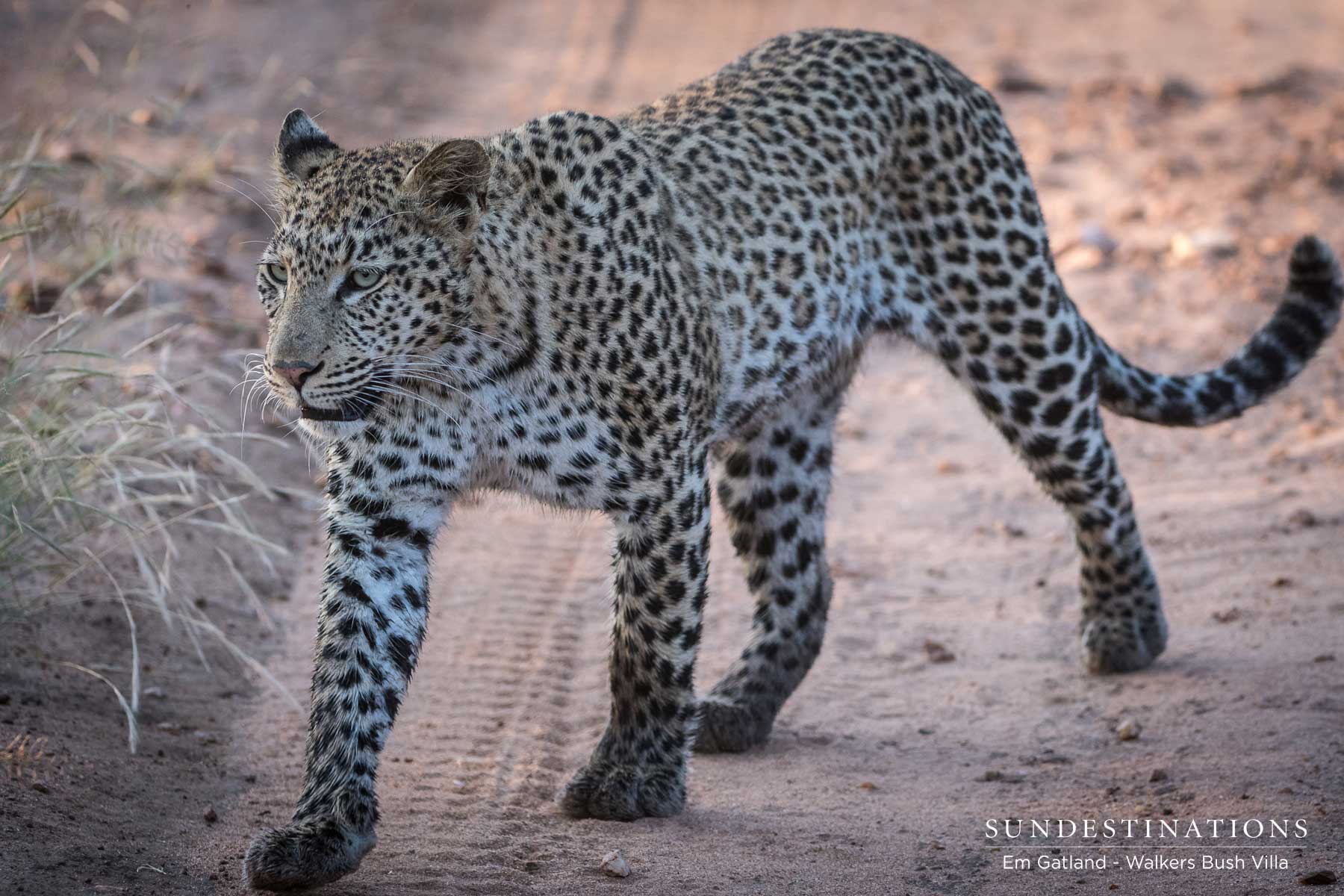 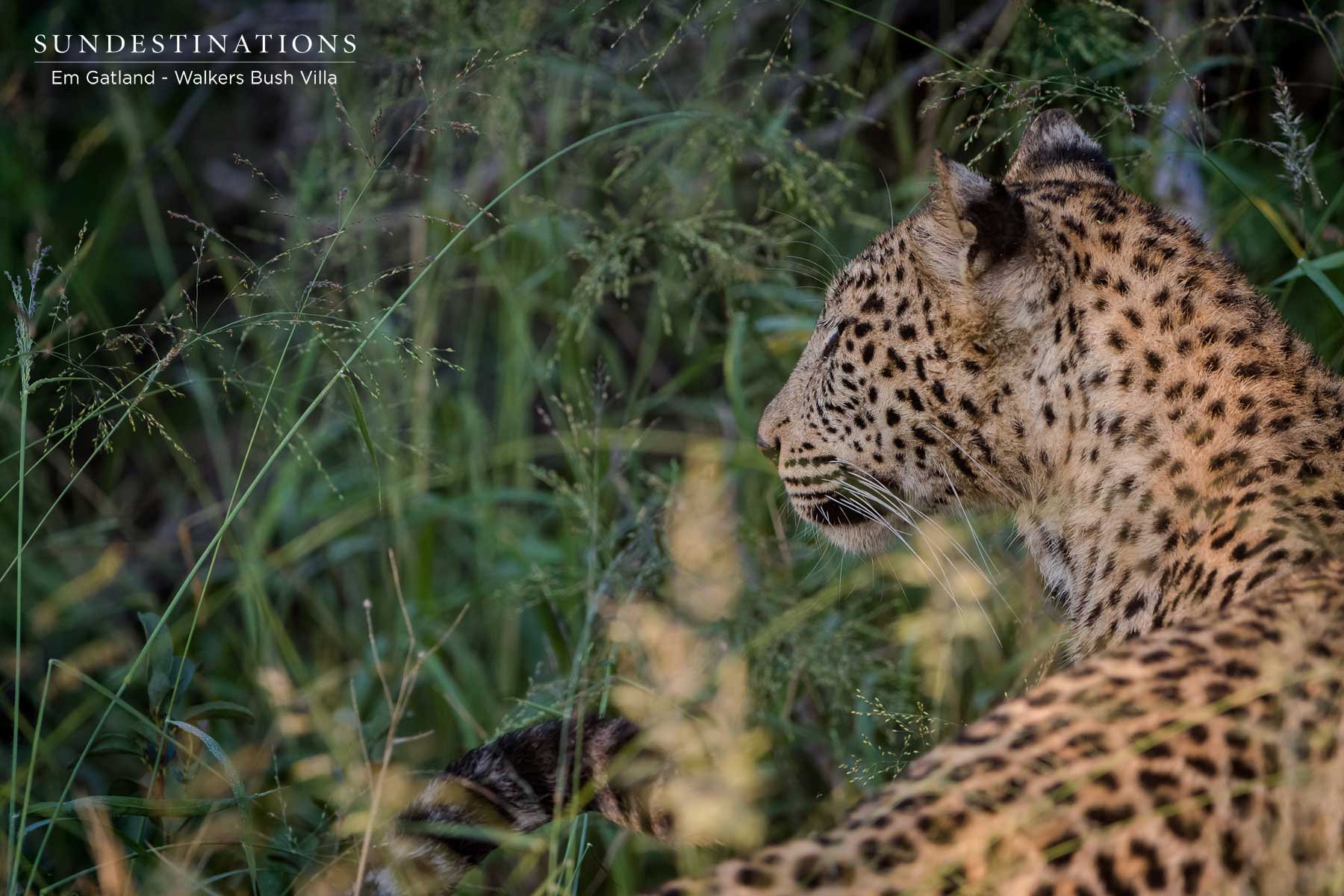 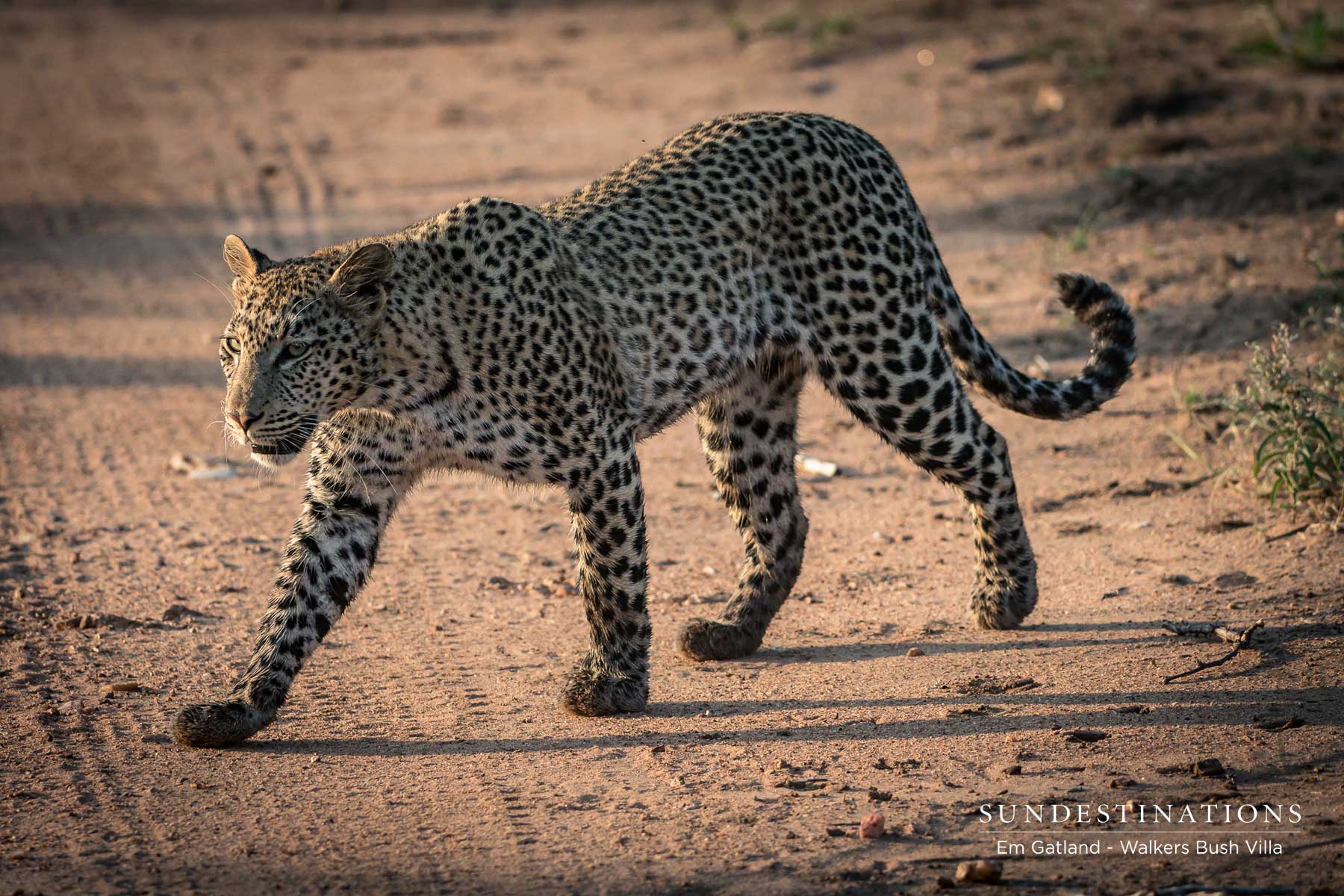 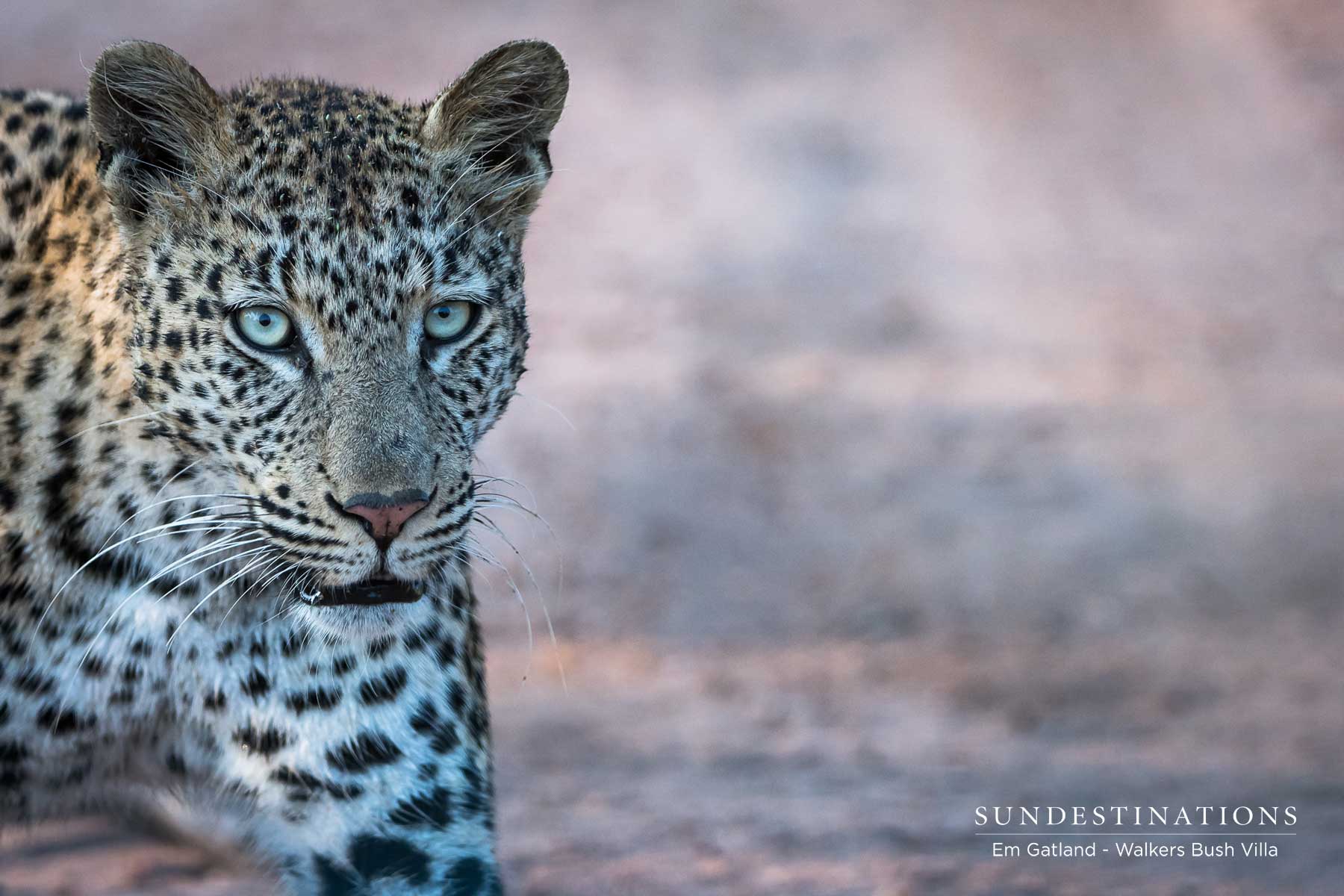