The Gorgeous Ground Hornbills of Klaserie 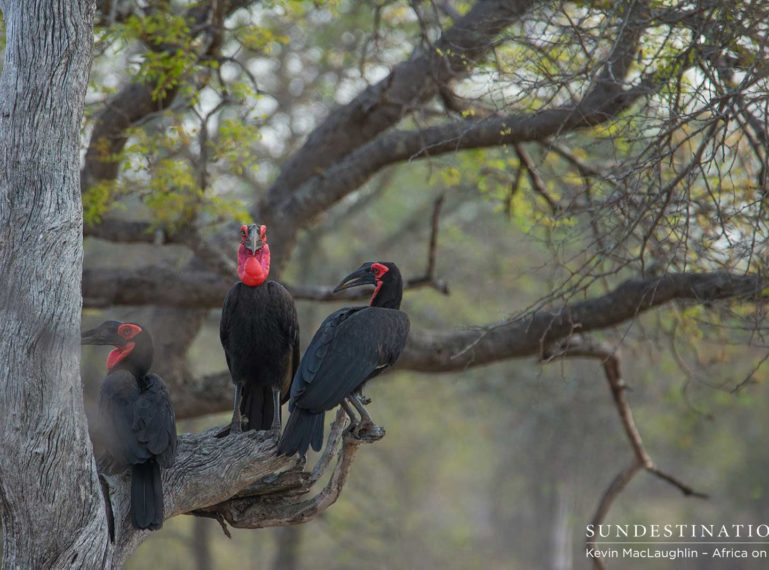 Some might consider it a face only a mother would love, but if you look a little more closely at the Southern ground hornbill, you’ll notice its luscious long eyelashes, mesmerising blue eyes, and the vibrancy of the bulging red skin on its face. This dinosaur-like bird is a relative of the yellow- and red-billed hornbill we see all over the reserve, so what makes this hornbill so different? Well, it’s listed as Vulnerable on the IUCN’s red list, and for good reason. There are only an estimated 3000 of these birds left in the wild, and they have a very slow reproductive cycle, making their future seem rather threatened. The Klaserie Private Nature Reserve, where Africa on Foot and nThambo Tree Camp are located is the home of a ground hornbill conservation project, where the Fitztitute’s Southern Ground-Hornbill Research Programme works hard to study the social aspect of these birds’ lives, and assist the wild birds with breeding effectively, so that they can maintain numbers. The programme has been at work for 16 years, building many artificial nests to help give these large cooperative breeders suitable places to nest. Even though these are ground hornbills, they nest in the cavities of large trees, and are sometimes seen flying up into the safety of high branches. Such large birds with glossy black feathers, tipped with white feathers, which are exposed in flight, the ground hornbills really are a spectacular sight. Africa on Foot guests got a fantastic look at a family of these birds recently as a couple of them flew up into the branches of a green marula tree! In the Klaserie, where assisted nesting takes place by the conservation-minded team of the ground hornbill project, we see more ground hornbills than, perhaps, elsewhere. South Africa is the home to about half of the total population of these birds in southern Africa – an honour and a responsibility. In aiding these birds’ nesting practices, the programme workers have studied the environment which enables the successful breeding of ground hornbills and replicated that in the form of artificial nests. What happens often in the wild is the breeding pair might produce two eggs, but only one chick survives, so under the strict conditions of the conservation project, researchers have managed to produce two chicks out of two eggs, and therefore doubling the reproductive rate of the breeding pair.

Being cooperative breeders, not every male and female bird will pair up and mate. In fact, there is only one breeding pair, and the rest of the birds in the group tend to be young males, which have stuck around since birth. The breeding female in the group only lays 1-2 eggs every 9 years during breeding season, making the successful birth and rearing of the chicks most imperative to the survival of the species. Unfortunately, as environments change over long periods of time, there might not be the same amount of large, thick-trunk trees around, offering suitable nesting spaces for these birds. They have not been known to adapt easily to the changing surroundings in finding a ‘replacement’ nesting spot, so the chances of breeding successfully become slim.

These fascinating ground birds are strict carnivores, and are frequently seen eating snakes (even the venomous ones!). When we come across ground hornbills on safari, we find them foraging on the ground where they use their large beaks to attack reptiles like snakes and lizards, or perhaps mice, birds, or tortoises. In Xitsonga, the local language in this area of Limpopo, a ground hornbill is called ‘nghututu’, which refers to the deep repetitive bass beat of its call. It is an all-round fascinating bird, and we are honoured to be able to show our guests this prehistoric-looking creature to add to their safari experience!