The Week in Pictures: A Photography Round Up 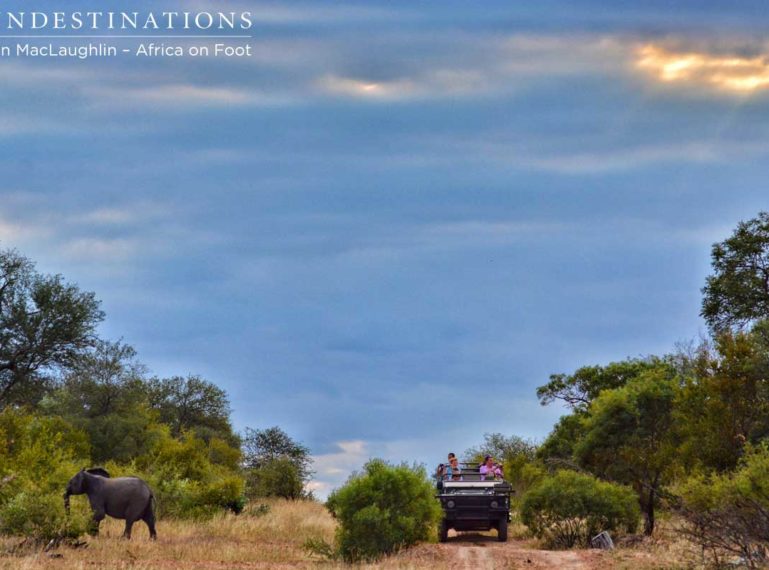 Goings on at the camp are as exciting as ever and it seems that every major predator has come out to play. During our #livebushfeed edition on Wednesday, we were getting live reports from the rangers at Africa on Foot that the Trilogy Lions – a mean coalition of 3 males – was stalking and hunting buffalo. The guests were only 10m away in the game viewer listening to the panicked sounds of the buffalo as they dodged the charging lions 3 times! If this sort of thing excites you, then tune in next Wednesday between 4 and 7pm on Twitter and Instagram to catch the live action. This is not the only hunt to have taken place in the Klaserie over the last week, as Courteney and Cecilia Blunden set out on night drive, only to come across a male leopard and his freshly killed kudu calf. As Cecilia snapped away, Courteney observed that the leopard failed to pull his prize up a tree, and sure enough, it was snatched up by a scavenging hyena! Up at nDzuti Safari Camp, a big male lion was seen mating with a young lioness from the River Pride – an episode that was also captured on Wednesday’s #livebushfeed and filmed by Bruce Meeser (yet another reason not to miss out!) Down south in the Sabi Sand Wildtuin, Umkumbe Safari Lodge ranger, Cameron, captured some fantastic images of the epic African wild dog sighting their guests enjoyed; plus, territorial male leopard, Maxabeni, was seen in all his glory. (Get to know Maxabeni and learn how to identify him here). Also at Umkumbe, another one of Africa’s rarest predators was seen – a cheetah, looking pretty relaxed, posed for pictures during a very special game drive. Africa on Foot and nThambo Tree Camp are hosting superb wildlife photographers and filmmakers, Shannon and Russell – aka Shannon Wild and Russ Wildlife (check them out on Instagram where they are sharing all their wonderful photos at the camps). They are joining Photographer, Kevin MacLaughlin, in the field and have been there to capture some of the beautiful moments our guests have enjoyed this week on safari. Enjoy! In Botswana, where the concept of safari becomes something more wild and unadulterated than you can imagine, Camp Savuti and Camp Linyanti put up a show not to be missed. In Chobe’s Linyanti region, the silence of bird watching on the swamps can turn to the excitement of a leopard kill in the blink of an eye, while the Savuti is where visitors head to see the famous lions that are practised elephant hunters. Take a look at some of the highlights…