Top Safari Sightings at Africa on Foot and nThambo 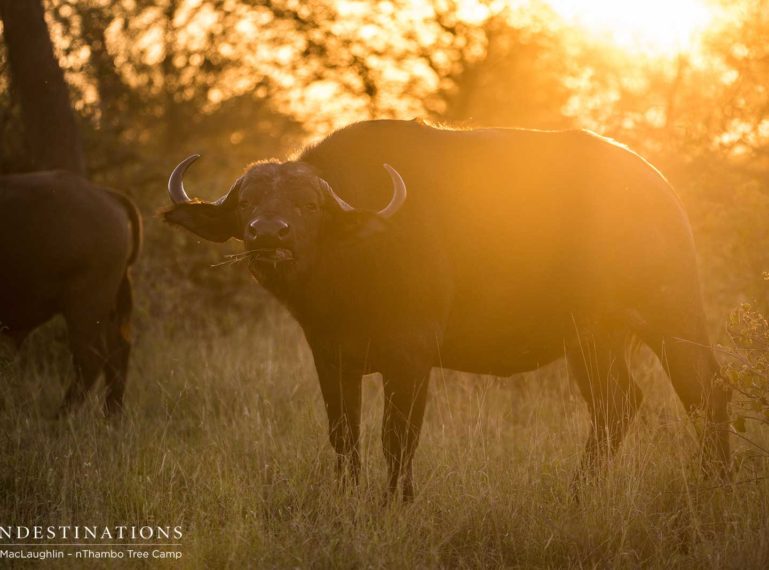 We are in the quarter-year holiday phase (already!) and it looks like the bush is in as high spirits as we are about it. The long Easter weekend produced some serious excitement, and game drives at nThambo Tree Camp and Africa on Foot were filled with mud-loving elephants, sneaking leopards, sister lionesses, sunlit buffalo herds, and mating rhinos – and that is only to name the Big 5! Among other phenomenal wildlife sightings are zebra, giraffe, baboons, birds of all sorts, hyenas, and those extraordinary African wild dogs. Everywhere we look, we are astonished by nature’s bounty, lapping it up as quickly as we can before we wake up and realise it was all a dream… Perhaps the most prominent and frequent sightings over the last week have come from the rarest and most endangered of the carnivores. The wild dogs have been spotted both at sleep and at play, clearly quite settled in the area, indicating that they could have a den nearby. This is the time of year during which the pack settles down for the alpha female to give birth to a litter of pups in the safety of an old termite mound that has been burrowed out by the likes of an aardvark. The whole pack works to take care of the newborns and ensure that they grow into good, strong pups, and are able to follow the pack as they resume their nomadic lifestyle after 3 months at the den. Incredible animals we are privileged to be able to sit and watch at close proximity as they live out their wild lives. The old Ross Breakaway sisters have kept a low profile lately, with the Hercules Pride growing and gaining strength in the area, but over the last couple of days we spotted the pair of them hanging out together. We’ve had such great experiences with the pair of them over the years and it is always fantastic to catch them in the neighbourhood, as relaxed and unfazed in our presence as always. Leopards! Where do we start? Some of the prominent characters starring in our recent safaris are Cleo – elegant and sophisticated cat we have been watching for years; Ross Dam – mother of cubs and a real beauty of the bush; Bundu – Ross Dam’s handsome male cub who is still in his mother’s vicinity, but practicing being independent; and an unknown male leopard we suspect might be mating with Cleo! The excitement doesn’t end when it comes to these sleek cats. A couple of days ago, Greg found an unknown male dragging a carcass for about 1km through the bush, and soon discovered Cleo was trailing him, clearly not interested in losing sight of the feast. Either she made the kill and this tom made a quick getaway with it, or perhaps it was rightfully his kill and she thought she might try her luck at getting in on the meal. After following the pair of them for a while, the male leaped, impressively, into a suitable tree and stashed his prey safely in its branches. Cleo stayed hidden in the shadows, obviously wanting to avoid confrontation. Smart move! Turning our focus to the large mammals reveals just as much in terms of how lucky we have been. And speaking of luck, the long Easter weekend started with one earth-shattering downpour! After a million rain dances, we were finally rewarded with some serious bucketing-down rainfall, if only for a brief time, and the impact it had on the landscape is incredible. Mud wallows popped up all over the show, and with the full waterholes and inviting puddles, elephants and buffalos flocked with gratitude. We watched some very excited elephants kneeling, face-planting, in the mud and flinging trunkfuls over their heads. The buffalo came in herds, large and small, gathering at waterholes and munching on the greenery. The sunset glowed deep orange through the trees, bathing the ferocious animals in mesmerising light. Moody skies predicting rainfall turned the skies a deep purple, and the slithers of sunlight sliced through the clouds, creating the perfect backdrop for a tree full of baboons, which ended the day’s sightings just perfectly.