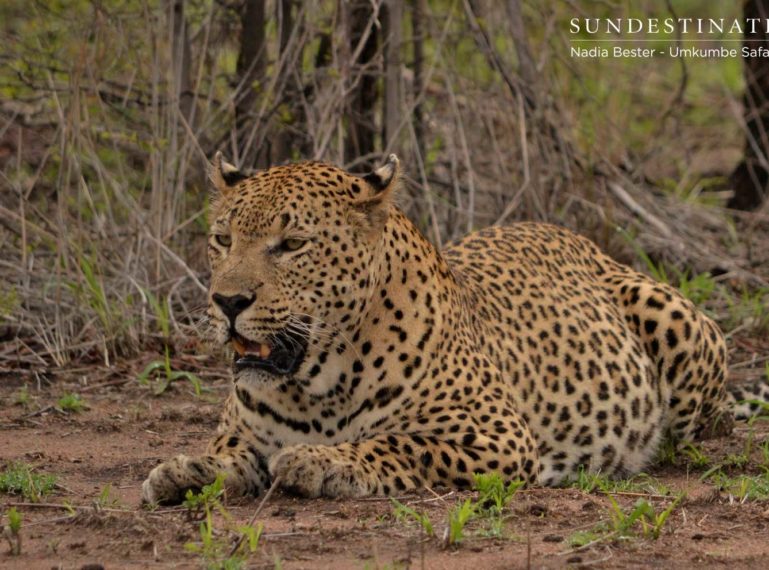 Mxabene patrols his turf around Umkumbe Safari Lodge with the swagger of king and relaxed confidence of a born leader. This tom cat reminds us of an ancient ancestor that rule over the surrounding lands. Max, as he is fondly known, protects his turf with vigour and wards off any intruders with ferocity, true to the nature of a mysterious leopard. Over the past few weeks the Umkumbe team have seen him relaxing under the thickets, completely unfazed with the presence of game viewers. Despite his seemingly relaxed position, if there was a sense of danger, Max would pounce faster than Flash Gordon attempting to save the world. Over the past couple of days, Max provided Umkumbe guests with an action packed sighting. Nadia Bester supplied us her version events accompanied by her award-winning photographs, yet again.

On Tuesday evening we watched Max assuming a rather statuesque position on the edge of a drainage line. There appeared to be a kill just below where he was relaxing and he eventually moved down to enjoy his meal.

When leopards conduct a kill they’ll normally escape up a tree to stash their hard-earned meal for safekeeping if they feel harassed by scavengers and other opportunistic predators.  Clearly Max felt no immediate threat, so simply kept the kill out of sight while taking a breather from his hunt, during which plenty of energy is used. Make no mistake, although relaxing he was on high alert while guarding what was potentially a delightful carnivore feast.

On Wednesday morning the hyena clans stole the kill. Max waited patiently in the wings, eyeing out the scavengers. Eventually the hyenas moved off and Max took back what was rightfully his. Unlike lions, leopards make their meals last a few days and hoard their prey, whereas lions will gorge themselves. Leopards have the capacity to drag kills heavier than themselves up into trees for safekeeping, whereas lions cannot do not possess such agility. On Wednesday evening, Max was spotted hoisting the waterbuck into the fork of the tree, ensuring that his hard earned was not going to be stolen for the second time around.

Max, as he is fondly known, is our very own action hero. He made the kill, saved the kill and rescued the kill! Waterbuck don’t have the best tasting meat – their skin secretes an oily solution which is rumoured to give the meat an off taste to predators. But being opportunistic, Max decided that a meal is a meal. Our mad Max is most certainly one of the most loved toms in the area and this two day consecutive sighting of him was one for the books.