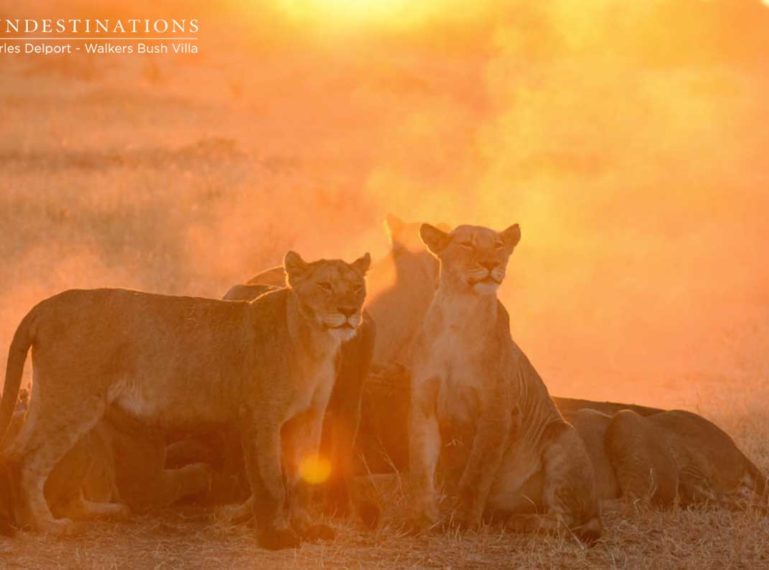 When lions identify a potential source of prey, a well-thought out plan of action takes place before the ultimate graphic showdown. Witnessing a pride of powerful lions executing a kill of their mobile meal is like watching a horror movie in action. Crimson tempers flare in the middle of fine dust clouds while the target of the attack desperately fights for survival, pushing hard against the threat of death. In the bushveld there is always the fine line between the brutal and the beautiful – it’s the way of the wild.

Lions have a habit of taking down general game or target the weaker individuals within buffalo herds. These choices of prey are the norm, but lions can be opportunistic and will ambush whatever prey presents itself. This is exactly what happened in the Timbavati Private Nature Reserve a few days ago when the team witnessed a remarkably unusual event.

Guests from Walkers Bush Villa and Walkers River Camp witnessed the Giraffe Pride of lions grappling and tackling a giant hippo. Villa manager, Shirell Lynch, said that it was a once in a lifetime sighting for their team. The Timbavati is renown for its unique predator activity and abundant cat sightings, and certainly lived up to its reputation with this unusually graphic and turbulent sighting.

When a lioness locks eyes on an unsuspecting target and signals to the rest of the pride that it’s “Go Time”, the individuals take up various positions ensuring that all angles are covered and target is surrounded. Then it’s the stalk, a scuffle and an ambush.  Watching a pride in action makes you realise the sheer power of these cats! Most of the time we spot the pride in the after glow of a kill or dining on the remnants of their prey. To see a full kill in action or part of the take down, is a privilege. Both the Walkers River Camp and Walkers Bush Villa guests were in an enviable position.

Shirell gives us a detailed account of the event.

“The sighting was after dinner. Charles and I heard the hippo fighting off a pride of lions close to the villa. We jumped in the vehicle and went out to find them. By this stage, the pride had taken down the hippo. The hippo fought for its life for over 1.5 hours while the lions were trying to suffocate it, and eat it at the same time! We went back to the camps and picked up the guests to show them the sighting. Our photos depict what the guests saw. We went back the next morning and the greedy lions had already finished the mammoth carcass! This was the first time that any of us had seen a lion pride take down a hippo!” 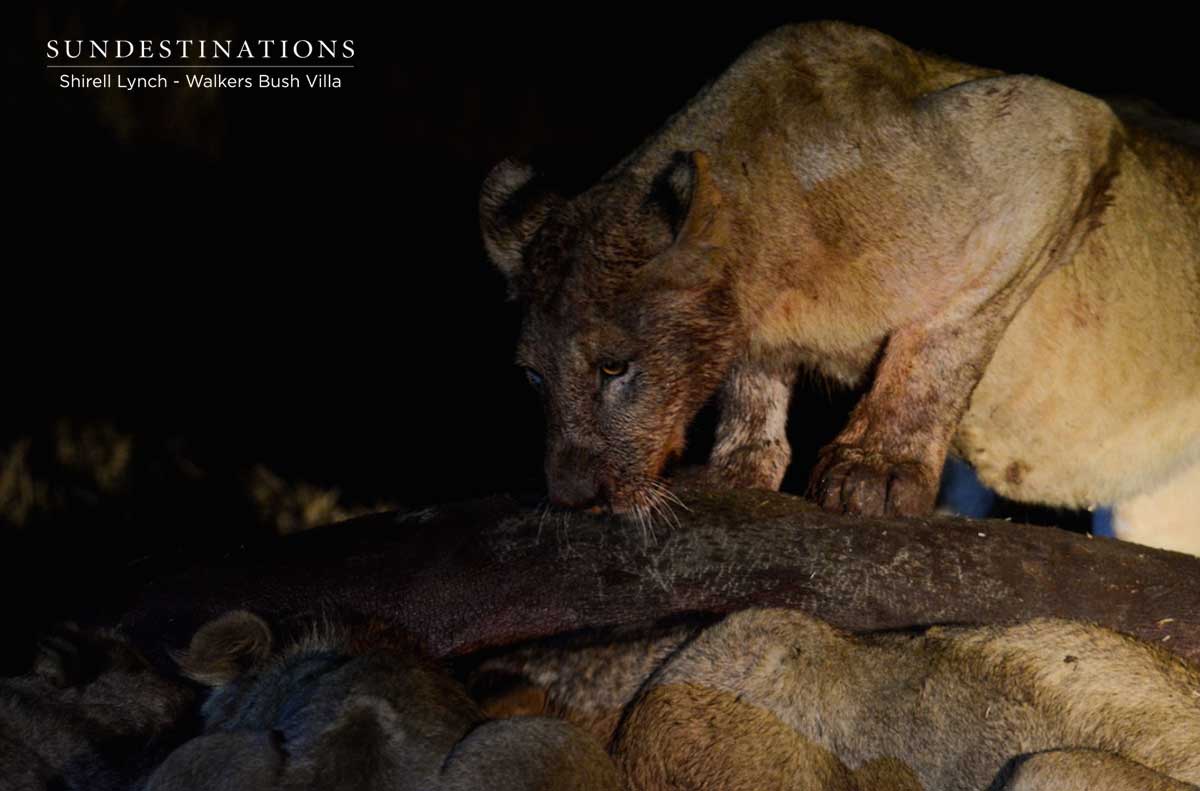 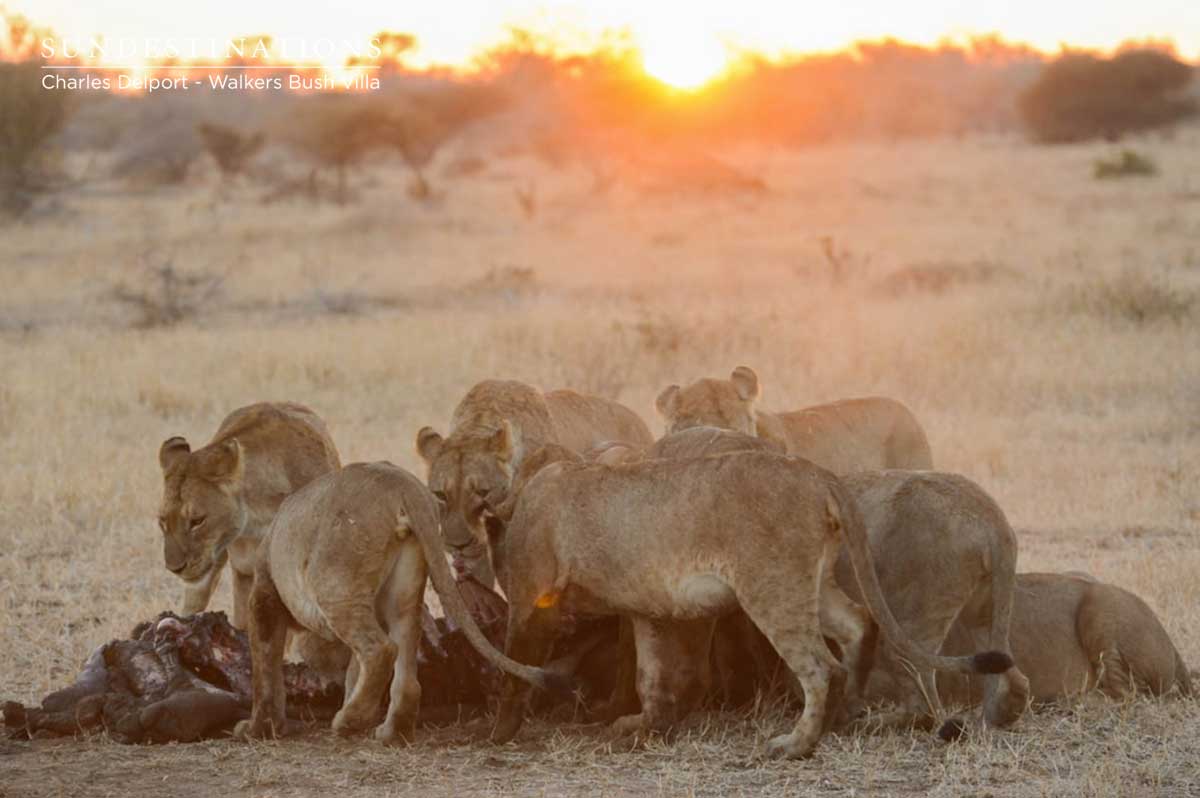 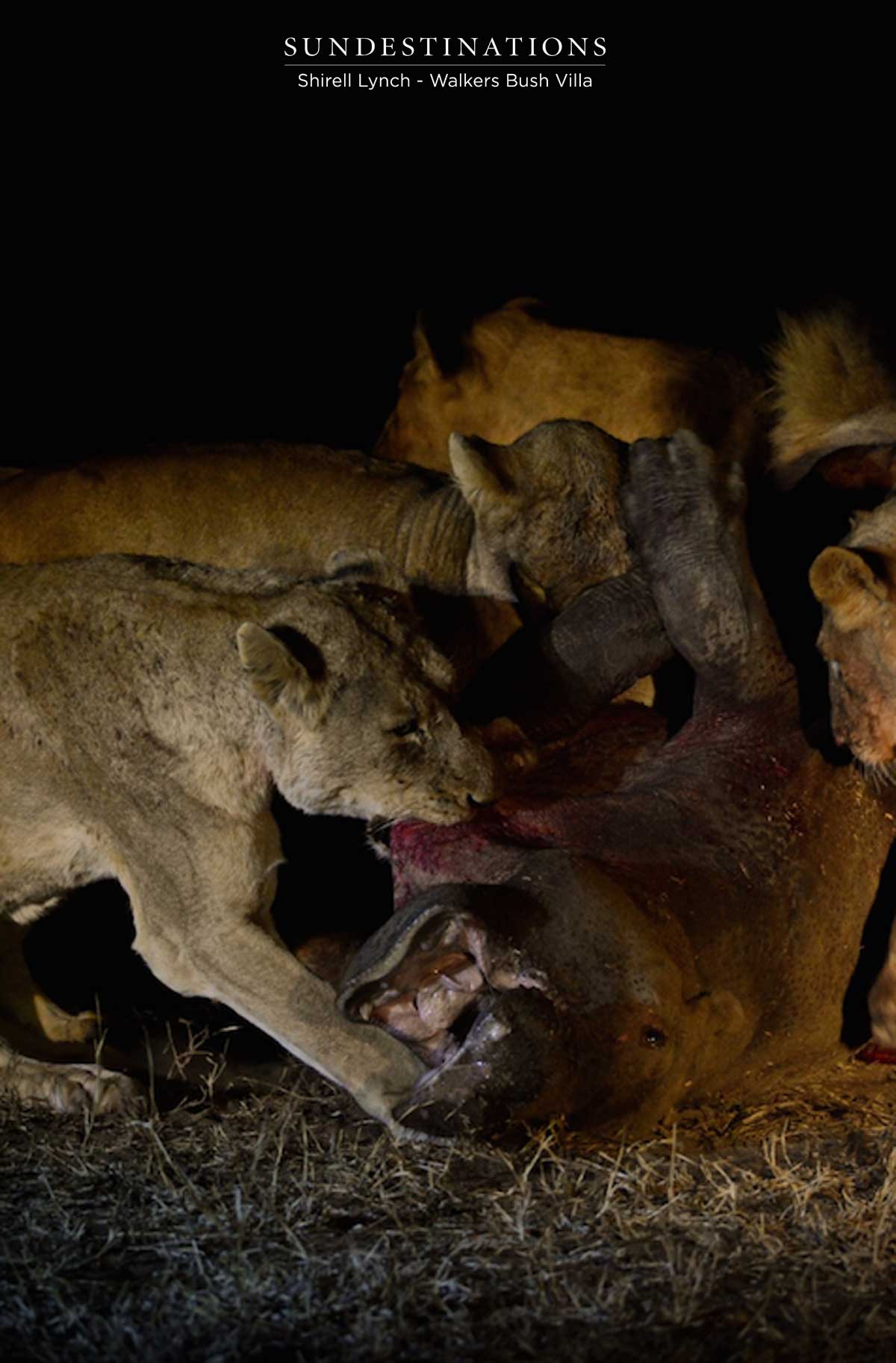 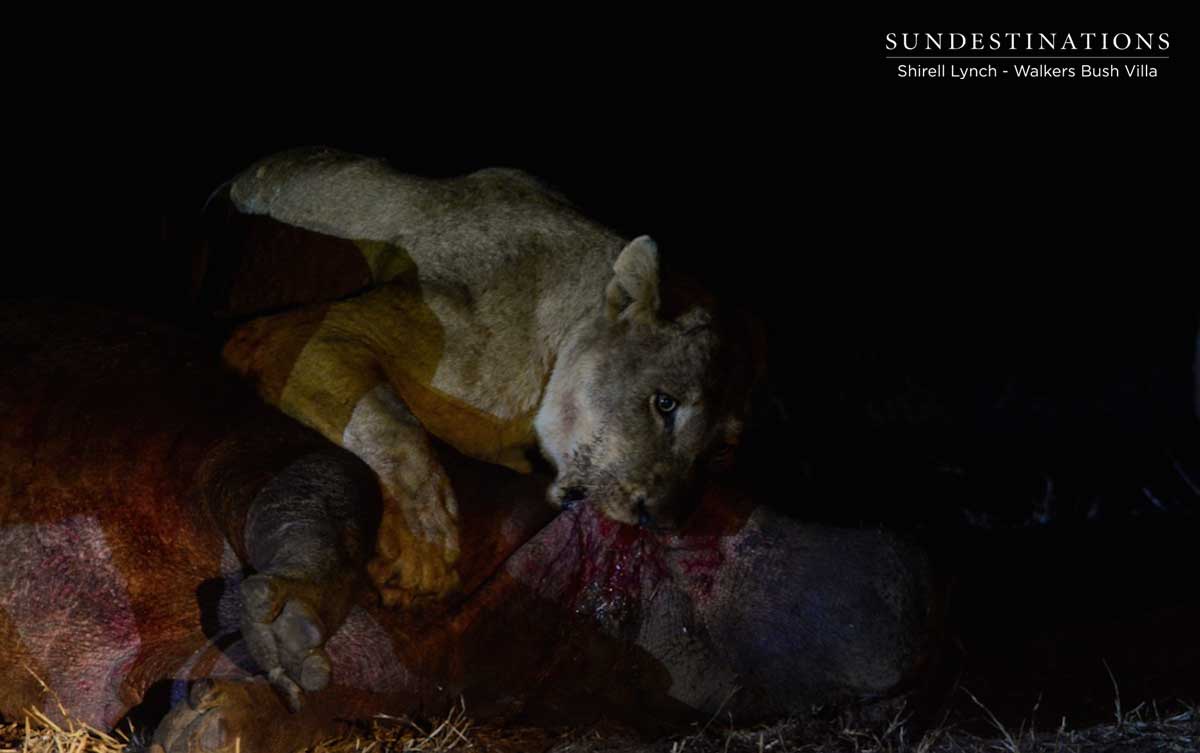 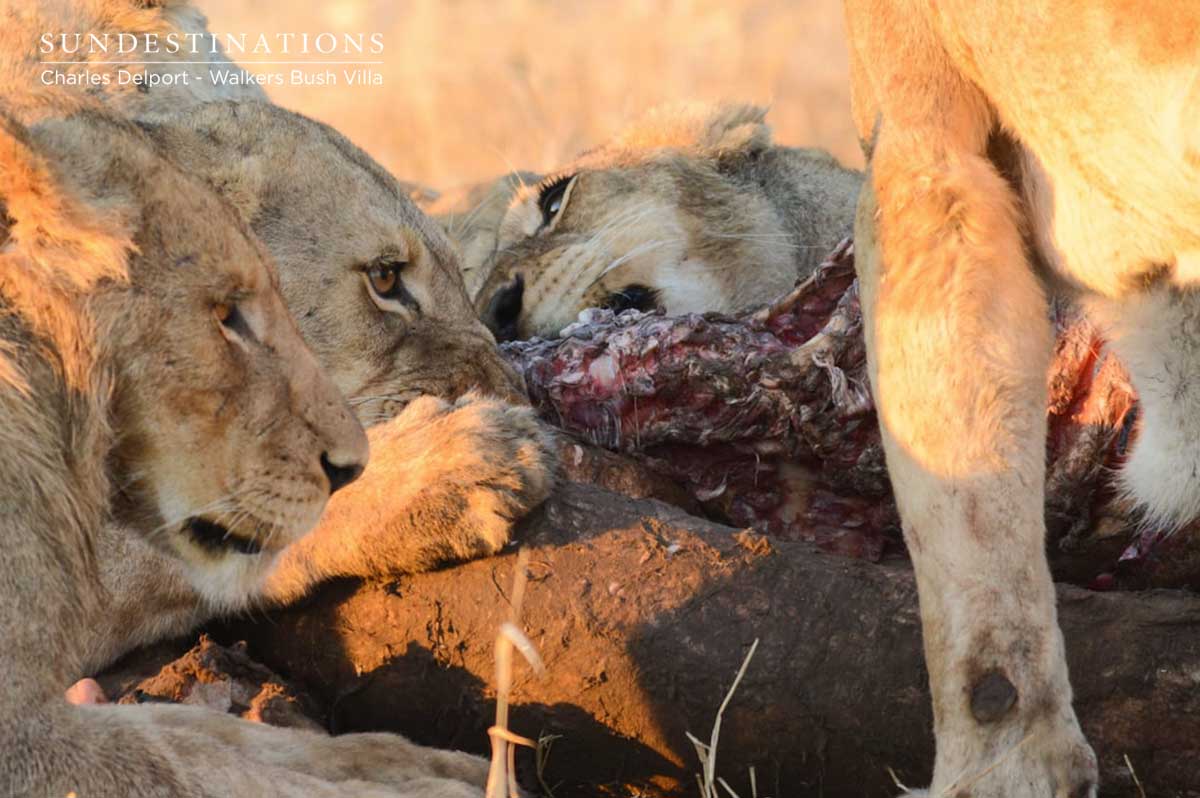 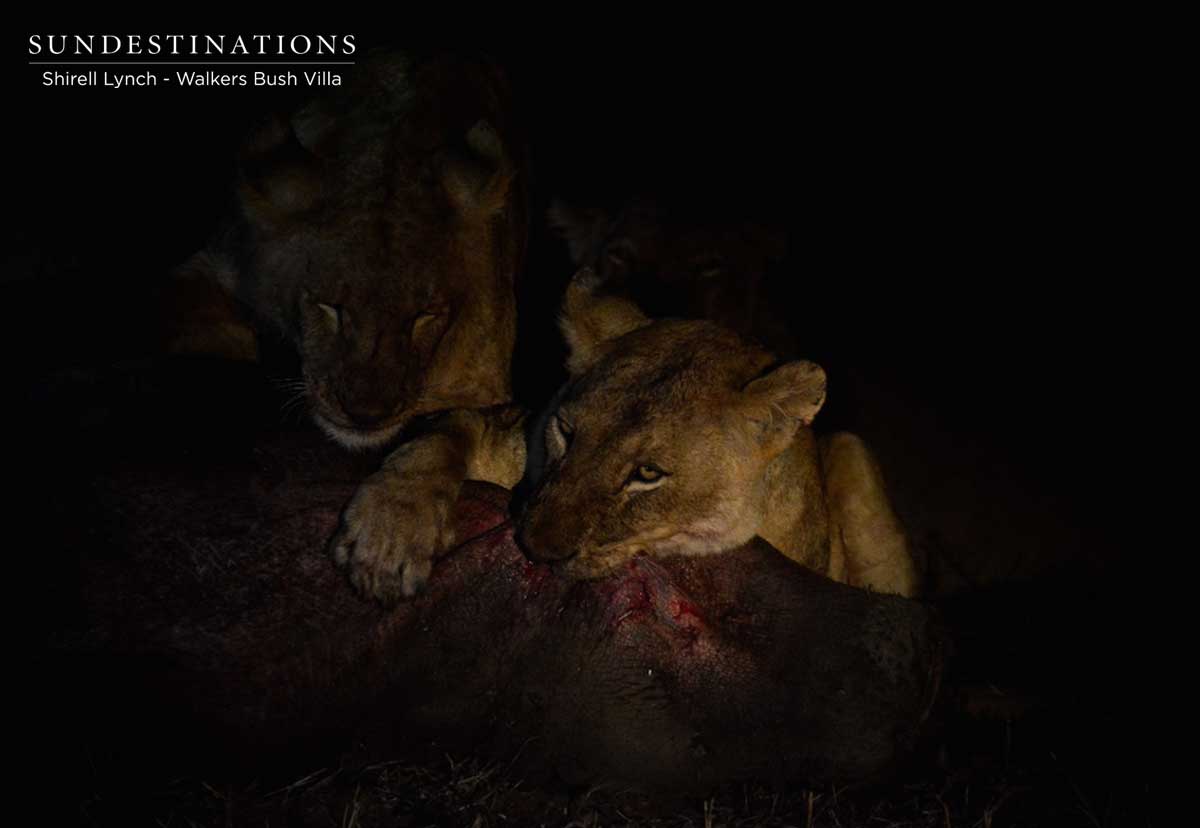 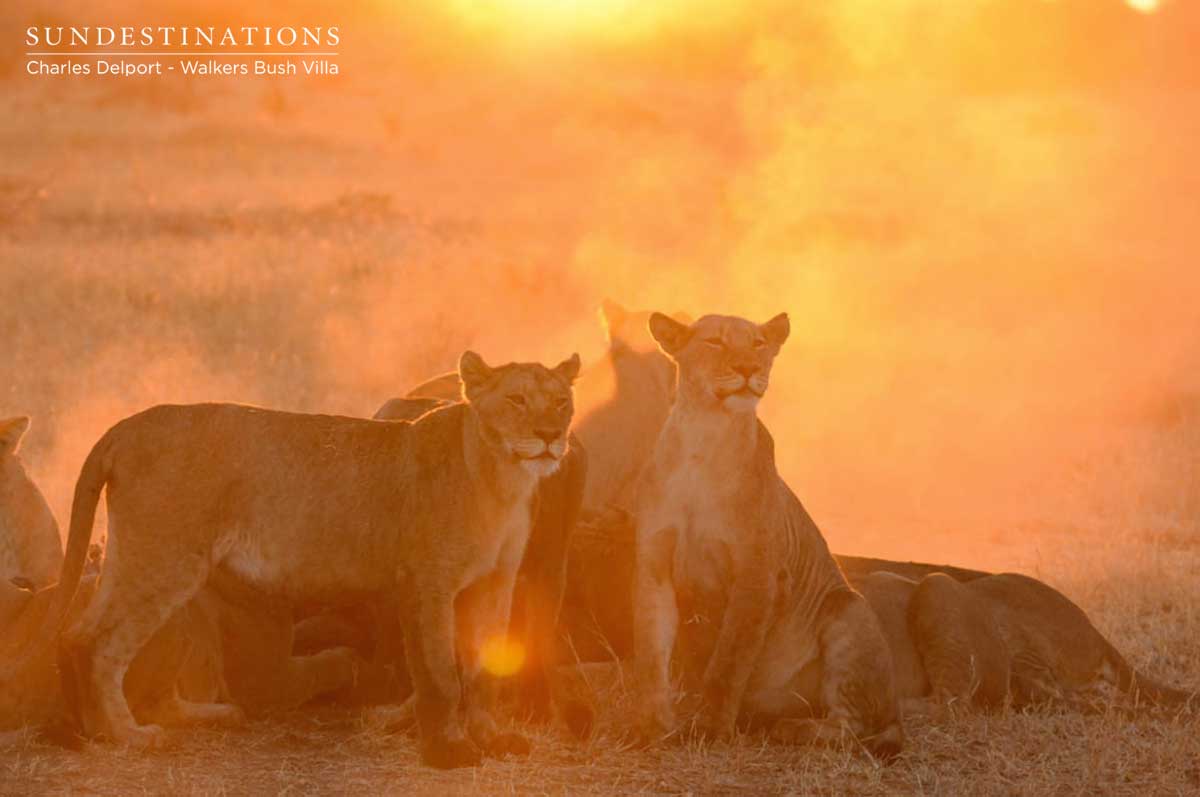