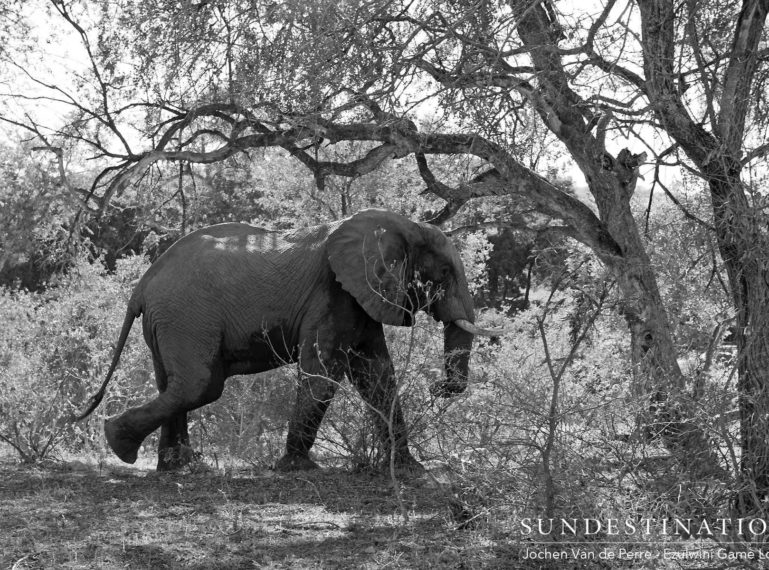 The Balule Nature Reserve is home to Africa’s big five and an abundance of species you’ve probably never heard about. On a daily basis, gentle herbivores and powerful predators grace us with their presence. Wildlife often exhibit a set of behaviours which are carefully studied by rangers and trackers. While one can never predict what happens in the wild, we can speculate based on previous behaviour.

When the game viewer is bumping along during the night game drive, it’s quite hard to see what’s happening a few metres away from you. The stars are the only source of natural light. Finding that elusive leopard while you’re listening to the distant rumbling of elephants and roaring of lions can be a tricky task.

But, when we’re out of sight, out of mind, it appears the wild comes alive. We miss so much with our less than perfect senses. The Ezulwini team set up a camera trap to capture the moments we don’t get to see. The camera was set up in a high traffic wildlife area and the results have been astounding. The next idea is to set up the camera at the lodge so we find out what happens while we’re fast asleep.

During the cooler times of the year, you’ll see hippo basking in the sun on the banks of a river or waterhole. Due to their colossal size, they actually conserve a huge amount of energy while in the water, which is where you’ll most likely spot them.

What we’re seeing in this video is a hippo emerging from its dam at night, when they’re most likely to emerge from their comfort zone.  It’s cooler during the night and they use this time to feed and forage on land. Pods normally split up and follow well constructed paths that weave through areas rich in nutrients. Clearly this hippo found the trail cam during its foraging session!

The predators, both large and small, stole the limelight with this camera trap session. The carnivorous banded mongoose, which is normally a diurnal species, was spotted hunting for insects. Genet cats, a lone civet and curious porcupine approached the camera during their scavenging session.

A huge breeding herd of elephants were making their way down to the waterhole to drink, to get their daily quota of water, which can be up to 200 litres a day. They seemed oblivious to the secret hidden camera and went about their daily herbivore business.

A hippo and its calf return to safety of the dam after spending time foraging in the dark. In the same scene, a small pride of lions traverse across the thickets in search of potential prey. These nocturnal cats use the cool, dark hours to hunt and we suspect they were traversing far and wide in search of plains game.

On a separate occasion, a weary bull elephant decided to take it upon himself to dislodge the camera. Perhaps this intelligent pachyderm knocked the camera over while dislodging a tree. After all, an elephant most certainly needs a scratching post! The African elephant is the largest and heaviest mammal, so we’re lucky there wasn’t significant damage done to the camera.

An array of diurnal species visit the dam

Waterbuck, birds, kudu and all the browsers came to inspect the camera. While some of the plains game were just filtering down to drink, the others were a bit more inquisitive. Yet again, the elephants can be seen trundling past the trails cam en route to their “swimming pool”.

Then of course, you spot the highly sociable and cheeky baboon troops darting between trees. After the suspicious bird pecked at the camera, one of the baboons clambered over it. And then of course, the vervet monkeys couldn’t possibly miss out on this spectacle, so they also joined the party.

Stay tuned for our next big reveal from Ezulwini’s hidden camera trap! What will wildlife get up to in the depths of the dark night? Only time will tell….