Klaserie Walking Safari : What to Expect 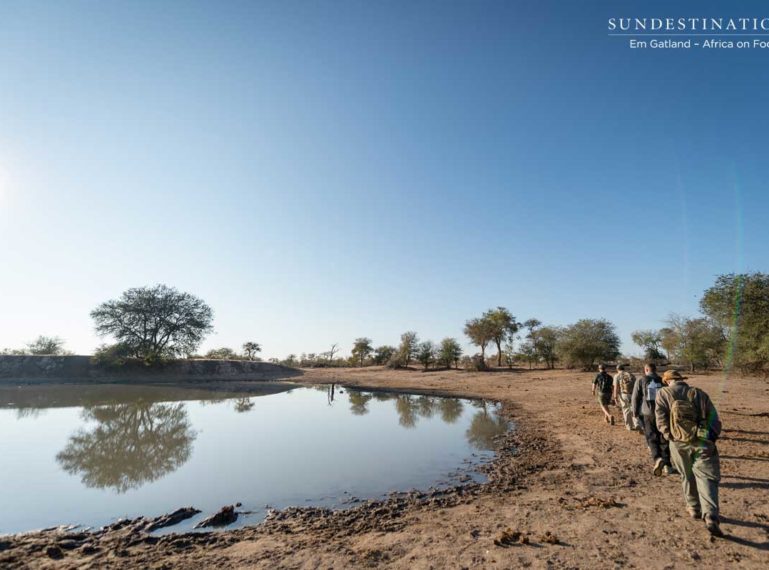 There are parts of Africa best explored by foot. Discovering the continent with nothing between your feet and the earth, transports you back to the beginning of time. However, it’s not always safe and possible to explore the spoils of this land by foot; unless you join Africa on Foot for a walking safari that will take you back to your roots. In the words of Thabo Mbeki,  “I am a child of Africa, Her mountains, open veld, grass and rugged bush remain a big part of who I am. The continent has shaped me and left me believing that there is a little bit of Africa in all of us.”

Africa on Foot is the home of the big five walking safari. An uncrowded reserve peppered with medicinal shrubs and low-lying grasses makes it ideal terrain for walking. The thick mopane woodlands, marula trees and leadwoods provide the perfect scratching posts, edible vegetation and hideaways for herbivores and carnivores alike. Deep within the thickets dwell the big five, who often make an appearance for visitors to the reserve.

Em Gatland, one of our wildlife photographers spent time exploring the Klaesrie on foot with the rangers. She produced a series of images that capture the essence and atmosphere of a walking safari. In the early hours of the morning, at 5:30, a compos mentis ranger will knock on your door for a wake-up call. After coffee and rusks, you’ll head out into the wild bush. Before you set out, make sure you have a few bottles of water with you, as it can get quite warm as the mid-morning sun beats down. It’s not a strenuous walk and although it’s 3 hours, it’s mainly walking through flat, sandy areas dotted with scrub.

The walking routes are well-known and they weave through low-lying thickets and occasional trees. Guides don’t generally take you into heavily wooded mopane areas because you cannot see what’s in front of you. And nobody wants to come face to face with a buffalo bull or pride of lions.

You learn as you go when you’re on a walk. As you stroll past the medicinal plants your ranger will stop to chat to you about the many uses of that particular plant. He may even get you to sample the leaves! You’ll also be quizzed about various tracks and how to distinguish between cats, dogs and ungulates. So what happens you come across wildlife? Before your walk commences your ranger will explain the rules of walking in the bush. There are a few key elements which should be adhered to – just to ensure everybody’s safety. Key rules are: silence is golden, single file is a must, there should be no sudden movements and you must only communicate via hand signals. This ensures you know what to do when wildlife is approached. For example, rhino have a keen sense of smell and poor vision. You can get up close but cannot move and must remain hidden. Movement, together with the blowing wind, can cause your smell to be detected. Occasionally you’ll stop when your ranger hears a rustling sound. With excited hand signals he’ll tell you to get down (we hope you can do squats!) and move to an area of safety. Plains game and predators all have different ways of surviving in the wild and your ranger is fully aware of how to cope with confrontations.

Here are five useful things about the wild Em Gatland and others have learnt while out on foot:

Anyway, we certainly hope we haven’t given away too much information. The animal facts we’ll save for the rangers. Join us for a walking safari in the Klaserie and let our rangers teach you how to survive in the wild.