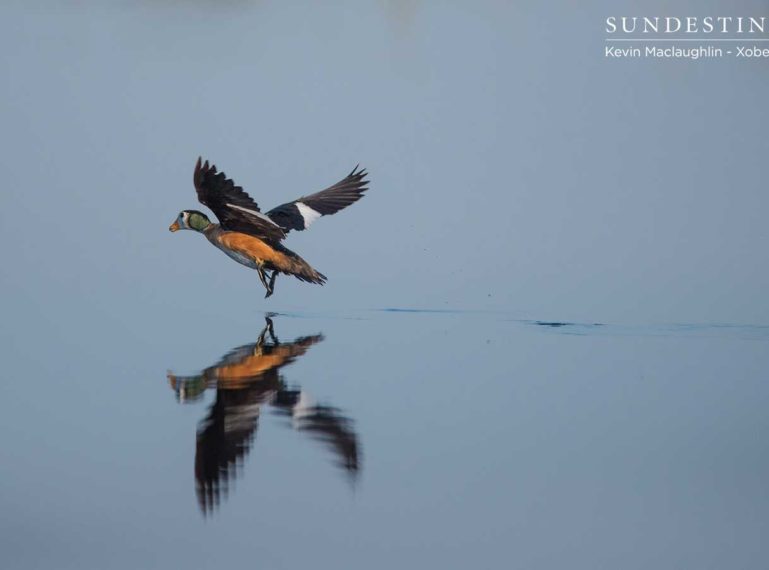 Botswana is a mecca for birders across the globe, who flock to the country to seek out wildfowl, waders and lifers. A bird sighting is always a guarantee – even if it’s a common southern yellow-billed hornbill, the one thing that we can guarantee while on safari is a bird sighting! The Okavango Delta, with its intricate network of channels and waterways, provides the ideal habitat for over 550 species of bird. Just recently, our photographer Kevin MacLaughlin took to the channels and stumbled across a colourful array of birdlife. While staying at Xobega Island Camp, which is located on an island in the Okavango Delta, guests can enjoy plenty of water safari activities. A prime destination for twitchers flying in from around the world. These are our most recent sightings of birds spotted during one water safari excursion.

The malachite kingfisher is an exceptionally good looking bird. With its colourful plumage and glossy good looks, it reigns over the reeds of the Delta with a sense of pride. Its razor sharp beak is perfectly equipped for piercing its prey, which comprises amphibians and fish. It has an unusual flight pattern that sees its wings spinning rapidly in a blurry whir. Flight is in short, jagged bursts and it flies low over the water. When nesting, the malachite builds a tunnel-like structure in a sandy bank close to water. Look at the base of the reeds for speckles of colour and a whirring of wings – there you’ll find your malachite. The pied kingfisher is a rather classic looking bird and easily recognisable due to its stark black and white markings. This powerful and minute bird is yet another beauty that hovers over the pristine waters of the papyrus-lined Okavango Delta. This bird is lightning fast and flies low over the calm waters trying to detect the slightest movement below. When it spies a target it will do a vertical drop, bill-first to stab its prey. Their flight pattern is streamlined and quick; and they are known to reach speeds of up to 50km per hour!  They even have the capability of eating their prey while mid-flight, so they don’t have to return to their perch. An accomplished and skilful kingfisher – one to watch out for! The African jacana gives the impression that it can walk on water. This wader lightly and delicately dances across the surface of the placid channels and open waters of the Delta.  Its long toes and claws enables the bird to walk on floating plants and vegetation. The jacana prefer shallow waters and enjoys a diet of insects and invertebrates. You’ll find the jacana dwelling in shallow, swampy areas and  navigating its way through thick reeded areas. The pygmy goose is an attractive bird and its facial markings are clearly outlined by what looks like black liner. Golds, greens and whites stand out against its tawny plumages and dark wings. This “goose” is actually a duck although it has the bill of a goose, its behaviour is more like that of a dabbling duck. This is evident in their love of surface dwelling insects and seeds from water plants. These wildfowl pair off to mate during the rainy season and enjoy a bond with just one partner, which means you will often see a mating pair during the wetter times of year. The squacco heron is a small brown heron with a distinct streaked head. During the breeding season, its black and white crest becomes more prominent. This widespread pond heron has a shrill squawk and favours fresh marshes where it can see its prey clearly. This wader assumes a statuesque position while on the hunt for prey. When its quarry is identified, it goes in for the kill!