The Klaserie’s Starlit Skies Are No Constellation Prize! 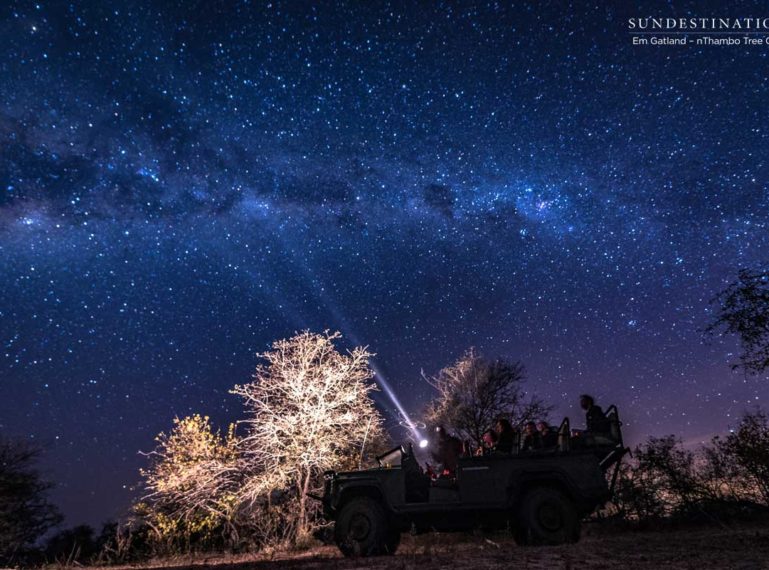 When darkness falls, the bush comes alive. Nocturnal predators can be heard rustling in the thickets and plains game become skittish. This is the time when the big cats hunt and the rest of the animal kingdom seeks refuge. The black canvas above is thick and heavy; only to to be broken by the millions of bright stars which illuminate the land below. With zero interference from street lamps and man-made light, the galaxies above appear to hover close to the ground. The nights in the Klaserie are wild, uncontrolled and mesmerising. After all, there’s beauty in chaos and the unknown… Photographer Em Gatland took her finest lens out on game drive with Africa on Foot and nThambo Tree Camp. She captured the mysterious chasm between day and night. From the minute the sun said a quick and angry farewell to the day, the night charged in with its bold black paintbrush. The forthright stars appeared, pushing their way through the blackness above. A black palette littered with specks of gold. Welcome to the beauty that is the Kruger sky.

The Southern Cross asterism and the Milky Way galaxy are the two most recognisable patterns in the night sky of the southern hemisphere. The rest of the constellations lie huddled around the phase of the moon, worshipping its royal like status. While trackers and rangers searched low for wildlife, Em and her camera pointed high to photograph the action of the night sky.

Wildlife and stars are actually in sync with one another. Have you ever seen an animal use a map? Most certainly not! Did you know that certain birds, seals and even the dung beetle use the stars to navigate? The dung beetle uses the Milky Way to navigate. Most animals, however, use a combination of the sun, the earth’s magnetic field, the polarisation pattern of the blue sky, vision, scent marking and navigational cues to find their way. Did you know? There are 88 official constellations and 48 of them are original, which means they were discovered by ancient civilisations. All stars have two names, the first is Latin and the second the “recorded” name. The Latin is descriptive and gives an indication of the constellation and how brightly the star shines. To all the avid Astronomers out there, here are a few things to spot while star gazing in the Klaserie.